It’s not leadership or combat culture driving pilots out of the service.

For months, senior U.S. Air Force leaders have issued dire warnings about the shortage of pilots, citing a 2,000-aviator shortfall.

The Air Force has just 18,000 of the roughly 20,000 pilots it needs to crew its 5,500 fighters, bombers, airlifters, cargo planes, and rescue helicopters. This 10 percent gap in its air crew requirement could "break the force," Air Force Secretary Heather Wilson warned last November.

Yet the current manpower gap is just the latest in a boom-bust cycle in the Air Force's ability to hold on to highly skilled aircrew. The Air Force has suffered serious pilot shortages no fewer than six times since its founding in 1947 -- in the early 1950s, the late 1960s, the late 1970s, the mid-1980s, the late 1990s, and the early 2000s, according to official records, experts, and news reports.

For months, senior U.S. Air Force leaders have issued dire warnings about the shortage of pilots, citing a 2,000-aviator shortfall.

The Air Force has just 18,000 of the roughly 20,000 pilots it needs to crew its 5,500 fighters, bombers, airlifters, cargo planes, and rescue helicopters. This 10 percent gap in its air crew requirement could “break the force,” Air Force Secretary Heather Wilson warned last November.

Yet the current manpower gap is just the latest in a boom-bust cycle in the Air Force’s ability to hold on to highly skilled aircrew. The Air Force has suffered serious pilot shortages no fewer than six times since its founding in 1947 — in the early 1950s, the late 1960s, the late 1970s, the mid-1980s, the late 1990s, and the early 2000s, according to official records, experts, and news reports.

“There is a cyclical pattern of pilot overages and pilot shortages within the armed services,” says Brian Laslie, a historian and author of The Air Force Way of War.

Pundits and even some pilots have tended to blame the Air Force’s culture and other less tangible causes. Navy pilot Lt. Jack McCain claims that Air Force pilots “are not provided the opportunity for meaningful leader development.” Mike Benitez, an Air Force fighter pilot, insists that a demoralizing “erosion of the Air Force’s combat culture is the real reason fighter pilots are leaving.”

Leaders say training more pilots, and keeping experienced pilots longer, will allow the Air Force to ease up on deployment rates for the wars in Iraq, Syria, Afghanistan, and elsewhere, thus alleviating some of the stress that contributes to aviators quitting the military for the airlines — even if the military can’t hope to actually match private sector pay and benefits.

But leaders haven’t publicly admitted that the most important thing the Air Force could do might be to simply hang on and wait for the economy to slow and airlines to cut back on hiring. That, more than any other factor, helped alleviate past pilot shortages.

In almost every case dating back to 1950, the Air Force’s aviator shortfalls coincided with aggressive hiring by airlines. As market conditions worsened and the airlines cut back, the Air Force’s own retention woes eased.

In the 1990s in particular, a booming economy made it hard for the flying branch to keep pilots. In 2015, Nolan Sweeney — an analyst with the Rand Corp., a California-based think tank with close ties to the Air Force — graphed airline hiring against the Air Force’s pilot losses from 1996 to 2012.

“[A]irline hiring provides an escape valve,” Sweeney explains in the report. “As the number of hires or the salary of commercial airline pilots increases, the escape valve widens, inducing more pilots to leave.”

The relationship between the civilian pilot market and Air Force pilot retention goes back decades. The U.S. Army Air Corps became the Air Force in 1947. The first pilot shortage struck three years later at the outbreak of the Korean War in 1950.

The problem was that tens of thousands of pilots had voluntarily left the armed forces as the United States demobilized at the end of World War II. Not coincidentally, airlines were enjoying a huge postwar boom.

To fill the gap, the Air Force brought back some retired World War II combat pilots who weren’t already flying airliners and grew the training infrastructure for new crews. “[T]he ‘scramble’ was on to build a pilot force capable of meeting the demands,” Lt. Col. John Rhodes explains in a 1985 study of pilot shortages for the Air Force’s Air University in Alabama. 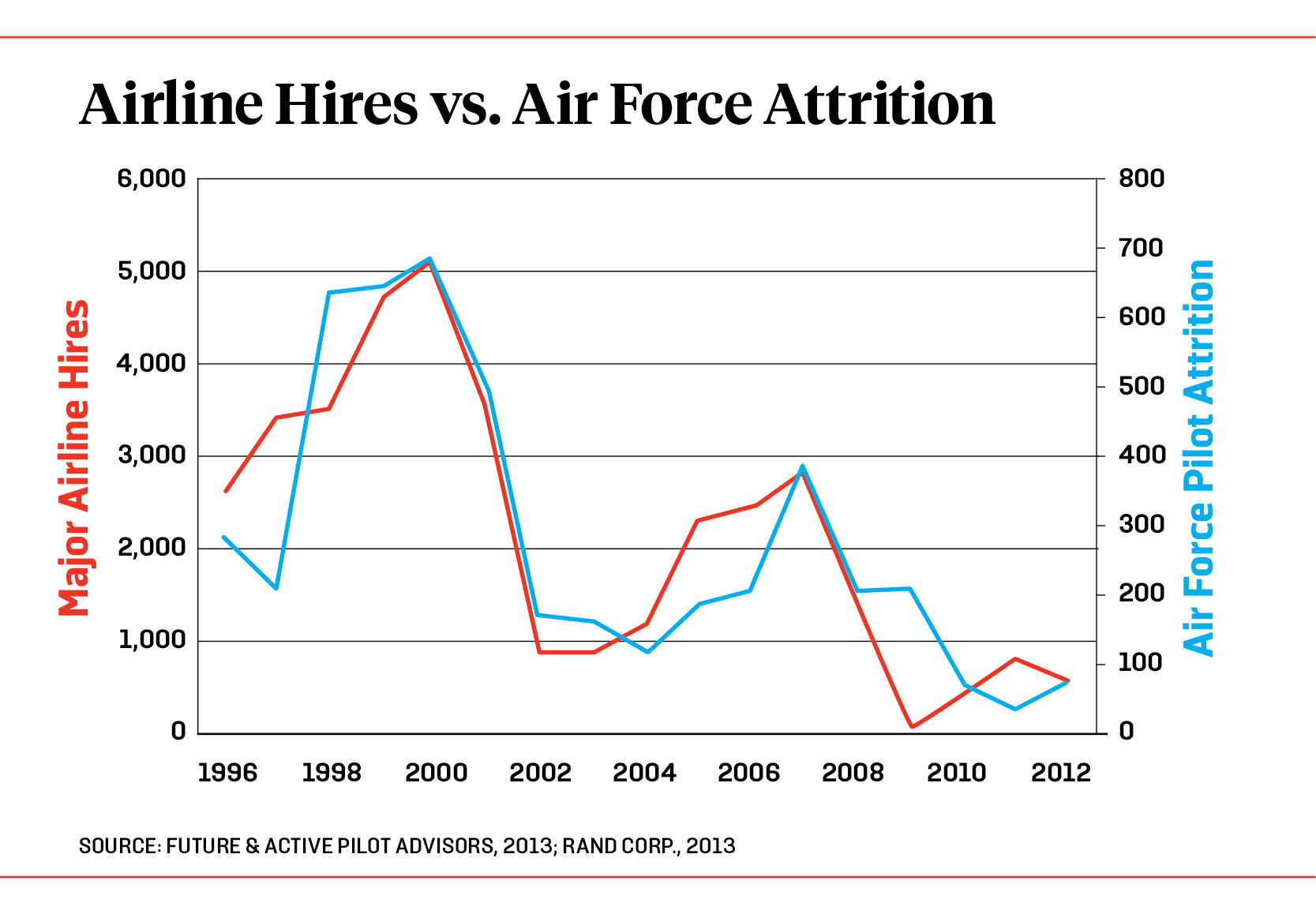 By 1966, the Air Force actually had a pilot surplus. The active-duty force needed 38,000 pilots, according to official statistics Rhodes compiled. In fact, it had 40,000.

The Vietnam War, and a second postwar expansion of commercial air travel, changed all that. To meet the relentless demands of a major overseas war, in 1967 the Air Force needed 46,000 pilots, but owing to strong private sector hiring it had only 38,000.

That 8,000-pilot gap — 17 percent of the requirement — is the biggest in Air Force history. The current shortage is around half as bad, adjusting for today’s smaller force.

In 1967, the Air Force solved its manpower problem in part by increasing new pilot production from 2,000 annually in 1966 to 3,500 in 1970. The service also instituted a new rule: No pilot would do two tours in Vietnam until every pilot had completed one. That eased the stress on individual pilots.

Not surprisingly, a slowdown in private sector hiring was also a critical factor. In 1970, the airline industry — struggling with slipping demand and rising fuel costs — lost money for the first time since 1962, according to statistics compiled in 2013 by Paul Stephen Dempsey, then the director of the Institute of Air & Space Law at McGill University in Montreal.

The pilot gap shrank to just 300 by 1971. With the U.S. drawdown in Vietnam and continuing softness in the commercial market, the aircrew deficit became a 2,800-pilot surplus in 1972.

President Ronald Reagan’s military buildup in the 1980s added 2,000 cockpit positions to the Air Force between 1980 and 1988. But by mid-decade, the economy was strong, and airlines were hiring. The service was, on average, 800 pilots short of its 25,000 aircrew goal for most of the 1980s.

Then, with the end of the Cold War, the Air Force retired thousands of aircraft and shuttered hundreds of bases. In 1994, the service had 750 more pilots than it needed. The military was firing; airlines were hiring. Pilots left the Air Force in droves, and by 1998 the flying branch was once again short aircrew.

To dig itself out of today’s aircrew hole, the Air Force is offering cash incentives, cutting back on pilots’ paperwork and other nonflying duties, and expanding the training pipeline so it can produce as many as 1,400 new pilots per year, compared with just 1,200 now.

Those kinds of initiatives have worked before to help close aircrew gaps. The trick, of course, is paying for it. Congress approved a roughly 10 percent budget boost for the Defense Department in 2018. The military wants another 6 percent increase for 2019. Those budgets require Congress to pass temporary exceptions to the 2011 Budget Control Act and its automatic sequestration budget cuts.

“If we go through sequester again, a 2,000-pilot shortage will be a dream,” Wilson said last year. “People will walk.”

The one thing the Air Force and Congress can’t control is the market for commercial air travel. And that market, more than any other factor, drives the military’s own pilot retention booms and busts.

The bad news for the Air Force is that, at present, airline hiring is strong all over the world. So strong that “you might find the same pilot shortages in other air forces, as well,” Laslie says.

Sweeney at Rand predicted that the Air Force would suffer high levels of pilot attrition through 2020. A 2017 study by the U.S. Government Accountability Office anticipated a shortfall through 2023. The most pessimistic projection came from Air Force Lt. Gen. Gina Grosso, who in March 2017 told the House Armed Services Committee that strong airline hiring could continue “for the next 10 to 15 years.”

Dempsey’s figures show airlines slipping into a roughly two- to five-year period of overall net loss about every six years between 1958 and 2007. The industry has been profitable since a steep drop in fuel prices in 2014. History points to a downturn, perhaps sooner than the Air Force anticipates.

The Air Force survived past pilot shortages, and experience indicates that it can survive the current crisis. If history is any guide, the best measures the Air Force can take to solve its pilot problem are to train more aircrews, reward existing crews for staying longer, and ease up on combat deployments.

But there’s something else the service must do: The Air Force must wait for the airline industry to take a downward turn and make military service more attractive in comparison.

If the Air Force pays more, trains more, and, as a result, can cut back on deployments — and waits — it might soon find itself with too many aviators.

David Axe is a freelance reporter based in Columbia, South Carolina. Since 2005, he has reported from Iraq, Afghanistan, Lebanon, Somalia, Chad, Congo and other conflict zones for Wired, the BBC, Salon, Esquire, and others. He is the author of, most recently, The Accidental Candidate. Twitter: @daxe
Tags: Military, National Security Agency, United States, War

NEW FOR SUBSCRIBERS: Want to read more on this topic or region? Click + to receive email alerts when new stories are published on Military, United States