Shady tactics failed to pay off in a divisive abortion referendum.

In the run-up to Ireland’s abortion referendum, amid heated campaigns that exposed some of the country’s deepest divides, a group of 20 journalists from a wide range of Irish media gathered in a small office in Dublin. They were one part of a collective, informal, and successful effort, led by journalists and activists, to protect the country from the barrage of misinformation and propaganda online that had poisoned events in other countries, including the United Kingdom’s Brexit vote and the 2016 U.S. presidential elections.

An array of international groups, both anti-abortion and pro-abortion rights, saw the island, with just 4.7 million people, as the front line of a wider ideological battleground. In particular, right-wing anti-abortion groups in the United States were keen to maintain what they saw as one of the last bastions against abortion.

One of the main vehicles for foreign groups was Facebook ads that microtargeted Irish voters. In response, citizen volunteers established the Transparent Referendum Initiative (TRI) to catalog the ads targeting voters. The data was crowdsourced from a group of 600 volunteers, who added a customized extension to the Google Chrome browser to collect the Facebook ads targeted at them.

The Dublin meeting focused on tackling this huge dataset. The journalists collaborated with the Irish social media group Storyful in order to turn the information processed by TRI into a meaningful narrative.

This produced a stream of news reports on foreign or anonymous groups targeting ads at Irish voters, fact checks of the misinformation being spread, and reflections on the nature of each campaign. These all contributed to a healthy skepticism among Irish voters online.

But the data in the TRI database deserves a closer analysis than it has yet received. It offers suggestions for how future elections or events might be distorted by social media — and how such distortions can best be combated.

Niamh Kirk, a journalism and digital media researcher at Dublin City University, carried out an analysis of the groups that had been buying ads before this ban and found that the role played by foreign groups was small but significant. Nine percent of ads were from groups based outside of Ireland.

There was also the question of funding. Irish electoral law states that all donations to political campaigns above 100 euros must be registered with the Standards in Public Office Commission (SIPO), meaning the groups paying for these ads should have been publicly declared.

But a number of the ads were being put out by groups that were either not registered or else completely anonymous — especially those coming from the retain side.

Another electoral fear was bots — automated social media accounts used to promote certain topics or users and shut down others. They’ve played a key role in disrupting democratic discourse on Twitter. The Computational Propaganda Project at Oxford University found that bots supportive of Donald Trump in the 2016 U.S. election outweighed Hillary Clinton’s 5-to-1.

The same techniques threatened Ireland’s abortion discussion. An analysis of more than 400,000 tweets collected two months before the referendum found a significant proportion of botlike activity.

Out of 267,274 tweets for #Repealthe8th, the figure for such botlike activity was half of the anti-abortion campaign.

However, one factor in the Irish abortion referendum that may have reduced the effect of bots on the national conversation was the employment of Repeal Shield.

Created by a group of pro-repeal volunteers, Repeal Shield allowed users to block a list of more than 16,000 accounts deemed by its creators to be “trolls, bots and fake accounts spewing lies and messages of hate.” Repeal Shield claimed that 70 percent of accounts blocked were from the Americas, based on an analysis of their time zones.

The use of this tool by more than 4,500 users is perhaps a central reason why, as seen below, a lot of tweets were being sent from the #Savethe8th community (red strands) to the #Repealthe8th community, but few responses were received in return (blue strands). 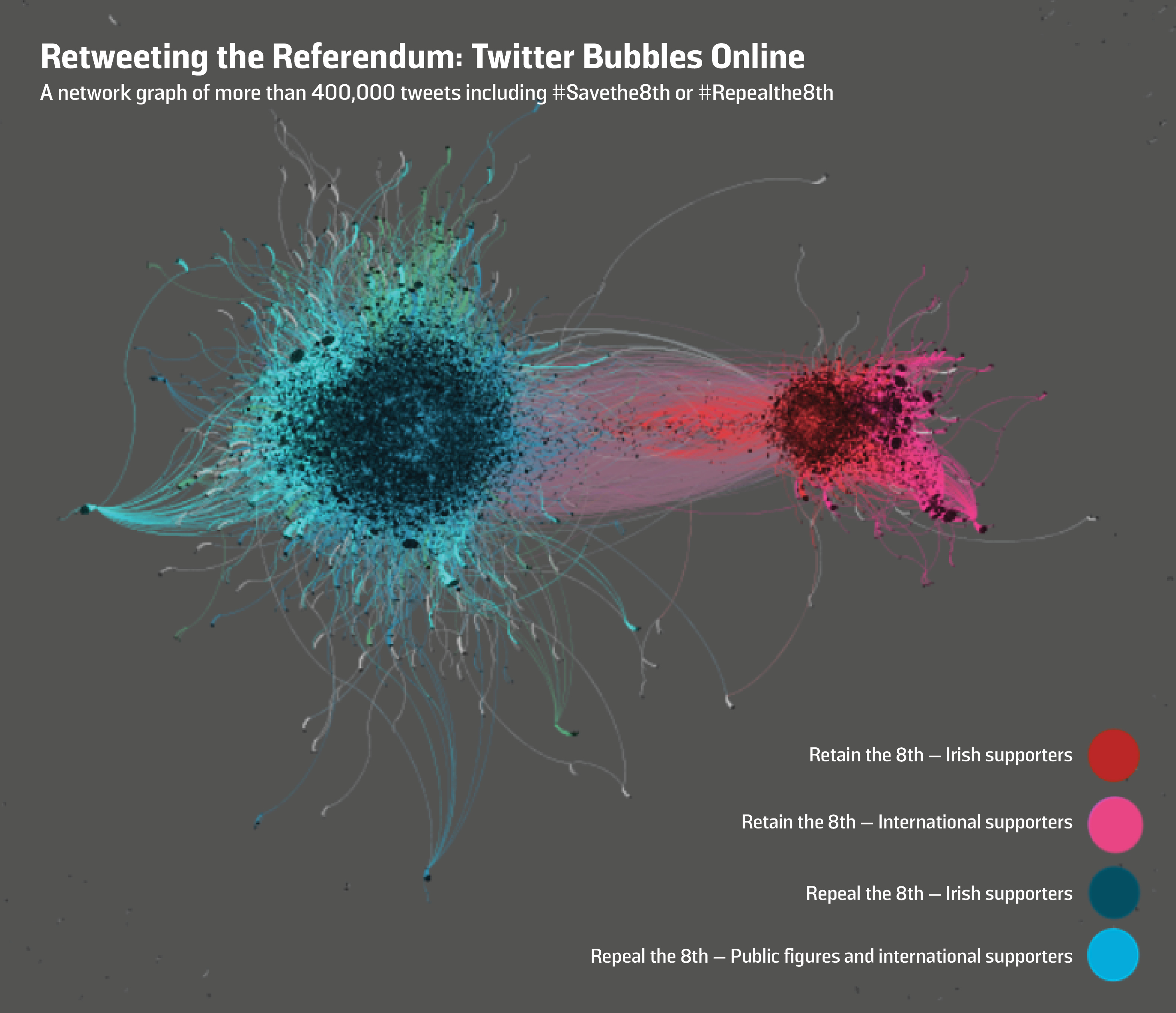 The employment of tools such as Repeal Shield raises its own worries, including the dangers of echo chambers and a lack of conversation or debate. But its widespread use shows how toxic the debate had become, largely due to trolling and abuse rather than good faith discussion.

The repeal campaign relied heavily on the personal testimonies of women’s suffering caused by the blanket abortion ban. Abusive, often misogynistic responses prompted a need for shielding from anti-abortion accounts more interested in driving them out of public space through abuse than in debate. 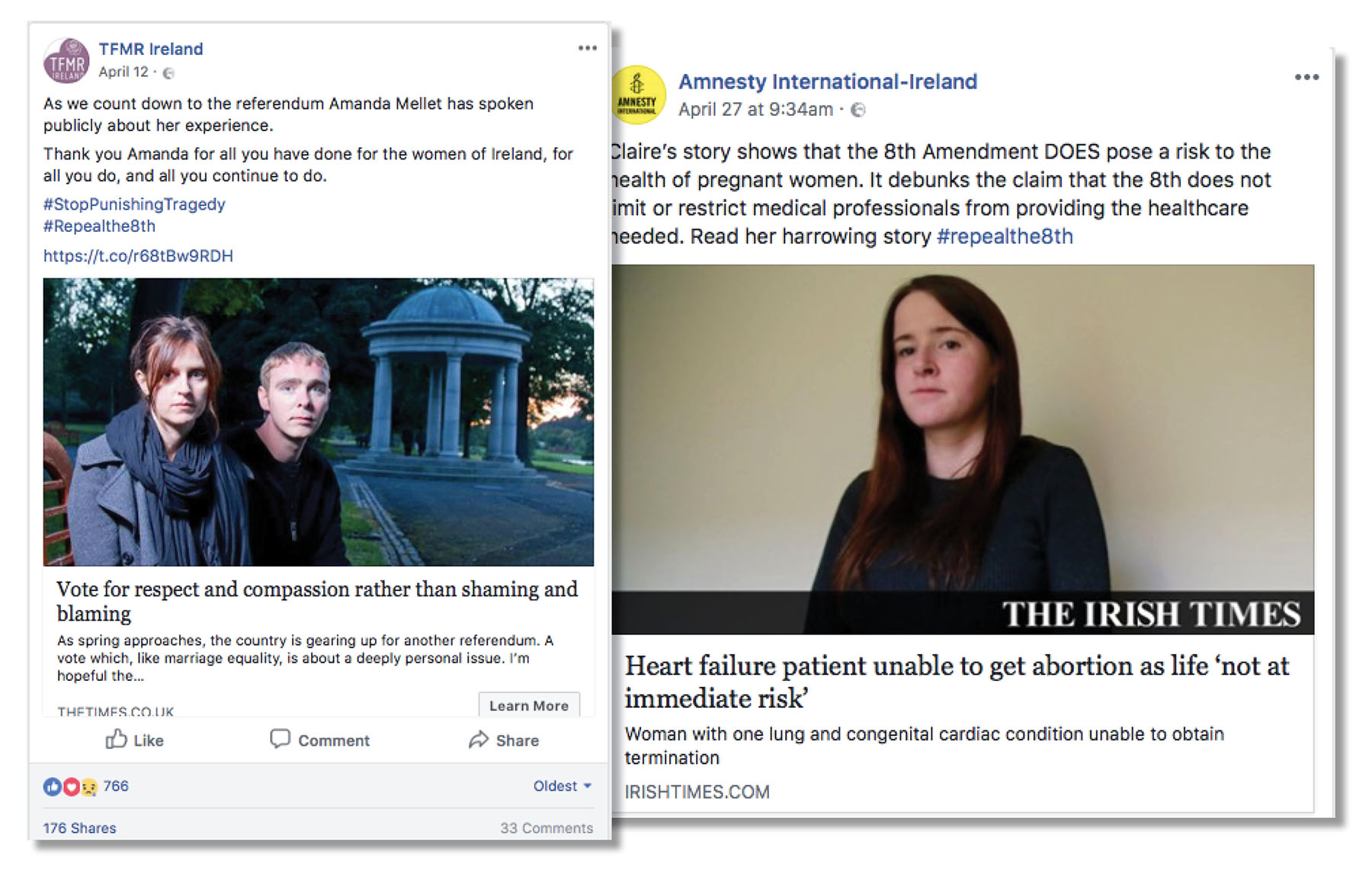 This meant that the power of personal testimony and storytelling — a particularly successful technique in Ireland, a small country with a long history of storytelling — could flourish and activists were able to use social media to organize and build morale unhindered.

Such storytelling, undeterred by personal abuse, had an impact. An exit poll conducted by the Irish national broadcaster RTE showed that 43 percent of those surveyed said people’s stories influenced their vote while 34 percent cited the experience of someone they knew. 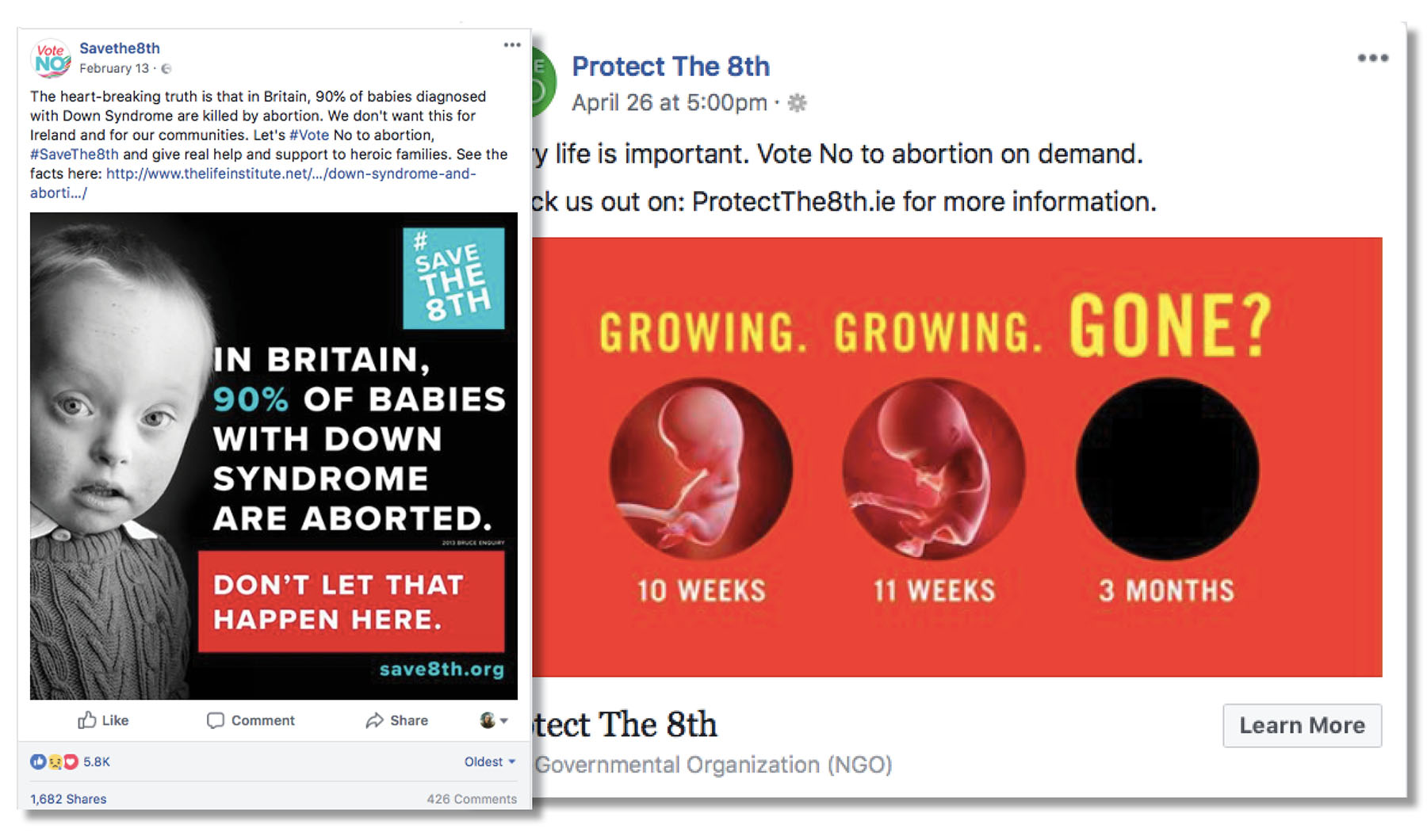 During the referendum campaign, the retain side used a combination of U.S.-style attack ads, scare tactics, and fake news articles while the repeal side played it relatively clean.

While such populist tactics may find success in larger countries where political divides are greater, Ireland is a fairly small nation. With a population of less than 5 million, centrist politics dominate, and core values tend to center on community and civility.

The repeal campaign played into this, consciously avoiding divisive rhetoric with a slogan of “Together for Yes.”

Of a sample of 571 of its Facebook ads, 18 percent were for fundraising events, and 25 percent were based on the promotion of local canvassing and campaign events such as town halls and coffee mornings. The campaign was trying to appeal to voters through face-to-face conversation.

The ads built upon the years of campaign for repeal, which centered on building a positive culture around the campaign, particularly among younger voters, engaging them through art and fashion (such as the repeal sweater).

The repeal campaign’s use of more direct political messaging did not increase until later on, perhaps in response to the retain campaign (which focused 82 percent of its ads on political messaging), but still largely maintained a calm and civil tone focusing on health, welfare, and compassion toward women.

The Employment of Facebook Ads in the Irish Abortion Campaign

How each side of the referendum executed ads (from a sample of over 1,000 ads collected over seven weeks)

The retain campaign, however, engaged in a more negative and combative form of campaigning — employing U.S.-style attack ads, misinformation, and a right-wing, populist style of messaging that at times veered into conspiracy.

Political messaging was a consistent focus of the campaign, in contrast with the fundraising and canvassing of the repeal side.

Some lines of messaging mimicked Trump-style discourse, implying that the mainstream media and politicians couldn’t be trusted.

One ad by the central anti-abortion campaign group Save the 8th went as far as posting an article accusing the Irish edition of the Times of “trying to smear people as part of its obsessive campaign to legalise abortion in Ireland.”

Another referred to the minister of health, who was advocating for a yes vote, as the “minister for fewer children.” The Save the 8th campaign also petitioned for the resignation of a leading doctor on the repeal side, Peter Boylan. 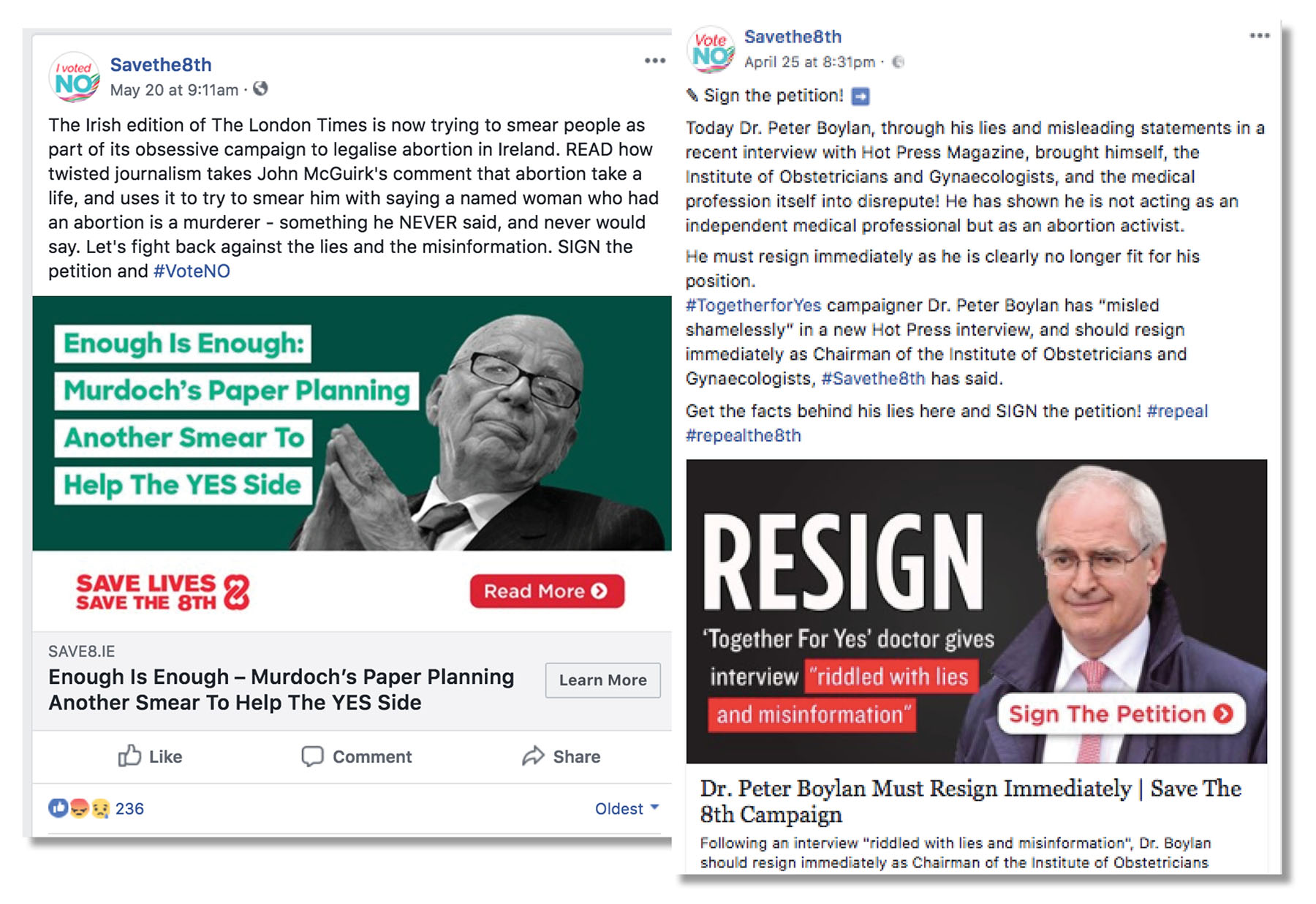 Other tactics included the targeting of undecided voters with websites that appeared fact-based but were in fact biased toward the anti-abortion side.

An investigation by the Irish journalist Gavin Sheridan found that one such website targeting undecided voters with so-called unbiased facts — Undecided8.org — showed signs of being linked to a U.S.-based marketing firm with a Catholic focus on mission expansion, which was also found to be working with a central anti-abortion campaign group.

Such activity was repeatedly exposed by an attentive media and citizenry, often undermining these efforts before they could take hold. For example, shortly after attention was brought to Undecided8.org by Sheridan on Twitter, the website and the associated Facebook page were deleted — six days after their creation. If anything, such suspicious activity online tended to backfire, only worsening the reputation of the retain side among voters and making the public more mistrustful of information online as a whole.

The magnitude of the yes victory (a 66.4 percent majority) indicates that any possibility of disruption may have been very small. The knife’s-edge nature of the U.K. and U.S. votes rendered them unusually sensitive to such intervention.

In practice, while these recognizable attempts to disrupt the democratic debate with microtargeted ads, bot activity, and misinformation were active, they appear to have been relatively ineffective and may even have turned voters away from those employing them.

Given the battleground online discourse has become in democracies across the world, this small country’s resistance to it may offer some cause for hope. The resilience offered by the small size and close-knit nature of the Irish electorate may be difficult to reproduce in larger democracies. But the active measures taken by media, volunteer groups, and campaigners against potentially corrosive techniques can be a powerful inspiration.

Rachel Lavin is a freelance data and digital storytelling journalist based in Dublin, Ireland.