Superbugs Are Going to Eat Us Alive

Drug-resistant diseases are on the rise. Only a global effort to prevent overuse of antibiotics can halt the threat.

When my 70-year-old grandmother needed hip replacement surgery in 2016, what was supposed to be a two-day hospital stay turned unexpectedly into a 12-month nightmare. The doctors had been confident that the surgery would be painless, the recovery would be quick, and she would be back on her feet within a couple of weeks.

Instead, my grandmother’s spirits slowly faded as she spent month after month in a hospital bed, waiting for various antibiotic cocktails to battle the infection that had developed in her hip after the initial surgery. Most of the antibiotics she was taking eventually stopped working, and the infection spread.

After nearly four months and three more surgeries, the doctors decided to put her on colistin, one of the strongest antibiotics known to mankind, classified as an antibiotic of “last resort.” They warned us that the drug was toxic. We quickly found this out for ourselves, as my grandmother’s kidneys started to fail because of the drug’s side effects. In the hallway outside my grandmother’s hospital room, the doctors warned us that this drug was the only chance we had left.

Many people have taken antibiotics such as penicillin for minor illnesses such as a sore throat or congested sinuses, but few of us realize how doing so might be making the world less safe.

Bacteria develop resistance to antibiotic drugs largely through a natural evolutionary process, demonstrating the Darwinian concept of “survival of the fittest.” As doctors deploy drugs to fight nasty bacteria, some of the bacteria inevitably figure out how to survive despite physicians’ best efforts to wage war against them. The ones that survive multiply rapidly and over time become more prevalent, spreading to and infecting others. As doctors respond by prescribing ever-stronger medications (or patients self-medicate), more and more bacteria continue to evolve, and antibiotic, or antimicrobial, resistance continues to spread.

News of the growing threat from “superbugs” has started to make waves in recent years. The United Nations last year dubbed antimicrobial resistance a “crisis that we cannot ignore,” the World Health Organization has developed a list of “critical priority” pathogens, and the O’Neill report commissioned by the British government warns that antimicrobial resistance could claim 10 million lives per year by 2050 if everyday infections and illnesses slowly become untreatable and the pharmaceutical industry doesn’t develop new antibiotics quickly enough.

Antimicrobial resistance has already started to threaten the everyday treatment of ordinary cuts and infections that most people take for granted. If bacteria grow more resistant to the antibiotic drugs doctors use to fight them, routine aspects of modern medicine, such as hip surgeries, will soon become impossible. Treating a child’s strep throat might become difficult and performing cardiac surgery or a cesarean section might become too dangerous within the next few years, returning the medical profession to the primitive era before antibiotics existed. 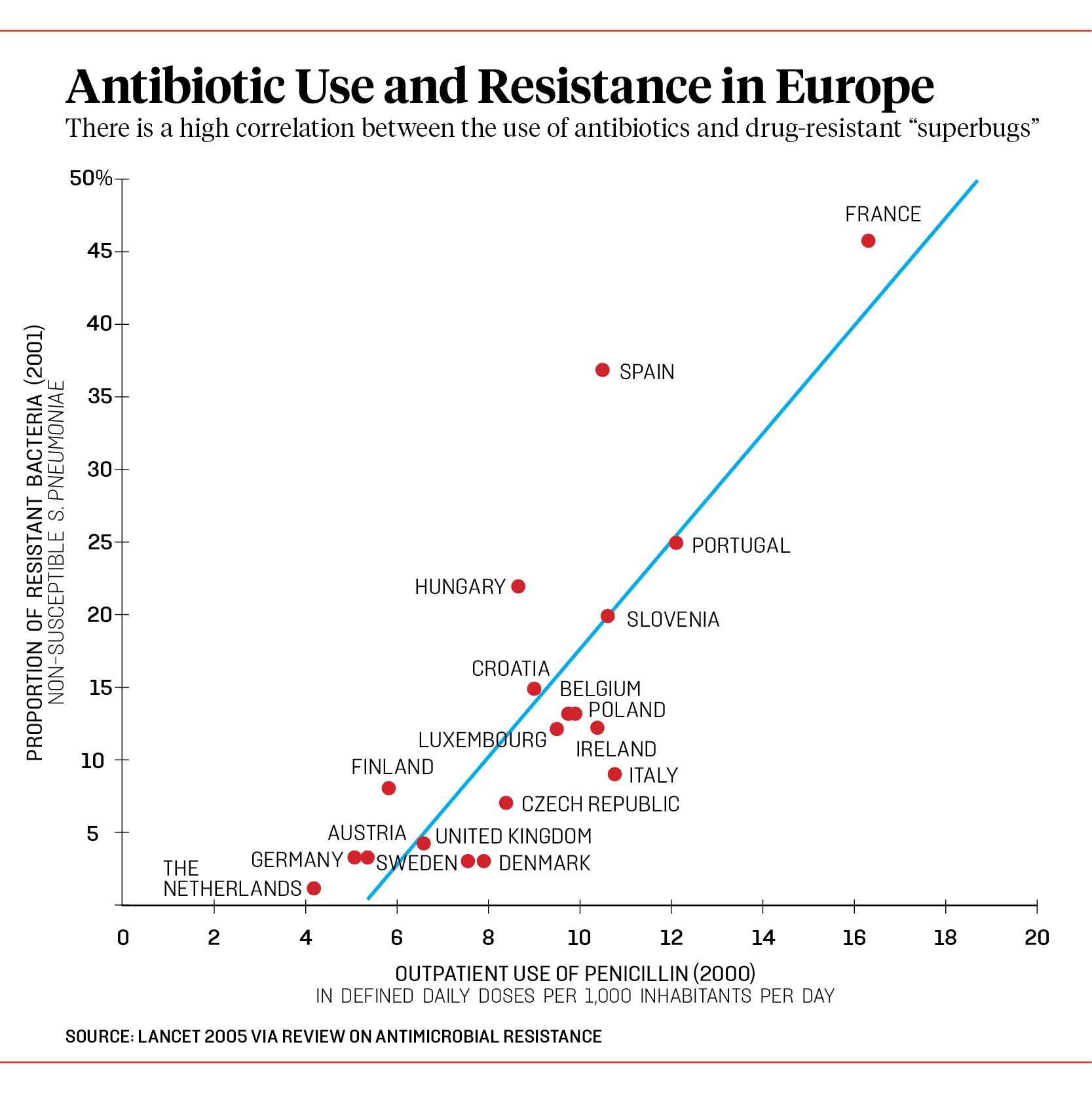 The reason antimicrobial resistance has recently arrived at a tipping point can be better understood in economic terms: Demand for antibiotics is outpacing their supply. On the demand side, the use of antibiotics has grown exponentially. Income growth and improved access to health care have enabled broader use of antibiotics not just in the Western world, but also in developing countries. Unfortunately, some modern use of antibiotics is unnecessary (for example, using them against viral infections) and excessive (such as prophylactic use in livestock). The CDC estimated in 2016 that one in three antibiotic prescriptions in the United States are unnecessary. The emergence of antibiotic resistance is itself contributing to an increase in demand, because doctors are forced to prescribe more intensive antibiotic regimens to patients who are infected by resistant bacteria; illnesses that could once be treated with a five-day course of a single drug now require multiweek regimens with two or three different antibiotics.

On the supply side, there are two key problems. First, as bacteria develop resistance to existing antibiotics, the number of effective drugs in a typical hospital’s arsenal is shrinking. Ordinary antibiotics like penicillin are no longer effective against illnesses they used to easily treat, such as pneumonia, tuberculosis, and dysentery. Second, the rate of development of new antibiotics has slowed dramatically. Pharmaceutical companies have devoted most of their resources toward fighting cancer and other chronic diseases that primarily afflict patients in the rich world whose insurance companies can afford to pay, which are therefore much more lucrative. The last new class of commercial antibiotics was developed in the 1980s.

Fortunately, smart policymakers and the medical community are starting to take action. For example, to reduce the wasteful use of antibiotics, the European Union banned the use of antibiotics as growth promoters in animal feed in 2006. The U.S. Food and Drug Administration caught on in 2017. Many countries have put in place more stringent stewardship regimes to reduce the prescription of antibiotics for viral infections against which they are useless, but up to 50 percent of antibiotics worldwide might still be available without prescriptions. On the supply side, the British and Chinese governments have set up a research fund to help incentivize pharmaceutical companies to develop new antibiotics.

The Access to Medicine Foundation set up a new index to evaluate which pharmaceutical companies are doing their share to help not only develop new drugs, but also prevent the misuse of existing drugs. Companies could tighten their distribution and sales networks so that antibiotics are sold only for appropriate use and not to livestock farmers or people without prescriptions. They could also educate and train the medical professionals they work with, limit unnecessary marketing and promotions of antibiotics, and develop internal and coordinated systems to track antibiotics sales and use.

Like global climate change, the scourge of antibiotic resistance is a problem that will require some form of coordinated global action. It isn’t enough for the United States or the EU alone to get tough on antibiotic use. In a world where anyone can fly from Shanghai or Bombay to New York in 15 hours, bringing resistant bacteria along with them, countries such as China and India must also join this fight.

Fortunately, because the antimicrobial resistance challenge has some similarities to the “tragedy of the commons” that plagues our climate, policymakers might be able to leverage some of the hard-learned lessons from that fight to better tackle this one.

Mirroring the Paris climate agreement, a global framework that enables countries to make individually determined contributions to help fight antimicrobial resistance may be the best way to assemble a broad coalition of actors and galvanize interest in the shared challenge ahead of us. However, to help correct the Paris agreement’s inability to hold countries accountable for meeting their own commitments, there should also be financial rewards in the form of a global reward fund for countries that meet or exceed their individually determined commitments. This approach, which relies more on carrots than on sticks, might be more effective than prior efforts to catalyze a coordinated global fight against antimicrobial resistance.

Within a few days of starting my grandmother on colistin, the doctors informed us that they were cautiously optimistic. The spread of the infection seemed to have slowed down. With a few more weeks of antibiotic treatment, she was cured and released. The doctors didn’t want to say it, but we all knew it: We were lucky this time. Resistance to the antibiotic of last resort is spreading rapidly, however. If the global community fails to act soon, and this last silver bullet ceases to work, modern medicine as we know it will be changed forever.

Riju Agrawal is an engineer and policy analyst currently pursuing a joint degree at Harvard Business School and the Kennedy School of Government. He was selected as a future energy leader by the World Energy Council and is a World Economic Forum global shaper.  Twitter: @riju_agrawal
Tags: China, Health, India, United Nations, United States
Latest