President Recep Tayyip Erdogan has won 12 electoral contests in the last 16 years. But this time he faces what may be his greatest political challenge: himself. After having consolidated power by crushing the organizers of a military coup, firing thousands of government workers, and controlling much of the media, Erdogan knows he holds sole responsibility for the state of his country today. And the economy is struggling: The Turkish lira is down more than 20 percent against the U.S. dollar this year and inflation is running at 18 percent. Meanwhile, Erdogan’s main rival, opposition candidate Muharrem Ince, has been drawing large crowds of support and is expected to take the election into a second runoff vote with Erdogan. 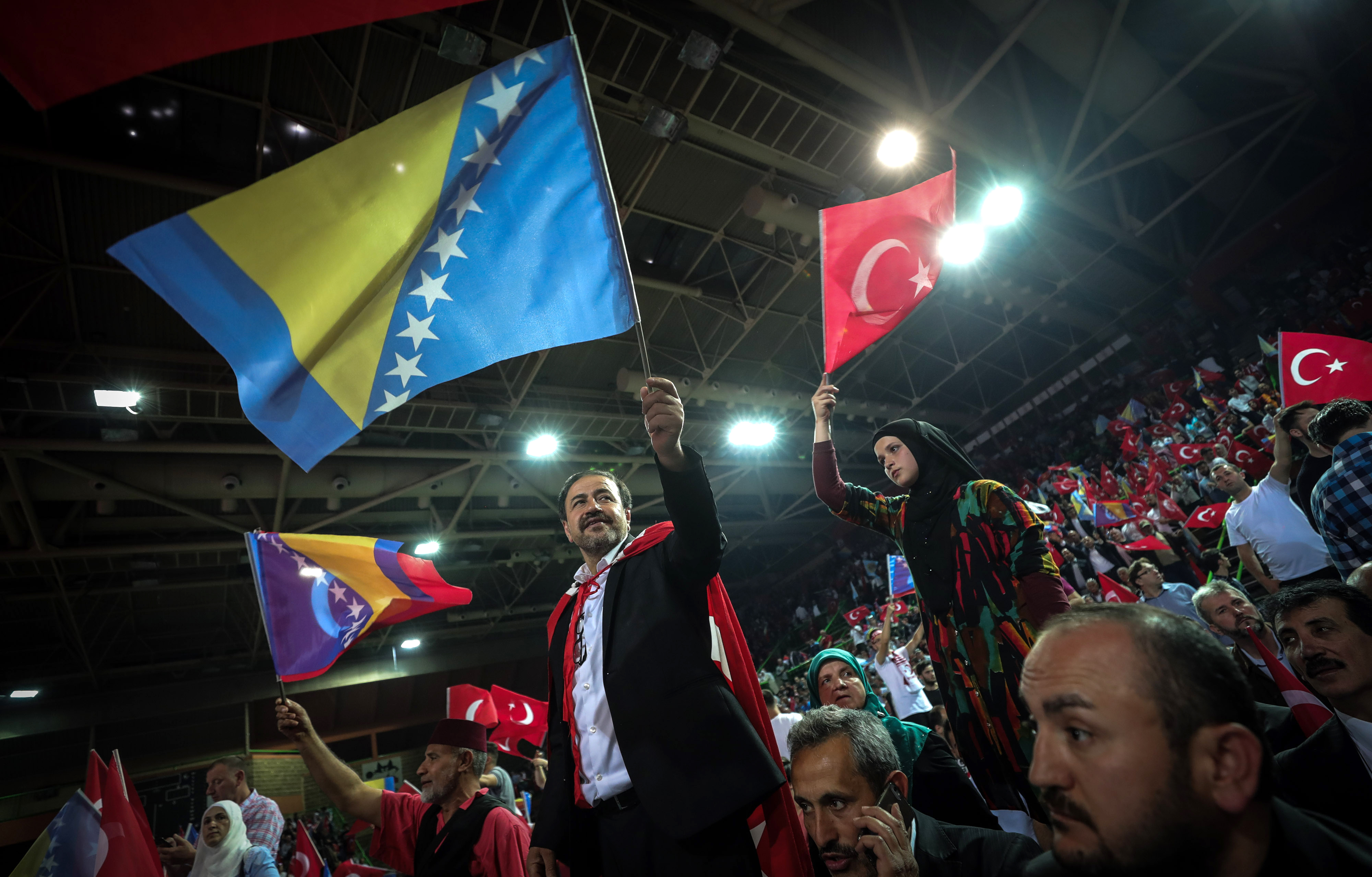 Supporters of Turkish President Recep Tayyip Erdogan wave the Turkish national flag during a pre-election rally in Sarajevo, on May 20. (Oliver Bunic/AFP/Getty Images)

Erdogan Is Making the Ottoman Empire Great Again: Turkey is leveraging tradition to expand its power in Europe — but the history cuts both ways. by Michael Colborne and Maxim Edwards 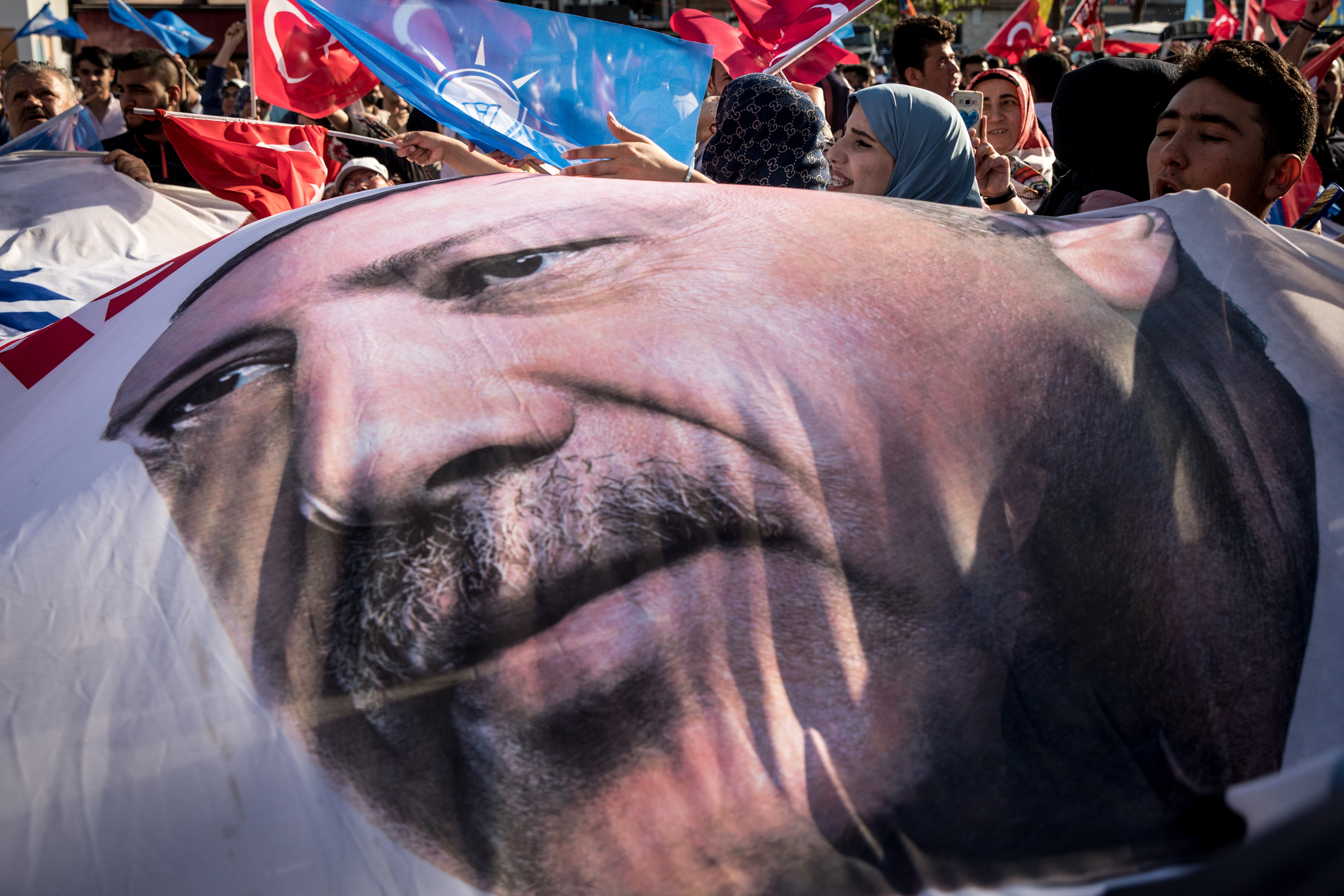 Don’t Trust Anybody About Turkey’s Elections: The one thing that’s clear about Erdogan’s re-election bid is that everything is unclear. by Steven A. Cook 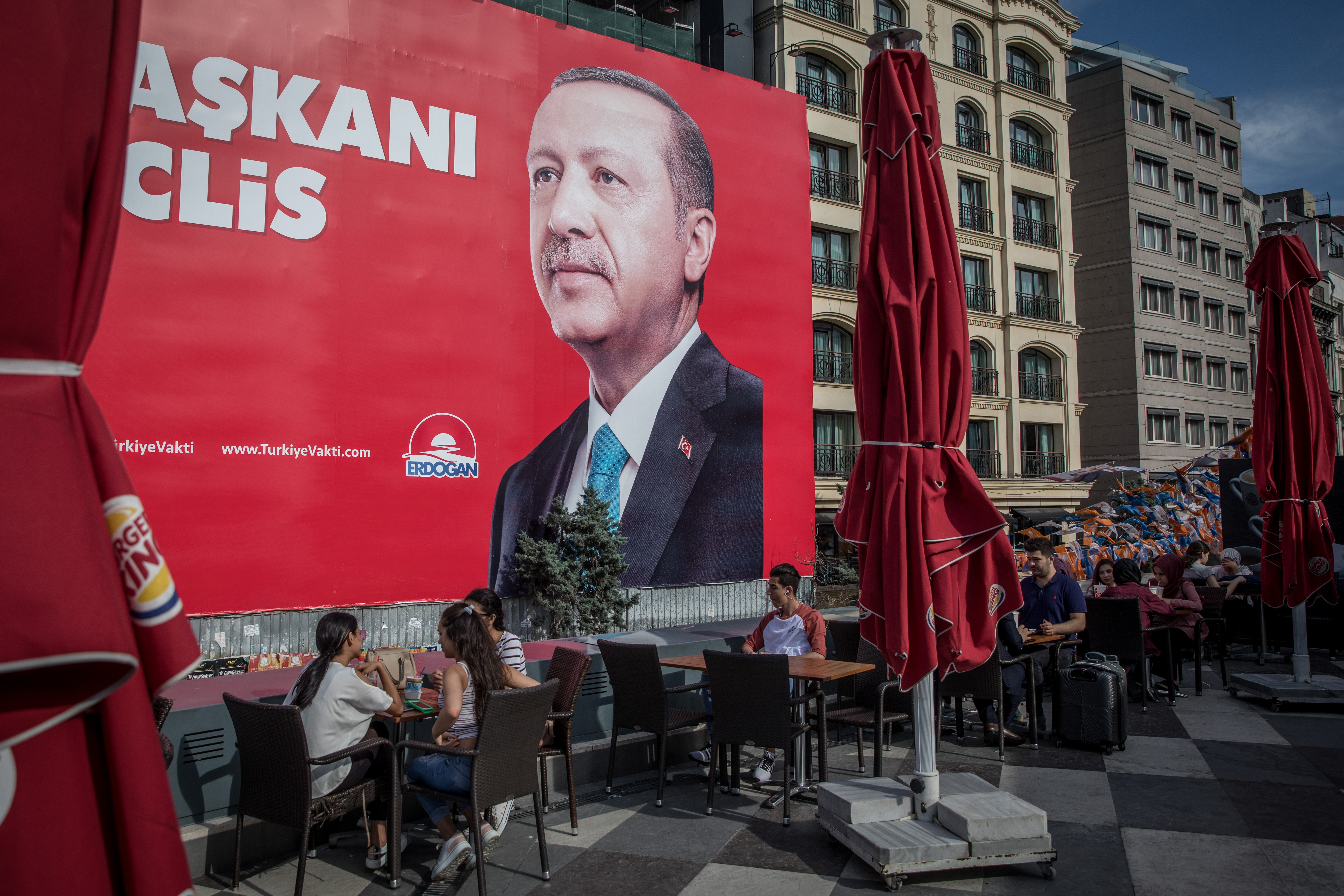 Erdogan Will Win by Any Means Necessary: Turkey’s president has plenty of experience stealing elections — and Sunday’s vote is one he can’t afford to lose. by Henri J. Barkey 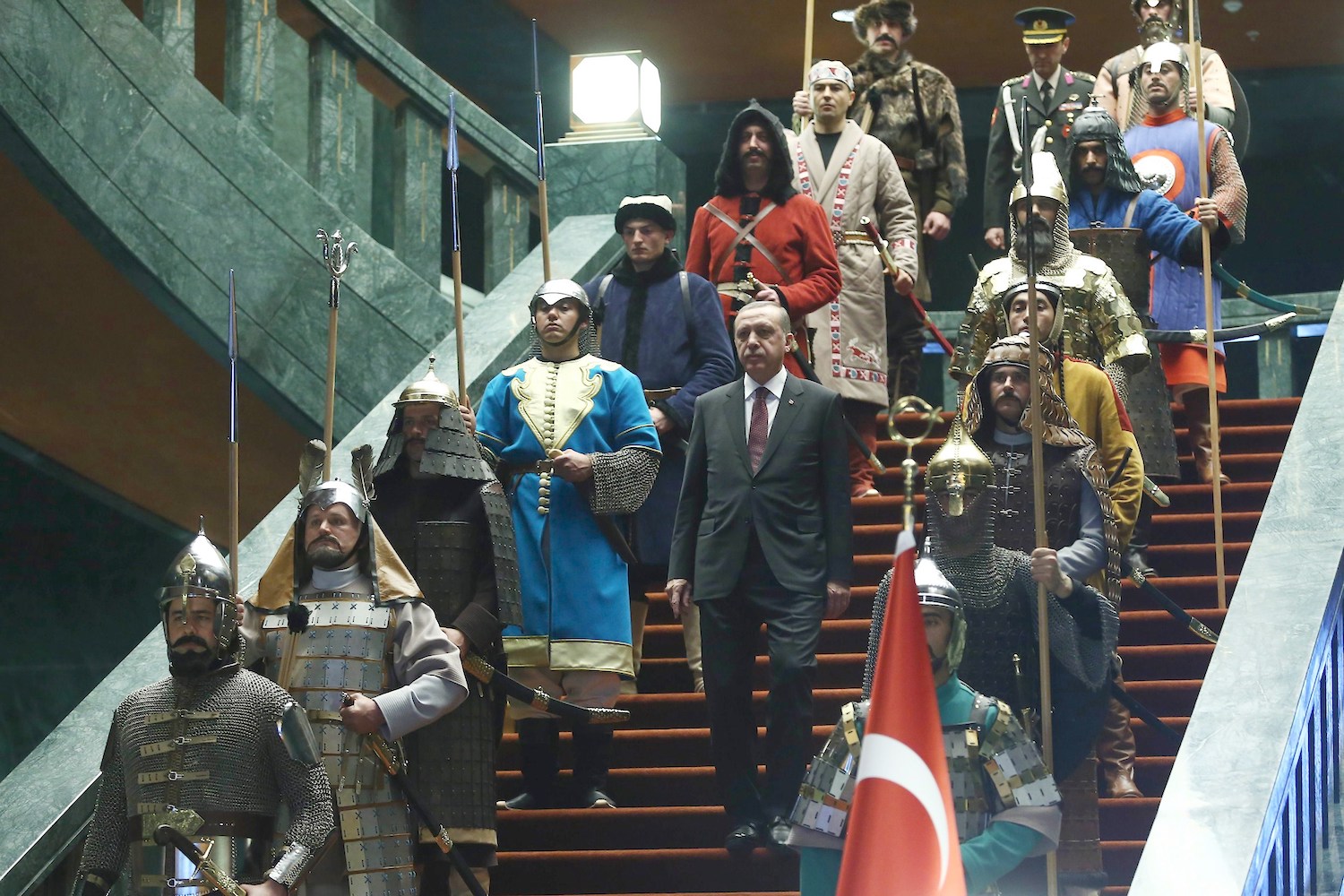 Turkey's President Recep Tayyip Erdogan walks down the stairs in between soldiers, wearing traditional army uniforms from the Ottoman Empire, as he arrives for a welcoming ceremony for Palestinian President Mahmoud Abbas at the presidential palace in Ankara, January 12, 2015.

Don’t Turn The Turkish Army Into A Political Tool: Turkey has a history of coups. Whoever wins the election must prevent politicization of the military. by Ozgur Ozkan 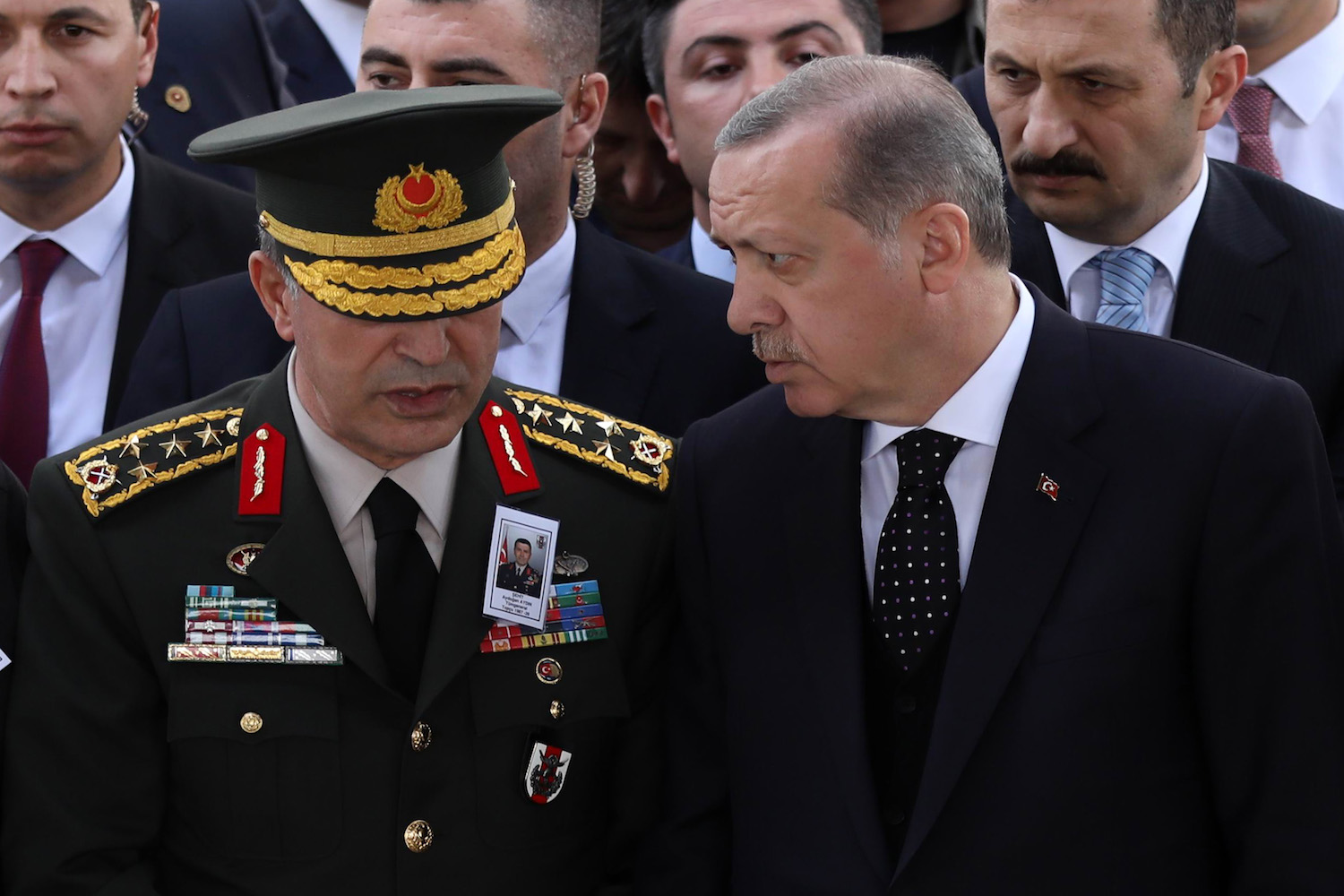 Turkey’s Wag-the-Dog Election: Erdogan is fighting a military battle to win a political one. by Turker Erturk and Selim Sazak 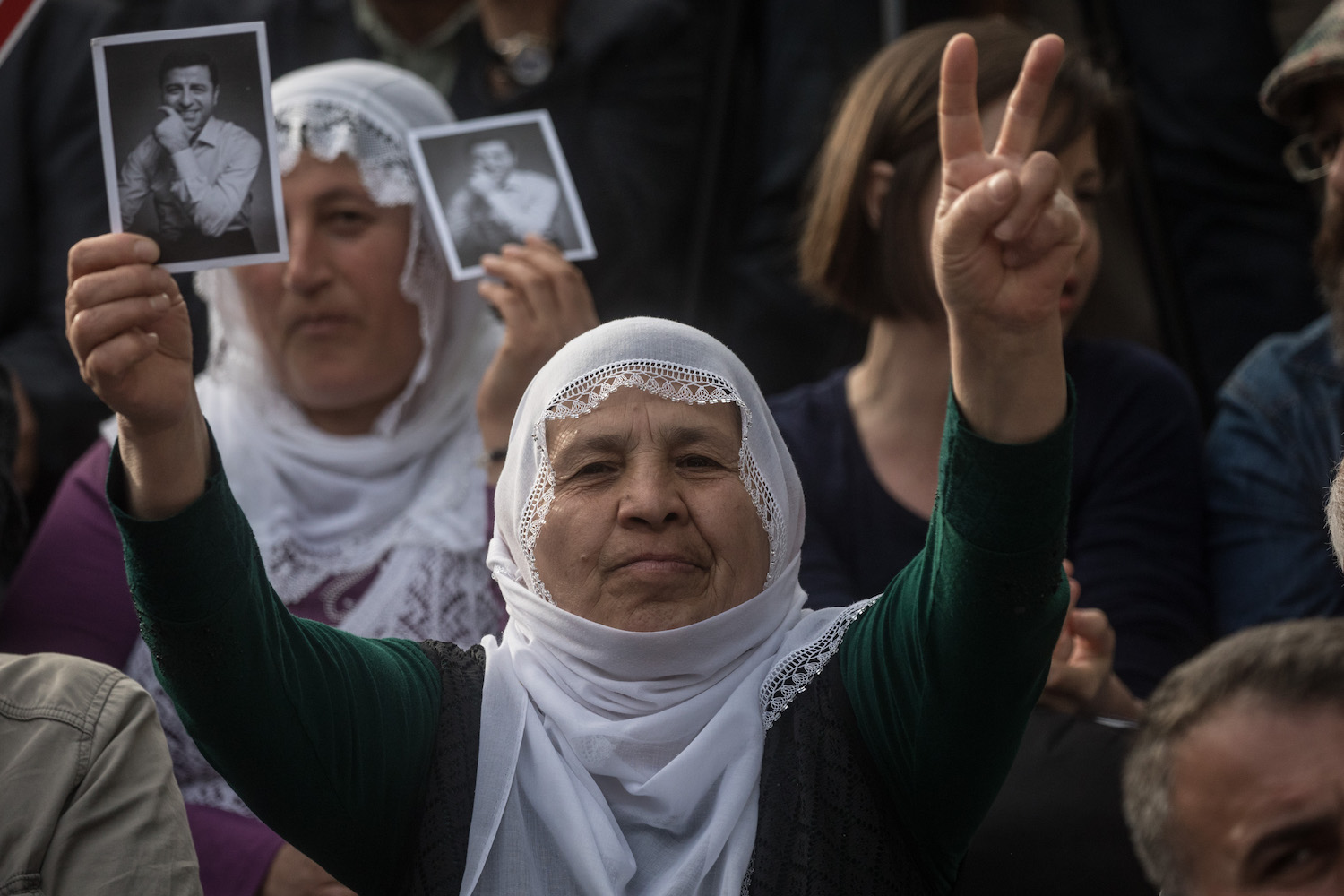 Supporters of the Pro-Kurdish Peoples' Democratic Party (HDP) shout slogans and hold pictures of HDP's imprisoned presidential candidate Selahattin Demirtas at an election rally on May 4, 2018 in Istanbul.

The Making of a Kurdish Mandela: By keeping a key challenger in jail, Turkey’s government risks making Selahattin Demirtas an even more popular and formidable opponent. by Henri J. Barkey