Children Are Paying the Price for Afghanistan’s Endless War

As schools become targets, young Afghans are living and working on the streets — and the government isn’t doing much to protect them.

KABUL — Despite the latest short-lived ceasefire between the Taliban and the Afghan government, civilians continue to experience the wrath of Taliban and Islamic State attacks. A suicide bombing killed at least 13 people in Kabul on June 11, and there has been a wave of attacks on public institutions in Jalalabad. The militant groups deliberately target public places during festivals and holidays. While the two sides laid down their weapons for three days during Eid celebrations, Taliban spokesmen vowed to continue fighting unless they could negotiate directly with the U.S. government and until all foreign troops left the country.

The unceasing conflict in Afghanistan has destroyed the institutions meant to protect children. “Nearly half of the children aged between 7 and 17 years old — 3.7 million — in Afghanistan are missing out on school,” according to the Afghan Central Statistics Organization’s figures in a UNICEF report published this month. Approximately 2.1 million Afghan children between ages 6 and 14 are involved in some form of child labor, according to the statistics bureau (the U.N. Population Division estimates 2.5 million). Many of them work in jobs hazardous to their safety and health: carrying heavy loads on streets, welding, operating heavy machinery, collecting harmful waste products, and working in factories for long hours.

Generations of children have paid the price in a country that has not been at peace since the 1970s. An April New York Times report cited widespread violence as a leading reason for children not attending school. Afghanistan remains suspended in the liminal space between conflict and recovery, and despite billions of dollars being pumped into globally funded reconstruction efforts, protection for children — whether those attending school, working on streets or in factories, and others confined to their homes because of insecurity — remains precarious and their future prospects threadbare. The latest U.S. government assessment admits that the goals of growth and stabilization that its aid agencies have promulgated amid incessant conflict may be “unrealistic.”

Last December, I shadowed three girls who sold plastic bags for grocers at a market in western Kabul, where they lived with their families. Due to extreme poverty, they and their siblings had to work to make ends meet. All three said that they were most worried about attacks and abductions by armed groups. “There was a girl by the name of Kayenat that used to work with us. One day she disappeared during a [security] incident, but the police never found out,” 11-year-old Sadaf, the youngest of the three hawkers told me, dejectedly shrugging off the sudden disappearance of her friend. Many of the working children also feel a strong sense of responsibility to contribute to their families’ survival, and therefore suppress their anxiety when working on the streets, Sadaf explained.

It was 1:00 p.m. and these children should have been in the safe confines of classrooms since the school year commences in the spring following Nowruz, the Persian New Year. But this year began with an ominous start, when Nowruz celebrations were jolted by the bombing of a Shiite mosque in in Kabul. The recent attacks in Herat, one of which killed and injured children, show how dangerous life has become for young Afghan civilians.

The March Afghan army airstrikes on a madrasa in Kunduz resulted in the deaths of students participating in a graduation ceremony. A few weeks later, masked insurgents set fire to schools in Logar and Nangarhar provinces in what appeared to be part of a deliberate effort to terrorize the students and their families. The Taliban has gained notoriety for attacking schools, sometimes destroying hundreds of facilities within a couple of months, as part of a concerted intimidation strategy. Now the Islamic State is adding to the toxic mix, by shutting down girls’ schools in their stronghold, in Nangarhar Province. Despite the Afghan government’s “safe schools” promise made in 2015, classrooms remain active battlegrounds, with all sides, including state armed forces, using them as military bases. Children’s futures have become hostage to ideological wars.

The multiple low-grade conflicts between the Afghan army and up to 20 terrorist groups have increased in intensity and frequency over the first six months of 2018, in the country’s urban areas that are also home to large, unprotected, internally displaced populations. Among them are many working children who are acutely vulnerable to attacks. With 94 percent of the 1,048 casualties in Kabul resulting from suicide bombings and complex attacks in the first six months 2017, the U.N. ranked the Afghan capital as the most dangerous city in the country, in its midyear report on the protection of civilians in Afghanistan.

A recent report by the International Crisis Group predicts more violence, as cities become targets for terrorist groups. While U.S. officials were optimistic about a peace deal in March, following a period of reduced civilian casualties in 2017, the worsening security situation for civilians demonstrates that the 16-year war is not coming to an end. Even Gen. John Nicholson, the outgoing commander of U.S. and NATO forces in Afghanistan, has warned of new attacks by the Taliban as part of their spring offensive ritual. Afghan army officials are only adding to the indiscriminate violence by taking liberties in targeting civilian areas.

The few institutions advocating for child protection have suffered devastating blows. A few weeks prior to the January attack on the Save the Children’s office in Jalalabad, I met children in the city center, many of them who fled attacks in nearby villages, who were collecting scrap metal on a nearby street. Following the deaths of three of its staff, the charity shuttered its programs in the country — yet another symbolic and practical blow to child protection. 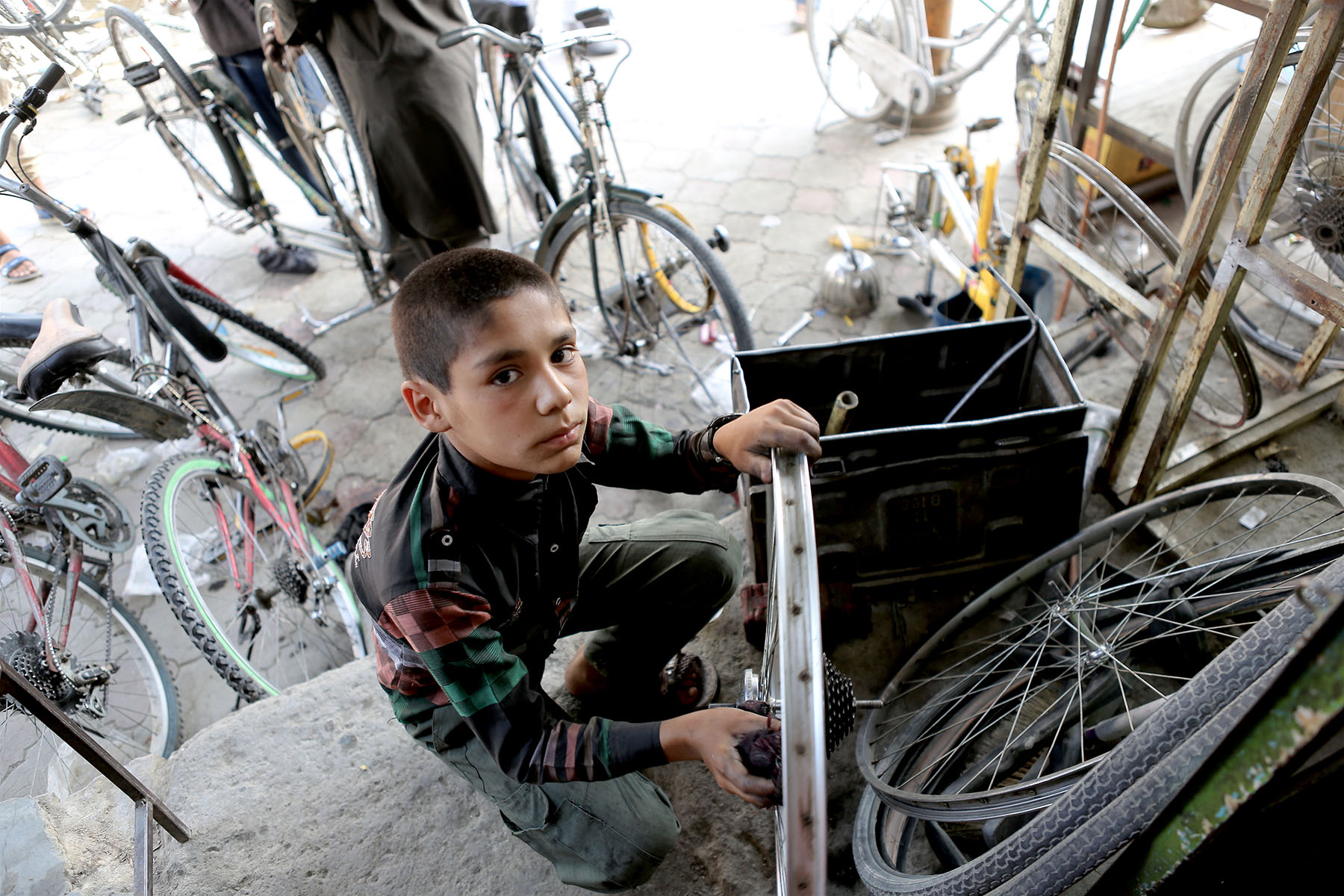 Mohammad at the family’s bicycle repair shop in Kabul. He works all day and attends classes in the evenings. (Preethi Nallu/Samuel Hall)

Not far from the bazaar in Kabul, I met another working child, 13-year-old Mohammad, at a bicycle repair shop. He works for his older brother, who also worked in a similar capacity for their father at Mohammad’s age. In Afghanistan, boys often bear the onerous responsibility of providing for their families from a young age. Mohammad is also among the hundreds of thousands of children who work while attending school. While fatigue lined the boy’s face as he worked under the blazing afternoon sun, he also felt fortunate to be able to study. “I start my homework after my evening classes,” he said while he fixed the spokes of a wheel with the finesse of an expert.

Like Mohammad’s brother, many working-class Afghans I met did not believe education would lead to better opportunities and was a “safety hazard.” A ubiquitous reluctance among parents to send children to school is pushing many minors toward full-time labor and, paradoxically, more exposure to attacks in public spaces. The number of working children is growing exponentially.

A report published by the Norwegian Refugee Council in January found that among the returning refugees who are unable to resettle in their place of origin, 72 percent are displaced at least twice due to instability; many of the children among them do not have access to school. Given these conditions, aid workers explain that a “zero-tolerance” policy toward child labor will not yield much success. In a country where more than 90 percent of jobs are in what the Ministry of Labour deems “vulnerable employment” — meaning unstable and insufficient in income — any efforts to secure the futures of children must accommodate these realities. Child labor, at least in its milder forms, will continue in Afghanistan for the foreseeable future, but mitigating its impact on the children’s educational trajectories and altogether abolishing hazardous forms of labor is possible.

The blueprints that can facilitate long-term protection of children exist in government plans. While acknowledging that working children on the street are likely the result of the “deterioration of Afghanistan’s socio-economic situation due to the ongoing conflict and displacement of families,” the government launched a national strategy to tackle hazardous forms of child labor. But the plan cannot succeed if it does not provide Afghan families with basic services and access to secure livelihoods. This has happened in some provinces and districts but success depends on the relationships between residents and their local leaders.

Amid the stalemate between the Afghan government and the Taliban, local civilian representatives who have met with Taliban leaders claim that there is a changing mindset. Instead of waging a blanket war against a purportedly intransigent foe, they have asked that the government form alliances with partners among the local leadership and secure better protection for civilians, especially children. Most adults participating in the pro-peace sit-ins that have taken place across the country since March want to secure their children’s safety.

These parents claim that economic and social stability are impossible without resuscitating the flatlining peace process. Without a negotiated peace, many young Afghans will face a future like 15-year-old Fatima, whom I met in the eastern part of Kabul.

Fatima has a predictable daily routine. She works as a seamstress at home, because her parents fear for her safety on the streets. With little choice but to acquiesce to her “fate,” as she calls it, the teenager’s sentiments oscillate between a sense of relief that she is protected and a lingering sadness over not being able to play out in the open with her friends. With her neighborhood in Kabul becoming more prone to attacks, her parents might stop sending her to school altogether. “They plan to marry me off to a man who lives away from the city and its threats,” she told me with a sad smile.