In Bosnia, Forgetting Could Mean a Brighter Future

The debate over whether to build an official memorial to Sarajevo's Romeo and Juliet, murdered in 1993, exposes the pain and peril of dwelling on the past.

SARAJEVO, Bosnia and Herzegovina — Meriam has told the story of Bosnia’s wartime Romeo and Juliet more times than she can count.

“This isn’t something I forget,” Meriam, 33, told a group of about a dozen tourists at the foot of the bridge where Bosko Brkic and Admira Ismic were shot dead in May 1993.

Brkic and Ismic, both 25, were high school sweethearts trying to eke out an existence in Bosnia’s war-torn capital. Ismic, a Bosniak Muslim, and Brkic, a Christian Orthodox Serb, had decided the time had come to try to escape the hell that was the siege of Sarajevo.

Holding a photo of the young lovers, Meriam’s voice cracked as she described how snipers gunned them down as they tried to flee across a bridge to territory held by Bosnian Serb forces. Brkic died instantly. Ismic, fatally wounded, crawled over to Brkic’s body, cuddled him, and, holding him, died a few minutes later. Their bodies, still locked in an embrace, were left lying on the pavement in unseasonable heat for more than a week.

“As long as we remember them,” Meriam said, “none of this was in vain.” It’s clear that many people in Sarajevo, Bosnia, and the whole of the former Yugoslavia, regardless of national background, are attached to the story of Brkic and Ismic; they certainly haven’t forgotten it either. For them, it represents something that has been lost, a prewar innocence — a time of tolerance when merchants of nationalism didn’t rule the roost.

But remembering in today’s Bosnia is not so easy. For a story that so many recall and tell foreign visitors, the same visitors won’t see a single monument or memorial in Brkic and Ismic’s honor anywhere near the bridge where they were killed. And for some Sarajevans, that’s the way it should be. Building monuments and memorials, ironically enough, may not always be the best way to remember the past. 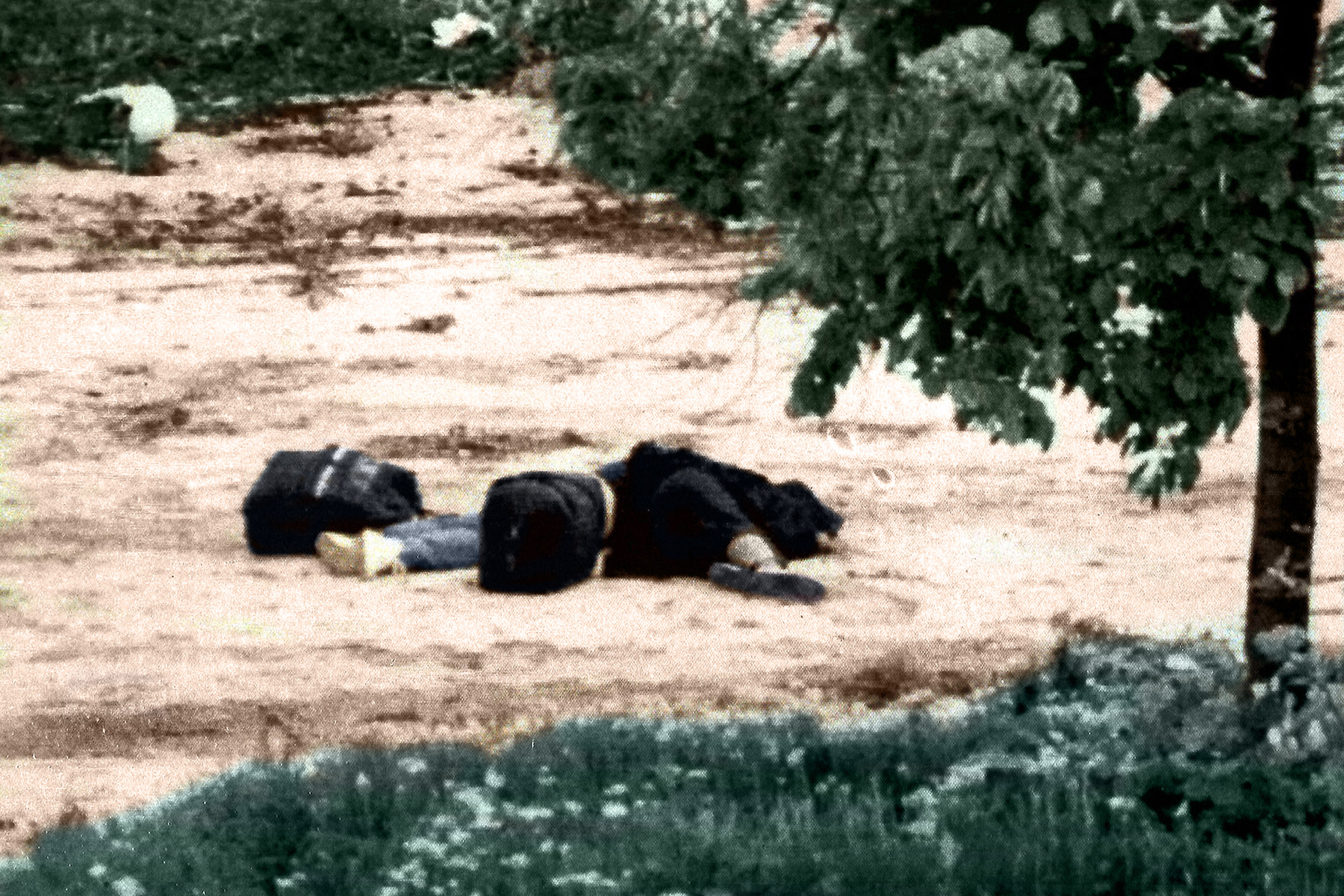 Above: The bodies of Admira Ismic, right, and Bosko Brkic lie near the Vrbanja bridge in Sarajevo, Bosnia, on May 19, 1993. Admira, a Muslim, and Bosko, a Serb, were gunned down as they tried to escape the war-torn city.(Northfoto via Getty Images) Top: Admira and Bosko are shown in a photo taken along Sarajevo’s Miljacka River just after their high school graduation in 1985. (Chris Helgren/Reuters)

Brkic and Ismic’s story first made it around the world thanks to Kurt Schork, the Reuters correspondent in the besieged Bosnian capital, who told the story of Brkic and Ismic a few days after their deaths.

“Bosko is face-down on the pavement, right arm bent awkwardly behind him. Admira lies next to her lover, left arm across his back,” Schork wrote for Reuters on May 23, 1993. A year later, the story of Brkic and Ismic was made into a documentary film, Romeo and Juliet in Sarajevo, by PBS’s Frontline, the Canadian Broadcasting Corporation, the National Film Board of Canada, and WDR Germany.

As a Serb in a largely Bosniak city, Brkic began getting more and more abuse from angry neighbors as Bosnian Serb forces continued to pound the city; the shells even destroyed the apartment Brkic shared with his mother. After receiving a request to report to a Bosniak-run police station, Brkic feared the worst. His grandfather had vanished during World War II when he had obeyed a similar order. Brkic didn’t want to meet the same fate. With Ismic by his side, they decided they would flee Sarajevo to the Bosnian Serb side.

Ismic left a note for her mother that morning. “My dear Mum: It seems we are finally leaving tonight and whatever happens is God’s will,” the note read. “Everything will be fine, like the war never happened.” Later that same day, Ismic and Brkic were shot dead. It’s still not known conclusively who fired the fatal shots.

After the war, Brkic and Ismic were buried in Sarajevo’s Lion’s Cemetery, surrounded by other victims of the siege and within sight of the cafe where they first met. Schork himself died in 2000, shot along with a colleague in Sierra Leone covering the country’s brutal civil war. Half of his ashes, as he had stipulated in his will, were buried next to Brkic and Ismic.

Media across the whole of the former Yugoslavia faithfully retell the couple’s story every year. Reader comments tend toward the nostalgic. They are an “example of true love,” said one reader of Dnevni Avaz, Bosnia’s biggest-selling newspaper. Some readers of one popular Serbian tabloid, Blic, said the story always brings tears to their eyes. They were “pure and innocent” people destroyed by war, said one reader on a Croatian website, while back in Sarajevo some said they’re even a “symbol of Bosnia and Herzegovina, of co-existence.”

But at the bridge where Brkic and Ismic spent their last moments together, there’s nothing to help anyone remember them. There haven’t been many serious efforts to erect a memorial or monument or in some way publicly honor their memory. The University of Sarajevo political scientist Nezruk Curak told journalists last year that he was trying to persuade politicians to introduce “a day of remembrance for the courageous people like Admira and Bosko.”

While some Sarajevans seem amenable to the idea of a public memorial, others have responded to the suggestion with scorn. Many of those who were in the besieged city during the war worry that yet another memorial to the city’s recent bloody past is more than the still-wounded city and country would be able to bear.

Two years ago, a local politician, Neira Avdibegovic-Dizdarevic, at the time a member of the left-leaning Democratic Front, proposed a memorial be built, and the online reaction to the young politician’s statement on the Bosnian news portal Klix was almost uniformly negative: an “overblown Hollywood story,” one reader said.

Others of a more Bosniak nationalist bent derided Brkic as a traitor. “He tries to run away from his own,” one commenter said in a profanity-laced post on Klix, “but then they kill him and then they want to build him a statue.” Other readers wondered why the story of Brkic and Ismic should be remembered more than those of the thousands of others in Sarajevo who lost their lives during the siege in their own dire, sad circumstances.

Aida Cerkez, a journalist from Sarajevo who worked for The Associated Press during the war, saw Brkic’s and Ismic’s bodies on the bridge. She knows firsthand how painful a well-intentioned memorial to the past can be. For the 20th anniversary of the start of the siege of Sarajevo in 2012, a group of artists set up the Sarajevo Red Line along the city’s long central street — a column of 11,541 red chairs representing all of the lives lost in the city during the siege, including 643 smaller red chairs representing children.

It was the first time Cerkez and others were truly able to grasp the barbarity of what had happened in their city 20 years before. “Nothing during the war was as powerful as that for us,” Cerkez said. “It was so painful that I’m not really sure I want to relive that,” she said, stressing just how heart-rending the episode was for her and others.

Predrag Kojovic, the leader of Our Party, a small party fighting an uphill battle against Bosnia’s ethnic-based political system, doesn’t think there should be a monument or memorial to Brkic and Ismic. The bridge they died on, Kojovic notes, is already named after Suada Dilberovic and Olga Sucic, the first two victims of the siege. There are so many stories like Brkic and Ismic’s, he says, that commemorating them all isn’t even possible or desirable.

A war correspondent for 20 years before entering politics, Kojovic worries that what made Sarajevo so special before the war risks being lost to the memories of the war and to a tourism industry that markets the sufferings of the fratricidal conflict to curious visitors. Even if stories like Brkic and Ismic’s are positive symbols — Kojovic notes that he himself is the product of a mixed couple — he worries that the way the negative memories from the war are remembered isn’t conducive to building a new, forward-looking Sarajevo. “It would be branding Sarajevo as a huge graveyard where people live,” Kojovic said. 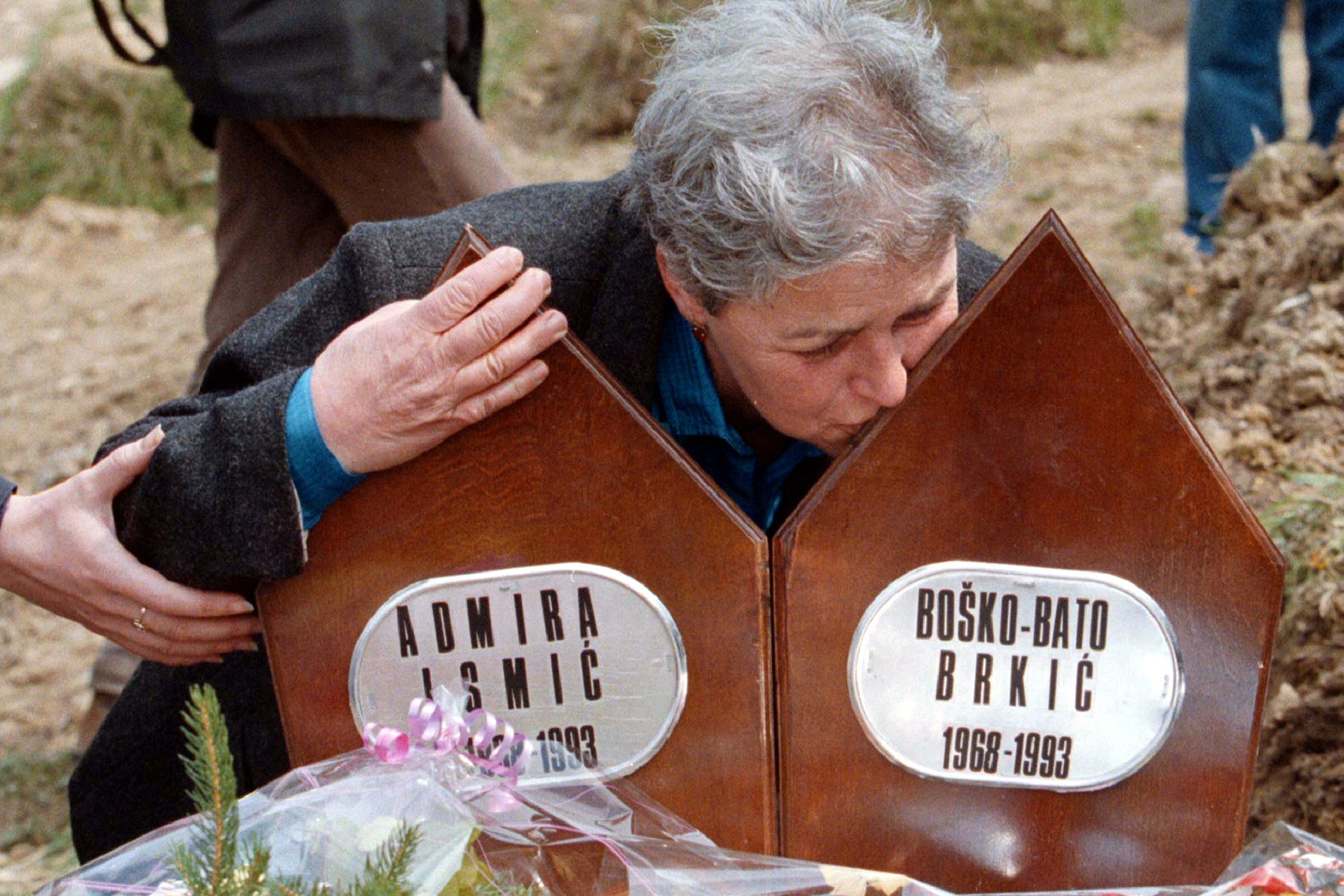 Nera Ismic, mother of Admira Ismic, mourns at the twin grave of her daughter and Admira’s boyfriend, Bosko Brkic, during a funeral ceremony in Sarajevo in 1996. The bodies of the couple were exhumed from an untended grave in a Serb military cemetery and transported back to the reunified city whose wartime horrors they tried to flee. (Peter Andrews/Reuters)

On the anniversary of Brkic and Ismic’s deaths, their shared tombstone at Lion’s Cemetery is covered with flowers. Cerkez, for her part, thinks this is the only physical memorial Brkic and Ismic need. “If they’re still alive in our hearts, why erect a monument?” Cerkez asked. “You erect monuments to things you need to be reminded of.”

The debate about how to remember Brkic and Ismic comes at a time when some worry that Bosnia itself may soon be history. Elections are scheduled take place in October, but the country’s electoral law remains unreformed; in 2016, a Bosnian Croat politician complained that the appointment of Croats from majority Bosniak cantons violated Croats’ rights to representation under the Dayton Accords, the international agreement that stopped the war in 1995. An annex of the accords still serves as Bosnia’s constitution, dividing all levels of government among the country’s three constituent peoples and helping perpetuate the legacy of wartime separation through divided schools, a decline in mixed relationships like Brkic and Ismic’s, and so-called ethnic entrepreneur politicians who benefit from division.

In December 2016, Bosnia’s Constitutional Court agreed with Croat politicians’ complaints and called for a new (and still uncreated) electoral law. Dragan Covic, the Croat representative of the country’s tripartite presidency, has pushed for a version of the law that some worry could create a third territorial entity for the country’s ethnic Croats. It’s feared that this could upset the precarious balance that already exists between the country’s two existing entities: the Bosniak and Bosnian Croat-dominated Federation of Bosnia and Herzegovina and Republika Srpska, the largely Bosnian Serb entity currently led by the bombastic, pro-Russian Milorad Dodik, who has mused about separation and the breakup of Bosnia.

That’s why Brkic and Ismic’s story, and what it means for people in Bosnia and beyond, isn’t just a question about whether to remember or forget the past. It’s a question of whether responding to collective traumas by building monuments and memorials is really the best way to build a new future out of the wreckage of a war that, for Sarajevans like Cerkez, is still far too close to the heart.

Ultimately, trying to officially remember Bosko and Admira may well be the biggest insult to their memory. As the French historian Pierre Nora argues, history is something that’s reconstructed in the present to represent a past that no longer exists. If the slain sweethearts are made into history, memorialized and monumentalized with official government sanction, the very ideas they represent — namely, a multicultural, multiconfessional Bosnia and the power of love to transcend division — would in some ways be relegated to the past forever, rather than made into a symbol of the society that modern Bosnia could once again become.

Michael Colborne is a Canadian journalist who covers Central and Eastern Europe. (@ColborneMichael)