The 2018 tournament has political significance far beyond the field and Foreign Policy is there to cover it. Read FP’s analysis and dispatches on Putin’s P.R. victories, Xi Jinping’s crash program to make China a global player, why Recep Tayyip Erdogan can’t make Turkey’s team great again, how Switzerland and Serbia brought the Kosovo war to the field, Chechen strongmen, Croatian corruption scandals, and how 2026 will tighten North American ties even if Trump tears up NAFTA — and more, here, as the tournament progresses. 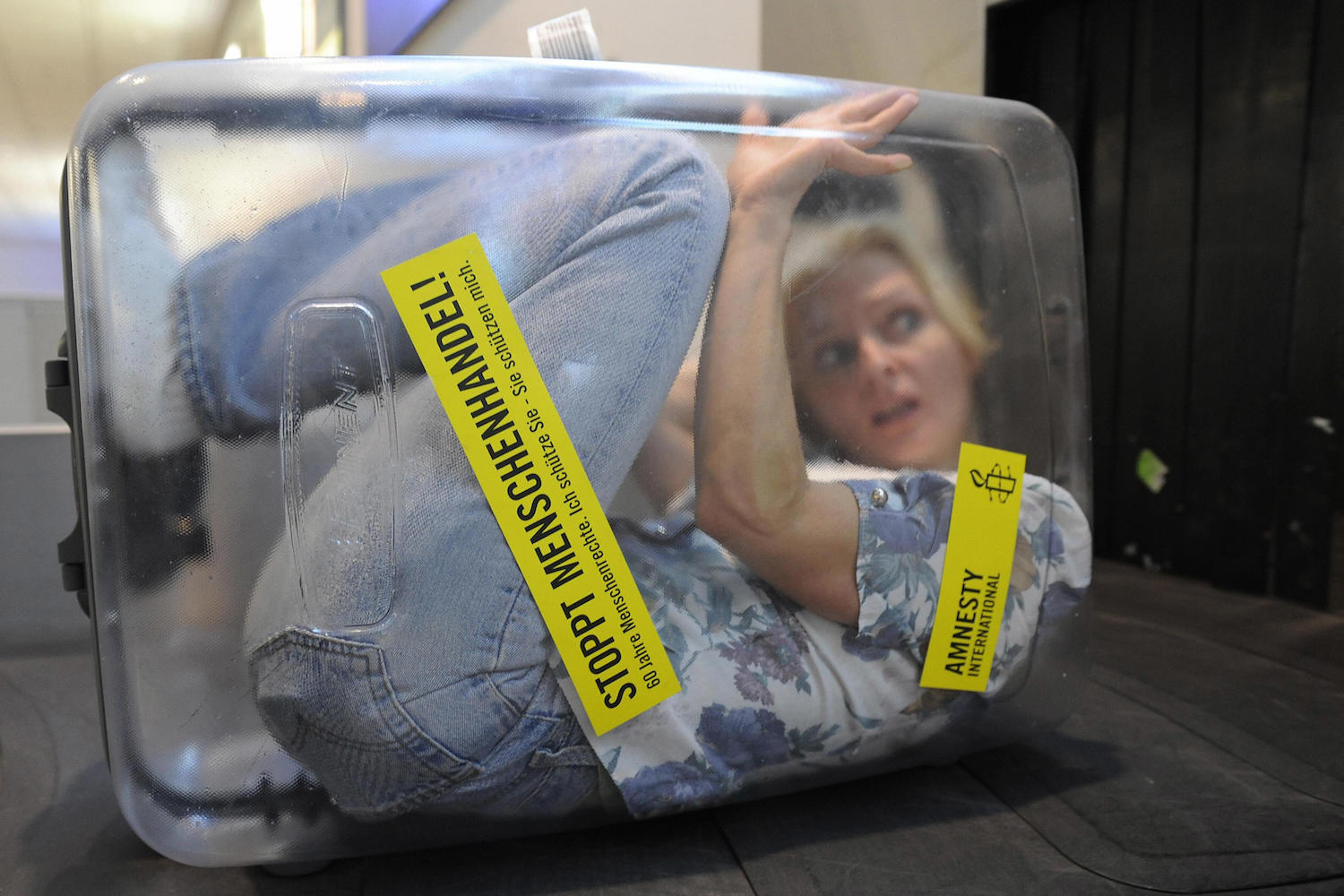 A woman is locked up in a transparent suitcase reading "Stop Human Trafficking! 60 Years of Human Rights" on a luggage belt at the airport in Munich, Germany, on December 11, 2008. The Human Rights organization Amnesty International staged the action to commemorate the 60th anniversary of the Universal Declaration of Human Rights.

Putin Doesn’t Care about Sex Trafficking: Russia could have done something to prevent sexual exploitation of foreign women during the World Cup. It chose not to. by Madeline Roche 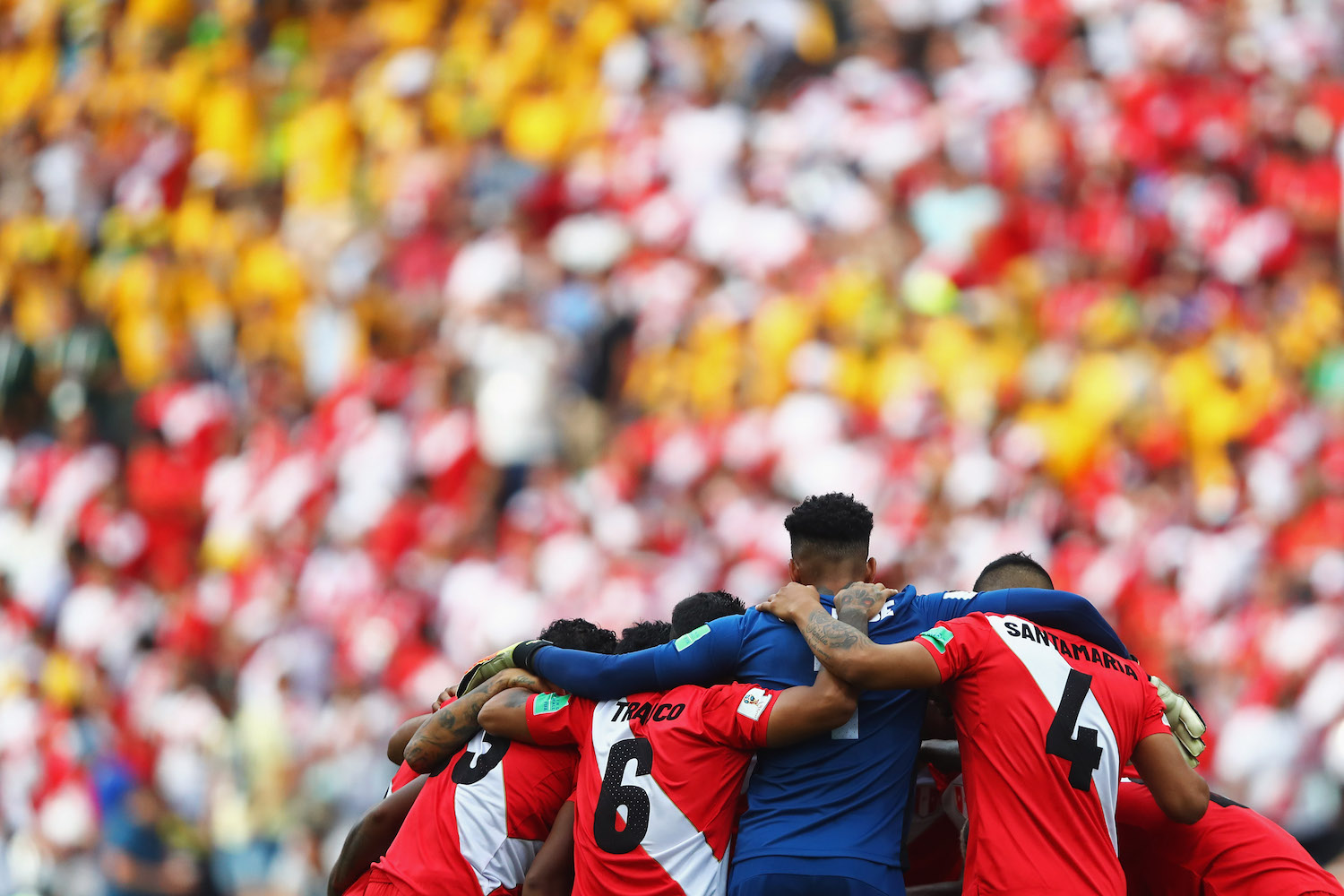 Peru’s National Identity Was Bound Up With Conflict and Corruption for Decades — Then It Qualified for the World Cup:
On our podcast, how a country scores two goals in the soccer tournament and finds redemption. by FP Editors 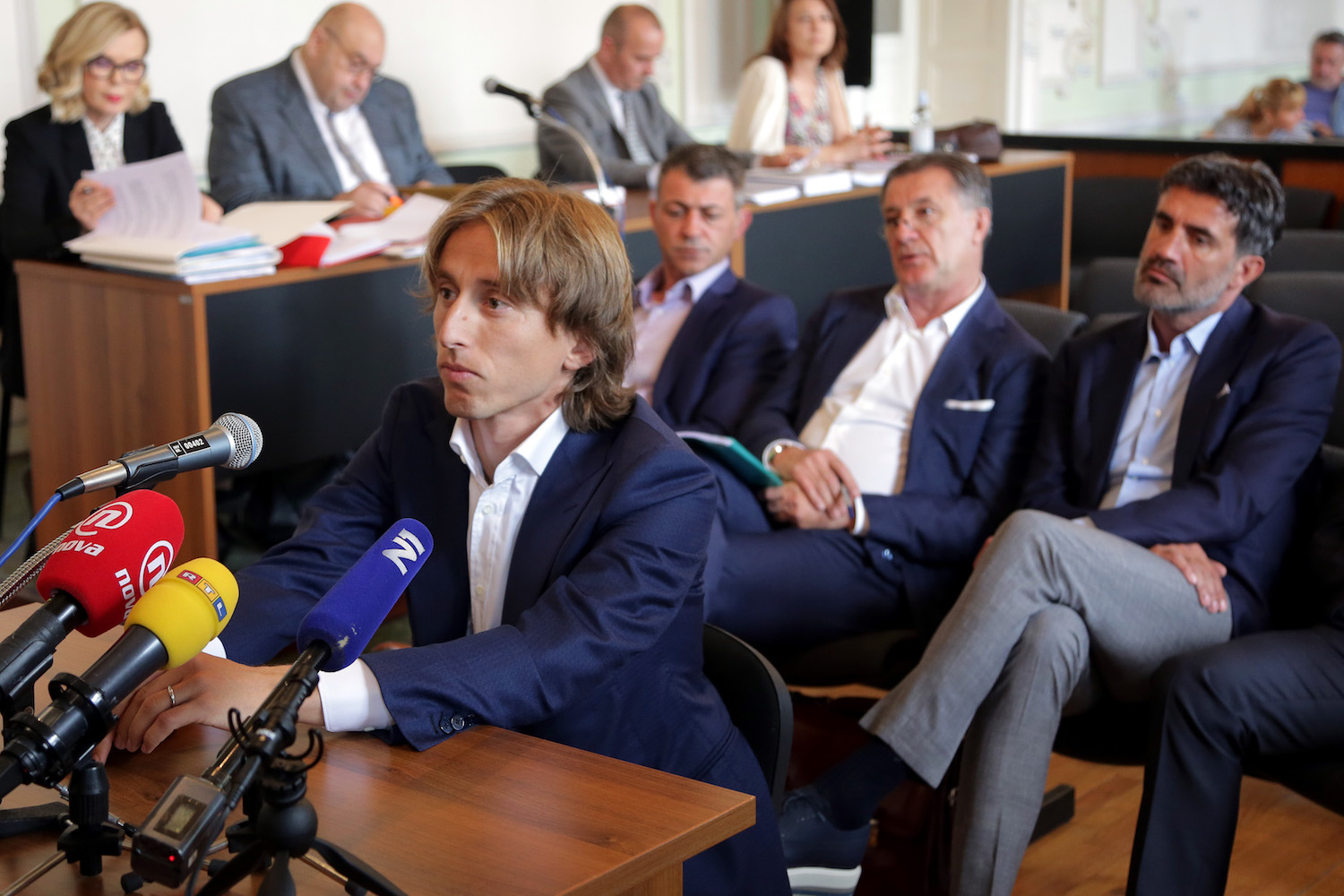 Croatia and Real Madrid midfielder Luka Modric appears in court to testify in a corruption trial in Osijek, Croatia, on June 13, 2017. (STR/AFP/Getty Images)

Croatia’s Soccer Stars Should Be Heroes. Instead, They’re Hated: A corruption scandal involving the country’s top club and the national team’s captain has enraged Croatian fans. by Matthew Hall 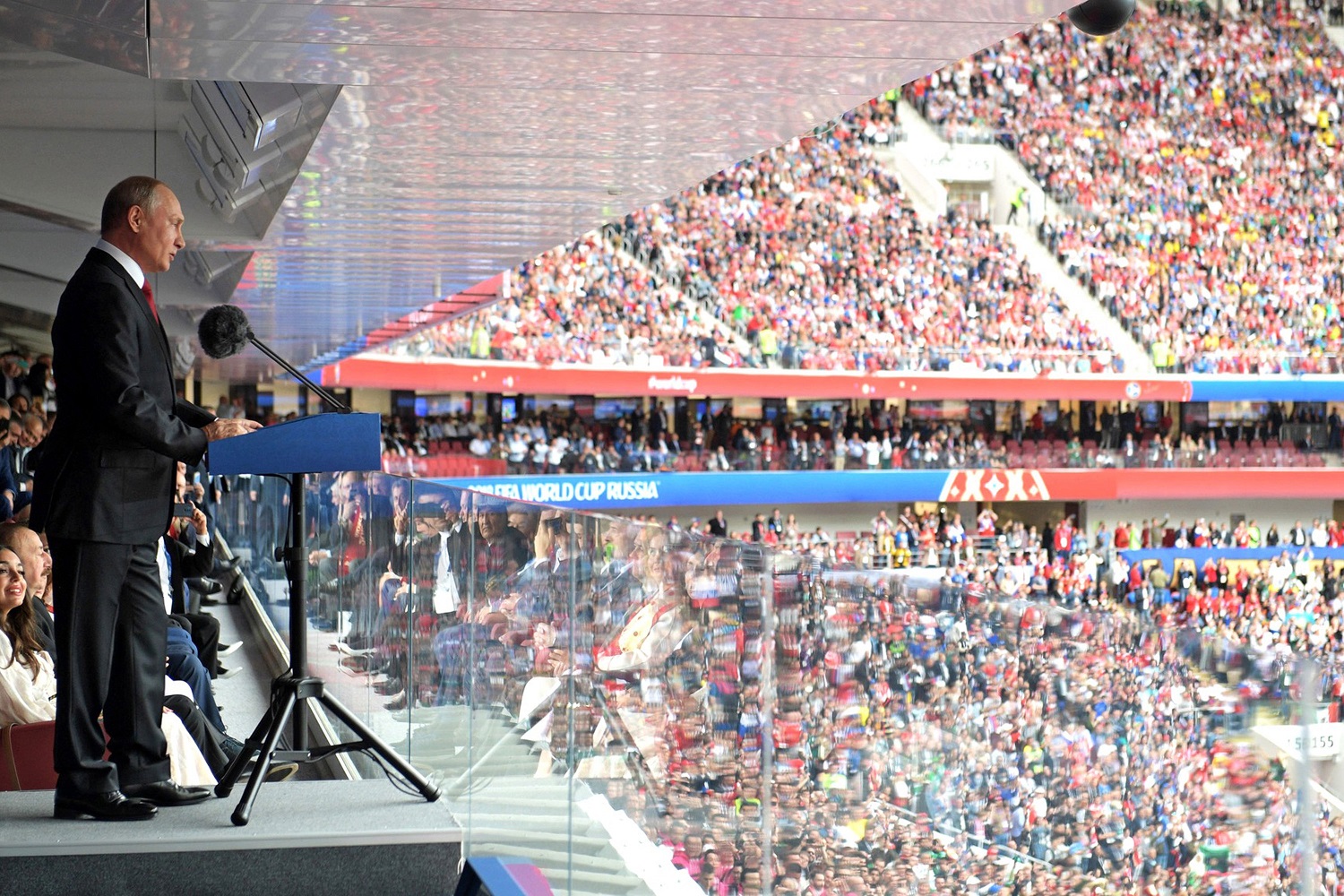 Russian President Vladimir Putin speaks prior to a World Cup match between Russia and Saudi Arabia on June 14 in Moscow. (Pool/Getty Images)

Russia’s Goals Won’t End With the World Cup: An emboldened Putin is ready to seize the opportunities Trump has given him. by Daniel B. Baer 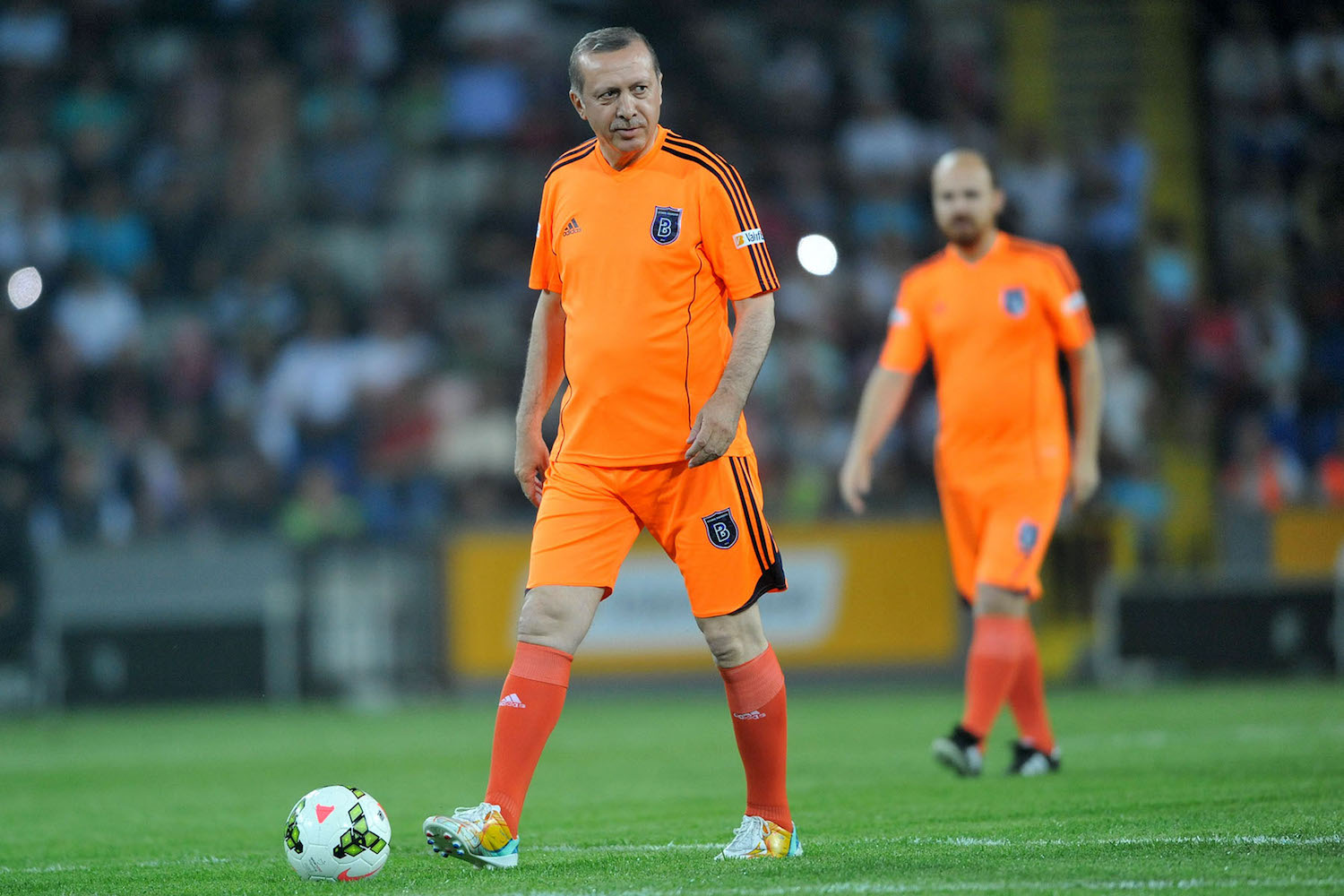 Turkish leader Recep Tayyip Erdogan plays soccer during an exhibition match at the Basaksehir stadium in Istanbul on July 26, 2014.

Captain Erdogan Can’t Help the Turkish Soccer Team: With so much political, social, and financial capital invested in its national squad, why can’t Turkey qualify for a World Cup? by Patrick Keddie 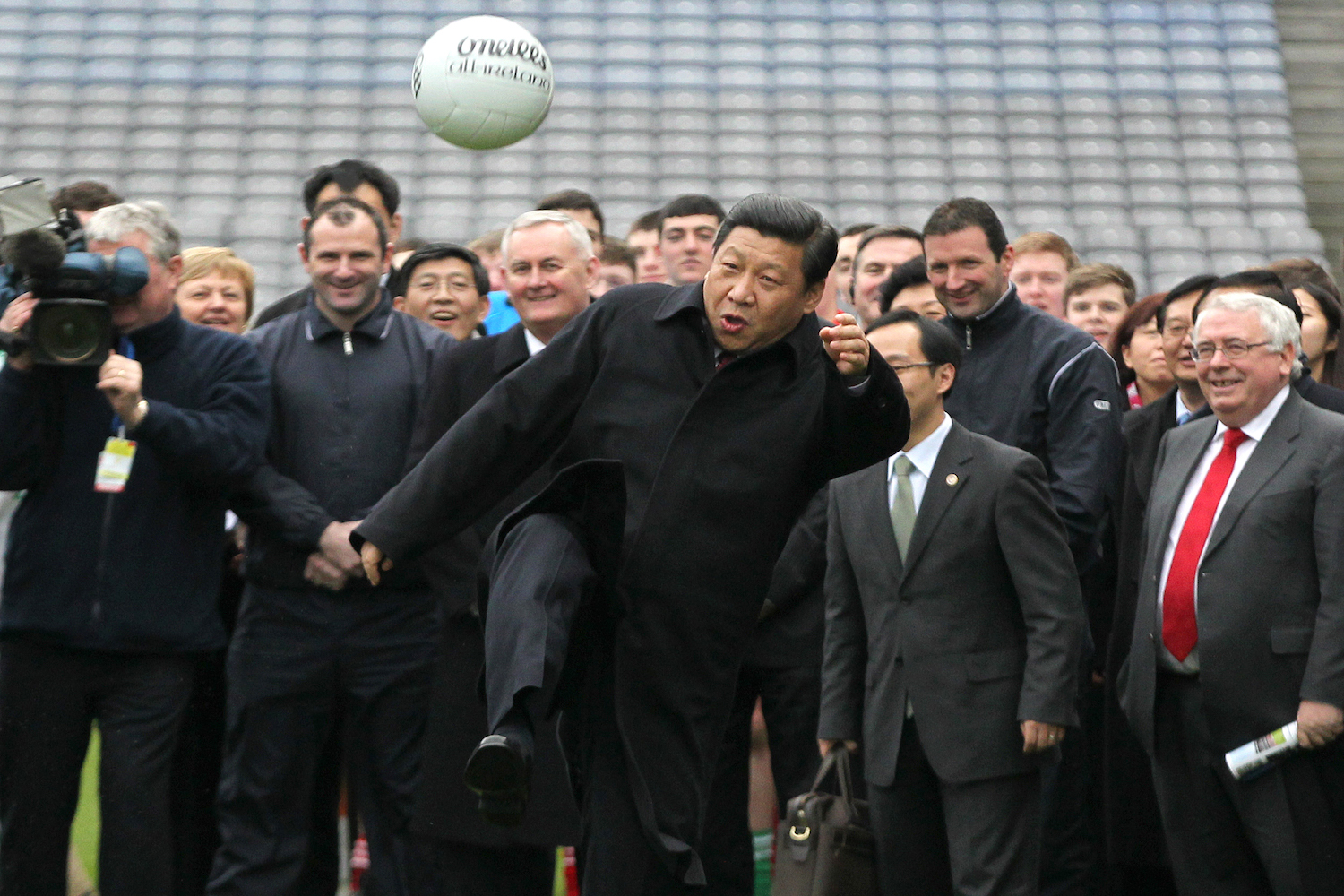 Xi Jinping Is the World’s Most Powerful Soccer Coach: China’s team is a national embarrassment — but the party chairman has big plans for the game. by Jonathan White 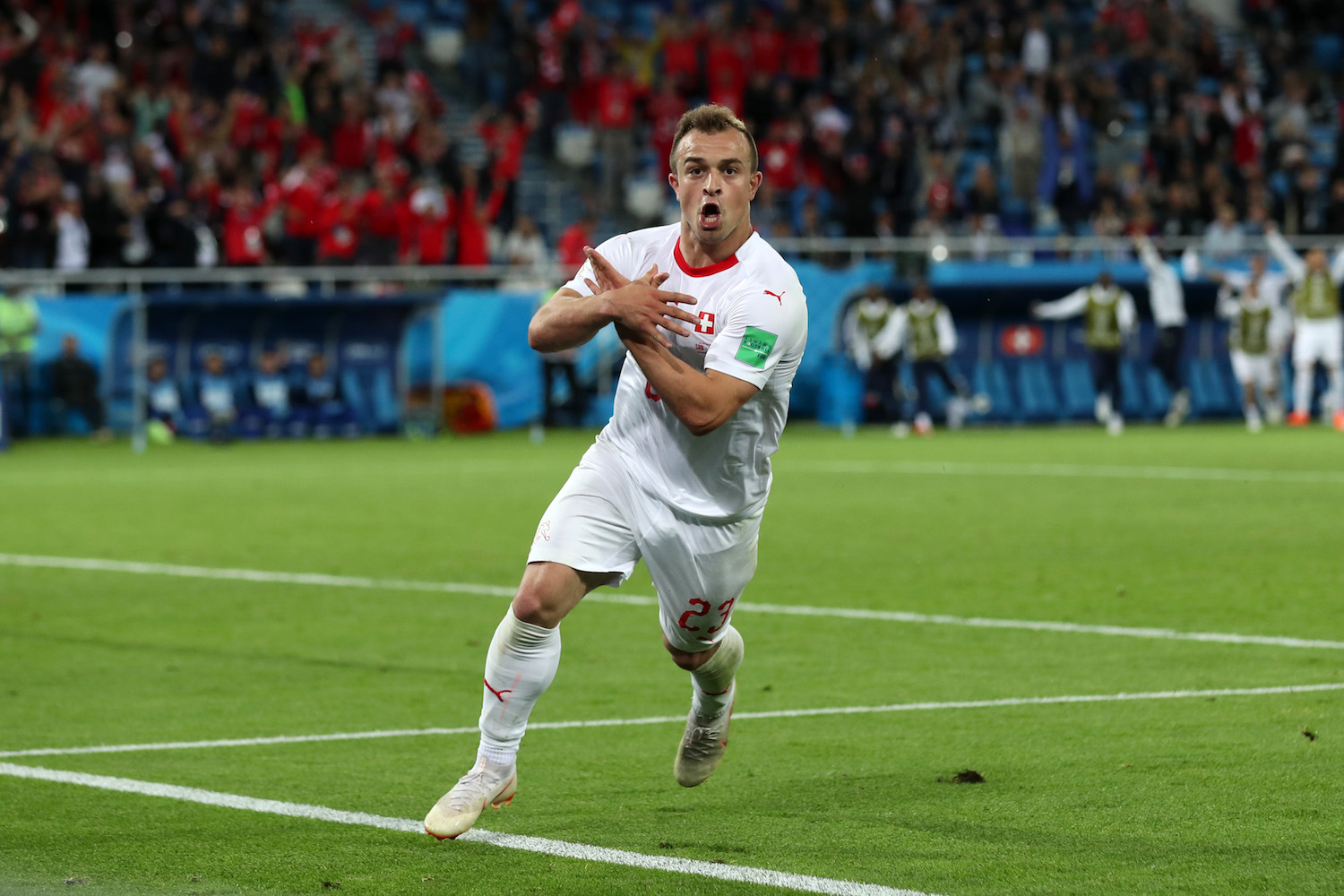 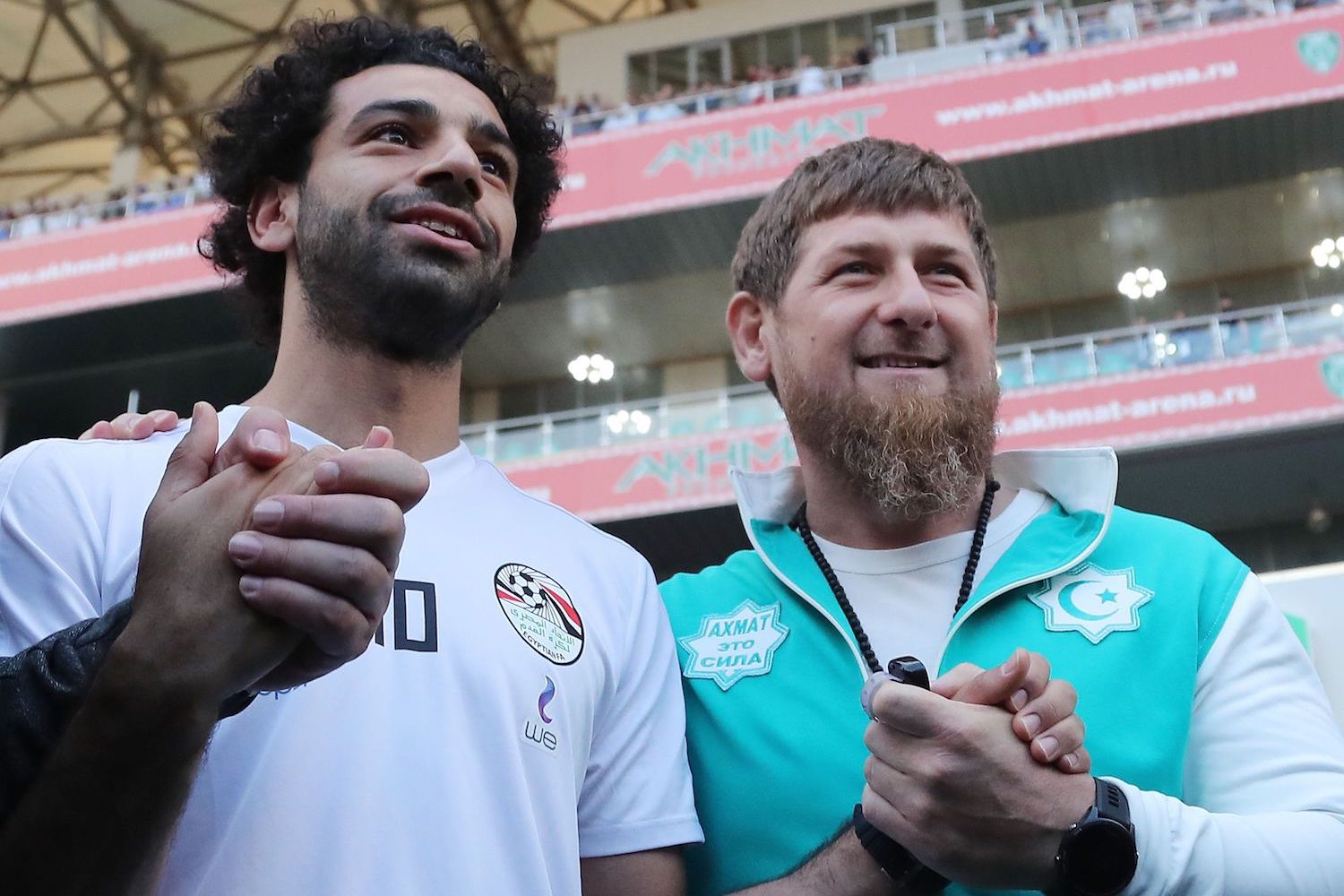 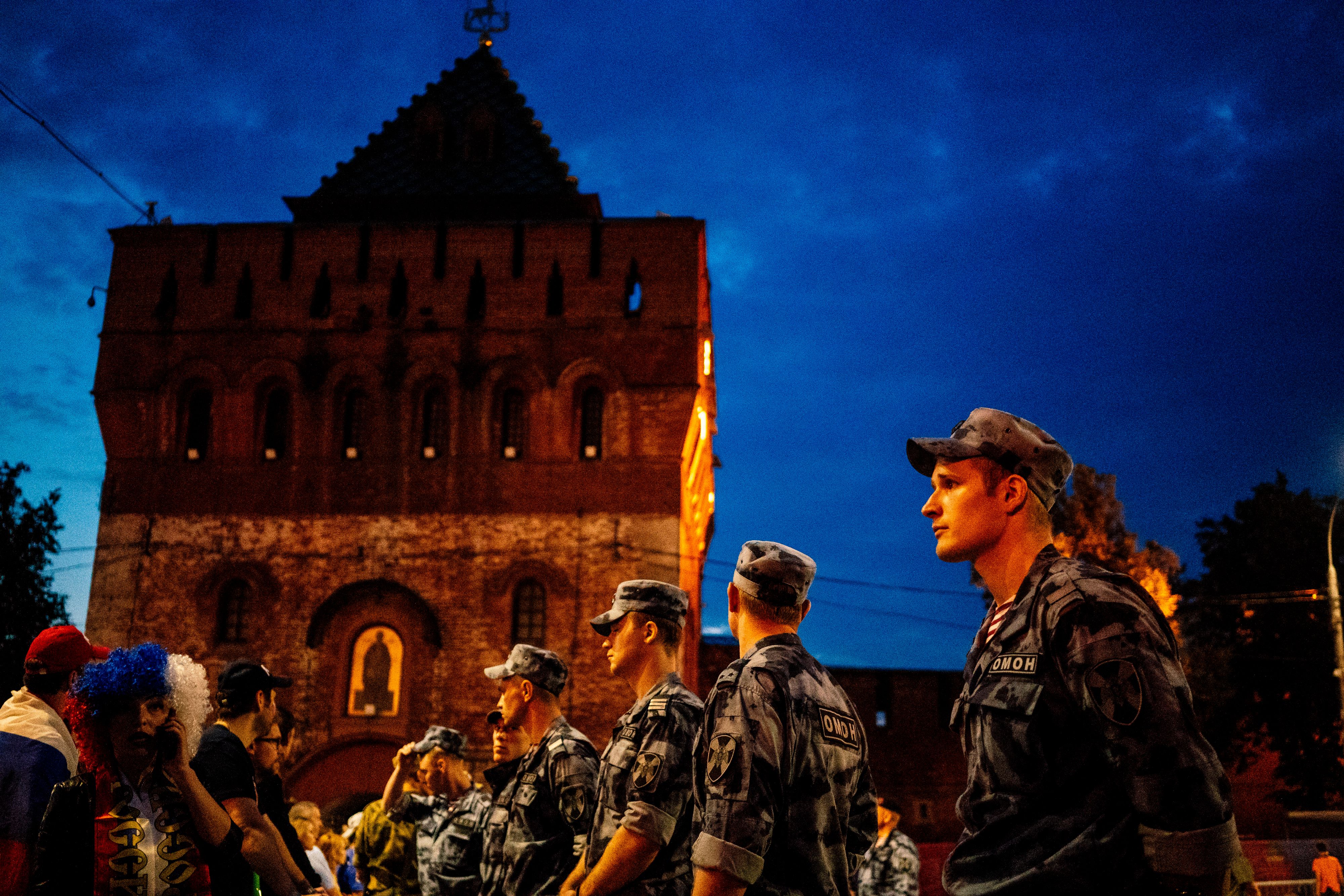 Russian security officers stand guard at the Fan Fest zone in Nizhny Novgorod, one of the host cities of the Russia 2018 World Cup, on June 19. (Dimitar Dilkoff/AFP/Getty Images)

Russia’s World Cup Isn’t as Safe as It Looks: The Kremlin has prepared for the soccer tournament by cracking down on terror threats — the wrong kind. by Neil Hauer 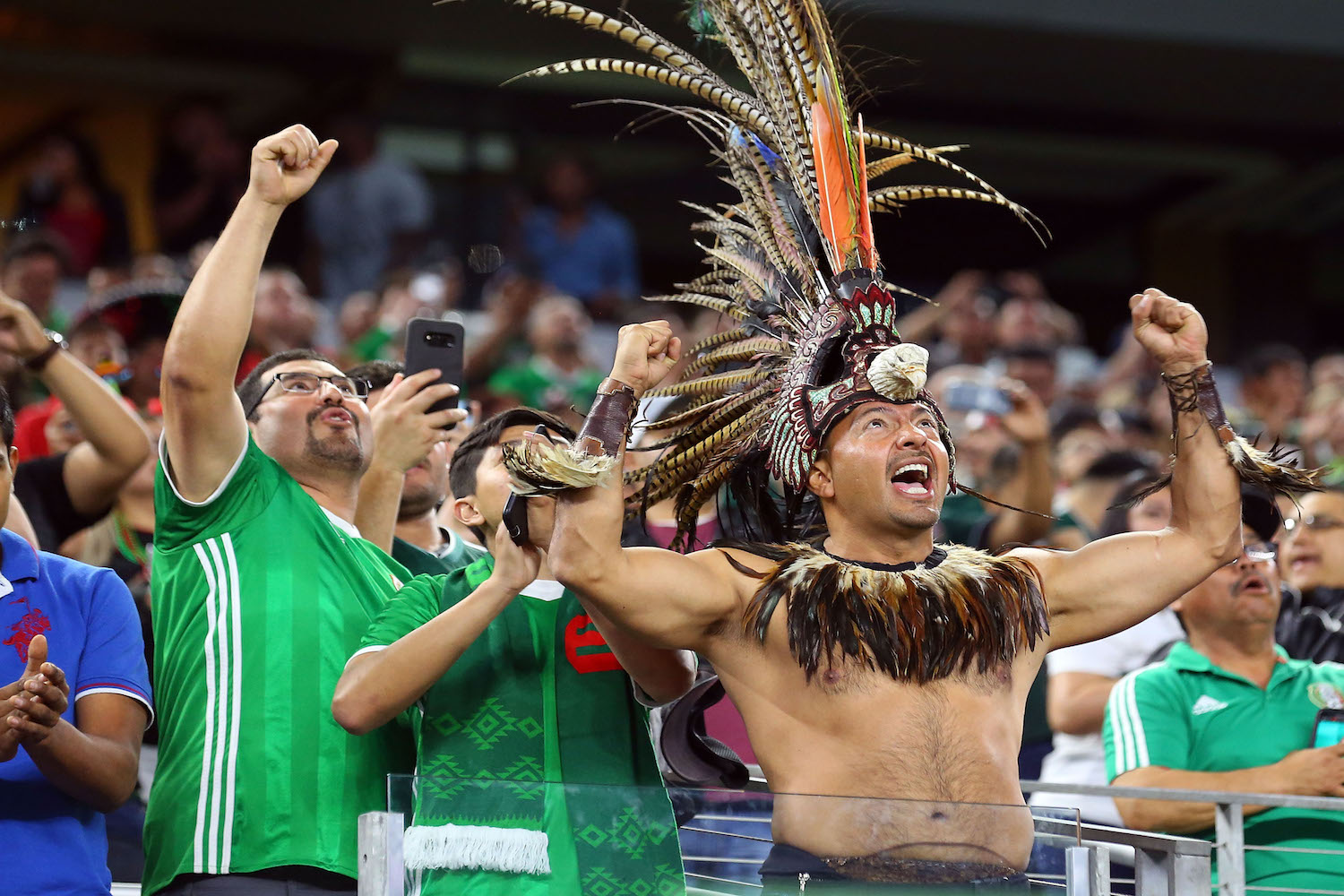 Fans cheer for Mexico during an international friendly soccer match against Croatia at AT&T Stadium on March 27 in Arlington, Texas. (Richard Rodriguez/Getty Images)

If Trump Tears Up NAFTA, Sports Will Keep North America Together: The joint 2026 World Cup is yet another sign that Canada, Mexico, and the United States are becoming increasingly culturally and economically interdependent. by Andrew Selee

Washington’s relationship with the YPG is a useful foil for the Turkish president ahead of the 2023 election.