From Japan to the United Kingdom, developed countries face a two-pronged problem: aging populations and a deepening hostility toward the immigrants who could keep their aging economies growing. One country may have found the answer to both. In South Korea, a top-down campaign begun in 2005 to remake the nation’s ethnic self-image has had remarkable results. In less than a generation, most South Koreans have gone from holding a narrow, racial concept of nationality to embracing the idea that immigrants of Chinese, Nigerian, Vietnamese, or North American descent can be as Korean as anyone else.

Part of what makes South Korea’s story so striking is its speed. Until the early 2000s, the country’s textbooks, immigration policies, and national imagery had placed a heavy value on the purity and unity of what was known as the Korean bloodline. The fixation with national uniqueness stemmed in part from the 20th-century trauma of Japan’s 35-year occupation, during which Koreans were portrayed as a subordinate part of a wider Asian empire. After Japanese rule was lifted in 1945, educators in the newly created South Korea drew on the works of independence activists such as Shin Chae-ho, who claimed that the Korean race-nation (minjok) had existed for millenniums, in writing the country’s new textbooks. Ethnonationalist rhetoric became commonplace among both teachers and politicians.

But in 2005, the national mood began to shift. Korean society was aging, with the fertility rate dropping to just 1.08 births per woman, a historic low. South Korean men were responding to the demographic decline by increasingly seeking foreign brides from poorer neighbors — first from China and then, as China got richer, from Vietnam and Cambodia.

That year, the total percent of marriages to foreigners was already 13.6. In some areas, such as North Jeolla, nearly 50 percent of Korean men were marrying Chinese women. At the same time, prejudices remained strong: Children regularly verbally abused their mixed-race classmates, sometimes with teachers’ approval. One Korean-American blogger, on his popular left-leaning English-language site Ask a Korean!, said gloomily that he feared the prospect of race riots if attitudes didn’t change.

Such fears prompted the formation of the Presidential Committee on Aging Society and Population Policy, which pushed a pro-natalist agenda, including increased child care and tax breaks for parents. But the South Korean media also began to host fervent discussions of multiculturalism. In 2005-2006, the number of articles on the topic tripled from previous years. The media shift was echoed by a change in policy from the top, initially driven by President Roh Moo-hyun. The campaign then crossed ministerial divisions and party lines, surviving the changeover from the liberal Roh administration of 2003-2008 to the more conservative administration of President Lee Myung-bak. Lee’s government sought both to persuade the public to embrace immigrants and to promote integration by educating new foreign-born brides in the intricacies of Korean culture. The Ministry of Gender Equality and Family simultaneously started a campaign to persuade the public to accept multiculturalism. Immigration commissioners and the presidential committee on aging set multiculturalism as a national priority to combat a maturing society. South Korea was to become a “first-class nation, with foreigners” — a phrase echoed throughout government documents and speeches. 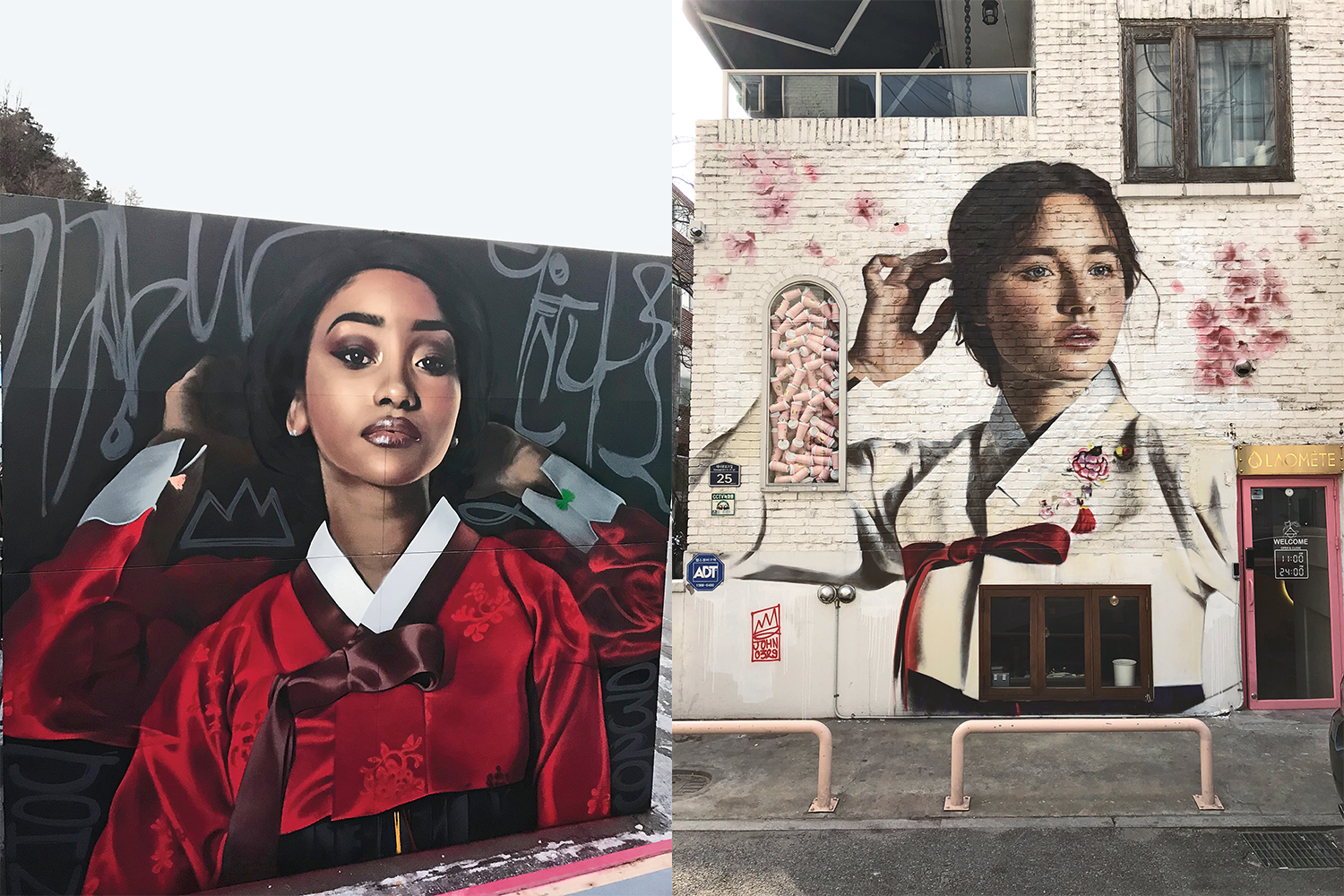 Shim’s works, such as these in Seoul, depict women of diverse ethnicities wearing the traditional Korean hanbok. (Royyal Dog)

The campaign rapidly picked up pace, especially after the passage of the 2008 Support for Multicultural Families Act. The bill increased the national budget for multicultural programs from just $96.9 million a year in 2009 to $197.5 million by 2012. South Korea also held in 2008 its first Together Day, a nationwide festival designed to make multicultural families feel more accepted, mixing ads of happy children and parents with talent shows and cultural displays. Not every move succeeded: Explicit anti-discrimination legislation was blocked repeatedly in the National Assembly.

Then, in 2009, the Ministry of Justice established the Korea Immigration and Integration Program to smooth the route to citizenship for foreign residents — one previously accessible only to a few professional elites — by introducing a clear points system. Official materials began to promote the term damunhwa (multicultural) to describe mixed families, since honhyol (mixed blood) had taken on derogatory connotations. Politicians spoke of multiculturalism in glowing terms; in a 2010 speech to the nation, then-President Lee described all foreign brides as his own daughters-in-law. Public school teachers received training in how to address the bullying of mixed-race children, and images of multicultural families started to appear on posters in government offices.

The language introduced in 2005-2006, and backed up by later legislative action, produced a striking change in attitudes. By 2010, the Korean Identity Survey, a national poll run by two research institutes and a South Korean newspaper, found that more than 60 percent of Koreans supported the idea of a multicultural society. As of July 2016, more than 2 million foreigners lived in South Korea, up from just 536,627 in 2006. The country elected its first lawmaker of foreign birth, the Philippine-born Jasmine Lee, in 2012. By 2020, an estimated one-third of all children born in South Korea will be of mixed South Korean and other Asian descent.

Local efforts across the country have matched the government’s top-down publicity campaign. “South Korea’s system to dispatch counselors to help multicultural families has helped a lot of people,” said Shin Suk-ja, the head of the Multicultural Family Support Center group, a network of 218 offices across the country that provides aid to immigrant families. Popular culture has also embraced the idea of a multicultural society. Some of the country’s most popular young stars are Koreans of African descent, such as Han Hyun-min, a Nigerian-Korean teenage model who shared his story on the TV series My English Puberty of being sacked from a modeling job because he only spoke Korean, not the English that his appearance suggested. In 2016, Jeon So-mi, then a 15-year-old Canadian-Korean, won the popular talent competition show Produce 101 — probably in part because the voting audience at home saw her foreignness as cool.

Despite the success of the government’s multicultural campaign, there has been some backlash in recent years. Between 2011 and 2015, the Korean Identity Survey polling data revealed an increase in public concerns about multiculturalism, with support dropping to 49.7 percent. The data also showed that many Koreans associated foreigners with crime, job losses, or a greater tax burden. Academics and activists have criticized the government for reinforcing the sexist stereotype that multicultural families mean a Korean man and a foreign woman.

Lee, the country’s first foreign-born lawmaker, says she generally supports the government’s overall approach but the presence of mixed-race Koreans themselves will be what ultimately transforms society. She points to the Korean-African-American football star Hines Ward, who plays a powerful role in improving public perceptions, and adds that if there were more internationally renowned athletes from multicultural backgrounds, they would further improve ordinary people’s image of multiculturalism.

A majority of South Koreans now see immigration as essential to their country’s future — both as a thriving economy and as a modern, advanced nation. Other aging nations looking to ensure their future economic health would do well to consider making similar efforts to convince their citizens that the best path to success stems from diversity.

Ga-young Park is a journalist based in Seoul.
Tags: Culture, South Korea

How a Girl Band May Unify Korea

How to solve the Korean crisis through the power of kitschy, hyperpatriotic pop music.

South Korea’s new president doesn’t need a hawkish North Korea policy — he needs the only one with a track record of success.

It’s not a system based on chance, it does not encourage our enemies, and it can’t be addressed in 140 characters.