The Occupation as Entertainment

The second season of the acclaimed TV thriller “Fauda” obscures the dark realities of Israeli rule in the West Bank.

The producers of the Israeli television drama Fauda launched the second season of their popular show late last year with an ominous billboard campaign. Posted overnight in several cities around Israel, the billboards featured two sentences in Arabic script against an all-black background: “We are coming to get you” and “The action begins soon.” (The wording varied from sign to sign.) Nothing about the billboards suggested that they were advertisements for a TV series, and, to some Israelis, they looked like flags of the Islamic State: dark and menacing. The mayor of at least one city ordered them removed. But, to me, the billboards looked like something else altogether: a fearmongering campaign by Jews against Palestinians. They reminded me of Israel’s 2015 election, when Prime Minister Benjamin Netanyahu exhorted Jewish Israelis to get out and vote because Arabs were “going to the polling stations in droves.”

Fauda is about an Israeli undercover unit, whose members pose as Arabs as they charge through the West Bank breaking up cells of Palestinian militants and thwarting suicide bombings. The name itself means “chaos” or “mess” in Arabic. In the series, team members use it as a code word to signal that their identities have been blown during a clandestine operation. The show is suspenseful and often surprising. Some Israeli heroes die, and some Palestinian characters are portrayed at least somewhat sympathetically (though mainly when they are victims of Palestinian extremists). The first season was praised by critics and loved by viewers in Israel. The New York Times named it one of the best TV shows of 2017, and Netflix snapped up the rights to the second season, releasing it in May.

The problem with the series is that it purports to say something authentic and honest about the Israeli-Palestinian conflict. Its creators — one of whom, Lior Raz, is a veteran of a real undercover unit in the Israeli military — have touted it as balanced and fair, the kind of show that should resonate with Palestinians as well as Israelis. In reality, however, Fauda depicts a sanitized version of the occupation of the West Bank, where Israeli soldiers have ruled over millions of disenfranchised Palestinians for more than half a century. The show’s success represents yet another victory for Israeli hasbara — the Hebrew term for public diplomacy or propaganda.

The deception begins with the show’s very conceit. According to the rules of the action genre, antagonists must be worthy opponents, strong enough to offer a real threat and challenge to the protagonist. But even casual followers of the Israeli-Palestinian conflict are aware of the power imbalance between these real-life adversaries. It’s true that Palestinians can inflict pain on Israelis. But they have no state, no army, no warplanes or tanks. To make the playing field appear more even, Fauda’s creators have had to resort to unlikely plot devices. In the first season, the Palestinians plan a sarin gas attack in Israel. In the second, their armed wing falls under the command of a terrorist who has just returned from fighting for the Islamic State in Syria.

The veteran terrorist, known as Al-Makdasi, is the son of a Palestinian religious leader killed in the first season by members of the Israeli unit. Al-Makdasi spends much of the second season exacting revenge against the show’s star, the agent Doron Kavillio, by targeting his father and his young children. Al-Makdasi and many of the other Palestinian characters are driven mostly by a craving for revenge or money. They are often treacherous and conniving. At various points, they betray their comrades, wives, and family members. They are liars and manipulators who exploit those closest to them for personal gain.

In contrast, Fauda largely depicts its Israeli heroes as rational and virtuous. They’d prefer peace but fight to protect their country’s innocents. The Palestinians leave them no alternative to violence — a notion that doesn’t exactly comport with reality, in which successive Israeli governments have provocatively tightened the country’s grip over the West Bank by settling more and more Israelis there. In the series, war is forced on the Israelis and causes them much moral anguish, leading to heart-to-heart conversations about therapy and post-traumatic stress. “How do you say ‘post-trauma’ in Arabic?” one Israeli asks a buddy from the unit during an intimate moment. “Bost-trauma,” his teammate answers — poking fun at native Arabic speakers, who have a hard time pronouncing the letter peh in Hebrew. Israeli viewers probably saw the exchange as a comic aside. To many Palestinians, it came across as gratuitous, a mean-spirited bit of mockery. Fauda excludes the possibility of post-traumatic stress among Palestinians. They can’t even pronounce the word. 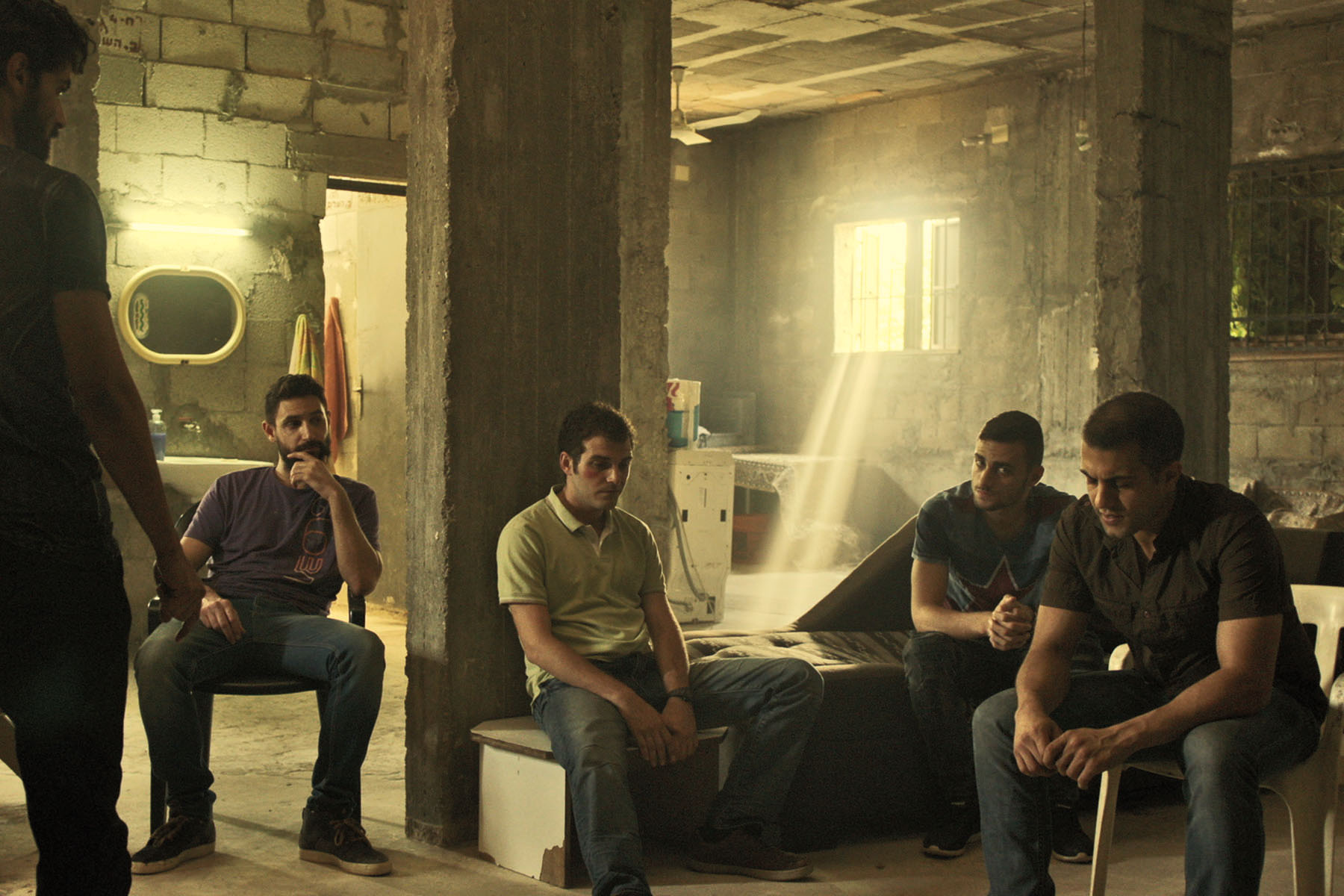 In Fauda’s second season, a group of Palestinians who have formed a terrorist cell in the West Bank falls under the command of Al-Makdasi (Firas Nassar), far left, a former fighter for the Islamic State in Syria. (Netflix)

A particularly painful theme for a Palestinian compelled to watch the series is the attitude displayed toward Palestinian women, most of whom are seen wearing the hijab. These women are portrayed as victims solely of the men in their community — Palestinian men, that is, not Israelis. To be sure, parts of Palestinian society remain patriarchal, and women do not enjoy full equality. But to depict an Israeli fighter as the redeemer of the Palestinian woman is a pernicious lie and smacks of colonialism. In one especially grating scene in the second season, members of the Israeli unit have their cover blown in the West Bank town of Nablus. A Palestinian mob attacks and tries to rape a female agent disguised as a Palestinian, complete with a headscarf, giving the impression of Palestinians as barbaric predators. Her attackers chant, “Itbah al-Yahud!” — “Slaughter the Jews!” That phrase has long been a fearmongering staple of the Israeli narrative about bloodthirsty Palestinians — despite the fact that, in reality, Palestinians don’t tend to use it.

Kushner’s Peace Plan Is a Disaster Waiting to Happen

By cutting aid to Palestinian refugees, the United States is undermining stability in the entire region.

What if ‘The Wire’ Were Set in Ramallah?

A hit TV series has found audiences among Israelis and Palestinians alike with its brutal honesty about the ugliness of war and the complexity of human life.

The most galling thing about Fauda is what the series chooses to hide. It shows no settlements, no Jewish extremists who abuse Palestinians and seize their land with either passive or active help from the government. The show includes no shots of the separation barrier that blocks farmers from their crops or of the checkpoints that restrict Palestinians’ daily movements. There are no home demolitions, no land expropriations, and no expulsions. In Fauda, the unit never arrests underage boys and girls. Soldiers don’t barge into Palestinian homes in the dead of night. No Israeli snipers celebrate after shooting unarmed Palestinians. Viewers never see the West Bank roads earmarked exclusively for Jewish drivers. Nor do they see Palestinians who have been deprived of their civil rights. Fauda depicts no poverty and no refugee camps. On the contrary: Its Palestinians for the most part live in luxurious homes. Fauda treats the occupation as a given, a divinely created reality. It offers no history, no context, and no hint of a possible solution.

As a Palestinian-Israeli, I find it truly painful to think that viewers around the world might believe Fauda contains even a smidgen of truth about the lives of Palestinians. How can I not take umbrage when Israelis purport to speak for Palestinians while perverting their story — and receive international attention and acclaim in the process?

Which brings me back to the Islamic State. Despite its star turn in the show’s second season (the character Al-Makdasi appears in almost every episode), the truth is that the group has made few inroads into Palestinian society and has played no role in the Palestinian struggle against Israel. Yet that inconvenient truth seems not to bother Fauda’s creators. Just the opposite: Focusing on the Islamic State was a canny way to extend the show’s international appeal into countries that care little about ordinary Palestinians. By introducing the terrorist group, Fauda allows viewers in the United States and Europe to see Al-Makdasi as their own enemy — and revel in the heroism of the brave Israelis who protect them from the
barbarians.

Kushner’s Peace Plan Is a Disaster Waiting to Happen

By cutting aid to Palestinian refugees, the United States is undermining stability in the entire region.

What if ‘The Wire’ Were Set in Ramallah?

A hit TV series has found audiences among Israelis and Palestinians alike with its brutal honesty about the ugliness of war and the complexity of human life.