Those Who Dare to Bare Their Hair

Masih Alinejad is helping Iranian women challenge the regime — one hijab at a time.

Masih Alinejad hasn’t lived in Iran for a decade. But that hasn’t stopped her from becoming the driving force behind the largest, most sustained civil disobedience movement that the country has seen in recent years.

Her focus is the mandatory headscarf, which Iranian women have been obligated to wear since the 1979 revolution. Her followers inside Iran number in the thousands. When Alinejad’s campaign against the compulsory hijab began in 2014, women who joined her first posted pictures of themselves on social media with their heads uncovered but their faces turned away from the camera. Now some even speak directly to the camera in videos that show them walking, unveiled, on Iranian streets or pushing back against the morality police. Men have begun joining as well, voicing their support or donning the veil in solidarity with women who are forced to wear it.

Every day, followers send Alinejad pictures and videos via Facebook, Instagram, and Telegram, the messaging app favored by many Iranians for its enhanced security. (Twitter is banned in the Islamic Republic.) Alinejad, who has lived in Brooklyn since leaving Iran in 2009, then spends hours reposting the images to her millions of followers on social media.

“We have been forced to wear a fake identity. We were told this was our culture, our identity, but it’s not. We were told, ‘You will go to hell if you don’t wear the hijab.’”

“We have been forced to wear a fake identity,” Alinejad said this spring over dinner in Brooklyn. “We were told this was our culture, our identity, but it’s not. We were told, ‘You will go to hell if you don’t wear the hijab.’”

Her campaign has unnerved Iranian authorities, with good reason. The simmering unrest over the country’s dress code for women cuts across a wide swath of society. As an ideological pillar of the revolution, the hijab became a core part of the country’s identity in 1979, and it has been used as a tool for forced cohesion ever since.

Alinejad’s efforts have also attracted the criticism of some Iranians living abroad who believe she is feeding Islamophobia by focusing on the veil. They accuse of her playing into the hands of U.S. policymakers intent on regime change in Iran.

Yet Alinejad isn’t an outside critic; she is a product of the same Islamic Republic she now protests. She was born in a small village not far from the Caspian Sea, the youngest of five in a poor, deeply conservative family that fervently embraced the revolution that swept Iran when she was 2 years old. As a child, she wore the hijab even while she slept. Her father briefly joined the Basij — the paramilitary volunteer force in charge of internal security and policing morals — which destroyed music tapes and confiscated alcohol. One of her brothers was severely injured in the Iran-Iraq War in the 1980s. Her mother and sister both still wear the veil by choice. Although they do not back Alinejad’s campaign, they remain supportive of her. 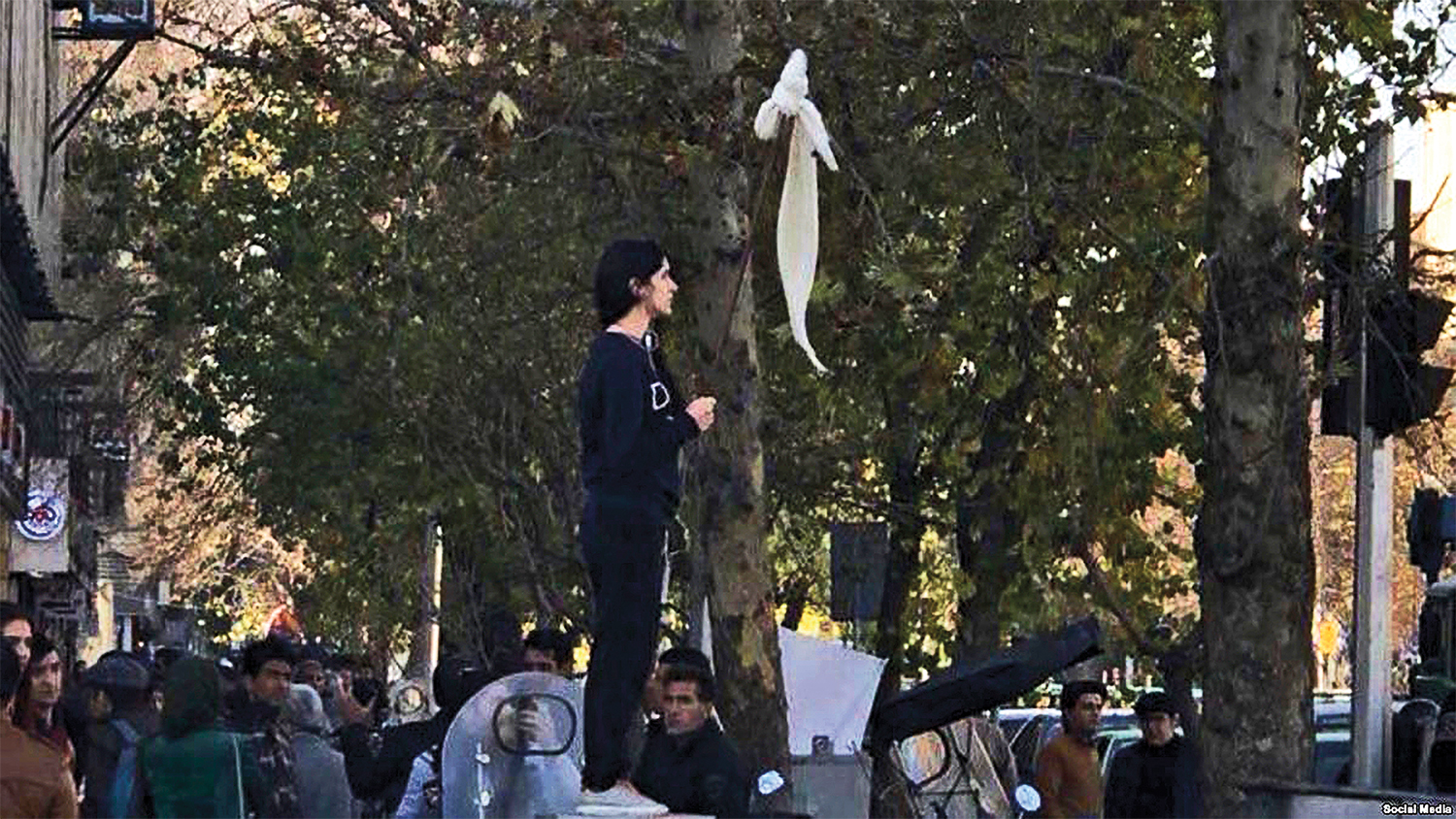 In an image that went viral worldwide, Vida Movahed stands on a utility box on Tehran’s central Enghelab Street, waving her hijab on a stick to protest the mandatory headscarf on Dec. 27, 2017. Movahed became known as “The Girl of Enghelab Street,” sparking a series of similar protests. (SIPA via AP)

Alinejad was rebellious from a young age, always challenging her parents about the things girls weren’t allowed to do in revolutionary Iran, such as sit next to boys in school or bike in public. At 19, she was arrested along with a group of friends and her then-fiancé and spent a month in prison for distributing pamphlets calling for greater freedom in Iranian society. By 2000, she had been married and divorced, had lost custody of her son, and was living in Tehran alone, doing odd jobs. Thanks to the help of friends, she was hired as an intern by a reformist newspaper despite her lack of university degree. She became their parliamentary reporter.

As a young journalist, Alinejad says she didn’t see the hijab or even the chador, the full-body black robe worn by many women in Iran, as an obstacle to her work; she believed she could challenge the system from within, even from underneath a piece of cloth. To some degree, that was true. She exposed several corruption scandals, including a slush fund for parliamentarians; she created a controversy by publishing their salaries and revealing they had not taken a promised pay cut. She drew the ire of the authorities, who put pressure on her newspaper to fire her.

Alinejad used to think that “first you change the nature of the regime, then you deal with the hijab,” but those three years covering parliament brought her to believe that the head covering was in fact central to the Iranian regime’s hold on power.

She used to think that “first you change the nature of the regime, then you deal with the hijab,” but those three years covering parliament brought her to believe that the head covering was in fact central to the Iranian regime’s hold on power. Iranian legislators, she recalls, often deflected her toughest questions by focusing on small strands of hair that escaped from under her veil, telling her they would answer her questions only if she practiced “good hijab.”

In 2005, as reformist winds died down under hard-line President Mahmoud Ahmadinejad, Alinejad was barred from entering the parliament lobby. She shifted to writing a column and, three years later, left Iran to study English in London. In 2009, the Green Movement, the largest series of protests the Islamic Republic had ever seen, erupted in Iran in response to the re-election of Ahmadinejad. Alinejad had returned to the country to report on the elections, but Iranian border authorities told her she could face detention if she stayed in the country. She left.

Her campaign against the mandatory hijab started accidentally. In 2014, Alinejad posted a picture of herself on Facebook with the wind blowing through her hair in London. (Her new memoir is titled The Wind in My Hair.) She received comments from women in Iran telling her how envious they were of her freedom. In response, Alinejad posted still more images of herself to Facebook, similarly unveiled. The difference was that these snapshots had been stealthily captured years earlier, inside Iran, hiking with friends or driving her car. In her posts, Alinejad called for other women to take similar pictures.

From Poland’s “Black Monday” strike to women shedding the compulsory hijab on social media, there is power in sisterhood and solidarity.

One Woman Stands Against the Iranian Government

It's a civil rights movement, not a revolution.

She was soon deluged with images, and a campaign was born. Alinejad called it My Stealthy Freedom. Today, My Stealthy Freedom’s Facebook page has more than a million followers, and Alinejad’s personal Instagram account boasts similar numbers. Posts have been accompanied by a changing array of hashtags, the most popular of which has been #WhiteWednesdays, which began last year as a call for women to send pictures or videos of themselves holding up or waving a white veil in public on that day of the week. These days, the videos flood in constantly.

Protest is not foreign to Iran. At the end of 2017, there was unrest across the country, entirely separate from the issue of the hijab. Iranians took to the streets to oppose falling living standards and their government’s costly spending on foreign conflicts. It was the biggest display of dissent in the country since the Green Movement in 2009. Security forces killed some 20 people and arrested thousands more during the latest protests before the government managed to restore some order in January. The unrest nevertheless continued to simmer, with violent clashes in May in the southwestern city of Kazeroon.

But the campaign against the mandatory hijab proved harder to contain. Small individual acts of defiance against the headscarf are amplified on social media. While it’s hard to gauge exactly how many people participate or support it, the campaign appears to have wide appeal. The women sending their videos to Alinejad come from all parts of Iran, from cities and villages, elite and lower class. They film in classrooms, on the beach, and on the street. A number of the short videos are shot by husbands or brothers who film the women walking in front of them unveiled, their back to the camera to protect their identity. Many women now film their altercations with the morality police, interactions that have spawned a new hashtag: #MyCameraIsMyWeapon.

Alinejad says American liberals, in their efforts to be culturally sensitive, sometimes dismiss her campaign. “Before the revolution, we had the right to choose what we wanted to wear in Iran,” she said at a June event hosted by TheWrap news website in Washington. “Compulsion was never part of Iranian culture.” She sees her efforts as focused on a fundamental freedom that all Iranian women, religious or not, should be entitled to: the ability to decide for themselves whether or not to wear the hijab. Other Iranians appear to agree. In February, President Hassan Rouhani revealed that his office had conducted a poll on the issue in 2014, which showed that 49 percent of respondents opposed the mandatory hijab.

Those divisions are not new. On International Women’s Day in March 1979, just a month into the Iranian revolution, as many as 100,000 women, according to some estimates, took to the streets of Iran to oppose Ayatollah Ruhollah Khomeini’s then-fresh edict imposing the veil. Photographs and video of that march clearly show that unveiled women weren’t the only ones who protested, chanting, “In the dawn of freedom, there is an absence of freedom.” Women wearing veils and chadors also joined the rallies, as did many men, including dozens who formed a protective cordon around the female protesters to shield them from attacks by Khomeini supporters.

Those protests lasted a week but fizzled out under the threat of more violence. Alinejad hopes that her activism can evade the same fate. “We are not fighting against a piece of cloth,” she said. The fight, Alinejad added, “has become about our identity as Iranians, our freedom of choice and expression.”

Kim Ghattas is a BBC correspondent covering international affairs and a senior visiting fellow at the Carnegie Endowment for International Peace. She is the author of "The Secretary: A Journey With Hillary Clinton From Beirut to the Heart of American Power." Twitter: @BBCKimGhattas
Tags: Human Rights, Iran, Women’s Rights