The Chinese telecommunications firm is connected to other companies with a history of proliferation.

The Chinese telecommunications firm ZTE has had U.S. sanctions against it lifted thanks, in part, to the efforts of President Donald Trump. The U.S. Congress, which opposed the new deal, has focused on ZTE’s breach of its original agreement to settle charges that it sold American goods to Iran. But what ZTE actually represents is a small part of something much larger: a pattern of breaking sanctions and illicit deals by firms with strong ties to the Chinese military-industrial complex.

It’s hard to judge whether such actions are deliberately coordinated or whether they just represent a natural tendency to dodge the rules by firms used to the loopholes and under-the-table deals of Chinese business. Beijing has a long history of supporting Iran and North Korea in a variety of ways, including nuclear assistance and by looking the other way on dollar counterfeiting. Either way, the rule breaking by Chinese military-linked firms is consistent. That makes it all the stranger that Trump is going out of his way to try to protect their interests.

ZTE itself is a good example of how the reach of the People’s Liberation Army (PLA) and the broader Chinese military-industrial complex extends well beyond their military focus. The PLA itself has business interests stretching from hospitals to bathroom tiles exported around the world. ZTE itself is part-owned by two firms with extremely close PLA ties. Follow the money and the connections become apparent.

The largest individual owner, with a 30 percent stake of ZTE, is split among four companies, including Xi’an Microelectronics Technology Research Institute and Shenzhen Aerospace Guangyu, which control the board of the holding group. Follow the corresponding beneficial shareholders upward and you discover that Xi’an Microelectronics is owned by China Aerospace Science and Technology Corp. (CASC), and Shenzhen Aerospace is owned by the China Aerospace Science and Industry Corp. (CASIC).

The similarity in names is not an accident. CASC and CASIC were at one time the same entity before being separated into their current units in 1999. CASC and CASIC are directly owned by the State Council’s powerful State-owned Assets Supervision and Administration Commission but report to the PLA and are involved in the defense industry, including the development of military satellites and precision-guided weapons. According to U.S. congressional testimony, PLA offices are embedded “within CASC and CASIC design departments, research institutes, and factories.”

Step back and the role of other Chinese firms in proliferation becomes clear. CASC’s other holdings have actively facilitated weapons proliferation to rogue regimes around the world and have regularly violated U.S. sanctions. One company under CASC (as shown in the organization chart here) is China Great Wall Industry Corp. (CGWIC), active in a wide variety of sectors. CGWIC has a history of proliferation activities with Iran dating back to the first George W. Bush administration and has been sanctioned for it repeatedly. Daniel Pinkston, a nonproliferation expert, testified in 2005 that CGWIC proliferation activities helped Iran improve its missile program. 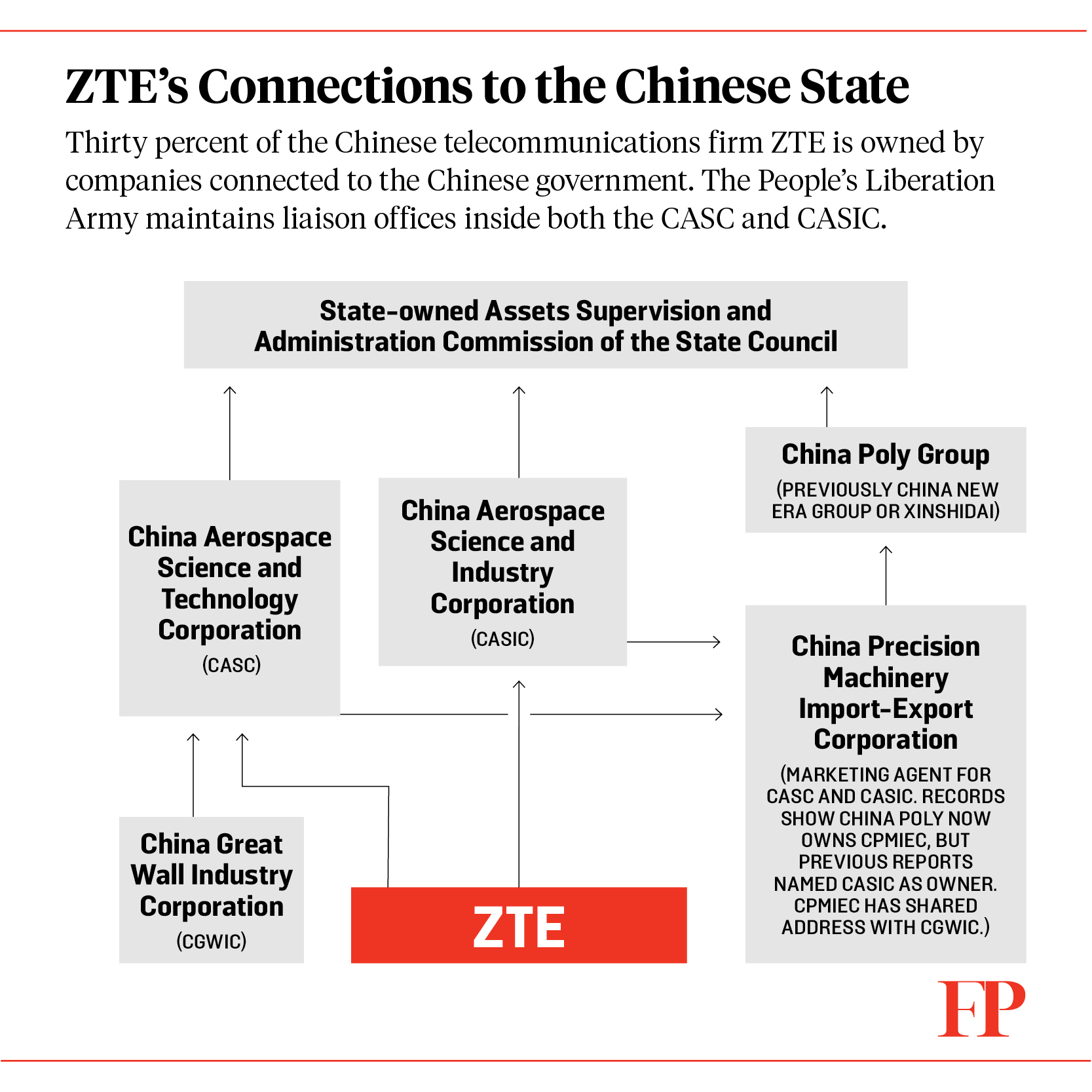 Another firm involved in past proliferation is the China Precision Machinery Import-Export Corp. (CPMIEC), owned by the China Poly Group, another state-owned enterprise. CPMIEC, which may previously have been owned by CASIC, is a marketing and sales arm for many Chinese arms manufacturers. Its sales of high-grade weaponry to Iran and Pakistan have earned it sanctions from the U.S. Treasury Department on multiple occasions.

There’s evidence that these firms sometimes work closely together and they go out of their way to avoid sanctions. At times, CGWIC and CPMIEC have shared the same address in Beijing. CPMIEC repeatedly sought to avoid sanctions by shipping to the United States under front companies. The Chinese government was made aware of their activities by Washington’s repeated sanctions but did nothing to halt them.

Nor are these incidents in the distant past. In 2013, missiles bound for Iran were seized in the Persian Gulf from CPMIEC. In 2011, CPMIEC was found to have offered to sell missiles to Libyan leader Muammar al-Qaddafi, complete with a shipment smuggling plan contravening a United Nations embargo. Though it remains unclear whether the arms were sold or received, it is clear that Beijing was actively seeking to avoid sanctions. This ongoing list prompted the United States to level additional sanctions on CPMIEC after the company was found to have shipped weapons to North Korea, Syria, and Libya.

The known violations by CGWIC and CPMIEC took place in the same time frame as ZTE violations. The CGWIC and CPMIEC sanctions were imposed for violations committed between 1991 to 2013 with steady regularity. ZTE’s sales of prohibited products follow a very similar pattern.

Today, on a business-to-business e-commerce platform managed by the China Chamber of Commerce for Import and Export of Machinery and Electronic Products, CPMIEC maintains an active store. With a variety of surface-to-air and portable air missile defense systems (click “Add to My Favorites!”), CPMIEC offers buyers the chance to inquire about the latest in Chinese-branded military weaponry — complete with FOB pricing. Chinese arms from this family of firms continue to turn up on battlefields across the world, including in areas supposedly under sanction, where these firms are suspected of providing weaponry for chemical weapons attacks.

The new deal allows ZTE to purchase U.S. products. But this decision willfully ignores the long history of deliberate violations that ZTE and other firms with military links in China have committed. There’s no reason to give ZTE, or its partners, the benefit of the doubt.