The International Army Games Are Decadent and Depraved

What attending a tank biathlon outside of Moscow taught me about contemporary Russia.

The familiar roar of the crowd on the bleachers as the home team surges to take the lead. The excited, inciting yammer of the commentator. The big screens showing details and stats. Just another sporting event. Only this time, the team comprises three Russian soldiers crewing a T-72B3 in the finals of the tank biathlon against rivals from China, Kazakhstan, and Belarus.

Russia’s successful blending of sport, warfare, soft power, and spectacle is a high-octane form of public entertainment. But it’s also much more than that. It opens an important window into how the Kremlin sees its military force as its Swiss army knife, a tool for all occasions.

I was fortunate enough to be standing in the press gallery during the finals at the Russian army testing and training grounds at Alabino, courtesy of HBO Sports. Part of the wider International Army Games, which also include the Falcon Hunt drone competition and the True Friend dog team contest, the tank biathlon is nonetheless the showcase event. The finals were attended by Russian Defense Minister Sergei Shoigu—the event’s patron and sponsor—and an array of military attaches, visiting generals, and representatives of the countries taking part. There were even rumors that President Vladimir Putin himself would attend.

The first tank biathlon was held in 2013, with just four teams taking part (Armenia, Belarus, Kazakhstan, and Russia), but the International Army Games proper began in 2015, in the aftermath of the post-Crimean chill. Since then, they have grown from 14 separate events involving teams from 17 countries to 28 and 32, respectively. While most of those attending could be considered usual suspects—BRICS partners such as China and India, Russian allies or customers such as Serbia and Venezuela—this year, Israel sent teams to compete in three events (the military rally, field medicine, and a field cook-off), and NATO member Greece even joined a single event.

Although the Army Games are an annual fixture conducted not just at Alabino but in other Russian cities and beyond, including in Azerbaijan, Armenia, Belarus, China, Iran, and Kazakhstan, it’s Moscow that bears primary responsibility for organizing, and paying for, the events. That raises the question of motive. At a time when the Kremlin is spending money openly to fight a war in Syria and covertly to maintain another in Ukraine—and when it is thrusting unpopular pension reform down a recalcitrant population’s throat at home—why spend an undisclosed but substantial sum on a martial jamboree? 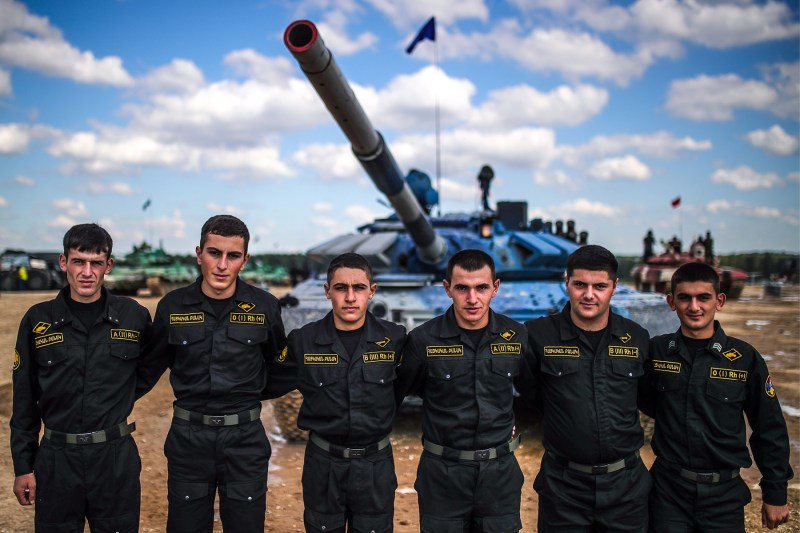 GALLERY | A Russian Spectacle of Warfare as Sport: The International Army Games meld battlefield and playing field in a show of might and regional diplomacy. Click here for more images from The Games.

In part, it’s because the games are also an arms fair. In the smoking area, Serbian green camo stands alongside Chinese blue, and a Russian tank driver begs a light off a Nigerian. But the most important gatherings aren’t so unplanned and democratic, as the Russian hosts fete, schmooze, wine, and dine their guests. Some of this is about arms sales. Right after the 2015 games, in which Nicaragua’s team crewed Russian-provided T-72 tanks, for example, Nicaragua opened negotiations that saw it agree to buy 50 for $80 million.

There are also broader diplomatic goals at stake. As in the recent soccer World Cup, the Russians want to win, but at least as important is proving that, contrary to the West’s best attempts, they are not internationally isolated. To that end, Russia tries to include as many countries as possible in the events and ensure that everyone in attendance feels the competition is fair (even if Russians almost always win). Regular Russian sports may be mired in doping scandals, but there has been no hint of similar foul play at recent iterations of the Army Games—at least by the Russians: The Chinese came close to disqualification during the Aviadarts bombing contest under suspicion of adding some modifications to the requisite iron bomb. Whereas in past years competitors that fail to bring their own tanks might get stuck with more a dated Russian one, this time anyone who wanted had the same T-72B3s, although the Chinese made a point of bringing their own Type 96, and Belarus fielded its own version of the T-72.

Russia has also made a point of inviting countries at odds with each other—Armenia and Azerbaijan, India and Pakistan, Israel and Iran, and so on—to present itself as an independent international arbiter. Of course, the Army Games have hosted far more arms deals than peace deals—but as one Western diplomat told me, “Just getting all these teams here is a win.”

If the Army Games are an exercise in diplomacy, however, their major audience is domestic. Above all, they are a public relations opportunity at home for the Russian military. The event is an unashamed celebration of military life, values, and hardware. Alabino is transformed into a military theme park for the entire family, as parents take proud photos of 7-year-olds holding AK-74s almost as tall as they are, girls chase each other around the latest self-propelled howitzers, and courting couples sport his-and-hers camouflage T-shirts and pilotka military caps. There are booths from the Voentorg military store selling souvenirs and branded bottles of water, laser tag tourneys for the kids, and olive drab mess tents for a bit of lunch.

And, of course, mobile recruitment stations are ubiquitous, in case anyone is carried away by the romance of an army life. The Russian Armed Forces are certainly eager to hire more volunteer kontraktniki, not least as new-generation systems like the fabled (and expensive) T-14 Armata tank challenge the skills of conscripts on mere 12-month tours. (Talk to Russian officers and they’ll say that after the draftees have done their basic training and their unit training, and before their last month, in which they’re excited to demobilize, they are only really operationally effective for about three months of that 12.)

The ultimate public purpose of the games is to normalize the military as a part of Russian society, to project for Russians a macho perspective on their country’s place in the world, and subliminally to support one of the central elements of Putin’s legitimating narrative. At a time when the switch to all-volunteer forces in the West has contributed to the emergence of a multi-generational “warrior caste,” there has been a conscious decision in Russia to embed the military more deeply into wider society. These efforts include the DOSAAF after-school programs offering young men and women the chance to learn to parachute jump or strip a Kalashnikov, the offerings of the military’s Zvezda TV channel, and the self-conscious remembrance of the “Great Patriotic War” (World War II) that targets the whole family.

The Army Games aren’t simply an aid to recruitment; they’re part of a deliberate effort by Putin’s regime to intensify the connection between army and society. The Kremlin increasingly relies on this connection for its own legitimacy. Economic sanctions (and economic priorities such as buying off cronies and subsidizing Crimea and Chechnya) have deprived Putin of his capacity to buy off the Russian population with a steadily improving quality of life. In its place, he relies on appeals to a loamy Russian patriotism and its twisted twin, a xenophobic worldview that presents the outside world as a dangerous, hostile place. This worldview demands that Russia push back and that it have an experienced and forceful protector in the Kremlin. One like, say, Putin.

This public relations effort is essentially defensive and born of insecurity. There is little evidence that Russia has serious territorial ambitions beyond Crimea—even the Donbass was really just seen as leverage on Kiev. Nor are ordinary Russians at all eager to see their boys coming home as “Cargo 200” casualties of war. Syria is not an especially popular campaign, even though Russians have been sold on it as an essentially bloodless techno-war. Moscow’s continued refusal to acknowledge its combat operations in the Donbass are less to convince the West—that bird has long since flown—but to avoid alarming its own population.

The Kremlin wants Russians to see their military as at once a reassuring guarantor of Russian security, sovereignty, and status, and also evidence that the country is up off its knees. The tank biathlon, in all its dusty and deafening theatrics, is a perfect symbol of this: The military might deployed not for war but to prove that Putin has indeed made Russia great again. And it doesn’t hurt that Russia wins every time. A cynic would suspect that their teams spend all year training for this very event, much like those Soviet Olympic “amateurs” back in the day. After all, it would be pretty stupid to spend all that money and not win—and the Russians aren’t that kind of stupid.

Mark Galeotti is a senior associate fellow at the Royal United Services Institute in London and an honorary professor at the University College London School of Slavonic and East European Studies. Twitter: @MarkGaleotti

Does Russia get too much or too little credit in fueling the Ukraine scandal? As with everything these days, it’s too hard to tell.

For Russia, Impeachment Can’t Be Over Soon Enough

Despite the shadow cast by election interference, many leading Russians—even Putin—would like to get back to normal dealings.

A New Scottish Independence Vote Seems All but Inevitable

India’s Muslims Are Fighting for Their Religion. Should They Display It, Too?