Don’t Buy the Panic About the Rupee’s Fall

Since January, the Indian rupee has tumbled more than 9 percent, hitting a new all-time low of about 70 to the dollar in mid-August. The fall has caused much hand-wringing in the media and in policy circles, where observers lament the currency’s status as Asia’s worst performing, charge Prime Minister Narendra Modi with economic mismanagement, and fret about India’s ability to pay its debts. Calls for the government to do something—anything—to stop the rupee’s slide abound.

But should India’s central bank, which has responsibility for managing the exchange rate, reverse the fall? My short answer is: no. The central bank has done an excellent job to date, and it should stay its course. Further, the weakening of the rupee will actually be a good thing for India.

Exchange rates represent the value of a foreign currency relative to a domestic one, and their basic purpose is to set the prices of domestic goods compared to their foreign analogues. In the simplest terms, a fall in the rupee against the dollar will make imports into India more expensive in rupees. Exports from India will be less expensive in dollars to foreigners. More expensive imports will push India to substitute domestic production for foreign goods, and cheaper exports will help India expand its sales of goods abroad.

If India were exporting more than it imports, such a rebalance might be a bad thing. But India has lately been running a huge trade deficit ($16.6 billion as of June, the highest figure in five years). A falling exchange rate may help chip away at that imbalance. Conversely, attempts to raise the value of the rupee could dig that hole deeper and cause other problems as well: Large trade deficits must be partially financed through borrowing abroad, which only increases the country’s foreign debt.

High inflation can make domestic tradable goods and services less competitive than those from its trading partners. For example, suppose that India’s inflation rate is 4 percent and the United States’ is 2 percent. In that case, the price in rupees of goods and services would rise 4 percent on average in India, while the prices in dollars would rise 2 percent on average in the United States. If the rupee-dollar exchange rate were unchanged, this would mean that in dollar terms, Indian goods would become 2 percent more expensive than U.S. ones. Over time, that would add up, translating into increased imports into and reduced exports out of India. 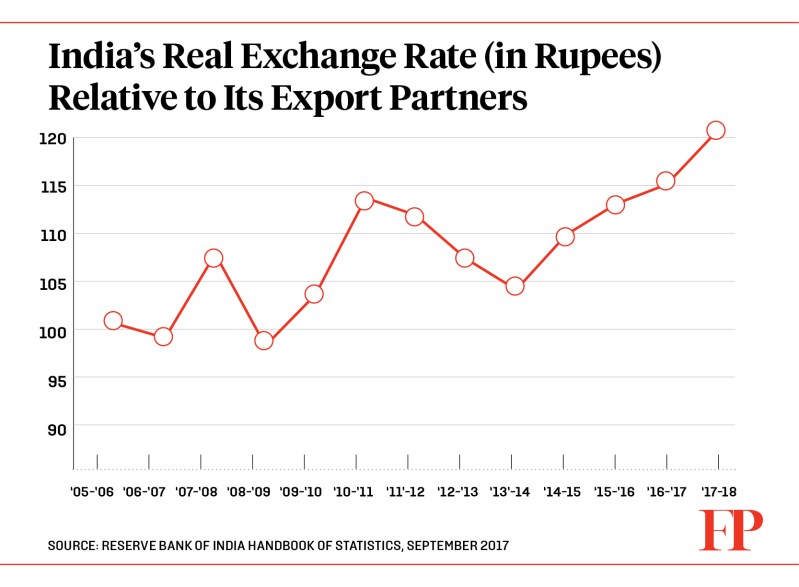 A calculation of India’s real exchange rate relative to its export partners shows that the rupee had been appreciating between about 2014 and early 2018, which means its exports were becoming less competitive. This followed a large depreciation after the global financial crisis, a slight recovery, and then another large depreciation again after the U.S. Federal Reserve Board announced its intentions to raise interest rates in 2013 (the “taper tantrum”). Between fiscal years 2013-2014 and 2017-2018, the rupee had appreciated by 15.6 percent in real terms. Not surprisingly, India’s trade deficits—in both merchandise and services—have been large and growing; imports have exceeded exports by wide margins.

This has had worrying side effects for the economy. For one, to the extent that the vast majority of goods are traded and the vast majority of services are not, a rising real exchange rate creates a bias against producing goods and in favor of producing services. Witness the dominance of services in the Indian economy—they accounted for 61.4 percent of India’s GDP in 2016. The problem with the services industry is that it doesn’t create as many low-end but well-paying jobs as manufacturing does. Correcting the imbalance was one of the objectives of Modi’s “Make in India” campaign, which promoted the country’s manufactured goods industry.

Another problem is that a rising real exchange rate can spur domestic lobbyists to demand that the government implement tariffs. That makes sense: As the competitiveness of domestic products erodes, their producers naturally begin to clamor for protection. This dynamic may have been partially behind recent tariff hikes on a large number of products in India last year. But tariffs are not the answer to such problems, since they stay in place even after the real exchange rate starts to correct. Rather, the right response is to try to lower the nominal exchange rate, which would encourage the production of both exportable goods and goods that can compete with imports. And with this summer’s slide in the rupee, that is exactly what can be expected to happen.

It is thus worth taking with a grain of salt pronouncements that the rupee’s depreciation spells disaster. Those making such claims, particularly foreign investors in India, of course stand to lose if the economy rebalances. But Indian policymakers must consider what is really in India’s best interest.

Arvind Panagariya is a professor of economics and the Jagdish Bhagwati professor of Indian political economy at Columbia University.

Nobody jokes about the "Hindu rate of growth" anymore. But with hopes for further reform fading in New Delhi, will the Indian economic miracle come to an early end?

Asia is ready for India to step up as the United States withdraws.

India Is the Latest Front in Trump’s Endless Trade War

Modi’s soft approach is getting nowhere with a hard-line Washington.