Night at the Museum

Brussels’s new European history museum could put anyone to sleep.

Even before U.S. President Donald Trump landed in Brussels in mid-July to trash-talk NATO allies, it was clear that the European Union was in crisis. In Germany, a weakened Angela Merkel was forced to either tighten migration policy or lose her coalition (she chose the former); in Italy, Matteo Salvini, the leader of the ascendant right-wing Lega party, railed against his country remaining in the eurozone; Hungary and Poland were continuing their creep toward authoritarian rule; and Britain was struggling to figure out Brexit. The opening in May 2017 of a new museum in Brussels devoted to promoting Europe might have served to bolster the flagging union. Yet all it has managed to do is generate more controversy.

The House of European History, which was created by the European Parliament, was roundly criticized even before its doors opened for just about everything: The Platform of European Memory and Conscience, a multinational nongovernmental organization that raises awareness about totalitarianism in 20th-century Europe, said the museum was too soft on communism; Piotr Glinski, the Polish minister of culture and national heritage, accused it of presenting Poland, France, and Ukraine as “complicit in the Holocaust”; Ukrainian scholars complained that curators failed to use the term “Holodomor” for the Ukrainian famine; British tabloids slammed both its price tag, some $60 million, and the designers’ choice to highlight a Norwegian paper clip design but not the discovery of penicillin by a Scottish researcher. Branding it a “museum of dumbed-down ideology,” the Polish historian Andrzej Nowak said it was so boring that it appeared to put visiting schoolchildren to sleep.

I visited the museum in May to see whether such criticism had merit. I discovered that in its attempt to be, as its founding charter describes it, a “place in which the European idea comes alive,” the museum almost entirely ignores what actually breathes life into that idea: Europeans themselves. In its desperation to appear inclusive and sidestep historical controversies, the House of European History veers away from the individual stories and emotional urgency on which continued European unity depends.

Liveliness may have been sacrificed the moment the European Parliament chose a former dental institute to house the museum. The interior still had the sterile, institutional aesthetic of a place you would go for a painful but necessary procedure. The moment I cleared the metal detector, a staff member ushered me upstairs, where I was handed my very own tablet and earpiece. The museum has made much of its state-of-the-art teaching tool, which allows visitors to choose from among 24 languages in which to learn about Europe’s common identity. But the tablet’s complicated introduction to its own use—which ran a whopping three minutes and 32 seconds—seemed likely to only unify museumgoers in impatience.

I emerged from the sleek glass elevator to the strains of Beethoven’s Ninth Symphony, which has been adopted as the European anthem. The complicated tablet was now my only guide since, in the name of linguistic equality, there was barely any signage. One of the first sections of the permanent exhibition focused on the French Revolution. According to the tablet, after 1789, “some visionary Europeans hoped for the unity of the continent beyond national allegiances.” The curators’ ideological bent was clear: to emphasize the historical struggle between nationalism, with its militaristic and authoritarian impulses, and continental unity, which is peaceful and democratic.

The museum sets the wars of the 20th century neatly into this framework: It puts a heavy load of blame for World War I, for example, on Slavic nationalism. (For extra emphasis, the pistol used by the Serbian nationalist Gavrilo Princip to assassinate Archduke Franz Ferdinand of Austria is given a place of prominence in its own glass case.) The aggression of the great powers and their alliances are downplayed.

The museum’s handling of World War II has come under particular condemnation. British critics have complained that this section of the museum minimizes the role of Winston Churchill and other Brits and that the U.S. role in the war is hardly mentioned. But since Anglo-Americans so often take credit for winning the war while disregarding the immense suffering and sacrifice that took place in occupied countries and on the Eastern Front, this twist seemed refreshing. Polish critics for their part have claimed that Germans are presented “without indicating their role as aggressors and perpetrators.” This charge seemed unfounded; carefully placed footage of Nazi propaganda rallies left no illusions about fault. But the museum does present World War II as a battle between two authoritarian regimes, Stalinism and Nazism, rather than as a German war of aggression.

Throughout the exhibit, the plights of victims were largely missing. The mishmash of objects in the cases offered only glimpses of human suffering—a pair of woven shoes caked with mud, a few Star of David patches—but there was nary a personality or individual narrative to engage with. Ideology, again and again, trumped humanism. While it’s tempting to interpret this oversight as German revisionism (especially since the museum was the brainchild of Hans-Gert Pöttering, a German politician), it seems more likely that the curators were simply keen to highlight the evils of nationalism and totalitarianism without riling Europeans up over who exactly did what to whom. Still, there’s something wrong when Adolf Hitler and Joseph Stalin come off as the most compelling characters in the room.

The postwar period, which continued on the next floor, offered the European version of the politics of personality in the form of a collection of busts of the EU’s founding fathers. But the museum’s failure to portray the human horrors of World War II made the founding of the European Union seem more like a convenient economic and diplomatic development rather than a radical attempt to avoid a repeat disaster for future generations. Below each bust appeared an object meant to bring the founding father to life. Yet it was hard to get excited about the wine jug that appreciative vintners gave to former Luxembourg Prime Minister Joseph Bech, an architect of European unity, in 1953. 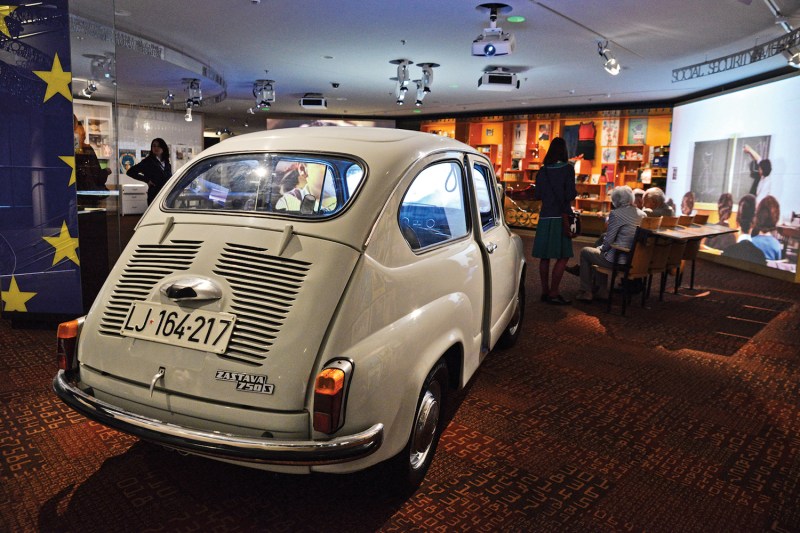 A Yugoslav Zastava 750, a supermini-turned-interactive exhibit at the House of European History. (Dominique Hommel/European Union 2018 – EP)

More compelling was the section devoted to the rise of Europe’s welfare state. When I reached this point, I had been following a group of young Germans who alternated between tapping their tablets and wandering around glassy-eyed, but they suddenly grew animated when they encountered the Zastava 750 parked in this exhibit.

The old Yugoslav supermini had been retrofitted as a one-car exhibit on European prosperity; you could even sit inside and watch color footage of the type of winding mountain road James Bond always seems to drive along (with a gorgeous continental woman). This exhibit was supposed to be one of the few interactive ones in the museum, but the tablet docking station that was presumably intended to unlock some new activity wasn’t working.

The fact that the designers gave a Yugoslav car the honor of demonstrating the great European vacation suggests that critics might have a point about the museum going soft on communism. But it’s also possible that naysayers never made it to the next floor, which detailed the democratic uprisings that led to the fall of communist regimes in Eastern Europe and the collapse of the Berlin Wall. By this point, I, too, was eager to reach contemporary Europe. This section included an exhibit on EU institutions that someone probably conceived of as interactive because it involved a wall studded with giant slide-out pegs displaying civics textbook-style explanations of what each of the institutions did. (A couple, fittingly, got stuck halfway and needed a good yank.)

But like the midcentury rooms before it, modern Europe was haphazard in its curation: It included a collection of EU license plates, a Rem Koolhaas installation involving 80,000 pages of EU law, and a short film on the European Union. Ever diplomatic, the film’s narrator noted some of the union’s challenges, with a glancing conversation of border policy and the 2008 debt crisis, but offered up immediate rejoinders to its own discussion: Who can worry about such concerns when enjoying the benefits of free-roaming mobile phone contracts, cheap flights, and inexpensive Polish plumbers? (The museum didn’t make this last point explicitly, but it did highlight the free movement of labor.) In the museum’s everything-but-the-kitchen-sink style, it even gave cursory acknowledgment to Brexit and the ongoing European refugee crisis.

The Fight Against European Populism Is Far From Over

If French President Emmanuel Macron is serious about pushing back against xenophobic populists, he needs to revamp his own legislative agenda.

Populism Is a Problem. Elitist Technocrats Aren’t the Solution.

The problem isn’t too much democracy — it’s too little.

By this time, I’d given up on my tablet out of sheer weariness, and I wasn’t the only one. For a museum whose stated purpose is, in the words of European Parliament President Antonio Tajani, to “become a place of debate,” forcing visitors to stare at a screen seems counterproductive. This problem must have occurred to someone else besides me because the sixth and final floor of the exhibition was mostly empty space devoted to eliciting visitors’ opinions. Museumgoers were encouraged to write their thoughts on European identity and values on a piece of paper and to tape their answers to a wall. This turned out to be the most effective and affecting part of the entire museum. The messages were far from united, in both language and sentiment, but they hinted at real lives shaped by Europe’s policies.

“I am a Syrian refugee, but I love Belgium,” read one in French.

“Europe is failing miserably with respect to immigration. … Greece and Italy have been bearing the grunt [sic] of it and its [sic] leading to dangerous sentiment,” read another in English.

The House of European History was most engaging when it allowed individual voices to define Europe and its many tensions of identity, instead of using technology and pedagogy to blend away difference in the interest of uncomplicated unity. But I understood the challenge that proponents of the European Union are facing. Nativism and nationalism pack emotional power that trans-European unity can hardly compete with, even in the face of socio-economic self-interest.

But of course, part of the problem with the House of European History is that what truly unites 21st-century Europeans isn’t particularly sexy or even all that dramatic; it’s a firm belief in a social security net, in a good work-life balance, in regular vacations in your plucky little car. It’s not the politics of personality but the dry wheels of bureaucracy that make a secure life, free from the violence and horror of war, possible. The European Parliament might have done better investing the $60 million in a restaurant like Kokuban, which sits across the street from the museum on Jean Rey Square. There, on a warm May afternoon, was a more compelling display of European unity than any of the exhibits on the other side of the road. People sat chatting in more than a dozen languages, eating Japanese food, and, because it’s still Europe after all, smoking—all in companionable peace.

This article originally appeared in the Fall 2018 issue of  Foreign Policy magazine.

Katherine Marsh, a former resident of Brussels, is the author of Nowhere Boy, a children’s novel set in Europe during the refugee crisis. Twitter: @MarshKatherine

The Fight Against European Populism Is Far From Over

If French President Emmanuel Macron is serious about pushing back against xenophobic populists, he needs to revamp his own legislative agenda.

Populism Is a Problem. Elitist Technocrats Aren’t the Solution.

The problem isn’t too much democracy — it’s too little.