When Dwight D. Eisenhower took the oath of office as the 34th president of the United States in 1953, the total U.S. nuclear stockpile was approaching 1,000. When Ike left, eight years later, that number had grown to around 20,000—with further increases programmed in. Those weapons included one of the strangest creations of the Cold War: an atomic bazooka, putting nuclear destruction in the hands of as few as two soldiers.

For the U.S. military planners of the 1950s, nuclear weapons were not merely strategic assets to deter conflict but munitions ready for use in the event of hostilities. Eisenhower looked to nuclear weapons as a cheaper alternative to conventional troops at a time when U.S. forces were dangerously, and expensively, overstretched.

Soon after taking office, for example, the Eisenhower administration decided it would use nuclear weapons in Korea if armistice negotiations broke down. Officials announced in 1954 that the United States might respond to conventional aggression anywhere with massive nuclear retaliation. The Eisenhower administration even attempted, in 1957, to reorganize the U.S. Army to better survive on a nuclear battlefield.

Eisenhower put it plainly in his memoirs: “My feeling was then, and still remains, that it would be impossible for the United States to maintain the military commitments which it now sustains around the world (without turning into a garrison state) did we not possess atomic weapons and the will to use them when necessary.”

This emphasis on practical nuclear warfighting gave birth to the Davy Crockett—a tripod-mounted recoilless gun for firing a nuclear projectile over a distance of a few miles. It was the Army’s first portable nuclear weapons system.

Although the Army had already deployed nuclear artillery systems, by the late 1950s U.S. generals wanted a battlefield system that combat units could use against Soviet troops at close range. The initial Davy Crockett—named after the 19th-century pioneer and subject of a hit Disney miniseries in 1954—could be hand-carried and fired from its tripod by two or three soldiers. Another version could be mounted on a jeep or an armored personnel carrier and fired by two people.

The warhead for the Davy Crockett, the W54, measured 11 inches in diameter. (One piece of nuclear artillery used an even smaller shell, just 6 inches.) Since the Davy Crockett was meant for close-range use, the explosive power of the warhead was limited to 20 tons and 10 tons on a low setting—a fraction of the explosive power of the Hiroshima and Nagasaki devices but enough for the blast to kill advancing Soviet or Chinese troops.

Giving Gomer Pyle a nuclear bazooka seems absurd today but only thanks to our modern sensibilities about the horror of nuclear war. At the time, West Germany’s defense minister, Franz Josef Strauss, wanted to equip his own country’s forces with the Davy Crockett. And this idea pales compared with other strange ideas from the period, such as nuking the moon to see what would happen—as proposed in the U.S. Air Force’s Project A119. 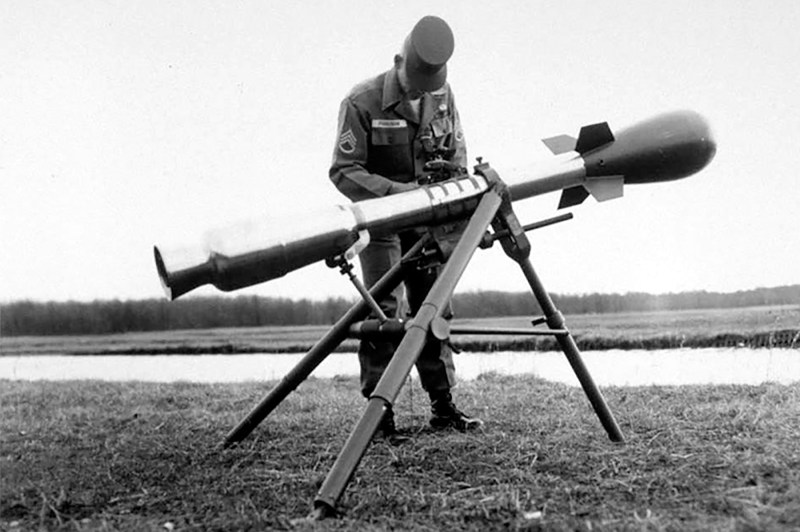 Over time, of course, the collective view of nuclear warfare changed. John F. Kennedy and Nikita Khrushchev stood eyeball to eyeball over Cuba, terrifying the world. The notion that nuclear weapons were like any other munition has become as dated as the tail fins on a 1957 Chevrolet.

Ike’s vision of an affordable nuclear boost on the battlefield sat uncomfortably with most people—particularly those being defended by battlefield nuclear weapons. Many of them, particularly in Europe, began to feel strongly that the nuclear weapons put there to defend them were, in fact, as great a threat as the Soviet Union. Hence, the oft-repeated observation that the United States was willing to defend NATO down “to the last German,” which wryly captured the growing sense that a nuclear defense was no defense at all. In the late 1960s, the Army began to remove the Davy Crockett from service. Tests in the Nevada desert had revealed that the weapons system was just too inaccurate to be useful on a battlefield.

Even so, smaller nuclear weapons remained part of the U.S. arsenal. The W54 design lived on through the 1980s as a backpack-sized nuclear landmine, ready to blow bridges and collapse mountain paths to stop invading Soviet forces. When Colin Powell, then-chairman of the U.S. Joint Chiefs of Staff, floated the idea of retiring tactical nuclear weapons in 1991, all four service chiefs opposed him, as did Defense Secretary Dick Cheney. Powell thought the weapons were “trouble-prone, expensive to modernize, and irrelevant in the present world of highly accurate conventional weapons.” Months later, after the August 1991 coup attempt against Mikhail Gorbachev and the looming collapse of the Soviet Union, President George H.W. Bush decided to largely—but not entirely—eliminate the U.S. stockpile of tactical nuclear weapons.

Today, tactical nuclear weapons are back in the news in the United States. President Donald Trump’s Nuclear Posture Review has called for the development of two new nuclear systems with a battlefield role. Trump—a throwback to the 1950s in so many ways and who probably watched the Davy Crockett miniseries as a kid—has expressed the same enthusiasm as Eisenhower did about expanding the number and type of nuclear weapons. “We must modernize and rebuild our nuclear arsenal, hopefully never having to use it,” Trump said during his 2018 State of the Union address, “but making it so strong and so powerful that it will deter any acts of aggression.”

Nobody tell him about the nuclear bazooka.

This article originally appeared in the Fall 2018 issue of Foreign Policy magazine.