With the Arctic melting and northern coast guards struggling to keep up, the next disaster is a matter of when, not if.

Kyrre Einarsen peered over the ship’s bridge into the gray waters of an Arctic fjord. Flanking the vessel were the jagged, treeless peaks that define the islands of Svalbard, a Norwegian archipelago deep in the Arctic Circle. Ahead of his ship was the vast and empty Greenland Sea. All that was missing was the ice.

Einarsen, a lieutenant commander with the Norwegian Coast Guard, and his small crew were on a three-week patrol around the region, nearly 600 miles north of mainland Norway’s northernmost tip. It was May. Even five or six years ago, Einarsen said, the fjords around Svalbard were iced over at that time of year. “You couldn’t go into this fjord without icebreaking capacity,” he said. This May, there wasn’t a chunk of ice to be seen, even as levels of snowfall rose. “That is not normal in an Arctic condition,” he said in a thick Norwegian accent.

“You don’t see the differences from year to year. But 2013 … was the first time that we really started to ask questions about what is going on.”

“You don’t see the differences from year to year,” said Thomas Nilsen, the editor of the Barents Observer, an independent news outlet based in Kirkenes, a remote Norwegian town that’s near the northernmost tip of the European continent. “But 2013 … was the first time that we really started to ask questions about what is going on.”

Nilsen, who has lived in Kirkenes for 15 years, said the changes are getting more dramatic, from melting sea ice to warmer, wetter weather. In July, the Barents region of northwestern Russia and northern Norway, Finland, and Sweden also experienced a wave of wildfires amid an unprecedented heat wave.

Beyond the coast, Einarsen patrols the seas around Svalbard on a three-week rotation from his Norwegian Coast Guard ship, the Harstad. Despite the warming temperatures, this stretch of ocean is still one of the most unforgiving and remote waterways on Earth. The Harstad is one of only 13 ships in the Norwegian Coast Guard, all charged with patrolling and securing the country’s territorial waters, an expanse equal to seven times the landmass of Norway itself and roughly equivalent in size to the Mediterranean Sea. During its tour, the Harstad is the first line of defense for any oil spills, at-sea accidents, or search and rescue operations around Svalbard. It’s also the last: Given the remote location, the Harstad is the only Norwegian Coast Guard vessel for hundreds of miles around.

The coast guard’s mandate used to be less daunting. The harsh Arctic environment long meant only the hardiest fishermen and bravest explorers dared to steer a boat this far north. But in recent years, the top of the world has seen a massive boom in human activity as the Arctic has warmed. Sea ice that once blocked almost all navigation is rapidly melting year after year. As the ice recedes, it is being replaced by oil tankers, maritime traders, cruise ships, and fishermen—some of whom aren’t operating Arctic-worthy vessels. The world’s northernmost coast guards now need to patrol huge swaths of water they rarely worried about before, and they are scrambling to keep up with demand. The Norwegian Coast Guard has only 350 people in its force. Even larger and better-resourced coast guards are straining to cope with Arctic operations. The 88,000-strong U.S. Coast Guard is looking to build a fleet of six icebreakers in the next decade. Right now, it has only one active icebreaker in the Arctic region, and that one is more than 40 years old and requires constant maintenance. 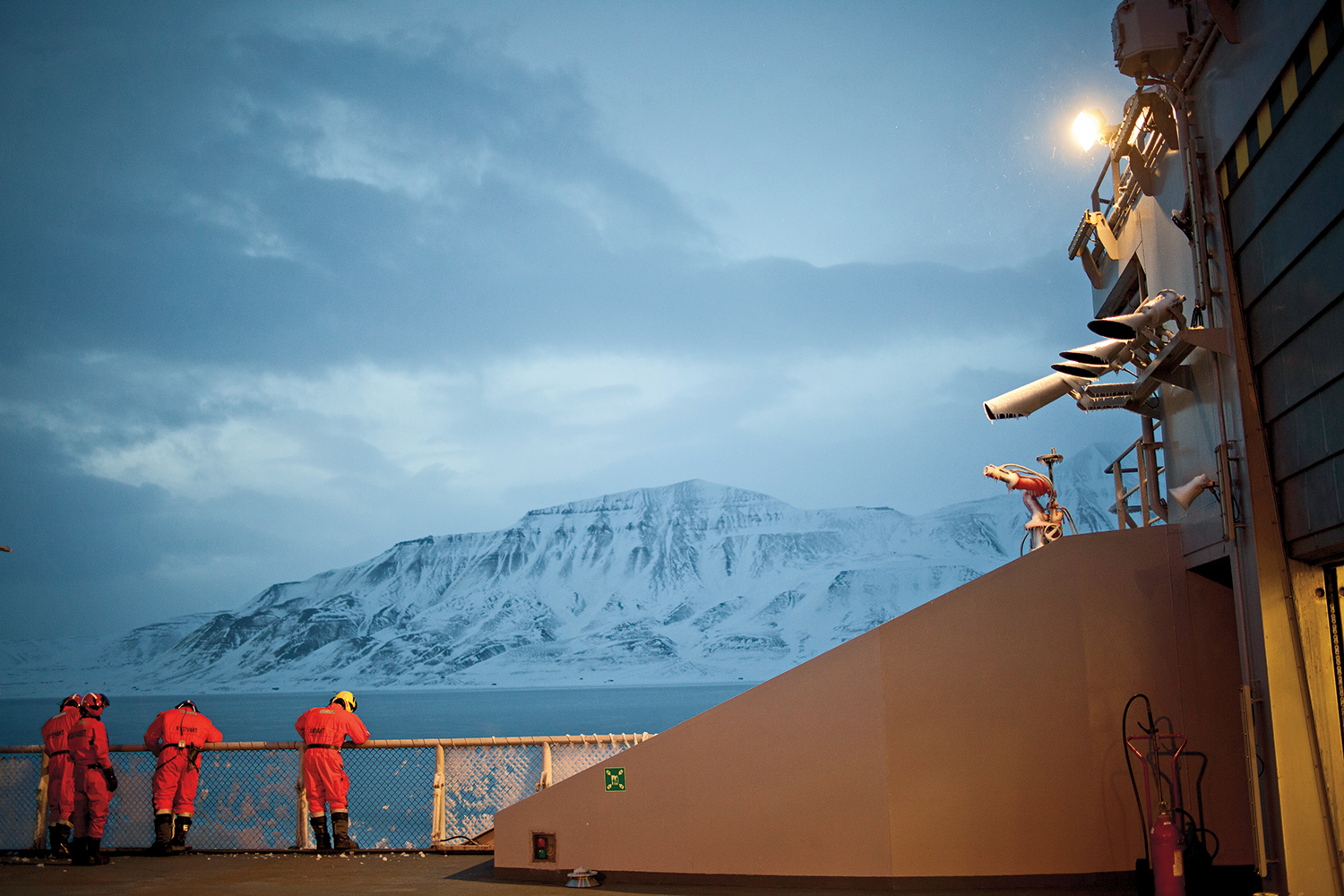 Norwegian Coast Guard officers aboard the Svalbard off the coast of Norway’s Svalbard archipelago in August 2011. (Nick Cobbing)

Senior coast guard officials across littoral Arctic states worry that the next big maritime disaster is a matter of when, not if. That terrifies even the hardiest of sailors. Search and rescue operations are always tricky, but in the Arctic, where the difference between life and death after taking a plunge in icy waters can be counted in minutes, they are exponentially more harrowing.

And rescue operations may become more common in the future. Thanks in part to the melting of the sea, between 2000 and 2016 the number of visitors to Norway from cruise ships shot up from 200,000 to 700,000. Einarsen noted that tourist traffic on ships near Svalbard alone has increased tenfold in recent years, from small daily trips launched from Longyearbyen, the largest town on Svalbard, to cruise ships venturing up from the south. According to the Association of Arctic Expedition Cruise Operators (AECO), a self-regulating international association concerned with the environmental and safety habits of its members operating in the north, 26 new polar cruise ships are set to launch in the next three years, and the number of passengers on AECO-affiliated ships is expected to increase by nearly 45 percent in three years, from 26,296 passengers in 2017 to 38,000 passengers in 2020.

China’s Ready to Cash In on a Melting Arctic

Beijing has big plans for its own Polar Silk Road.

The Head of the U.S. Coast Guard Isn’t Afraid to Talk About Climate Change

It may not be a White House priority. But rising sea levels are critical to the service’s operations.

As the warming region opens to new commercial and geopolitical interests.

The Norwegian Coast Guard struggles to keep up with it all, particularly when it comes to combating illegal fishing. “We have to prioritize,” Einarsen said. “We have to say: ‘We won’t do that for you today. Maybe we can do it next week.’”

Einarsen isn’t the only one who’s worried. Coast guards across the north have begun frantically pushing their governments for more resources, more ships, and more training missions in the Arctic.

It helps that all of the countries in the region face the same problems—even the United States, which patrols the waters around Alaska. “There’s an ocean where there used to be ice,” said Adm. Charles Ray, the vice commandant of the U.S. Coast Guard and its senior-most expert on the Arctic after nearly four decades of service. “Human activity has therefore increased.”

Ray described the challenges the world’s largest and most advanced coast guard faces when protecting Alaska’s northernmost territory—known as the North Slope—where oil sits under permafrost and intrepid tourist companies and explorers alike eye their next adventures. Even in the summer months, the weather can complicate operations. “What would be called a hurricane in the lower 48 is called ‘Tuesday’ in Alaska,” he said. 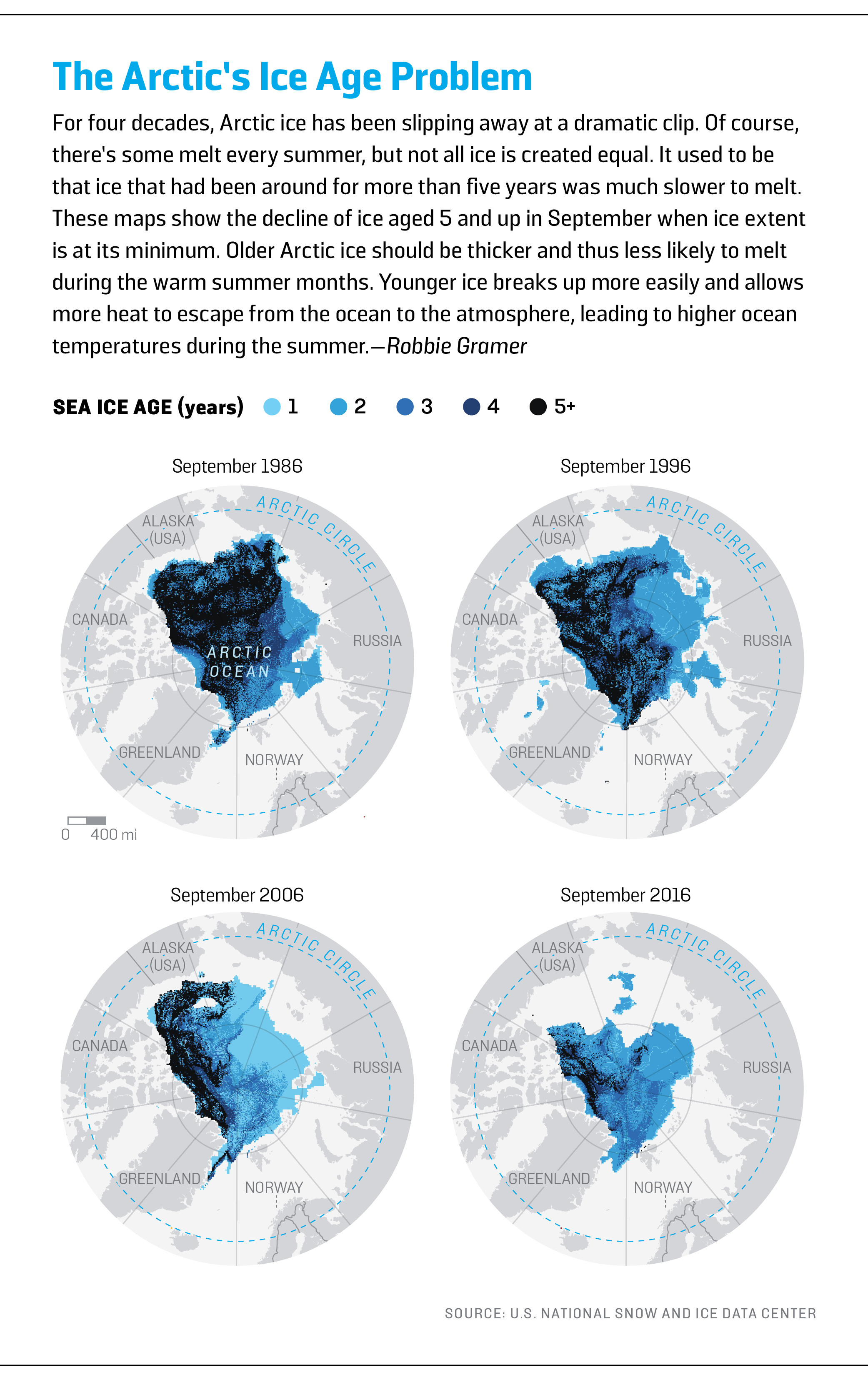 The distances also make missions incredibly complicated. “The closest Coast Guard station to the area of the North Slope is Kodiak, Alaska,” Ray explained. “As the crow flies, that’s 800 miles away … over 10,000-foot mountain ranges. As the helicopter flies, it’s more like 1,300 miles. As the ship sails, it’s more like 1,500 miles.”

Ray said the number of search and rescue operations in the Arctic region has gone up 200 percent in recent years, though it is still manageable. “We’re not talking thousands. We’re talking dozens of cases,” he said.

Asked if they were prepared to avert the next Titanic or respond to the next Exxon Valdez oil spill, both Norwegian and U.S. officials offered similar answers: They’re under-resourced, understaffed, and doing the best they can. “What we do,” said Ray, “is manage risk.”

That risk is growing. In 2016 and 2017, the Crystal Serenity, a luxury cruise ship, sailed from Alaska to New York through the treacherous Northwest Passage above Canada. The trip was advertised with much fanfare as the first, and most intimate, monthlong voyage to pass through this once iced-over route. The problem was that the Crystal Serenity was the same type of vessel that sails out of Miami, Ray said, with no hardened hull or other features that could help prevent catastrophe if it hit an iceberg.

According to Ray, the Crystal Serenity did a great job communicating its route and taking extensive safety precautions—including sailing with an escort ship—during its Arctic crossing. But some native Alaskan communities and environmental activist groups, such as Friends of the Earth, criticized the ship’s plan, citing the potential environmental impact of releasing human waste and fuel into the oceans, while others highlighted the astronomical cost that would have been borne by the Canadian Coast Guard if it had had to intervene. Meanwhile, more and more cruise ships are now heading north, despite the fact that they do not meet so-called polar code safety standards—which include specialized training and ice removal equipment.

Svalbard poses a particular challenge for such cruise ships, said Nilsen, the Barents Observer editor, because much of the underwater surface remains unmapped—until recently it was locked in ice. “Many captains [on cruise ship lines] are not experienced in sailing Arctic waters,” he said. 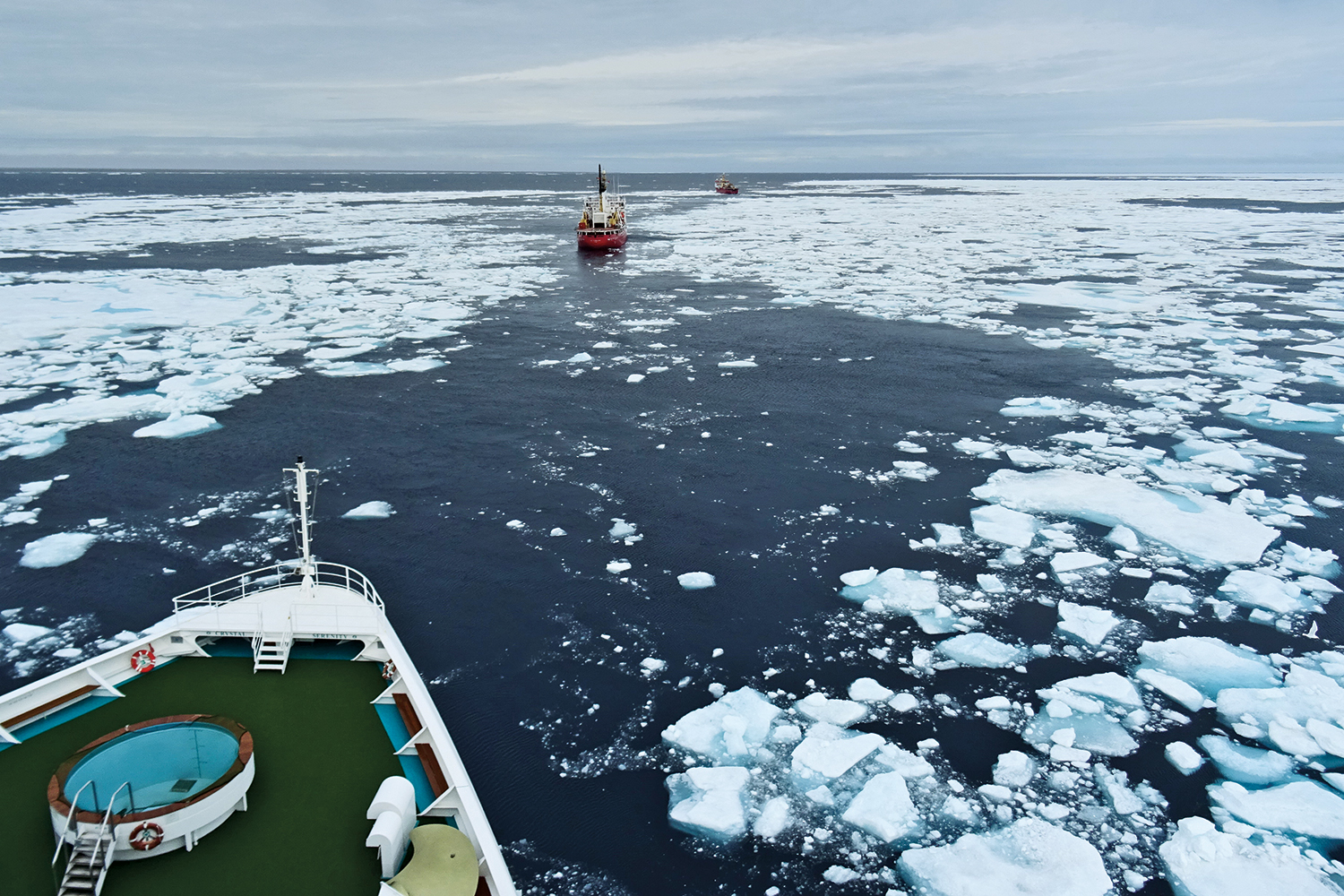 A Canadian icebreaker cuts a path through the Franklin Strait in northern Canada for the luxury cruise ship Crystal Serenity on Aug. 30, 2017. (Christian Haas)

To hedge against the worst, coast guards across the Northern Hemisphere are coordinating their preparations for search and rescue operations and oil spills.

They’re also brushing aside geopolitical tensions. The Norwegian Coast Guard still cooperates with its Russian counterparts to monitor fishing, as well as practice search and rescue operations, even though Norway has suspended its military cooperation with Russia. “We’re business as usual with the Russians in the Coast Guard,” Einarsen said.

Three years ago, eight northern countries—Canada, Denmark, Finland, Iceland, Norway, Russia, Sweden, and the United States—created the Arctic Coast Guard Forum, a new international body to coordinate efforts and promote joint responses to emergencies. Personal relationships are essential. “For our guys to be able to call the Finns, the Swedes, or the Russians [and] say, ‘Hey, we’ve got this situation’ … is super important,” said Ray, the U.S. Coast Guard vice commandant. “This sounds fairly elementary in today’s information age. But the information age hasn’t quite made it to the Arctic.” The forum has helped coast guards communicate with each other, as well as with private shipping industries, and set up joint training exercises, explained Tomi Kivenjuuri, a commander in the Finnish Border Guard.

Meanwhile, the U.S. Coast Guard is pushing Congress to allot $750 million to build a new heavy icebreaker, which could be completed as soon as 2023. And Norway’s Coast Guard is expecting to receive three more large ships, including one as soon as 2020, to replace aging 1980s-era vessels.

But the new ships probably won’t meet the needs of the warming region. And in the meantime, the Harstad and other coast guard ships are all the Arctic has.

Gramer’s trip on the Harstadwas sponsored by the Norwegian Defense Ministry and the Atlantic Council, a Washington-based think tank. This article originally appeared in the Fall 2018 issue of Foreign Policy magazine.

Correction, Sept. 21, 2018: Tomi Kivenjuuri is a commander in the Finnish Border Guard. A previous version of this story mistakenly said Kivenjuuri was the commander of the border guard.