The Return of the Pentagon’s Yoda

At 96 years old, Andrew Marshall, still widely touted as a leading U.S. defense intellectual, has reached an age where people mostly reflect on the past, if they are lucky enough to remember it.

Yet the man who helped coin the phrase “revolution in military affairs”—the idea that at certain moments the introduction of new technology will transform warfare—is still busy thinking about the future, as his Alexandria, Virginia, apartment makes clear: Books on topics ranging from quantum physics to Russian missile defense lie in piles on nearly every surface, spilling over onto the couch and lined up against the walls.

It has been three years since Marshall retired from the U.S. Defense Department, and the famous cold warrior is not ready, like the proverbial old soldier, to fade away. He has just recently recovered from a stroke and subsequent surgery, yet he’s still sharp and focused, and he wants to talk about one of his favorite subjects: the growing threat from China.

“I don’t think they’re doing very well,” he said of the Pentagon’s approach to thinking about warfare. “In the first place, they’re very late to get focused on China as a problem.”

Until he retired in 2015, Marshall headed the Office of Net Assessment, an in-house think tank for the U.S. defense secretary. For more than four decades, Marshall sponsored studies, war games, and formal evaluations of dangers facing the United States.

These days Marshall continues to capture many of the contradictions that characterized his career. He is a futurist who predicted the fall of the Soviet Union, as well as the emergence of China as a world power, and anticipated how technology would transform modern war. But, according to critics, he has also ignored the way information technology—and in particular the mass penetration of the internet—affects national security. Yet rather than his influence waning, his views—at least on China—seem to be gaining currency in the Trump administration. And Marshall, who is now starting a private foundation, remains determined to cement his legacy.

For his devoted acolytes, Marshall falls just short of an omniscient saint. To critics, Marshall is a neoconservative favorite who defended President Ronald Reagan’s quixotic missile defense system, hyped the threat from China, and won favor with scholars using the power of the Pentagon’s purse to fund their studies.

Regardless of how one judges Marshall’s contributions, he represents one of the last of a generation of defense intellectuals that included, on one end of the spectrum, the nuclear futurist Herman Kahn (who was the best man at Marshall’s wedding) and, at the other, the Pentagon Papers leaker Daniel Ellsberg who, before his fall from official grace, was also among Marshall’s circle of friends. Over the years, Donald Rumsfeld, Robert Gates, and Dick Cheney all turned to him regularly for advice.

Marshall got his start in national security at the Rand Corp. in 1949, collaborating with the analysts who defined nuclear strategy during the Cold War. Later, impressed with Marshall’s intellect, Henry Kissinger, then President Richard Nixon’s national security advisor, cajoled Marshall into leaving California for Washington to help assess the Soviets’ military capabilities. By 1973, Marshall was moved to the Pentagon, where he became the head of the newly established Office of Net Assessment. And there he stayed for 42 years, cultivating a group of disciples who called themselves members of “St. Andrew’s Prep.” By the 2000s, Marshall, then in his 80s, had earned the affectionate nickname Yoda.

Though he remained obscure to the public during much of his time in the Pentagon, Marshall achieved near-rock star status within national security circles for challenging bedrock assumptions of the intelligence and defense communities. One of Marshall’s most cited successes was his upending of Cold War assessments of the Soviet Union’s economic and military strength: Marshall argued that the CIA overestimated the Soviets’ GDP and then underestimated the percentage of GNP the country spent on its military. The Soviet economy, he insisted, was much smaller than believed and its military expenditures a bigger burden on it. He was right, and the CIA eventually revised its numbers.

Marshall, who advocated for the analysis of Soviet decision-making in terms of organizational behavior, was an even better master of understanding his own organization, the Pentagon. His ability to stay in his job through eight successive presidential administrations was a testament to his keen ability to maneuver within the Defense Department bureaucracy and Washington politics. When President Bill Clinton’s second defense secretary, William Cohen, tried to exile Marshall and his office to the National Defense University in 1997, legions of Marshall admirers swung into action, lobbying on Capitol Hill and making their case in the press. Marshall stayed put and doubled down on China, which he had long believed to be a potential threat to the United States.

Andy Marshall: I Had No Idea Who Yoda Was

The legendary military strategist reveals a bit of ignorance about his infamous nickname.

Yoda Has Left the Building

Andy Marshall, 93, has been the Pentagon’s futurist in chief for over 50 years. He hasn’t had a new idea since the 1970s.

The books behind the long Pentagon career of Andrew Marshall.

Marshall emerged more publicly in 2001, when then-Defense Secretary Rumsfeld tapped him to help craft a key strategy document called the Quadrennial Defense Review (QDR). But just before the document was set to be released, members of al Qaeda—never a central concern for Marshall or his office—hijacked four planes, including one that slammed into the Pentagon. “Rumsfeld bought this vision [most notably on China], but 9/11 knocked everything off course,” said Aaron Friedberg, a Marshall protégé who is now a professor of politics at Princeton University.

The QDR had been mostly completed before 9/11; it had to be rejiggered, and language on counterterrorism was quickly inserted. As the wars in Afghanistan and Iraq ramped up, the Pentagon’s attention turned away from China. “But Andy didn’t get deflected,” Friedberg said. “The office continued to sponsor work on the maturing and emerging challenge from China.” Despite years of war, Marshall did not show much interest in counterinsurgency or terrorist groups. The Last Warrior—a 2015 biography of Marshall written by Andrew Krepinevich and Barry Watts, two of his intellectual progeny—makes only passing reference to 9/11 and its aftermath.

For Marshall, Afghanistan, Iraq, and the fight against terrorism were just distractions from greater threats posed by Russia and China. “I think our military is too busy with the ongoing warfare,” he told me. “That happened during the Vietnam War. You couldn’t get people in our military to pay attention to what the Russians were doing and what was happening in terms of their investment and new approaches in Central Europe.”

Marshall may not have been interested in counterinsurgency, but he paid attention to unconventional threats. Stephen Lukasik, who held senior positions at Rand and the Defense Department, worked on several studies for Marshall in recent years, including one that looked at a hypothetical private company that built and sold nuclear weapons. Yet even Lukasik, who praised Marshall for his sharp intellect, said cybersecurity was always a blind spot for the Pentagon’s futurist. The idea that the internet could transform national security challenges—whether through election meddling in the United States or a cyberattack against an industrial plant—has never been among his main concerns.

“Andy knew nothing and knows nothing about computers,” said Lukasik, whose proposal to study cybersecurity was dismissed by Marshall’s office.

For those in the Pentagon, including Lukasik, who were instrumental in bringing about the internet age, Marshall’s refusal to consider the implications of cyberwarfare and the global penetration of the internet was a rare moment of myopia for the director of net assessment.

For Marshall, the importance of information technology to national security isn’t online; it’s on the traditional battlefield. The Chinese, he believes, are studying military information operations to disrupt the enemy’s command and control capabilities as an area where they can gain a strategic advantage over the United States. He still laments that one of the last war games he planned to sponsor around 2014—involving China and information operations—never took place.

But even if the Pentagon, as Marshall argues, is late to the game, his decades of hammering away at the China threat have made their mark in a way that may ultimately be his most significant legacy. The Trump administration’s new National Defense Strategy, released in January, signaled a clear shift away from counterinsurgency back to great-power competition of the type Marshall has long emphasized. The document echoes a longtime Marshall theme, describing China as a “strategic competitor using predatory economics to intimidate its neighbors” while militarizing the waters and islands of the South China Sea.

Just acknowledging the threat isn’t enough for Marshall; he still believes that the Pentagon needs to do more to assess China’s military capabilities. “I would think, with respect to China, there would be underway an effort much like we had against the Soviet Union,” he said. “That would involve … as the work in the case of the Soviet Union did, a decade or more to begin to produce really first-rate analyses of particular warfare areas or theaters.” 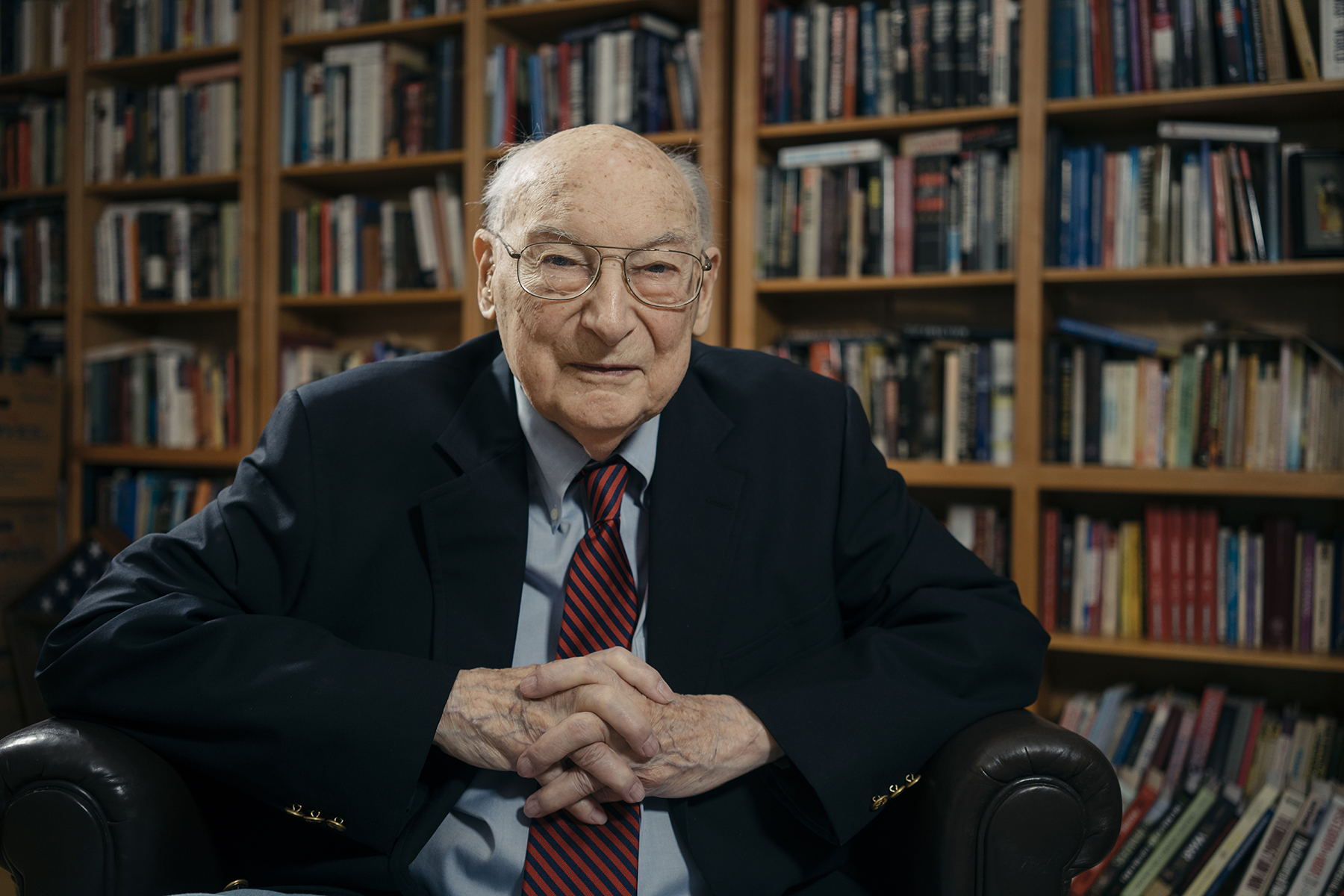 Marshall himself, though almost a centenarian, appears ready to take on some of this work himself. Just a few years after formally retiring, Marshall is embarking on the next stage of his career: launching an eponymous private foundation that will continue the kind of work he did at the Pentagon, sponsoring studies on the future of warfare. “The idea is to try to encourage more people to think and write about the major decisions and choices that we’re likely to be faced with over the next decade or so,” he said of the foundation, which is set to launch in September.

First up on the foundation’s list is a Russia-focused proposal. It harks back to his office’s Cold War study of Soviet military theorists who wrote about future warfare. “I’m interested in having someone look at who are the current set of people [in Russia] who qualify as military theorists and what are they writing,” Marshall said.

The idea is to promote the sort of future-focused studies that are no longer done much in the Office of Net Assessment, said Jaymie Durnan of the Massachusetts Institute of Technology’s Lincoln Laboratory. Durnan worked for Marshall in the Defense Department and is now collaborating with him on the foundation.

Since Marshall left the Pentagon, the Office of Net Assessment has been under pressure to produce studies on problems of more immediate importance to the department, according to Durnan. “The Pentagon has a short timeframe,” he said.

But Heather Babb, a Pentagon spokeswoman, disputed the contention that ONA has become more focused on the immediate future. “The office continues, as it has throughout its history, to focus on the long-term, and to draw on this long-term work to help inform leadership today,” she wrote.

The foundation will also be an opportunity for Marshall, who was often regarded as something of a cypher, to speak openly. “This is for Andy to vent,” Durnan said. “He never pulled his punches privately, but he couldn’t go out and say how stupid the intelligence community is or the Navy’s not doing anything. It’ll be fun.”

If the foundation does finally give Marshall, famously a man of few words, a forum to express his personal views, don’t expect those to be translated into 280 characters. The man who helped define the future of warfare has long refused to embrace one fundamental part of the present: personal computers.

Friends have urged him to get an iPad or Kindle at least, something that would be useful for a voracious reader such as himself, but Marshall has always demurred. He’s online only indirectly: His former assistant at the Pentagon drops by several times a week to read his emails to him and send replies.

This article originally appeared in the Fall 2018 issue of Foreign Policymagazine.