By Colum Lynch, a senior staff writer at Foreign Policy.

Presidents, prime ministers and monarchs from around the globe are flying in to New York this week for the start U.N.’s diplomatic gabfest debate.  FP’s Colum Lynch reports all week from the 73rd U.N. General Assembly in New York.

Presidents, prime ministers and monarchs from around the globe are flying in to New York this week for the start U.N.’s diplomatic gabfest debate.  FP’s Colum Lynch reports all week from the 73rd U.N. General Assembly in New York.

The U.N. General Assembly’s high-level debate kicks off on Manhattan’s east side this week with delegates in a decidedly gloomy mood. Sure, there is a glimmer of hope that North Korean nuclear talks could inch forward. And U.S. Secretary of State Mike Pompeo said President Donald Trump was open to talks with Iranian President Hassan Rouhani. But beyond the midtown gridlock, and the heightened security protocols that can make U.N. summitry oppressive in the best of times, there is little expectation of breakthroughs on the most pressing conflicts of the day: Syria and Yemen, where a senior U.N. official warned that the world is “losing the fight against famine.” The best one can hope for in Syria is that President Bashar al-Assad, and his backers in Tehran and Moscow, don’t launch an all-out offensive against rebel forces in Idlib, threatening the lives of some 3 million civilians.

President Trump returns to his old Manhattan stomping ground after a year spent roiling international trade relations, hobnobbing with North Korean leader Kim Jong Un, and upending NATO summitry. Trump intends to use the gathering or world leaders to reinforce his America First message, confront Iran, and put poor countries on notice that they better support U.S. diplomatic goals or risk U.S. financial assistance. Trump “will lay down a marker that while the United States is generous we’re going to be generous to those who share our values,” Nikki Haley, the U.S. envoy, told reporters. The generosity, she added, will not be extended to those that “try and stop the United States or say they hate America.” 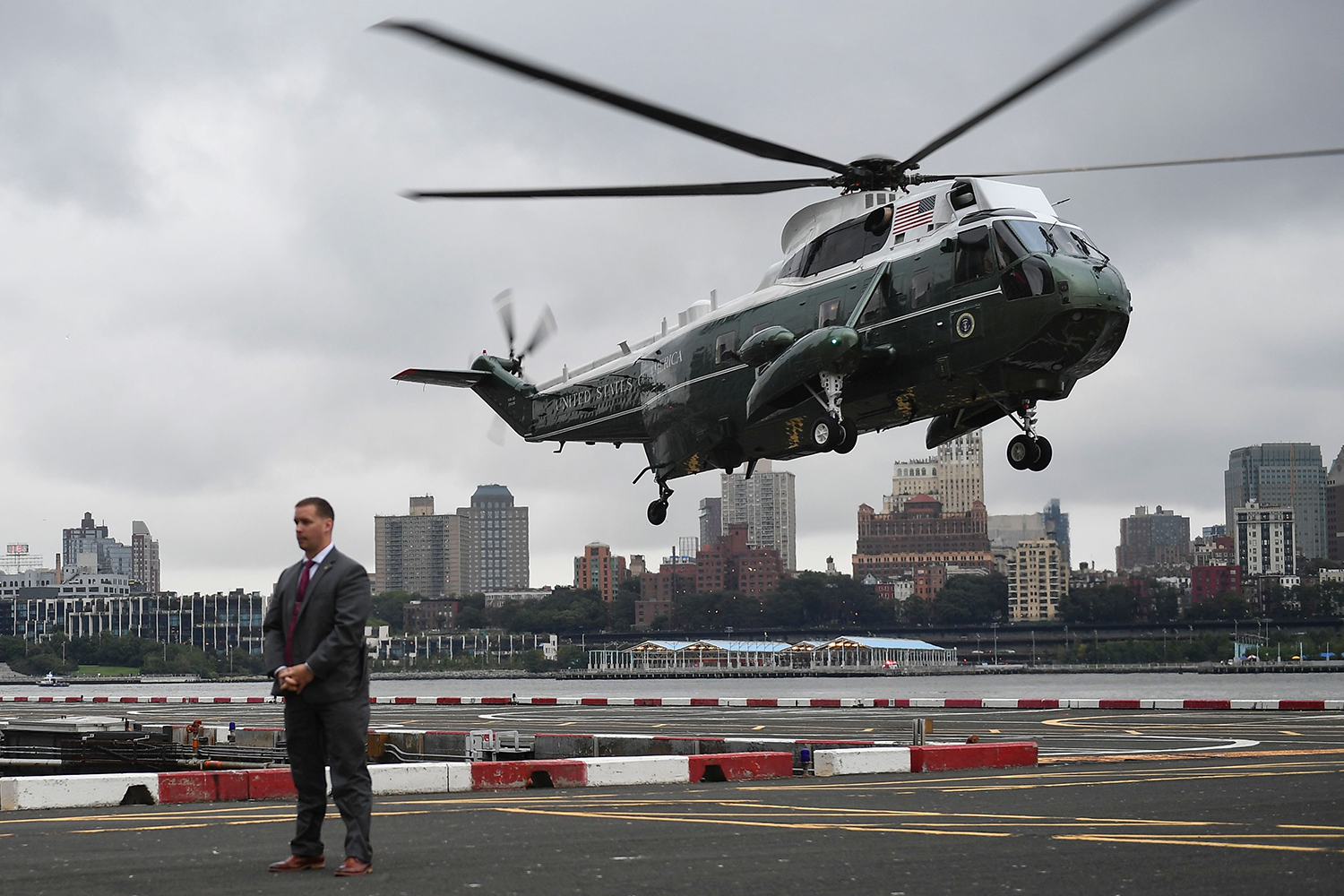 On Monday morning, Trump will host his first U.N. meeting of the week at an event titled Global Call to Action on the World Drug Problem. The session should serve as a warm up for Trump’s Tuesday morning address to the U.N. General Assembly, where, according to Haley, he will recount “the foreign policy successes the United States has had over the last year and where we are going to go from here.”

The international drug meeting will give Trump an opportunity to play the role of world leader.

With federal investigators closing in on the president’s campaign advisors, and Bob Woodward having published a scathing account of White House dysfunction, the international drug meeting will give Trump an opportunity to play the role of world leader.

In this case, the White House will write the script. Representatives of the more than 120 countries—including Britain, China, Russia, and Saudi Arabia—attending the meeting  are required to sign on to a U.S.-drafted declaration they had no hand in negotiating. The documents recommit countries to a slew of international agreements, including the U.N. convention on transnational organized crime and the wider drug trade. In order to attend, they will have to pledge their support for an “national action plan” calling for greater international cooperation on law enforcement, education, justice and drug treatment.

If drug conferences aren’t your thing, the U.N. Children’s Fund, UNICEF, has invited the famous K-Pop boy band, BTS, to join U.N. Secretary General Antonio Guterres, UNICEF goodwill ambassador and YouTube sensation, Lily Singh, to promote job-training skills adolescents and young adults. One of BTS’s band members is planning to deliver a speech. There is an unconfirmed rumor there might be dancing. Unfortunately, Britain’s Prime Minister, Theresa May, whose two-step shuffle went viral during a recent visit to Africa, will not arrive in New York in time to show off her moves.

U.N.’s Guterres Has a Plan to Reboot Multilateralism

The newly reelected secretary-general wants the world to work together to battle pandemics, inequality, and climate change.

The informal deal offers common ground with Beijing and a blow to Myanmar’s hopes of legitimacy.

The State Department Returns to UNGA:

Last year, President Donald Trump’s then-top diplomat, Rex Tillerson, marked America’s retreat from diplomacy by dramatically scaling back the presence of U.S. officials at the U.N. General Assembly debate; his aides declared Washington would have a “toe-print, not a footprint” at the world’s largest gathering of world leaders. Current U.S. Secretary of State Mike Pompeo—the man who vowed to restore the the departments swagger—has assured State Department staff that he intends to expand the U.S. diplomatic presence at the U.N. General Assembly.

Team Trump’s performances at UNGA will focus on five themes, according to State Department spokesperson Heather Nauert: WMD’s and nonproliferation; humanitarian crises; the world drug problem; global efforts to defeat the Islamic State and other terrorist groups; and “meaningful and lasting” U.N. reform.

“What we will try to do is have all hands on deck,” Nikki Haley said.

“What we will try to do is have all hands on deck,” Haley said. The U.S. delegation will include Vice President Mike Pence, who will be attending a session on Venezuelan migration; Treasury Secretary Steve Mnuchin; USAID administrator Mark Green; U.S. Trade representative Robert Lighthizer; and, of course, the First Daughter, Ivanka Trump.

No word yet on whether the president’s son-in-law Jared Kushner will attend. But it’s hard to imagine he would miss an opportunity like this to try to sell his long-awaited Middle East peace plan.

As for Pompeo, he is scheduled to preside over a special session of the Security Council on North Korea, and is expected to seek support for Washington’s maximum pressure campaign from other major powers. In a series of interviews on weekend talk shows, Pompeo said he was hoping to talk to North Korean diplomats on the sidelines of the U.N. General Assembly to prepare the groundwork for a second summit. “President Trump very much is prepared to meet with Chairman Kim at the right time,” he told NBC News’ Chuck Todd on Meet the Press.

Kofi Annan, one of the U.N.’s most popular secretary generals, passed away last month in Bern, Switzerland. Annan will be honored with a minute of silence at the opening of the high level meeting of the General Assembly on Tuesday. 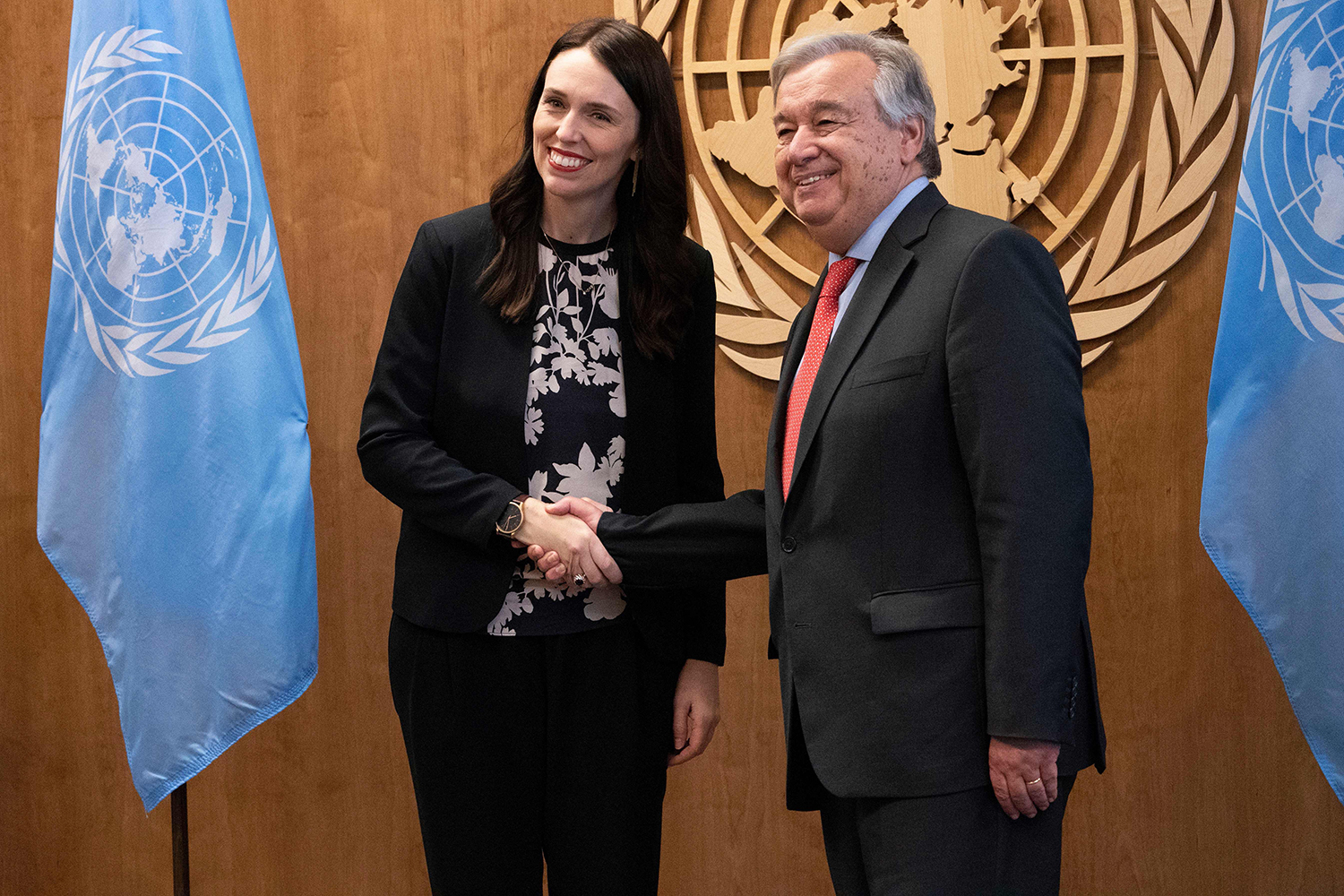 But it was Jacinda Ardern, New Zealand’s 38-year-old Prime Minister, who has snagged bookings during UNGA week on NBC’s Today Show, the Late Show with Stephen Colbert, as well as an interview with CNN’s Christiane Amanpour.

The Labour Party leader will be making her debut performance at the U.N., promoting international action on global warming and highlighting the need for more multilateralism.

Ardern, the world’s youngest female leader, will also have to balance her diplomacy with child rearing. Ardern is the first head of state to give birth in office since the late Pakistani leader, Benazir Bhutto, and she will be accompanied by her infant daughter, Neve, who was born in June. “Can I be a Prime Minister and a mother? Absolutely,” she said in an interview earlier this year with the Today Show’s Cynthia McFadden. “Will I have help to do it? Yes.” Her partner, Clarke Gayford, will be in New York to help take care of the baby.

“Perhaps fittingly the programme for (the UN meeting) is focused on things like women, children, and climate change—very strong themes in those areas,” she told AFP last month. “Something that every parent has gone through and yet I absolutely accept this layer of interest because it’s not our normal yet. But one day it will be.”

Back to the Future:

Every day, U.N. Brief will look back at some pivotal, or just plain interesting, moment in U.N. General Assembly history:

Little Donald Trump was only four months old when President Harry S. Truman delivered his address to the inaugural U.N. General Assembly debate, held at Assembly Hall in Trump’s hometown, Queens, New York. The meeting of world leaders, Truman noted, “symbolizes the abandonment by the United States of a policy of isolation.” In his own maiden speech to the U.N. General Assembly, Trump drew a different lesson from Truman’s speech, borrowing a passage that proclaimed “the success of the United Nations depends upon the independent strength of its members.” In place of Truman’s farewell to isolation, Trump pledged to turn the United States inward, vowing to renew and reinvigorate the “principle of sovereignty.”

“I will always put America first, just like you, as the leaders of your countries will always, and should always, put your countries first,” he said. In a year in which the United States has withdrawn from the Iran nuclear deal, pulled out of the global compact on migration, and threatened to try International Criminal Court prosecutors if they pursue U.S. nationals, it’s fair to say that the isolationism is back in fashion. In previewing the president’s plans for UNGA week, Haley noted that “he wants to talk about protecting U.S. sovereignty.”

FP State Department reporter Robbie Gramer contributed to this report. Sign up here to receive U.N. Brief in your inbox every morning this week.

NEW FOR SUBSCRIBERS: Want to read more on this topic or region? Click + to receive email alerts when new stories are published on United Nations

U.N.’s Guterres Has a Plan to Reboot Multilateralism

The newly reelected secretary-general wants the world to work together to battle pandemics, inequality, and climate change.

The informal deal offers common ground with Beijing and a blow to Myanmar’s hopes of legitimacy.