Sign up here to receive U.N. Brief in your inbox every morning through Friday.

For some U.N.-based foreign dignitaries, there is an all-consuming question on the eve of Tuesday’s high-level debate before the U.N. General Assembly. Who might President Donald Trump cast as his villain? Whether on the campaign trail, or in the Oval Office, Trump has routinely found new and disparaging ways to knock down potential rivals or political enemies. Think Crooked Hillary, Animal Assad or Justin From Canada. Last year, Trump singled out Kim Jong Un for scorn, mocking the North Korean leader as “little rocket man.”

But with Trump preparing for a second summit with Chairman Kim—whom he referred to warmly Monday as “terrific, frankly”—the U.S. president may have to look elsewhere for someone to mock. Two likely candidates for Trump’s fire and fury are Iranian President Hassan Rouhani, and Mahmoud Abbas, the Palestinian leader who has resisted attempts by Trump and his son-in-law Jared Kushner to participate in U.S.-led diplomatic talks with Israel, dismissing the administration’s peace plan as “dead on arrival.” Perhaps he might hurl some invective at Chinese leader Xi Jinping, who answered Trump’s latest tariff on $200 million in Chinese imports with $60 billion in retaliatory tariffs on U.S. goods.

In his speech Tuesday, Trump will return to a theme from his last U.N. General Assembly speech, the primacy of national sovereignty in international relations. He will also tout his successes, including his effort to tamp down U.S. tensions with North Korea—tensions he helped fan during his first months in office. Trump will also deliver “well-deserved strong words for the Iranian regime, which is among the worst violators of the U.N. Security Council,” Secretary of State Mike Pompeo told reporters at a joint press conference with Nikki Haley, the U.S. ambassador to United Nations, and John Bolton, the U.S. national security advisor, Monday at the New York Hilton Hotel. “He’ll call on every country to join our pressure campaign in order to thwart Iran’s global torrent of destructive activity.”

U.N. Secretary General António Guterres recently warned that “multilateralism is under attack from many directions,” and vowed to use his speech and meetings during UNGA week to “press for a renewed commitment to a rules based order and to the United Nations.”

In his opening address to the U.N. General Assembly, Guterres will contend that democracy is in retreat, and the rules-based international order is under threat of unraveling. The remedy, he will argue, is a reinvigorated multilateralism that can demonstrate its worth by advancing peace, human rights, and social progress, according to senior U.N. officials.

Guterres will remind world leaders that several key challenges he put before the General Assembly a year ago—including conflicts in Syria and Yemen, backtracking on human rights by governments, the threat of nuclear war, migration, and the spread of terror—have not been resolved. But he will devote particular attention to two international challenges: global warming and the growing risk posed by advances in technology, including the misuse of cyberspace for everything from human trafficking to the disruption of elections. 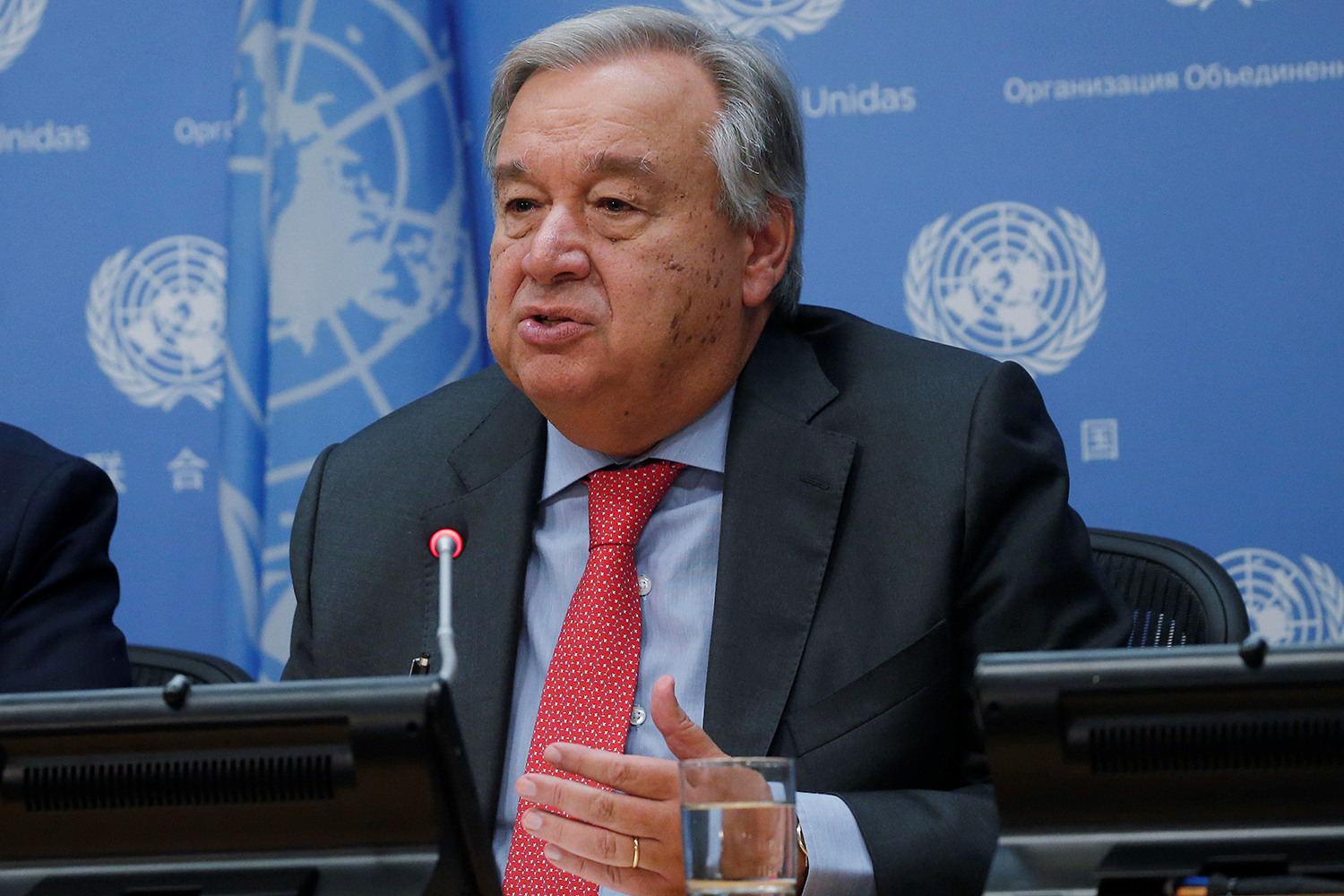 The former Portuguese prime minister will also draw attention to the growing threat posed by artificial intelligence, which could result in chaos in labor markets, and in the development of a new generation of autonomous armed weapons. The speech will not be limited to gloom and doom. Guterres plans to point to a handful of positive developments on the foreign policy front, including nuclear negotiations between the United States and North Korea and a peace deal ending the conflict between Ethiopia and Eritrea.

Washington’s interactions with the rest of the world are becoming increasingly marked by “isolationism and unilateralism,” he said. France, he added, believes that “multilateralism is strength.”

“We cannot resolve to have every country, or every man, for himself,” French Foreign Minister Jean-Yves Le Drian said.

“We cannot resolve to have every country, or every man, for himself.”

Syria Has Won The War, But Not the Peace

The French foreign minister told reporters that he welcomed a Sept. 17 ceasefire agreement signed by Russia and Turkey, aimed at reducing tensions in Idlib. The pact calls for the establishment next month of a 9-12 mile demilitarized zone separating Syrian troops and tens of thousands of rebel forces. Russian and Turkish troops will share responsibility for monitoring the zone. Opposition fighters will be required to hand over their heavy weapons and mortars to Turkish troops.

Le Drian said that France was unwilling to act on a Turkish request to have the U.N. Security Council endorse the pact, unless it was part of a broader resolution addressing the need for a political transition in Syria. He said that “opens space for diplomacy but does not put an end to war,” noting that Iran and Syria have signed it.  “Assad wants to reconquer all of Syria,” he said. “His only strategy is war, war, war and war.”

The administration insists it can succeed where two U.S. presidents already tried and failed.

Despite the Trump administration’s declaration of a genocide in Xinjiang, upheld by the Biden administration, some legal experts suspect China’s behavior may fall short of actual genocide.

Biden’s Pick for U.N. Ambassador Will Have to Juggle Containment and Collaboration With China

The administration is moving quickly to reassert U.S. leadership but needs Beijing’s support for major initiatives.

Sovereignty may seem like an “abstract concept” to many, Bolton explained at a press conference at the New York Hilton Hotel in midtown. “It derives, obviously, from the word “sovereign,” meaning the monarch.” But seen through the prism of the United States’ democratic experience, he said, it takes on an entirely different meaning.

Just in time for UNGA, the United Nations found itself grappling with an embarrassing security breach. On Monday, the Intercept reported that the U.N. accidentally published a slew of sensitive information—including documents, credentials for a U.N. server, and video conferencing systems—on publicly-accessible project management sites like Trello and Google Docs. Kushgara Pathak, a security researcher, first discovered the mishap and told the Intercept he notified the U.N. about it a month ago. “As of today, much of the material appears to have been taken down,” the Intercept reports.

No Seat At The Table

The United States is traditionally the most sought after guest for high level U.N. gatherings and conferences. The United States recently slashed hundreds of millions of dollars in financial assistance to Palestinian refugees, hoping that the move would compel Palestinian President Mahmoud Abbas to participate in U.S.-led peace talks with Israel. On Thursday, foreign ministers from Germany, Japan, Jordan, Sweden, Turkey, and the European Union will co-host a lunch with U.N. Secretary General António Guterres to explore ways to fill the $185 million gap in funding. But the Americans did not get an invitation.

Enjoying U.N. Brief? Sign up here to receive it in your inbox every morning through Friday.

The U.S.-backed, Saudi-led war against Houthi rebels in Yemen has led to a situation in which 8 million civilians are in need of emergency food handouts to survive, meaning they don’t know where they will find their next meal, according to U.N. figures. The U.N. estimates that number could soon grow by 3.5 million more desperately hungry people. “We are already seeing pockets of famine-like conditions—including cases where people are eating leaves because they have no other form of sustenance,” Mark Lowcock, the U.N.’s Emergency Relief Coordinator told the Security Council last week.

The Old Guard Leaves the Scene

This will be the first U.N. General Assembly debate since President Robert Mugabe was forced out as Zimbabwe’s leader, marking the end of a generation of revolutionary bad boys like Fidel Castro, Hugo Chavez, and Col. Muammar Gaddafi, who stirred anti-American sentiment among U.N. diplomatic audiences for decades. In September 2006, then-Venezuelan President Hugo Chavez, speaking at the U.N. General Assembly podium a day after President George W. Bush, called the U.S. leader “the devil,” made the sign of the cross, and declared “it smells of sulfur still today.”

In his final address, the then 93-year-old Mugabe remained faithful to that tradition, claiming that some world leaders were “embarrassed, if not frightened, by what appeared to be the return of the biblical Giant Gold Goliath”—an unmistakable swipe at Trump. So, who is picking up the torch? Cuban President Miguel Díaz-Canel, delivering his first address to the U.N. General Assembly as Cuba’s leader, will excoriate the United States for maintaining its decades old embargo on Cuba. But he lacks Fidel’s fiery oratorical chops.

Will He Stay or Will He Go

Nicaraguan President Daniel Ortega’s attendance at this year U.N. summit had been confirmed by the Nicaraguan mission to the United Nations. But there were some last-minute signs of hesitation, making it unclear whether he will take the podium  for the first time since 2007. The Sandinista leader was a regular presence at the United Nations in the 1980s, delivering blistering attacks on President Ronald Reagan, whose administration armed the Contra rebels in an attempt to overthrow Ortega’s Sandinistas.

After his returned to the presidency in 2007, Ortega came back to the U.N., where he denounced George W. Bush’s administration as champions of the “the tyranny of global imperialist capitalism” that “dictate as if they were gods.” This time around, Ortega is facing charges of persecuting Nicaraguans. The Office of the U.N. High Commissioner for Human Rights recently published a damning report, accusing Ortega’s government of engaging in a repressive reign of terror aimed at stifling protests. Since the protests began in April, more than 300 people have been killed, and thousands have fled to neighboring Costa Rica in search of political asylum.

Sign up here to receive U.N. Brief in your inbox every morning through Friday.

The administration insists it can succeed where two U.S. presidents already tried and failed.

Despite the Trump administration’s declaration of a genocide in Xinjiang, upheld by the Biden administration, some legal experts suspect China’s behavior may fall short of actual genocide.

Biden’s Pick for U.N. Ambassador Will Have to Juggle Containment and Collaboration With China

The administration is moving quickly to reassert U.S. leadership but needs Beijing’s support for major initiatives.