America is losing African and Asian students to China.

In a recent Chinese national television program, a group of Kenyan students gamely grapple with their professor’s instructions in a classroom adorned with Mandarin characters. They are not studying in Nairobi but at China’s prestigious Peking University. The Kenyan students explain how China has given them full scholarships to receive educational opportunities they are deprived of at home and how they will gain skills they can take back to enrich their own countries.

China is keen to promote itself as a benefactor of international students. On the other side of the Pacific, the United States—the country that has actively inspired the world’s smartest and most curious students to come study on its shores for generations—seems to be moving in the opposite direction. Through a series of policies and actions, the Trump administration is driving foreign students away from the United States. Chinese students themselves only narrowly avoided being victims of a total ban pushed by Trump staffer Stephen Miller. China views this accelerating trend as an opportunity to fill the gap. In many parts of Africa and Asia, this change is already underway. And as foreign students pick Chinese campuses over U.S. ones, a critical element of America’s soft power is in danger of being eroded.

The United States is still the world’s hub when it comes to higher education. In 2016, more than 1 million international students enrolled at U.S. colleges and universities, while fewer than half a million studied in Chinese higher education institutions.

At the same time as China has endeavored to expand its international higher education system, the U.S. government has scaled back its financial commitments. The Fulbright Program, a hallmark of U.S. cultural diplomacy since 1946, has faced calls for funding cuts since the Obama administration. Generations of participants—who are sponsored by the U.S. government—have gone on to important positions in academia, politics, think tanks, journalism, arts, and business around the world. Despite this impressive legacy, the Trump administration recommended a 71 percent reduction in funding for the program in its 2019 budget proposal.

Public universities and colleges around the United States have also seen reduced government funding. This move has driven up tuition costs and diminished the quality of education. Between 2005 and 2015, the price of an undergraduate education rose by 34 percent at public institutions and 26 percent at private nonprofit institutions.

America’s rising tuition costs and limited scholarship opportunities for international students have left the U.S. education system inaccessible for many parts of the world. Canada and Australia boast friendlier work visa policies and lower tuition costs, but even they are a stretch for the many students from low- or middle-income countries. In contrast, China has energetically rolled out policies and generous financial aid packages to attract students from Asia and Africa.

China has employed a number of policy tools to promote its offerings in higher education, with a special focus on attracting students from areas where trade and diplomatic ties are also deepening. Between 2003 and 2016, the total enrollment of students from Thailand, Laos, Pakistan, and Russia all expanded more than tenfold. Postsecondary students from Kazakhstan—a key target of China’s Belt and Road Initiative—multiplied by an astonishing factor of 65.

Over the past decade, China has focused on improving the quality of its higher education system while also expanding its pool of government scholarships for foreign students. In 2017, about 1 in 9 international students received Chinese government funding. From 2000 to 2017, the total number of grant recipients multiplied almost elevenfold. More universities are offering programs in English and are striving to improve the quality of teaching and research. China’s expansive trade and infrastructure projects across Africa and Asia have raised the value of a Chinese education, which students can use to pursue China-related job opportunities back home. 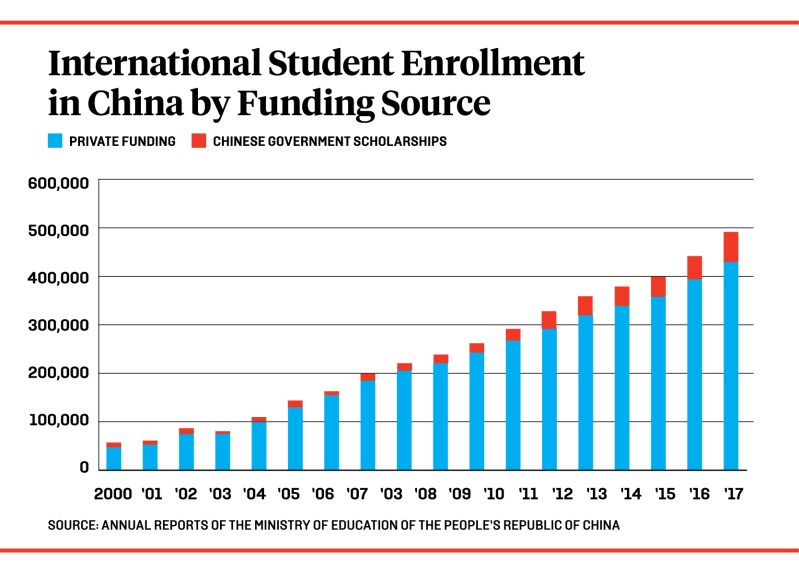 For some students, of course, even a free degree from a Chinese institution may fail to compete with a U.S. education that upholds liberal values and political openness—especially as clampdowns on intellectual freedom on Chinese campuses have heightened in recent years. But for others, U.S. values and ideals cannot match the promise of an affordable education in China, which not only often comes with scholarships but also the prospect of additional China-related job opportunities once returning home.

As a form of cultural diplomacy, Chinese policymakers are optimistic about the role education can play in promoting foreign relations. To some extent, today’s China is forging the same path from which the United States has strayed. For decades, especially during the Cold War, U.S. political leaders saw international education—particularly of future leaders—as a potent way to spread U.S. values, promote peaceful evolution, and eventually influence other countries’ development. But their faith in this endeavor has waned as the mixed results of U.S. engagement show that foreign students do not necessarily become more amenable to U.S. values and ideas by studying in the United States. And given the recent surge of populism in the United States, leaders are now more likely to prioritize domestic policy over cultural diplomacy.

Impacting education is a slow process, and educational systems are especially slow to change. In the years to come, the United States will continue to be the gold standard for international higher education. Its celebration of unfettered inquiry and independent thinking, along with its ability to produce the most innovative research and cutting-edge technologies, will continue to be the envy of the world. But the degree to which U.S. soft power finds a foothold in the developing countries of Africa and Asia will depend, at least in part, on the financial accessibility of a U.S. education. Unless the United States is able to create more affordable educational opportunities for these students, its chance to influence them could gradually fade, especially if it comes to compete with the educational offerings of an ambitious economic powerhouse such as China.

Chinese Universities, Coming to a Neighborhood Near You

Ventures in Seattle — and Laos, and Malaysia — are all part of a new soft-power push.

The U.S. political climate could also drive down international student enrollment. With President Donald Trump’s “America First” rhetoric and the rise of populism and xenophobia, foreign students may eschew education in the United States for fear of being unwelcomed or excluded. The Trump administration’s policy capriciousness further adds to students’ concerns, as their academic pursuits could be suddenly compromised by political motives. The Trump administration has already used limitations on student visas as a negotiation tactic to stop alleged intellectual property theft by countries such as China. If the administration continues to blur the lines among education, economics, and national security, it could damage the integrity of America’s international higher education system.

In 2010, China vowed to build an international education system on par with its global status and to “foster a large number of graduates who understand China and befriend China.” But China pledges many things, and not all of them come to be. Although the United States has seemingly pulled back from the front line of attracting international students, its educational system maintains distinct advantages that China would have a hard time replicating even if it did not already face hard domestic political constraints.

Yet, if China’s ambitions in Africa and Asia in fact come to fruition, the United States may one day wake up to discover a generation of leaders and elites in those countries who are more familiar—and comfortable—with Beijing than New York.

Charlotte Yang is a Master of Public Policy candidate at the Harvard Kennedy School.

Chinese Universities, Coming to a Neighborhood Near You

Ventures in Seattle — and Laos, and Malaysia — are all part of a new soft-power push.

Leaving the WHO Will Hurt Americans’ Health