Australia’s economy is addicted to immigration, requiring ever-increasing infusions of new people to stave off an inevitable collapse.

By Salvatore Babones, an adjunct scholar at the Centre for Independent Studies in Sydney.
October 3, 2018, 12:00 PM

A few developing countries such as China can match that record, of course, but no other developed economy even comes close. When even China started to slow down in 2012, it raised fears among commodity exporters like Australia. Iron and coal are Australia’s top two exports, and China is their No. 1 destination. But even then, Australia’s GDP growth merely slowed from 3.9 percent in 2012 to 2.6 percent in 2013. Other developed countries might be thrilled just to reach 2.6 percent in the first place.

But Australia’s extraordinary economic statistics mask a more difficult economic reality. At the lowest point in the spring and summer of 2013, Australia’s quarterly growth rates fell to 1.7 percent. At the same time, Australia’s population was growing at an annualized rate of 1.8 percent. Measured in per capita terms, then, Australia’s economy actually shrank for two consecutive quarters.

Australia also experienced a “per capita recession” for four quarters during the global financial crisis and for two quarters during the dot-com bust of 2000. It recorded a quarter of negative per-capita GDP growth in 2003. Viewed this way, Australia’s economy has in fact matched every U.S. recession of the last 40 years, with one additional slowdown in the first half of 1986. 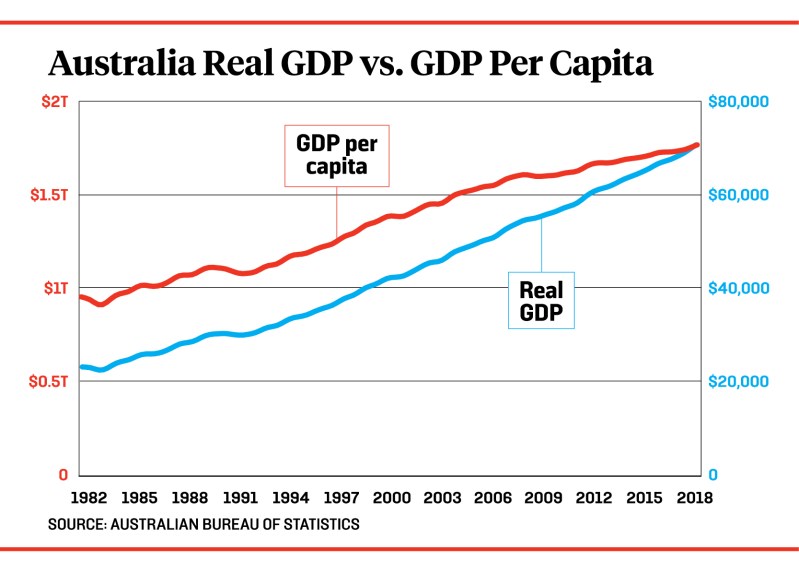 Economists don’t usually bother to adjust quarterly GDP statistics for population growth. For most developed nations, population growth is so slow and steady as to hardly matter on such a short-term time horizon. Not so for Australia. Australia’s population has grown by nearly 45 percent since 1991. No other major developed country even comes close to that rate.

Unlike similarly fast-growing countries in Africa and the Middle East, Australia doesn’t have a particularly high fertility rate. In fact, the rate is well below the replacement level required to keep its population stable. The majority of Australia’s population growth comes from immigration. In turn, Australia’s so-called economic miracle is based on immigration, too.

The Australian Bureau of Statistics reckons that Australia’s population passed the 25 million mark “just after 11 p.m.” on Aug. 7. That represents a doubling of the country’s population in less than 50 years. An equivalent growth rate in the United States since 1970 would have made for two extra Californias on top of the country’s actual population growth over the last half-century.

At the same time, 50 years of unparalleled immigration have given Australia the largest foreign-born population of any major developed country in modern times. As of 2016, over 28 percent of people in Australia were not born there. With immigration hitting new records in the 2017 to 2018 fiscal year, that figure is almost certain to breach 30 percent by the end of the decade. Immigration is now adding nearly 1 percent per year to Australia’s population. By contrast, in the United States today, nearly 14 percent of the population is foreign-born. For America, that is nearly a record. The American foreign-born population never exceeded 15 percent even in the 1890s heyday of mass immigration. 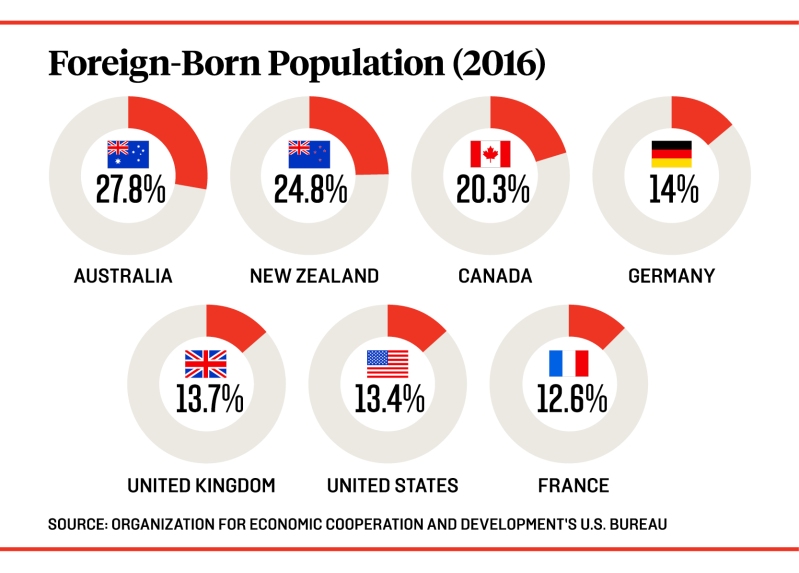 Australia is, in essence, in the midst of an unprecedented experiment in mass immigration the likes of which the developed world has never seen. And this influx of people feeds into its growth story through several channels. The first is that more people means more demand—for everything, but especially for housing. A typical four-bedroom house in a middle-class suburb about 20 miles west of central Sydney will set you back around 1 million Australian dollars (about $700,000). Mass immigration has also led to a massive building boom that still has not kept pace with population growth in Australia’s major metropolitan areas.

The second has to do with labor. In Australia, immigrants are selected based on a points system of the kind that U.S. President Donald Trump has proposed for the United States. More than two-thirds of permanent migrants to Australia are admitted on account of their education and skills. These immigrants often fail to find work that corresponds to their professional qualifications. Nonetheless, they are usually working-age adults in the most productive periods of their lives. 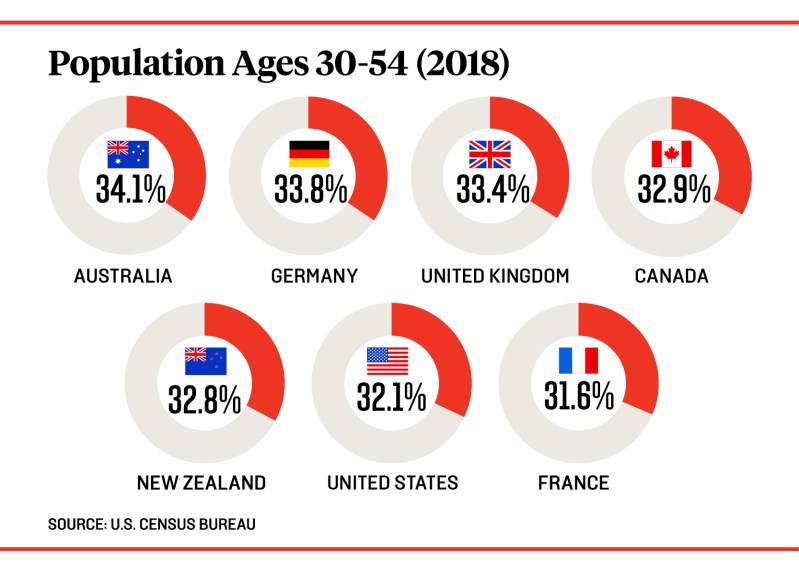 Their presence gives the economy a boost—and saves the government a lot of money. Australia has a universal single-payer health care system called Medicare, which is similar to the U.S. Medicare program but is open to all citizens and permanent residents. With immigration continuously boosting the population of healthy, working-age, taxpaying adults who need little medical care, Australia is able to support its national health system at relatively low cost.

Third, Australia has even managed to turn immigration into an export industry. After minerals, Australia’s largest “export” may well be educational services, represented by tuition fees paid by international students studying in Australia. It is an open secret that most of these students view an Australian degree as a back door to permanent residency. In effect, Australian universities are selling more than just a quality education. They are selling the hope of a permanent resident visa along with it.

Inevitably, all these economic and budgetary upsides come at a price. Roads are clogged, schools are full, power grids are strained, and housing is scarce. Politicians and activists of all shades agree that Australia’s infrastructure is not keeping up with population growth. And then there are the social tensions that result from mass immigration, ranging from the voluntary self-segregation of ethnic communities to outright racism and social exclusion.

In fact, a majority or plurality of voters who identify with every major political party in Australia express a preference for less immigration. Yet, as in the United States, calls for reductions in the level of immigration are repeatedly answered with charges of racism. Certainly there is racism in Australia, as in every country. But when a country allows some of the highest levels of legal immigration in the world, twice as much as the United States did in its most immigrant-friendly era, it seems reasonable for people to ask: How much is too much?

And beyond the social strain, there is the economy to think about: As Australia’s population grows, the country needs exponentially more and more immigrants in order to continue to reap the same economic benefits. As a result, Australia’s heavy reliance on immigration to float the economy and fund government budgets runs the risk of turning into a giant immigration Ponzi scheme. So far, Australia has more or less been able to stretch existing infrastructure to accommodate a much larger population. But sooner or later, things will come to a head. When they do, Australia may experience the world’s first immigration economic crash.

Salvatore Babones is an adjunct scholar at the Centre for Independent Studies in Sydney. Twitter: @sbabones

NEW FOR SUBSCRIBERS: Want to read more on this topic or region? Click + to receive email alerts when new stories are published on Economics, Australia