Is the World Ready for the Next Big Tsunami?

The latest disaster in Indonesia shows the need for the global system put in place in the wake of 2004’s devastating waves.

The twin earthquake-tsunami disaster in Indonesia late last week raised new questions about how prepared the global system is to react to future events. Since the 2004 Indian Ocean tsunami devastated countries throughout the region, a global system of regional and national centers has sprung up to react to the first tremors along the ocean floor. The response of individual countries now largely relies on a densely interconnected system of seismological data detection centers and high-tech ocean buoys. The regional data analysis and dissemination systems in the Pacific and Indian Oceans, in the Northeast Atlantic, Mediterranean, and Caribbean provide one strong example of international cooperation. “Tsunami forecasting is an excellent example of how science, diplomacy, and [international relations] come together for common good and to save lives,” said Christa von Hillebrandt-Andrade, the manager of the U.S. National Oceanic and Atmospheric Administration and National Weather Service’s Caribbean Tsunami Warning Program in Mayagüez, Puerto Rico. When a major wave propagates, as Harry Yeh, a professor of engineering at Oregon State University, put it, “it’s not the one country’s business.” The four regional tsunami warning and mitigation systems operate under the guidance of UNESCO’s Intergovernmental Oceanographic Commission.

When an earthquake of large magnitude is detected in the ocean, seismic information is transmitted to regional tsunami warning centers, including the U.S. Pacific Tsunami Warning Center in Hawaii. This sets off an initial phase of a tsunami warning, or a preliminary forecast. As the tsunami begins to travel, the waves activate deep-ocean assessment and reporting of tsunami (DART) systems consisting of a pressure recorder on the ocean floor and a surface buoy, communicating in real time. These sensors detect wave heights and communicate via satellite, allowing regional centers to estimate time of arrival and continue to update the tsunami warnings. These buoys were originally developed by the U.S. National Oceanic and Atmospheric Administration, or NOAA, which owns and manages 39 of the sensors in the global array. More than 30 are deployed in the Pacific, the region of highest risk.

But once the tsunami warning is transmitted to regional and national tsunami warning centers, the national capability to mitigate damage depends on how prepared countries are to send emergency messages and evacuation orders, mobilize emergency services, shut down some areas of infrastructure and transportation, and respond to injuries. After the recent Indonesia disaster cost more than 1,500 lives, there have been immediate questions as to the failure of the cellphone and siren alert system. In addition, many coastal communities still need more training in how to respond at the individual level, said von Hillebrandt-Andrade and Diego Arcas, the director of the NOAA Center for Tsunami Research at the Pacific Marine Environmental Laboratory in Seattle. 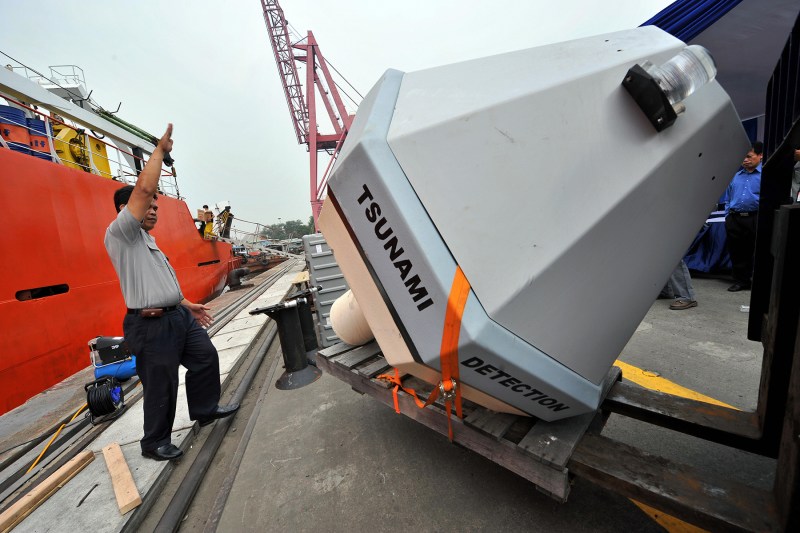 The Indian Ocean system encompasses 25 seismographic stations and eight DART buoys owned and operated by Australia, India, and Thailand, which relay data to 26 national information centers (as of 2015), as well as the U.S. warning center in Hawaii and the Japan Meteorological Agency. National governments then use SMS messages, mosque loudspeakers, and sirens to warn citizens. Though he emphasized that the Ring of Fire-adjacent nations of the Pacific zone are at the most risk, Yeh warned of tsunamis affecting “some hot areas in the Indian Ocean, the eastern part of Iran, and Pakistan. There is historic evidence that could create a tsunami from there—there is a subduction zone that potentially could generate a large earthquake.”

Per reporting from Reuters, the response to the 2012 earthquake off northern Indonesia demonstrated improvement in the region—Sri Lanka used a “tsunami evacuation” button in an emergency control room in Colombo to alert 75 warning towers, resulting in the evacuation of 3 million people within 20 minutes. In Bangkok, Thailand’s national disaster warning center can coordinate with coastal provinces, where sirens alert people to evacuate through established routes.

However, last week’s tsunami in Indonesia has raised criticisms of the national system there, which relied on 22 nonfunctional sensor buoys. The quake hit along the shore of the Indonesian island of Sulawesi, too far from oceanic sensors to register, and the alert system failed to reach most beachgoers in time. In the town of Palu, at least 70,000 have been left homeless. And in the vicinity of Palu, according to von Hillebrandt-Andrade, sea level stations’ data was accessible to authorities in Indonesia but not to the international community and to people within the country, creating a dangerous lack of situational awareness.

But in early September, the Intergovernmental Oceanographic Commission coordinated an evacuation exercise with two simulated earthquake scenarios off the coasts of Iran and Northern Sumatra. Several of the 24 active countries in the system—including India, Indonesia, Iran, and Pakistan—undertook community evacuations, which included 115,000 people. 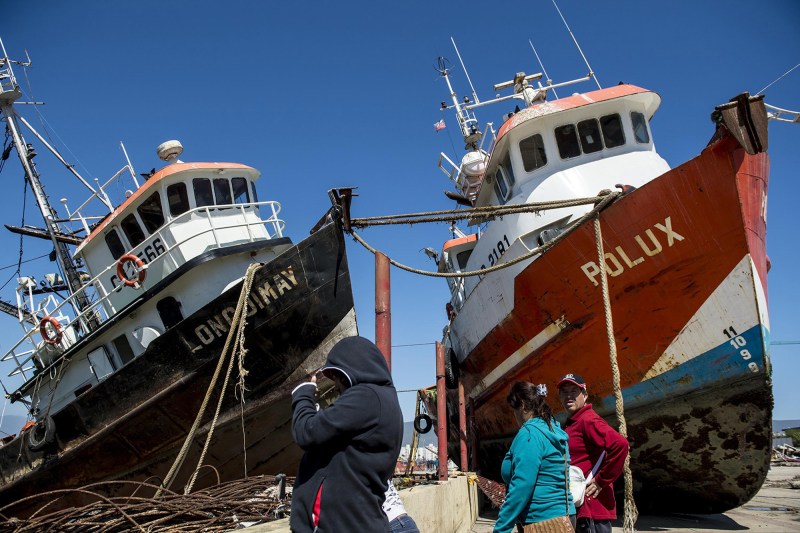 Fishing boats that ran aground after a tsunami are seen in the port of Coquimbo, north of Santiago, Chile, on Sept. 17, 2015. One million people were evacuated in Chile after an 8.3 magnitude quake struck offshore in the Pacific, triggering tsunami waves along its northern coast. (Martin Bernetti/AFP/Getty Images)

In the Pacific Ocean, as well as the Caribbean Sea to some extent, NOAA takes the lead, according to Arcas. The Pacific Tsunami Warning Center in Honolulu, established in 1949 after the 1946 Aleutian Island earthquake and tsunami, analyzes data and sends tsunami warnings to national centers and authorities, as well as regional centers, including those in Japan, China, New Zealand, Australia, Chile, Peru, and Colombia. From there, the information trickles down to emergency management systems at coastal community levels.

“Chile is the standard,” in terms of preparedness, according to Arcas. “That’s why our prototypes are sitting off their coast.” The prototypes are the newest-generation buoy systems, known as DART 4G. Chile hosts three of the five DART 4G buoys active globally. Before the fourth generation, if DART buoys were deployed too close to the source of a tsunami, high seismic noise wouldn’t allow the tsunami’s hydrodynamic signals to be heard. In the 4G system, an algorithm filters the seismic noise out, allowing the buoy to be placed over 80 percent closer and giving roughly 20 more minutes of warning.

In Chile, early warning systems including an alarm and a text message with the phrase “SHOA [Servicio Hidrográfico y Oceanográfico de la Armada] orders evacuation to a secure area,” are activated with earthquakes above a magnitude of 7. But it’s Japan that many experts consider the most prepared (and perhaps the most at risk), equipped with high sea walls and an early warning system for tsunamis generated by local earthquakes in addition to regional disasters. 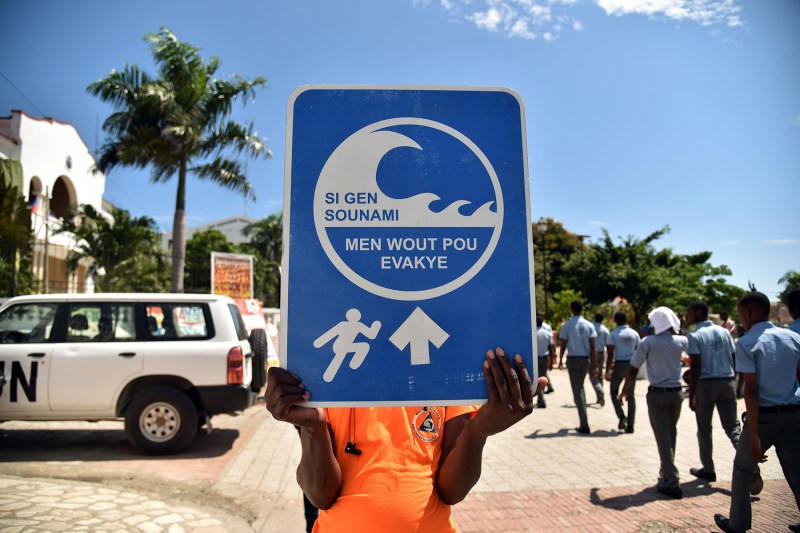 A man holds a tsunami evacuation route sign while people walk toward a security zone during an earthquake and tsunami emergency drill in the city of Cap-Haïtien, Haiti, on May 6, 2016. (Hector Retamal/AFP/Getty Images)

With 48 countries and territories participating, the region is addressing vulnerabilities due to population growth and increased tourism in coastal areas, according to UNESCO. In the Caribbean, the change in response capability since 2004 has been stark. “Every single seismic network has opened up the data that the center needs to make forecasts and issue those first alerts,” von Hillebrandt-Andrade said. All of the data from 80 sea level stations is shared, bringing the average wait for a warning in the Caribbean from 15 minutes to an average of less than five, often less than three. In addition, scientists and experts in the region convene high-level meetings to reach a consensus on which sources of earthquakes should be monitored, avoiding blind spots or overemphasis on one trench, according to von Hillebrandt-Andrade.

Evolution of tsunami warning systems and products by Eddie Bernard and Vasily Titov, published in 2015 in Philosophical Transactions, a mathematical, physical, and engineering sciences journal of the London-based Royal Society

Established by the Intergovernmental Oceanographic Commission Assembly in 2005 and coordinated by the commission and UNESCO, the Northeast Atlantic and Mediterranean system covers 39 countries. As in the other tsunami warning systems, several nations (France, Greece, Italy, Portugal, and Turkey) watch the data with an eye to regional impacts and send it to nations along Mediterranean coastlines. In Italy, the National Tsunami Warning System analyzes seismic data in real time and assesses the risk of tsunamis at sea or along the coast after an earthquake as well as contributing to the dissemination of alert messages. The Civil Protection Department then issues alert messages to reach the populations.

Similarly, in Portugal, where historical memory of the devastating Lisbon earthquake and tsunami of 1755 remains strong, the Portuguese Institute for Sea and Atmosphere, using hundreds of sensors along the Portuguese shoreline, can detect earthquakes in the region and pass on the data in order to alert those at risk within eight minutes. The Portuguese system is capable of alerting countries including Mauritania, Morocco, Ireland, the United Kingdom, and France.