Something’s going to have to give, and it will probably be the sanctions.

On Nov. 4, U.S. sanctions on Iranian oil exports will go back into force after they were suspended following the 2015 Iran nuclear deal. Less than a month before that deadline, Iran’s oil sales are already tanking. The United States would like to see them fall further. In July, U.S. Secretary of State Mike Pompeo laid down a marker when he spoke at an event for Iranian dissidents. “Our focus is to work with countries importing Iranian crude oil to get imports as close to zero as possible by November 4th,” he said, before repeating “zero” for emphasis.

The problem with the “maximum pressure” campaign is that it is running headlong into another of U.S. President Donald Trump’s objectives: keeping gasoline prices low. After sharp increases in oil prices in May and June, and then again in September, Trump took to Twitter multiple times to shout at OPEC. He repeated the same complaints at the United Nations in New York last month. “OPEC and OPEC nations are, as usual, ripping off the rest of the world, and I don’t like it,” he said in his address. “Nobody should like it. We defend many of these nations for nothing, and then they take advantage of us by giving us high oil prices. Not good.” His remarks came just as Brent crude prices hit a nearly four-year high at more than $80 per barrel.

Trump could well put a lot of the blame on himself. In 2011, the year prior to the implementation of painful international sanctions on Iran over its nuclear program, Iran exported 6 million barrels of oil per day, a figure that includes condensates. Sanctions cut that figure down to just over 1.4 million barrels a day by 2014. When those sanctions were lifted in 2016, Iran’s exports rebounded sharply, topping 8 million barrels per day in April 2018, the month before Trump withdrew from the nuclear accord and announced new sanctions. Since then, Iran’s oil exports have fallen sharply.

The decline in Iranian exports—about 800,000 fewer barrels of oil per day—has played a part in a significantly tightened oil market. (Venezuelan production has dipped, too, although that came as less of a surprise.) Oil prices are up about 10 percent since Trump withdrew from the Iran nuclear deal, and because oil is priced globally, the United States is not insulated from these increases. As a result, American motorists are paying more at the pump—about $2.80 nationally—than at almost any time in the past four years. 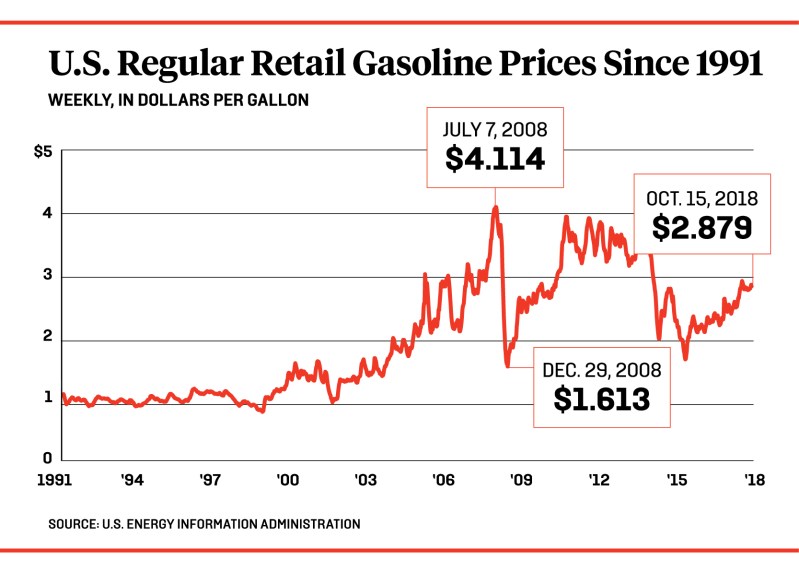 The more the United States tightens the screws on Iran, the harder it will be to prevent prices from rising further. However, there is quite a bit of disagreement over how low Iran’s oil exports could go.

The U.S. State Department has made significant progress in convincing other countries to reduce their imports from Iran—far more than what was thought possible when Trump scrapped the nuclear accord. South Korea and France have completely cut off oil imports from Iran, and Japan is almost there, having imported only 40,000 barrels per day in September, according to the International Energy Agency. Iran’s oil exports should continue to fall.

However, they won’t fall to zero. China and India have cut their purchases but still imported 430,000 and 600,000 barrels a day last month, respectively. And several Indian refiners have already booked orders from Iran for November, after the sanctions take effect. China, meanwhile, has repeatedly vowed not to abide by U.S. sanctions and will likely continue to import from Iran, albeit at lower levels than before. Outside of France, much of the rest of Europe, too, has continued to import Iranian oil. Over the next few weeks, those purchases are expected to dwindle, but European policymakers are setting up a “special purpose vehicle” to allow European refiners to continue to buy oil from Iran. It is unclear how effective this mechanism will be, but it could prevent Europe’s purchases from falling to zero. Meanwhile, Iran can also smuggle oil, heavily discount cargoes, trade in other currencies, and barter in oil-for-goods deals with willing partners. Tehran cannot avoid significant losses of oil exports, but it can keep exports of several hundred thousand barrels per day going. 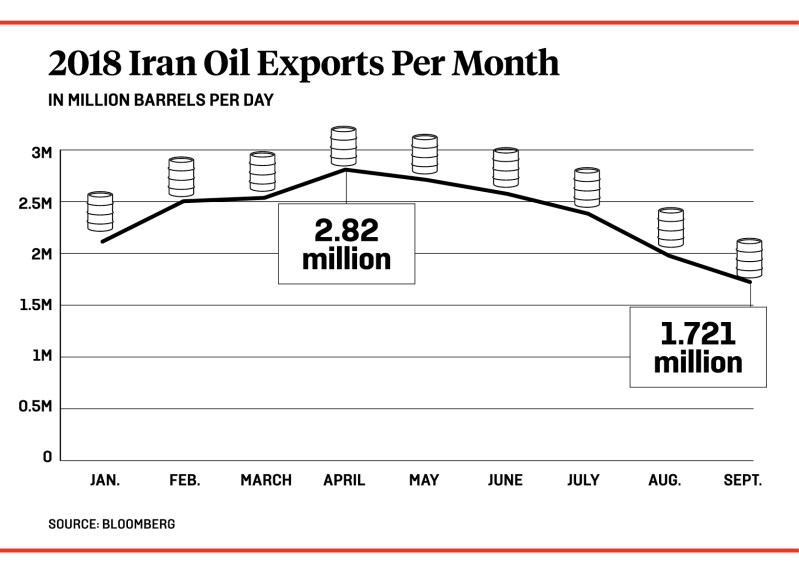 With Iran exporting oil at low levels, it might actually be the United States that ultimately pulls back from its aggressive posture. Trump administration officials have recently suggested that they are considering waivers for certain countries importing Iranian crude, a sign that the administration is feeling the pressure from higher energy prices. It could be that U.S. policymakers are realizing that the energy independence supposedly brought by soaring U.S. shale production was a mirage. It is true that net imports of crude have fallen sharply over the past decade as U.S. shale production has increased; in 2005, the United States depended on imports to meet 60 percent of its oil needs. That figure is now down to less than 15 percent. Nevertheless, U.S. motorists are still at the mercy of global oil prices. Higher shale output only lowers global prices insofar as it improves the global supply balance. And precisely because Iran sanctions have shrunk supplies, fuel prices across the world have climbed.

The United States may be one of the world’s largest oil producers, but it is not a swing producer. Its output comes from hundreds of individual privately owned oil companies, large and small. They all make unique business decisions and do not have the ability to bring extra supply online on short notice. As such, the United States doesn’t really have any spare capacity to offset a sudden tightening of the market.

Rather, Saudi Arabia’s spare capacity—its ability to turn oil production on or off at a moment’s notice—gives it outsized influence over global oil prices. In early October, the U.S. State Department accused OPEC of holding back 1.42 million barrels a day of spare capacity and encouraged the group to ramp up production. (Such pleas illustrate further the level of influence OPEC still maintains over energy prices, even as the United States continues to set new production records.)

In many ways, then, the U.S. pressure campaign on Tehran hinges on spare capacity from oil fields in the Saudi desert. But there’s the rub. Even optimistic assessments of Saudi Arabia’s spare capacity clock in at just under the 1.6 million barrels per day that Iran currently exports.

Even with Riyadh’s claims, if given the benefit of the doubt, pressing OPEC to burn through its spare capacity, as the Trump administration wants to do, is a curious objective. If OPEC spare capacity went down to negligible levels, oil markets would grow increasingly jittery. That would likely result in higher volatility, which would negate the benefit of bringing new oil supplies online. Because of that, it’s unlikely that OPEC would opt to take this route.

If oil prices are already causing the administration to squirm at $80 per barrel, as Trump’s tweets and demands that OPEC increase production suggest, it is not likely that it could stand for prices to go much higher.

At the end of the day, then, shutting down all of Iran’s oil exports is infeasible. The United States will either have to issue waivers to some top importers of Iranian crude or else tolerate some level of cheating. And if taking Iran’s oil exports down to zero is out of the cards, the window for pushing for regime change seems all but closed as well. In July, the administration seemed to be laying the early groundwork for war with Iran. Pompeo, in his address to Iranian dissidents, called the Iranian government deeply corrupt, illegitimate, and something that “resembles the mafia more than a government.” He described Iranian President Hassan Rouhani and Foreign Minister Mohammad Javad Zarif as “so-called moderates,” “wolves in sheep’s clothing,” and “violent Islamic revolutionaries with an anti-America, anti-West agenda.” He detailed the “maximum pressure” campaign to choke off the regime and support the “shoots of liberty” taking hold within Iran. He announced the launching of a Farsi-language TV channel so that Iranians “can know that America stands with them.”

On the same day, Trump tweeted in all caps: “Never, ever threaten the United States again or you will suffer consequences the likes of which few throughout history have ever suffered before.” Trump’s national security advisor, John Bolton, a longtime proponent of regime change in Tehran, echoed Trump’s comments, saying that “if Iran does anything at all to the negative, they will pay a price like few countries have ever paid before.”

However, just like the United States is limited in the amount of pressure it can put on other countries to limit oil imports from Iran, it cannot initiate a war with Iran without sending oil prices skyrocketing. Iran is still exporting well over 1 million barrels per day, and oil prices are already at uncomfortable levels. The administration’s willingness to countenance waivers ahead of the Nov. 4 deadline is proof that it recognizes the limits of its confrontational approach. Trump’s pursuit of maximum pressure is at odds with his desire for affordable energy. Eventually, he will have to back down.

Nick Cunningham is a journalist covering oil and gas, energy and environmental policy, and international politics.

Can the U.S. Make Oil Sanctions on Iran Work?

Given pushback from friends and foes, Trump’s goal of zero Iranian exports is still far off.

Trump Should Calm Tensions With Europe Over Iran Sanctions

Here’s how Washington and Brussels can come to a compromise.

The Road to Tehran Runs Through Oslo