BAGHDAD—The courtroom was silent—all eyes were on a woman, a Turkish schoolteacher in her early twenties, who stood in a wooden cage in the center of the room. Her husband, killed in an airstrike, was an accused member of the Islamic State. She was one of the hundreds of foreign women who crossed illegally into Iraq and Syria and would become known as the “ISIS brides.” And today was her moment of reckoning.

It wasn’t clear, however, whether she understood that. She had only a court-appointed translator and public defender, neither of whom offered a proper translation or defense. When the judge asked if she pleaded guilty or innocent to illegally crossing into Iraq—at no point did they ask if she joined or supported the Islamic State—she seemed unsure what to say.

“Guilty,” she answered, looking around in confusion, her little boy dressed in blue wailing in the cage with her. With that admission, she was sentenced to death by hanging. Her trial would last only a few minutes.

Over the past three years, U.S.-backed Iraqi forces have captured, killed, and detained thousands of Iraqis and foreigners with alleged Islamic State ties, ultimately driving the militant group and its predominantly male ranks from power in Mosul, Iraq’s second-largest city, in July 2017. But left behind are the thousands of women married to or associated with the fighters, their children, and a burning ethical question: What should be done with them? We know historically that women often lose agency during wartime, particularly in patriarchal societies where they already lack freedom of choice and movement. Are these women victims themselves, forced into life under militant rule, or perpetrators of and partners in violence who should be held accountable for violence that tore apart Iraq?

The fate of the wives of accused war criminals is not a new question for the international community. From the Nazis to Colombian guerrillas, peace and reconciliation processes have wrestled with the role of women in war crimes. It’s a critical issue for justice, gender equality, and for those hoping to lay the groundwork for future stability and peace in a postwar setting, in which the quest for truth and justice requires great nuance. History has shown that what happens to women—victims, combatants, and those in the grey area in between—reaps long-lasting and far-reaching consequences.

But none of the lessons learned seem to be playing out in Iraq right now—and the consequences for the future could be dire. It’s not just a human rights issue but also an issue of security, one that could either fuel the fires of militancy and extremist recruitment or help squash them.

Thousands of Iraqi women, many of them widows, and their children languish in bare-bones internally displaced person and detention camps, stripped of nearly all rights—like the right to return home, to acquire government identification that allows them to access state services, and to educate their children. They face sexual abuse and an indefinite future in squalid, dire conditions.

Others—500 or more foreign women who have hundreds of children with them in detention, or in orphanages—await shockingly speedy trials and final sentencing that could end in execution. Women, and rights groups, say they’re being collectively punished for their connections to brothers, husbands, cousins, and uncles accused of joining the Islamic State. 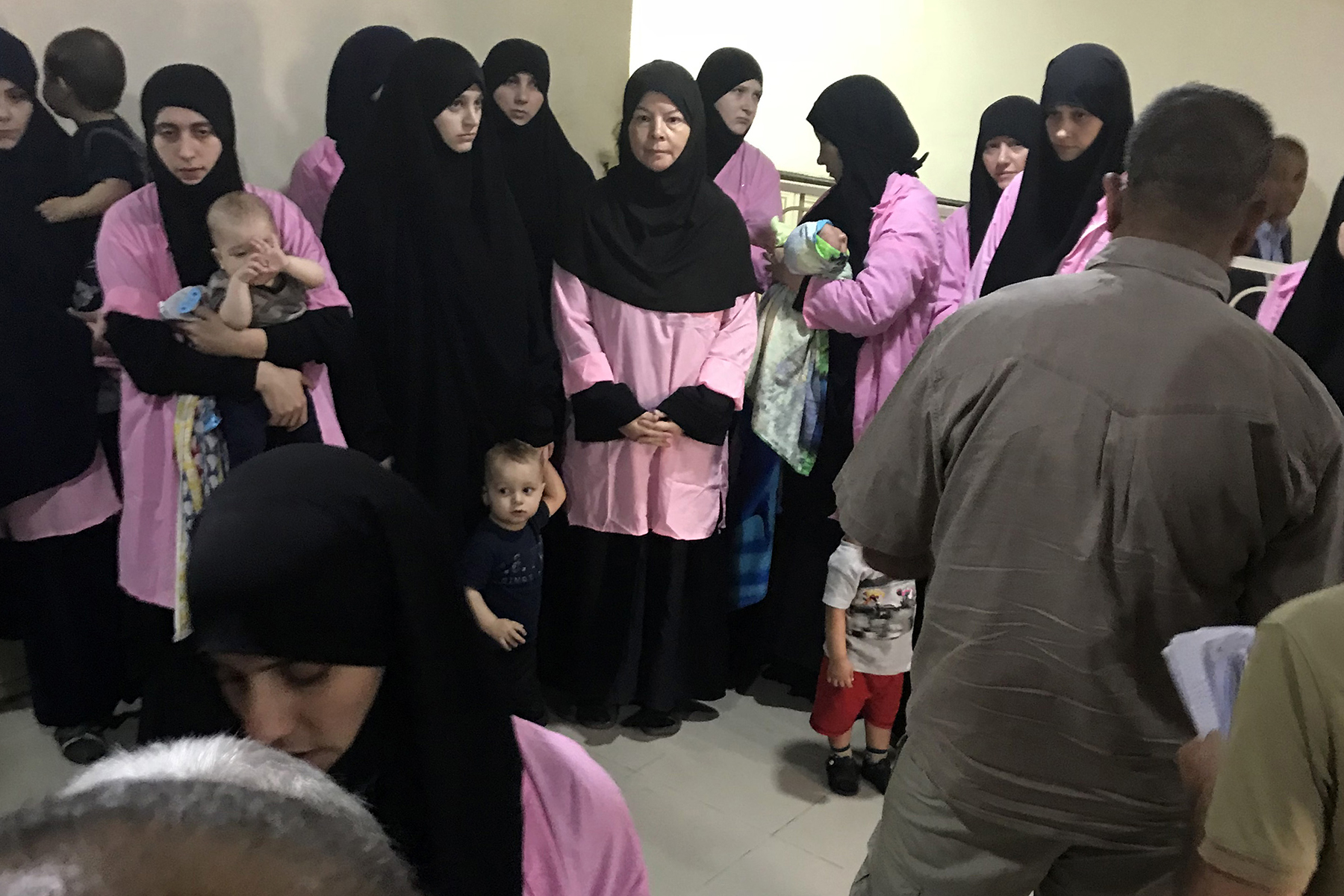 It’s this same collective punishment many Iraqis complained of during Iraq’s de-Baathification campaign, the same sweeping counterterrorism laws, mass arrests, and sectarian tensions that led to the Islamic State taking Mosul with relative ease in 2014, when many Sunni residents welcomed the militant group as the lesser of two evils compared to government forces. “International law only allows you to punish someone for being responsible for a crime after a fair trial,” said Belkis Wille, a senior Iraq researcher for Human Rights Watch. “You can’t punish someone because they are a family member or a friend. If you do so, that becomes a war crime.”

But Iraqis say these women are guilty. The foreigners who joined the Islamic State are considered to be some of the most fervent followers, and their role in killing and terrorizing thousands of Iraqis is met with unbridled fury. While some Iraqis say they have sympathy for the women who claim they were forced, or could not escape, others say the women are as equally to blame as the men—they took care of Islamic State fighters and bore them children who were to be trained as fighters, accepted the militant group’s money, and supported the hard-line ideology online and in communities. Men and women accused by Iraqi courts of supporting a terrorist organization like the Islamic State, even if they did not personally kill or commit acts of terrorism, can still be sentenced to death.

“They didn’t come for tourism,” the Iraqi judge and judiciary spokesman Abdul-Sattar al-Birqdar told one of us in an interview earlier this year. Indeed, while some women of the Islamic State were forced into their role, others embraced it, serving as “morality” police and abusing Yazidi women and girls sexually enslaved by the Islamic State.

Birqdar has defended Iraq’s means of justice, saying the trials are fully in line with international law, take into account evidence, and successfully weed out the innocent from the guilty—though rights groups have slammed the trials as unlawful. The trials also serve as a future deterrence, he says, for anyone—man or woman—who will consider joining terrorist groups in Iraq. “Our job isn’t just to punish the criminals but to provide justice for the victims,” he said. “To provide justice to these people is more important than the criminals who might kill tons of people in one second.”

The sentencings are being monitored by the International Committee of the Red Cross in Iraq, the main organization assisting detained foreign women. But while the organization can encourage compliance with international law, it can’t enforce detainee rights. Meanwhile, even though U.S. firepower helped drive the Islamic State from Mosul, the United States has largely steered clear of anything related to the detention, prosecution and punishment of accused Islamic State supporters and their families. Countries such as France and Turkey have refused to take back citizens, including women, accused of joining or supporting the Islamic State in Iraq, instead saying they should face justice in Iraq. Others, including Russia, have repatriated dozens of women and their children from Iraq and Syria.

This next chapter, what happens after the Islamic State, is a part of the conflict that history indicates the United States and the international community should not ignore.

Reintegration is essential for the “healing of the country,” said Swanee Hunt, the director of the Women and Public Policy Program at Harvard University’s Kennedy School of Government and the chair of Inclusive Security. Hunt has spent the last three decades witnessing women’s role in peace and reconciliation processes, from Rwanda to Iraq. “They’re part of the community,” she says of the Iraqi women now caught in legal limbo. “They know the other mothers. They know which teen boys have guns under the mattresses.”

But there is little nuanced debate surrounding the issue of what to do with these women and their children. Whether or not they bear culpability as collaborators seems to be irrelevant in courtrooms and detention camps across Iraq—collective punishment is doled out regardless of hard evidence.

The collective punishment is hardly surprising. Historically, there have been few circumstances in which women, most notably wives, connected to militant groups or accused of extremist ties have been fairly tried, or tried at all. Women represent a very small proportion of those tried after conflict—the few who have faced international tribunals or hybrid courts have been tried for their actions as individuals rather than as wives of perpetrators, said Marie O’Reilly, a researcher on gender and security. But that is not to suggest that such women typically escape punishment.

After World War II, high-ranking Nazi wives went largely unpunished. Only several dozen women—many of them Nazi guards who worked in and committed atrocities at the Buchenwald and Ravensbrück concentration camps—were put on trial and sentenced to death or life in prison. Many German women, however, with perceived or actual Nazi ties were collectively, and often violently, punished without due process. When Soviet forces entered Germany in 1945, they gang raped thousands of women, according to diary entries and reports from the time. In France and across Western Europe, women accused of “collaboration horizontale”—essentially, having sexual relations with Nazis—were ritually stripped, abused, and had their heads shaved in public. Some were sex workers, others were desperate, single mothers who exchanged sex with Nazi soldiers in order to feed their children. Last week, Norway offered a formal apology to thousands of women who were arrested and stripped of citizenship for alleged wartime relations with German men, whose offspring had been shunned and labeled the “children of shame.” 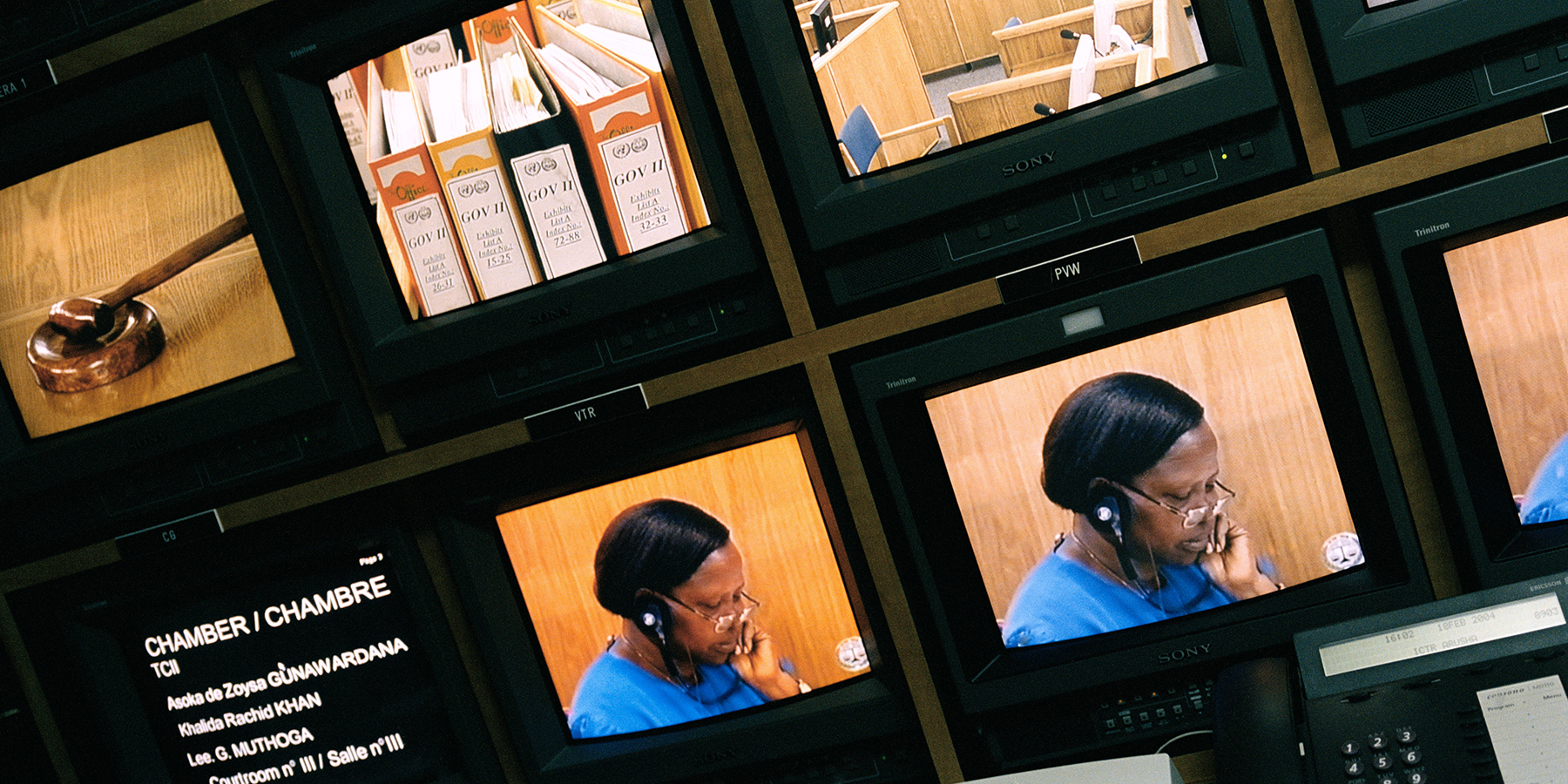 During the Rwandan genocide, there were also retributive killings and rapes of women, but there was never an effort to specifically punish the wives of war criminals. But many lower-level perpetrators were dealt with in community-based Gacaca courts or truth and reconciliation commissions that typically prioritized communal healing. The International Criminal Tribunal for Rwanda also found Pauline Nyiramasuhuko, the former minister for family welfare and the advancement of women, guilty of genocide and rape in during the bloody 1994 genocide marked by mass sexual violence. Meanwhile, in Bosnia, the International Criminal Tribunal for the Former Yugoslavia convicted former Bosnian Serb President Biljana Plavsic, a woman, of persecution as a crime against humanity. Local courts have convicted a handful of women, but not the wives of perpetrators.

Complicating matters further in Iraq is that many women facing prosecution and collective punishment say they were tricked into joining the Islamic State or simply could not leave their husbands as they and their families depended on them monetarily and for security. As the Islamic State maintained its grip on cities such as Mosul and set up checkpoints to ensure people couldn’t leave easily, trying to escape was seen as a potential death sentence.

Courts in Sierra Leone took the opposite approach than those in Iraq in dealing with such ambiguities, O’Reilly said. “The Special Court recognized the abduction of women and girls and their assignment to male combatants for forced labor and sexual slavery as a crime against humanity,” she explained. “Senior male leaders were prosecuted for treating their ‘bush wives’ so inhumanely. The Extraordinary Chambers in Cambodia also considered forced marriage as a crime against humanity.”

As for the Turkish school teacher condemned to death, she awaits her final fate in a Baghdad jail with her young son. If she is executed, her son will spend his childhood in a cash-strapped orphanage, many of which struggle to provide basics for thousands of other children. What will happen to them both will have long-lasting implications far beyond the confines of their prison cell.

History has shown that peace and stability are often impossible unless a fair process of justice and reintegration is implemented after war. This process must include women, both those carrying out justice and those facing the justice system for alleged crimes. Iraq’s future depends on it.

Sophia Jones is a senior editor with the Fuller Project for International Reporting covering gender and global security. Twitter: @sophia_mjones