FP’s Guide to the Brazilian Election

Ten things to read or listen to before the vote.

This Sunday, millions of Brazilians will head to the polls to take part in the second round of their country’s general elections. Their choice is between Fernando Haddad—the candidate from the left-wing Workers’ Party and stand-in for Luiz Inácio Lula da Silva, the former president who was imprisoned and disqualified from running earlier this year—and Jair Bolsonaro, the controversial right-wing legislator whose political incorrectness has earned him frequent comparisons to U.S. President Donald Trump.

Wondering what to make of it all? We’ve collected our top reads on how Brazil got here and what is at stake.

For Bolsonaro, the best comparison might not be Trump but rather Goebbels, writes Federico Finchelstein, the author of From Fascism to Populism in History. Bolsonaro’s “vocabulary recalls the rhetoric behind Nazi policies of persecution and victimization,” Finchelstein writes, pointing to the way the candidate has argued that it is Brazil’s left that has actually become increasingly fascistic and has hinted about the possibility of a coup if he loses at the polls. The author concludes with a warning: “The more anti-system and violent Nazi extremism became, the more public support Hitler generated. In a country where support for authoritarianism is on the rise and 53 percent of Brazilians, according to a recent poll, see police as ‘warriors of God whose task is to impose order,’ such views catch on.”

Despite his many prejudiced outbursts—he’s called refugees the “scum of humanity,” hinted that his political foes should be executed, and said that he wouldn’t rape a female congressman because she’s “not worthy” of it—Bolsonaro currently seems headed for an easy victory, with polls giving him as high as 57 percent of the vote. Part of the reason, according to the Brazilian academic Eduardo Mello, is Bolsonaro’s stabbing earlier this year; Mello argues that the violence against the far-right figure reinforced for his supporters the message that Brasília needs to be ruthless in addressing the country’s law-and-order problems.

But it isn’t just Brazilians on the far-right opting for Bolsonaro. “Millions of voters who would have normally cast their ballots in favor of centrist candidates are planning to vote for him this time around,” writes Matias Spektor, an associate professor at the Fundação Getulio Vargas in São Paulo. They’re drawn in because of his conservative values (evangelicals make up an increasing percentage of the Brazilian electorate), his hard line on crime and corruption, and the rampant fake news that has dominated this election cycle.

The same goes for many women voters, as the journalist Ciara Long points out. In fact, despite his sexist comments, “women are as likely to support him as their male counterparts.” Some of them may believe that his rhetoric is mostly bluster. Others may think that he will make good on his words but that such an outcome would still be better than the alternative: continued rule by the ineffectual and corrupt Workers’ Party. To be sure, there are still many women on the other side of the equation who have vowed never to support Bolsonaro, but it doesn’t look like they will be able to prevent his rise to Brazil’s top job.

Two other groups that have lined up behind the candidate are the business community and the military. For folks in the business world, his economic program, which includes privatization, pension reform, and lowering taxes, is appealing, writes Foreign Policy’s Keith Johnson. But their support is “also connected with what Bolsonaro stands against: the years of perceived economic mismanagement by the Workers’ Party that led to spiraling debt, sluggish growth, and high unemployment.”

For the military, Bolsonaro, a former army man, represents a chance for the institution to reassert itself into civilian politics. As Michael Albertus of the University of Chicago points out, the candidate has promised to staff his cabinet with military figures, and he “has made law enforcement, backed by military might and carte blanche policing, the main plank of his political platform.” 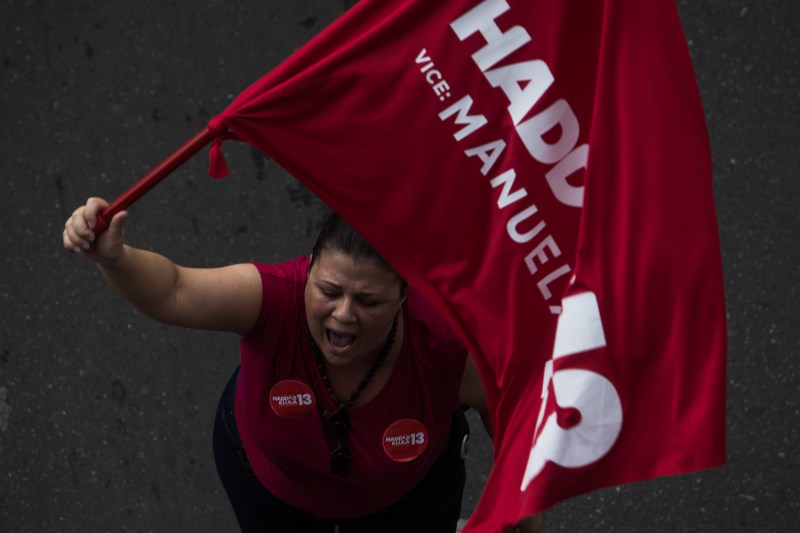 The rise of Brazil’s far-right begs the question of what happened to the country’s center and left. Columbia University’s Christopher Sabatini argues that the breakdown of traditional—and more centrist—parties owes itself to years of corruption scandals and poor governance, and it has opened the floodgates to small radical movements.

That’s a sentiment echoed by Antônio Sampaio, a research associate at the International Institute for Strategic Studies, who traces the downfall of Brazil’s Workers’ Party under the tenure of Lula’s successor, Dilma Rousseff. Her economic mismanagement and association with the Operation Car Wash scandal—topped by her eventual impeachment—he explains, destroyed the reputation of the party, which was once seen as the “best hope for the country’s salvation.”

In the end, writes José R. Cárdenas, who formerly served in the U.S. Agency for International Development, “millions of voters who placed their faith in the system only to see their needs and interests unaddressed while politicians feathered their nests are embracing populism of various varieties.” And no one should fault them “for their expectations—or their desperate search for solutions.”

It is unlikely, of course, that most of Bolsonaro’s solutions will work, explains Brian Winter, the editor in chief of Americas Quarterly, on this week’s edition of First Person, the Foreign Policy podcast. But if he wins the presidency this weekend with a large mandate, “he will have tremendous power to mold the country in his image.” And that will mean a strong alliance with U.S. President Donald Trump, pension reform, harsher policing, and more violence to come.

The Military Returns to Brazilian Politics

As Bolsonaro takes the lead, the future looks dim for democracy in Brasília.

Voters are manifesting their profound unhappiness with the status quo. Jair Bolsonaro is the result.