Two Eurocrats and Their Trans-Atlantic Quest to Woo Idaho

Ambassadors try to understand more about Trump’s America by seeing it for themselves.

BOISE, Idaho—Henne Schuwer’s job is to understand Washington, D.C. Which is how he found himself in Boise, Idaho, last month.

Schuwer, a towering figure with a bushy beard and a wry sense of humor, is the Dutch ambassador to the United States. His bosses at home rely on him to report on the vagaries of U.S. politics, an assignment that has become vastly more complicated in the era of Donald Trump.

BOISE, Idaho—Henne Schuwer’s job is to understand Washington, D.C. Which is how he found himself in Boise, Idaho, last month.

Schuwer, a towering figure with a bushy beard and a wry sense of humor, is the Dutch ambassador to the United States. His bosses at home rely on him to report on the vagaries of U.S. politics, an assignment that has become vastly more complicated in the era of Donald Trump.

So when a Washington think tank called recently and offered a trip to Idaho—a state on the outer edge of the American heartland whose residents voted solidly for Trump—Schuwer and another European ambassador, Emily Haber of Germany, both packed their bags.

“We want to learn from people in Idaho: What do you think is happening in the United States?” Schuwer explained during a stop at Boise State University in an interview with a student television station.

“There are, I think, many people in Washington—and I was in Washington at the time—who were taken by surprise [by Trump’s election],” he said. “And I think that part of the answer to the question why … is lying outside the Beltway.”

Both ambassadors are career diplomats with decades of experience. But Trump’s nearly two years in office have produced unnerving and bewildering policies for some Europeans—on everything from trade to NATO to the coddling of Russian President Vladimir Putin.

Ambassadors often travel around in the countries where they are stationed. But with another election coming up—the congressional midterms on Nov. 6—the imperative to understand frenetic political trend lines in the United States seems even more important for foreign diplomats.

“You need to travel. You need to speak to as many people as you possibly can to understand what things are changing, why they’re changing,” said Haber, who is just a few months into her posting in Washington.

Over the course of a day and a half, the ambassadors met a cross-section of Idahoans: business owners, local politicians, students, and ordinary residents. On public panels and in private meetings, they pitched the importance of trans-Atlantic relations. After they spoke to about 100 people in a hall on campus, language students rushed them to try out their German and Dutch. Others asked for selfies.

“We’re pretty secluded, so it’s pretty rare to get big international names coming here,” said Isabella Eck, a senior at the university who grew up in Boise. “I’m not sure if it’s a great use of their time, but for us it’s exciting to talk with them.” 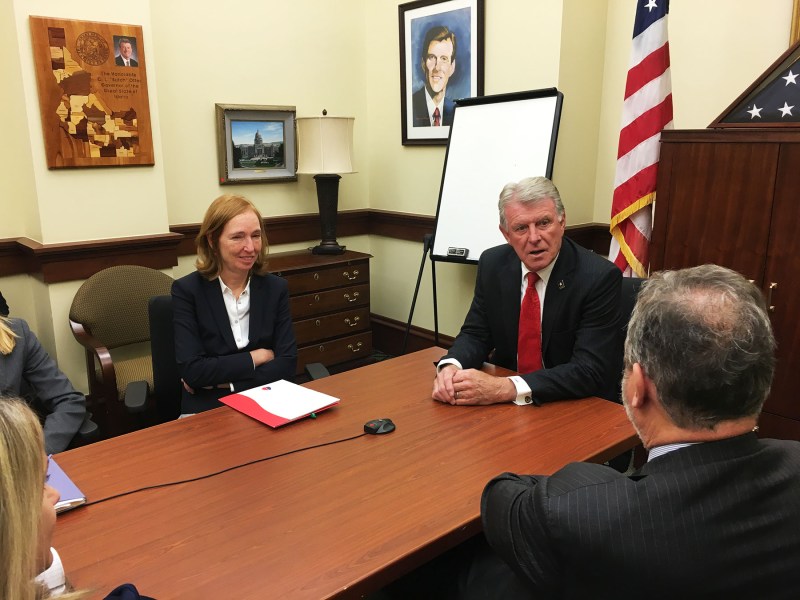 The idea of taking ambassadors outside the proverbial Beltway and to parts of the United States that voted for Trump was the brainchild of analysts at the Center for a New American Security (CNAS).

Though CNAS is a bipartisan think tank, many of its Democratic experts were deeply involved in Hillary Clinton’s 2016 presidential campaign and expected to take up senior administration posts on her victory.

Trump’s election came as a shock. It prompted a kind of political soul-searching across Washington institutions and produced several programs aimed at understanding—and explaining—how Americans opted for a candidate with no political experience and a vision of the United States as anti-immigrant and largely isolationist.

“The question was, do we want to continue to sit in Washington and talk to ourselves and the same 50 people over and over again at roundtables, or do we want to go out and engage other Americans?” said Rachel Rizzo, a CNAS fellow who helps manage the project. “It’s more about listening than teaching … and we’re still learning.”

Idaho, a deep-red state that has voted just once for a Democratic presidential nominee since 1952, seemed like a natural destination (though Boise is a speck of blue in a sea of red—where many of the state’s minority Democrat voters reside).

In meeting after meeting, the ambassadors were reminded that U.S.-European relations, the topic that drives their day-to-day work in Washington, barely factored in the minds of Idahoans.

Haber, a historian by background and a career diplomat, is no stranger to difficult assignments. She oversaw migration and security issues for Germany’s Federal Ministry of the Interior at the height of Europe’s refugee crisis. But her new role is a unique challenge: balancing relations with a historic ally whose president has railed against Berlin for what he sees as laggard NATO defense spending and unfair trade practices. Those tirades have forced Haber to walk a more precarious diplomatic tightrope than many of her European counterparts—choosing her words on U.S.-German relations carefully even when she is more than 2,000 miles from Washington. 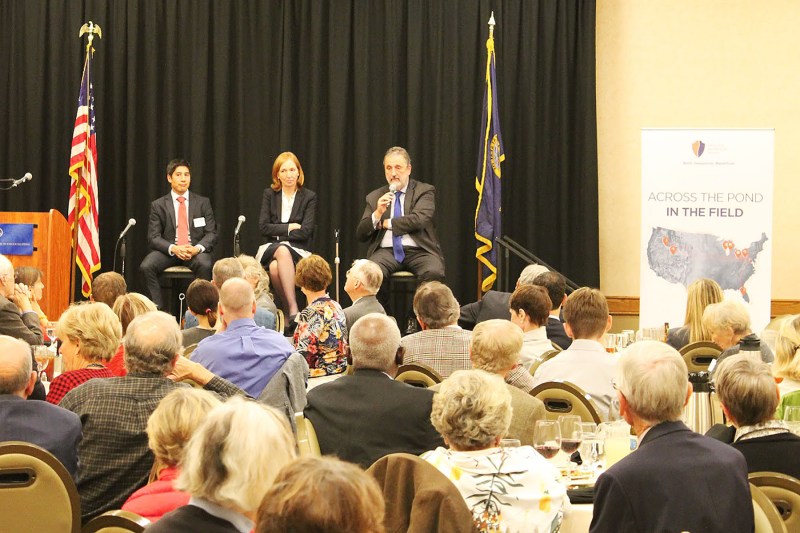 The ambassadors did get an earful on trade and the uncertainties brought on by tariffs—a painful issue for many Idaho businesses.

A study by Fitch Ratings in July found that Idaho was the most vulnerable state in the country to Trump’s escalating trade war with China. Idaho has an extensive agricultural sector and a growing semiconductor industry, both of which are heavily reliant on Asian exports to help fuel the state’s booming economy.

Jennifer Verdon, the international business manager at Idaho’s Commerce Department, said the state’s businesses were “definitely worried.” International investors who were eyeing business opportunities or investments in Idaho are signaling that they could take their money elsewhere if trade wars escalate or Trump eyes new tariffs.

“Some are losing customers. Some are worried they will lose customers because their customers are talking to them [saying], ‘Hey, other countries are knocking at our door,’” Verdon said.

Though the signing of the new U.S.-Mexico-Canada trade deal came as a relief to many in Idaho, the pressure on farmers isn’t expected to let up anytime soon. A recent study by the U.S. Department of Agriculture’s Economic Research Service forecasted that net farm income in 2018 would be 13 percent lower than in 2017.

“I’m still laboring under the belief that those are not going to be long-term tariffs,” said Idaho Gov. Butch Otter in an interview.

Otter, a gregarious cowboy-turned-politician, hosted the ambassadors in his office at the state capitol building for a discussion on how Washington’s foreign-policy priorities impacted Idaho. (At the doorway, guests were greeted by a taxidermic otter holding an American flag and an Idaho license plate that said “otter.”)

After the meeting, he listed the way long-term tariffs harmed his state. But Otter, a veteran politician who outspokenly supports Trump, refrained from criticizing the president.

“It’s put us in industrial, in construction purgatory,” he said. “We know what we want to do. The question is, can we get the materials?”

Haber and Schuwer, in true diplomatic form, emphasized in almost every discussion the things Europe and the United States had to gain from trans-Atlantic cooperation.

“What binds us here in Idaho is potatoes,” Schuwer said in his interview with the university television program. “We have a big potato industry, you have a big potato industry, but you know what, let’s see what we can do together.” (A Netherlands-based company, NewCold, just invested $90 million in a new cold storage warehouse in southern Idaho for agricultural products.)

“Boise is a very fast-growing town. We have fast-growing towns in Germany, too. I think it’s interesting to just compare notes. What are the challenges? How to deal with them? How to go forward?” said Haber, the German ambassador. “So that’s something we discuss … with Boise.”

Andrea Kendall-Taylor, who now runs the CNAS program on trans-Atlantic relations (and who previously served as a Russia analyst with the CIA and the National Intelligence Council), said she worried about how voters in Idaho and other states barely registered issues such as cooperation with Europe or NATO.

“If you have a president who is not necessarily responsive to a lot of the advice or insights he’s given from places like the State Department or intelligence community, then the public environment seems more important and salient now,” she said.

But if voters across the country don’t care about Europe or NATO, “it’s hard to see where the constraints or guardrails on foreign policy are,” Kendall-Taylor said.

NEW FOR SUBSCRIBERS: Want to read more on this topic or region? Click + to receive email alerts when new stories are published on Foreign & Public Diplomacy, Europe

Biden Could Midwife a New Iraq