Northern Iraq May Be Free, but the South Is Seething

The world has focused on rebuilding the country’s north after defeating the Islamic State while ignoring festering resentment and poverty in Basra.

BASRA, Iraq—Recent violent protests in the southern Iraqi city of Basra have brought to light years of suffering by Iraqis in what is known as the economic capital of Iraq due to its vast oil reserves and deep-sea port access connecting the country to the international market. Basra, a predominantly Shiite city, also has a significant minority population, including black Iraqis and Christians. It is Iraq’s second-largest city and has developed a reputation for fostering some of Iraq’s greatest artists. During the first Gulf War, the Iraqi military used Basra as a route for the Kuwait invasion; ironically, a decade later, U.S.-led forces used it as a path toward Baghdad during the 2003 invasion.

The current crisis in Basra is not a recent development. It stems from years of inattention from both the international community and the Iraqi government. Increased civil unrest in the region has been exacerbated by the government’s focus on defeating the Islamic State in northern Iraq and unequal distribution of resources, making the current situation both expected and preventable. Basra’s once glorious canals, winding through a city previously known as the Venice of the Middle East, are now open-air sewers.

Following successful military operations against the Islamic State, most of the international focus has been on celebrating the liberation of northern Iraq and reconstruction of these areas. With most national and international attention focused on reconciling Iraq’s diverse communities in these liberated areas, Iraq’s predominantly Shiite southern cities have been neglected and their relative stability taken for granted.

Demonstrations and ensuing clashes with government security forces throughout this summer led to 27 deaths by the end of September, as well as the unsolved assassination of the women’s rights and anti-corruption activist Soad al-Ali. These protests, reflecting Iraqi anger about government corruption, also highlighted the lack of job opportunities and poor public services in the southern city. The protests not only targeted Iraqi officials but also foreign powers for their perceived role in supporting ineffective kleptocratic elites, with attacks on both the U.S. and Iranian consulates in Basra.

More than 80 percent of Iraq’s total GDP comes from the oil-rich area around Basra, which, being Iraq’s only province with coastal access, is also the country’s only port for exporting oil by sea. Despite the fact that the vast majority of Iraq’s oil resources are located in Basra province, the budget allocated for the region by the central government doesn’t reflect that wealth.

Indeed, the Iraqi government and the international community have neglected the region while disproportionately focusing development assistance in northern Iraq. The south’s security situation is deteriorating, and poverty levels are rising as a result. This is particularly worrying because many young southerners who fought to defeat the Islamic State are now destitute. 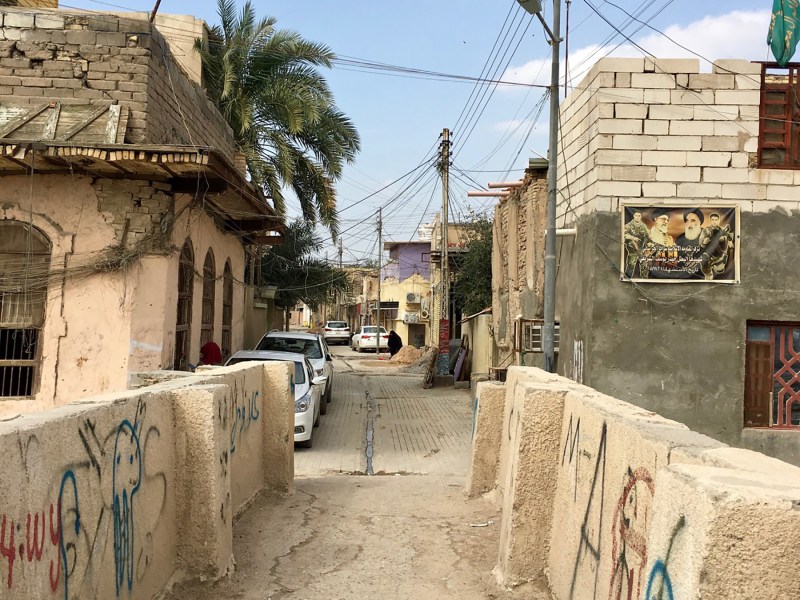 The Old City suburb of Basra (Al-Basra al-Qadima), Iraq, seen on March 1, is a residential area home to many cultural institutions such as Basra’s writing and arts clubs. The neighborhood was one of the wealthier parts of Basra but has fallen into disrepair following lack of investment after the 2003 war. (Ahmed Twaij for Foreign Policy)

The rise of the Islamic State in Iraq temporarily served as a uniting force, with many Iraqis in the south concerned by the threat posed by the terrorist group. This concern famously triggered the call for volunteer fighters by Grand Ayatollah Ali al-Sistani, Iraq’s leading Shiite cleric—a call answered principally by the predominantly Shiite youths of Iraq’s southern cities, who made up the majority of the Popular Mobilization Forces (PMF).

These heavily armed, trained, and experienced fighters are now returning to their home cities in southern Iraq, including Basra, to face deprivation. Confounded by international and local calls for disarmament, demobilization, and reintegration, these former fighters, having risked their lives to fight the Islamic State, are now being left jobless and sometimes homeless as Iraq’s debilitated economy is unable to continue providing salaries for an expanding security sector. Their situation threatens ongoing stability in Iraq. And their grievances are aggravated by the fact that reconstruction and redevelopment funds are being directed only toward the land that they risked their lives to liberate.

Iraq’s oil-rich southern province is pulling away from Baghdad's central government. And it's not alone.

Having won the war, will the United States end up yet again squandering the peace?

Elephants in the Room |
John Hannah

The former militia leader who once terrorized U.S. forces has reinvented himself as an Iraqi nationalist and a pragmatist.

Repeated mistakes in southern Iraq could result in increased dependency on Iran as calls for independence in Basra persist. The disenfranchisement of Basra’s citizens by the current Iraqi government has exacerbated the historical marginalization of Basra’s Shiite-majority community by Saddam Hussein’s pro-Sunni Baath Party, including the violent suppression of the 1991 anti-government uprising, from which mass graves continue to be discovered.

Since 2003, Baghdad’s recurrent failures to maintain public services—such as health care, job opportunities, and access to clean water and sanitation—has caused increased demands for both decentralization and greater autonomy when it comes to public spending. Ineffective decentralization efforts, coupled with persistent false promises, has ushered youth-led activists to support independence movements, such as the Assembly of the Sons of Basra, with protesters frequently waving the flag of an independent Basra.

Since 2014, the U.S. government has provided more than $1.7 billion in humanitarian assistance to support the nearly 6 million internally displaced persons (IDPs) in Iraq. The U.S. government has since pledged more funds to promote IDP returns to these war-stricken areas of northern Iraq. However, to promote nationwide stability, this partnership must include support across all of Iraq. Between 2016 and 2017, the U.S. Defense Department, through the Iraq Train and Equip Fund, provided $2.7 billion worth of assistance toward training Iraqi security forces for the campaign against the Islamic State, widening the security gap between north and south after Iraqi government troops were withdrawn from Basra and moved to the front lines in northern cities such as Mosul, Tal Afar, and Tikrit.

With the Iraqi security forces already debilitated following the 2003 war, the power vacuum allowed many spaces to be occupied by southern Iraq’s historic tribal entities that have exploited citizens through intimidation, blood money, and revenge attacks, causing ongoing violence in many neighborhoods across Basra. 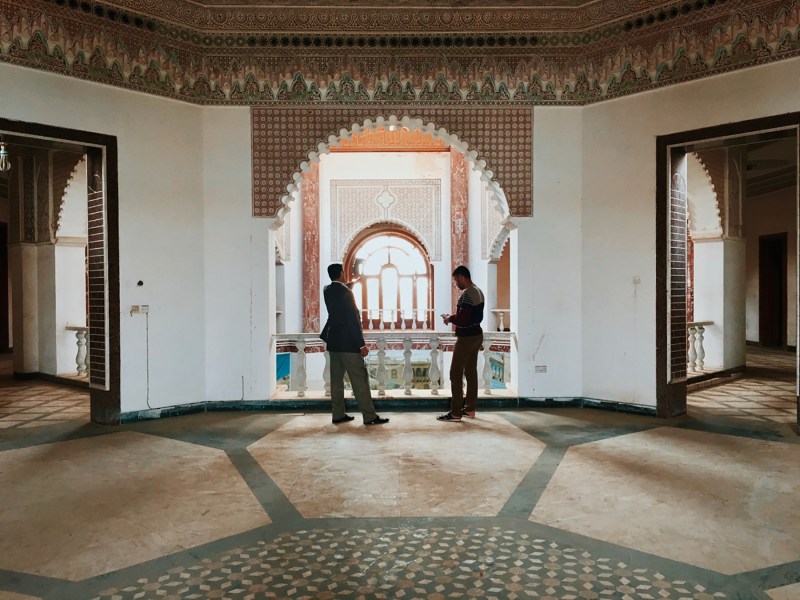 A former palace of Saddam Hussein on Corniche Road in Basra overlooking the river is being converted into a museum on March 1. Until recently, the area was off limits to civilians. (Ahmed Twaij for Foreign Policy)

Unresolved tribal disputes in Basra frequently spill into violent clashes, transforming some residential areas into conflict zones. Each time a tribal member is killed, a revenge killing is threatened in retaliation. Local security forces rarely intervene in these tribal altercations and often abandon these areas completely due to a lack of adequately armed forces.

Former Prime Minister Haider al-Abadi sent in the Iraqi Army and Federal Police to bring security in the wake of the tribal wars. But such military efforts are short-term solutions, as shown by repeated violent clashes in Basra since February. This shortsightedness plagues Iraqi politics.

Stabilization in Iraq has too frequently been addressed through piecemeal processes with activities treated with Band-Aid solutions, rather than addressing the underlying, long-standing grievances. One of the primary concerns fueling the protests in Basra was the lack of access to clean water, and although a USAID-funded program worth $750,000 will help, it is not enough for a city with a population of more than 2.5 million.

The underlying grievances—such as ineffective governance, pervasive government corruption, and a collapsing economy that resulted in the Iraqi government being unable to provide access to clean water—persist and could lead to further outbursts of violence in the near future, given the lack of security and rule of law.

Across Iraq, nearly 10 percent of the population lives in informal housing, ranging from shacks built from cinder blocks to tents in camps, with a fifth of them in Basra. Poor development and a lack of security—coupled with rising unemployment, tribal feuds, and returning PMF fighters—are all contributing toward ongoing grievances in Basra.

For lasting stability in Iraq, local and international reconciliation and rehabilitation efforts must also engage the south. Equal distribution of public funding, including holding the government accountable for the high degree of corruption, which has ruined public services, is essential. Although the victory against the Islamic State was declared in December 2017, lasting stability in Iraq is far from guaranteed.

Ahmed Twaij is an independent Middle East analyst and an advisor to the Iraqi nongovernmental organization Sanad for Peacebuilding. He is also a photojournalist and has worked with a number of international humanitarian and human rights organizations. Twitter: @twaiji

Iraq’s oil-rich southern province is pulling away from Baghdad's central government. And it's not alone.

Having won the war, will the United States end up yet again squandering the peace?

Elephants in the Room |
John Hannah

The former militia leader who once terrorized U.S. forces has reinvented himself as an Iraqi nationalist and a pragmatist.

Putin Is Planning a Partial Retirement

Anatomy of an Accidental Shootdown