ISIS May Be Gone, But Iraq’s Yazidis Are Still Suffering

The defeat of the Islamic State has created a power vacuum in the northern Iraqi town of Sinjar, leaving the Yazidi minority at the mercy of competing militias.

SINJAR, Iraq—Iraq’s strategically located town of Sinjar, now empty of civilians and devoid of life, lies buried beneath rubble. Although it was liberated from the Islamic State three years ago, the city remains in ruins—and has become rife with proxy militias vying for regional control.

Situated about 20 miles from the Syrian border, the town lies south of the Sinjar Mountains, a range that has always held geographic importance. Former Iraqi dictator Saddam Hussein reportedly used the mountains, which have a high point of 4,800 feet, to launch missiles into Israel during the Gulf War in the 1990s.

In recent years, Sinjar, home to the Yazidis, an ethno-religious minority, was the site of an Islamic State-led genocidal campaign. On Aug. 3, 2014, the terrorist group mercilessly attacked the town, slaughtering thousands of civilians and abducting women and girls who were then taken to Syria and sold or given as sex slaves to Islamic State fighters. Those who could make it sought refuge atop Sinjar’s rugged mountains. While under the jihadi group’s control, Sinjar provided a land corridor and supply route linking Islamic State strongholds in Syria and Iraq.

Since Sinjar’s liberation in late 2015, a slew of militias have poured in, creating a leadership vacuum that threatens the region’s stability. “Despite having been freed from ISIS presence … the region de facto remains an occupied district where competing Iraqi and foreign agendas play out by coopting Yazidis into rival armed groups,” Maria Fantappie, the senior advisor on Iraq at the International Crisis Group, told Foreign Policy. The continued presence of groups in the area is preventing reconstruction, demining, and the safe return of Yazidis to their homes, she added.

Four factions currently occupy Sinjar and its surrounding areas, none of which has full control: Iraqi government forces, the predominantly Syrian Kurdish People’s Protection Units; the Popular Mobilization Units (PMU), an Iraqi government-sanctioned paramilitary force backed by Iran; and the Ezidxan Protection Force, a local Yazidi militia of 3,000 troops. Flags change at each checkpoint in and around the town as each party attempts to assert dominance. 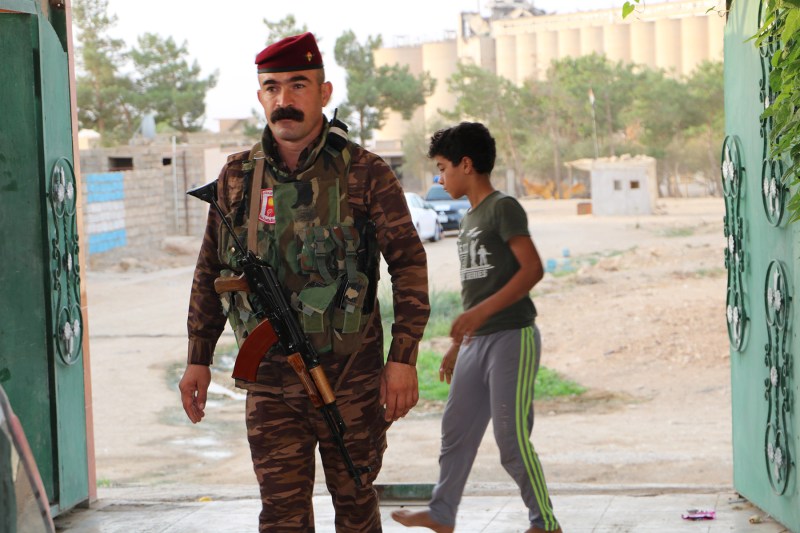 A son of Ezidxan Protection Force deputy commander Edo Hayder Murad, part of one of the few families living in Sinjar town, prepares to patrol the area on Oct. 19. (Sam Mednick for Foreign Policy)

He’s calling on the international community to create an armed force based in Sinjar to protect the Yazidis. But talks with the Americans and Europeans have so far yielded few results. Cmdr. Murad even requested a one-on-one meeting with U.S. President Donald Trump but says he’s yet to receive a response. He worries if the predominantly Shiite PMU takes over, his people will be even worse off than under the Islamic State.

According to a report by the International Crisis Group published in February, there’s reason to worry. Since October 2017, the PMU has had the political and military upper hand in Sinjar and is providing a corridor for Iran to gain access to Syria, through territory the militia wrested from the Islamic State. In the past year, the PMU has also seized additional areas along the Syrian border. External forces will continue to fight for strategic control of Sinjar as long as the Iraqi government remains weak.

The PMU dismisses the notion that it’s trying to gain regional power. “If we wanted to use Sinjar Mountain to control Israel or for any other purpose it would be something to be discussed in the future,” Khala Ali, a PMU commander told FP. He acknowledged that Iran had directed the group to have a stronger presence in the region but refused to elaborate.

The Iraqi Army, meanwhile, has assured civilians that the area is safe, telling FP that the only reason Sinjar isn’t fully under its control is because of a lack of troops, said Maj. Gen. Najim Abdullah al-Jubouri, the Nineveh Operations commander. 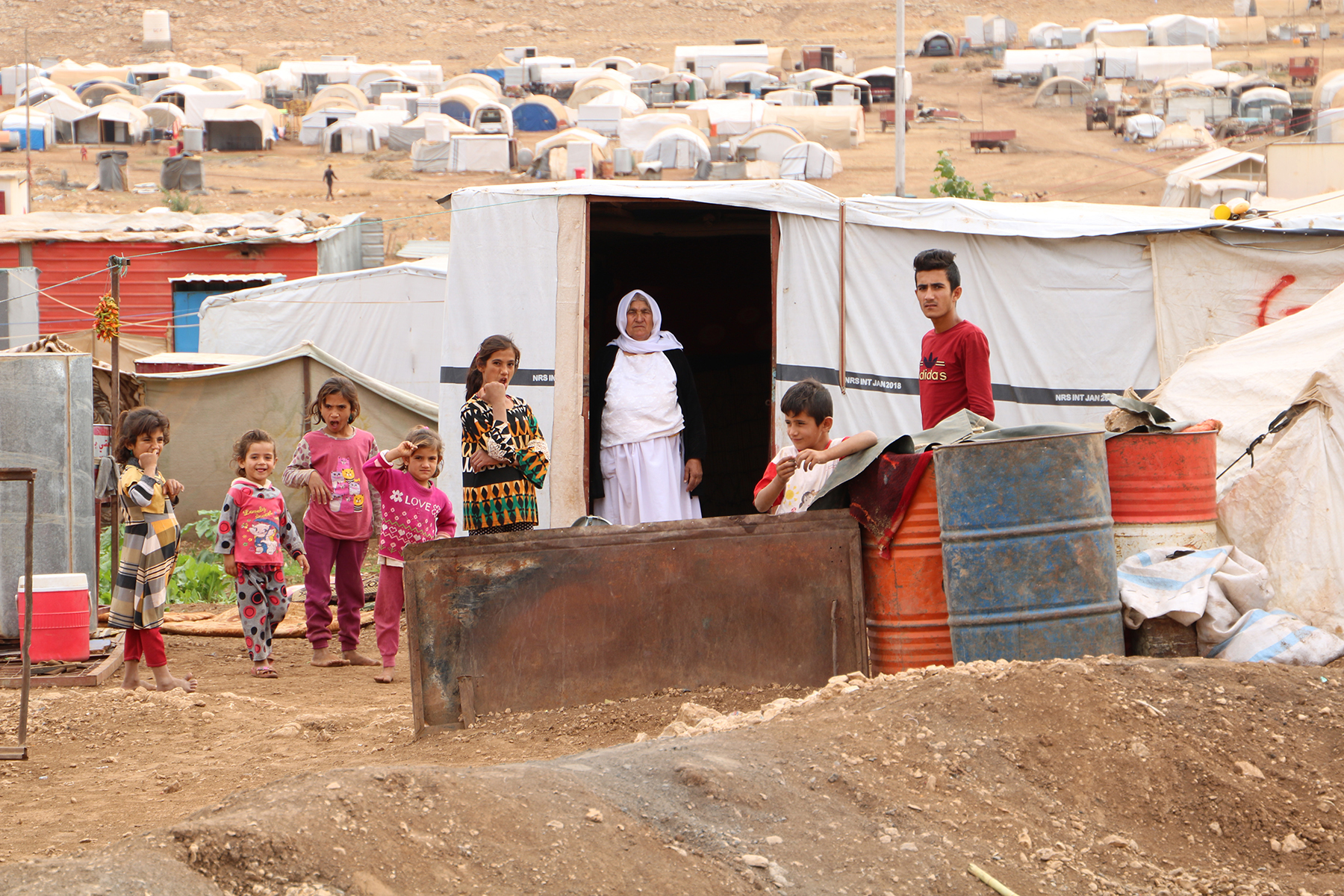 Herto Hamrash Minut’s wife and children stand outside their tent on Oct. 19 on Sinjar Mountain, where they’ve been living for more than a year, too afraid to return to the town. (Sam Mednick for Foreign Policy)

Meanwhile, thousands of Yazidis who fled their homes four years ago remain wary and unconvinced, as painful memories of being abandoned and left to die by the Iraqi and Iraqi Kurdish Peshmerga forces when the Islamic State attacked, remains singed in their minds.

More than 3,000 people are still sheltering on the side of the picturesque mountain range, preferring to brace for another cold winter in tattered tents than return to their homes. On a visit to Sinjar in October, more than a dozen Yazidis said they don’t trust any of the armed groups at the base of the mountain.

“If they don’t bring us an international force we won’t go back,” said Baraket Hudeda Castle. The 38-year-old Yazidi, a former officer in the Iraqi Army, was once a captive of the Islamic State and has been living on the mountainside since his family paid the jihadi group $60,000 for his release in the summer of 2014. “They told me they were going to cut off my head and mail it to my relatives,” he said, cringing as he recounted the month he spent as a captive in Syria.

Herto Hamrash Minut, 74, was kidnapped by Islamic State fighters in his village near Sinjar four years ago and held for more than eight months. “They’d starve us; it was like living in hell,” he said, hanging his head. Crouched outside his tent on the mountain surrounded by his two wives and 12 children, the frail old man traced his fingers over his ears. He lost most of his hearing during his time in captivity when his captors would hit him over the head. Minut’s family has been living on the mountain for more than a year with no plans to leave; they don’t even know who is responsible for their safety.

Most Yazidis on the mountain are pinning their hopes for a new future on one of their own. This year’s Nobel Peace Prize co-winner, Nadia Murad, is from Sinjar district, and was recognized for her efforts to end sexual violence as a weapon of war. Murad was one of an estimated 6,500 Yazidi women and girls abducted and sold into sexual slavery when the Islamic State attacked in 2014. She managed to escape and make her way to Germany, where she now lives as a refugee and runs Nadia’s Initiative, an advocacy organization.

“We suffered but didn’t give up. We were not helped and rescued when ISIS attacked, but I hope this recognition means that the international community will help us recover from this genocide and will prevent such attacks against other communities like us in the future,” Murad told FP. 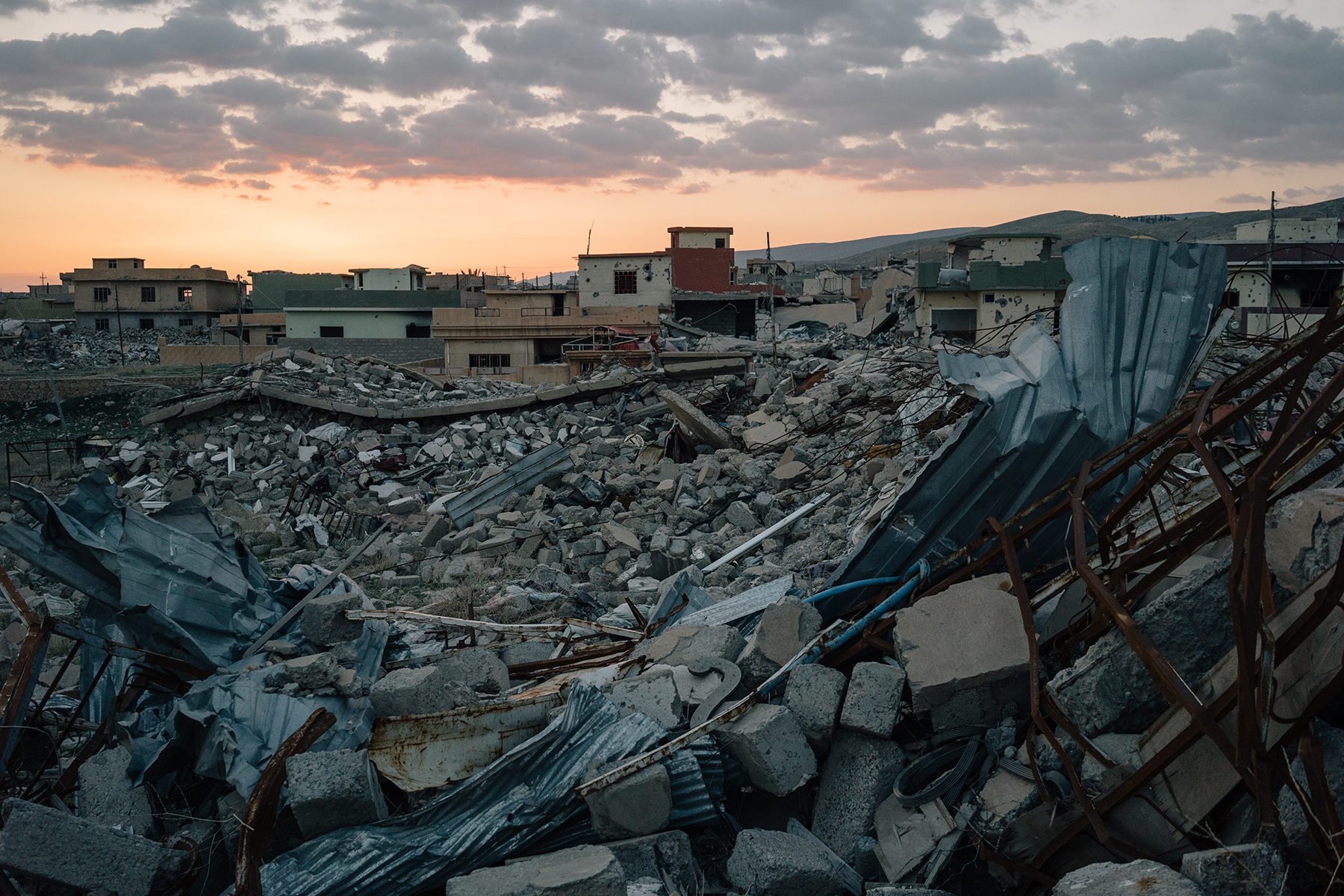 The 25-year-old is donating all her prize money to the organization and hopes the award will convince the Iraqi government as well as other countries to form a special task force to rescue the estimated 3,000 remaining Yazidi women and girls still held captive. Her organization is concerned that if real steps aren’t taken to help the community recover from the genocide that the Yazidis will forever disappear from the region.

“She was the first person to speak out and be courageous and talk about what happened to us. The most important thing she can help us do now is to bring back the Yazidi prisoners and help clean our land,” said Morat Alias, a Yazidi living on the mountain.

In October, the United States announced it was giving more than $178 million to support vulnerable communities in Iraq, specifically focusing on religious minorities, bringing the total amount of U.S assistance for vulnerable communities to nearly $300 million since the 2017 fiscal year, according to the State Department. But despite such shows of support, reconstruction in Sinjar is sluggish and a deeply skeptical Yazidi community is still too terrified to return, nervous that they’ll be targeted again.

Littered throughout the city’s dilapidated streets, remnants of the Islamic State’s brutal reign linger while fresh pledges of allegiance continue to surface posing a constant reminder that nearby sleeper cells lurk in the dark. Scribbled on the side of a house read the words, “ISIS will stay forever,” written in August by a 12-year-old boy, according to a neighbor.

“I think one day ISIS will come back,” said Qasim Morat, a local living in Sinjar. “It’s an ideology and you can’t get rid of them by killing.”

Sam Mednick is a freelance journalist and the South Sudan correspondent for The Associated Press. She covers conflict, post-conflict, and development and has written for VICE, the Guardian, Devex, and News Deeply, among others. Twitter: @sammednick
View
Comments
Tags: Dispatch, Iran, Iraq, ISIS, kurdistan, kurds, refugees, Syria