Women Want to Put Yemen Back Together Again

In 2011, giant posters of women appeared on billboards, taxis, and buses across Yemen. Some wore colorful hijabs, leaving their faces uncovered, while others wore black niqabs, revealing only their eyes. All flashed giant smiles as they held thumbs up signs with dark purple ink staining the tips of their fingers.

The billboards were part of a United Nations education campaign to support voting referendums in Yemen’s upcoming presidential elections, and to encourage all Yemenis, especially women, to engage with the political process. “Everyone was expecting a new Yemen,” Nisma Mansoor, a Yemeni women’s rights activist, told me as we sat in her father’s home near the once-thriving waterfront of the southern port city of Aden.

But within months, the women’s hopeful smiles had been destroyed—slashed through with angry black markings. It was an early sign of unrest in Yemen that foretold an imminent reversal of the progress that women’s rights activists had made leading up to Yemen’s 2012 presidential election. “Then war came,” Mansoor said, “and everything collapsed.”

In 2011, giant posters of women appeared on billboards, taxis, and buses across Yemen. Some wore colorful hijabs, leaving their faces uncovered, while others wore black niqabs, revealing only their eyes. All flashed giant smiles as they held thumbs up signs with dark purple ink staining the tips of their fingers.

The billboards were part of a United Nations education campaign to support voting referendums in Yemen’s upcoming presidential elections, and to encourage all Yemenis, especially women, to engage with the political process. “Everyone was expecting a new Yemen,” Nisma Mansoor, a Yemeni women’s rights activist, told me as we sat in her father’s home near the once-thriving waterfront of the southern port city of Aden.

But within months, the women’s hopeful smiles had been destroyed—slashed through with angry black markings. It was an early sign of unrest in Yemen that foretold an imminent reversal of the progress that women’s rights activists had made leading up to Yemen’s 2012 presidential election. “Then war came,” Mansoor said, “and everything collapsed.”

After three years of bloody civil war, Yemen is now considered the world’s worst humanitarian disaster. The war has killed at least 10,000 civilians, although the number is likely much higher, and has pushed up to 14 million more to the brink of starvation. Last month, U.S. Secretary of State Mike Pompeo and Secretary of Defense Jim Mattis called on all warring parties to agree to terms for peace talks within 30 days. The deadline has since been pushed back to the end of this year, but the fighting to reclaim Houthi strongholds, including the key port city of Hodeidah, has intensified. So, too, have calls for peace.

But women in Yemen say they are being excluded from critical discussions about rebuilding the nation after war. Yemeni activists say the U.N. and the United States—actors that have committed to the inclusion of women in peace processes—have not insisted strongly enough on women’s participation. Without women, peace in Yemen will be hard to come by. And in the meantime, countless Yemeni women who have been pushed into the role of breadwinner during the war still lack the education and training to get jobs to sufficiently provide for their families.

Yemen’s conflict began when the Houthis, an Iranian-backed rebel group, swept down and seized control of much of the country in protest against widespread corruption and abuse in the administration of former President Ali Abdullah Saleh. In March 2015, a coalition of states led by Saudi Arabia and supported by the United States intervened to reclaim Yemen on behalf of the internationally recognized government. Both sides have been accused of committing atrocities against Yemen’s civilian population.

The effect on women has been devastating. In 2011, inspired by the Arab Spring, many women took to the streets to reclaim their rights after nearly three decades of increasingly conservative politics and growing fundamentalist ideological influences that eroded the status of women and girls in Yemen. They used the momentum of that movement and leveraged new political leadership vying to build a modern state, aiming to secure a minimum quota of 30 percent women’s representation in the Yemeni legislature and a commitment to including language about women’s equality and rights in the new constitution. But when the war started in 2015, activist women quickly realized that the 30 percent quota they had worked so hard to achieve would not be honored, and that wartime conditions would more than reverse all the previous progress that had been made. 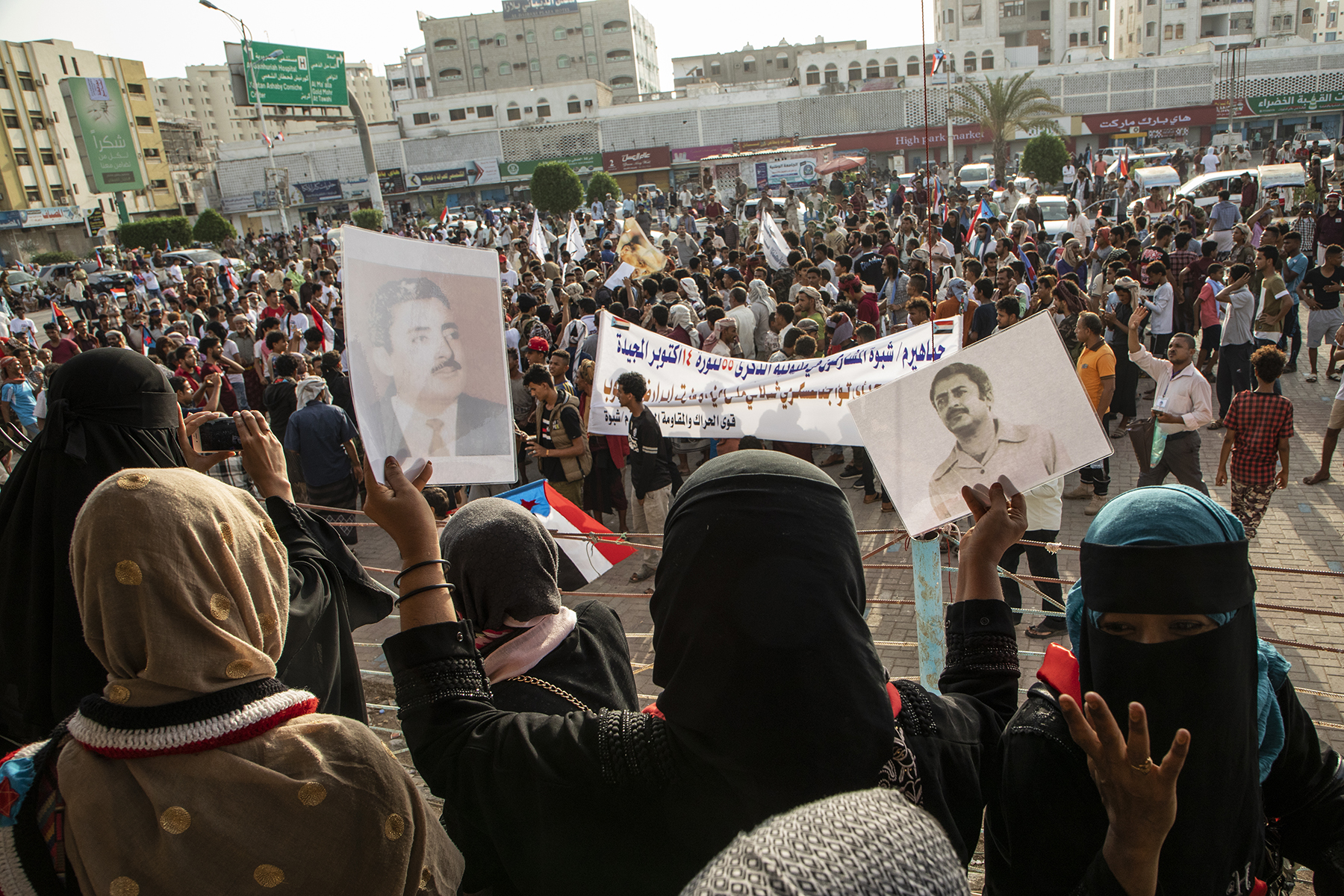 Women stand in the segregated section during a pro-secessionist Southern Movement rally in Aden, Yemen, on Oct. 14. (Will Swanson for Foreign Policy)

“The guns basically took over the space, and the international community also marginalized the women,” said Sanam Anderlini, founder of the International Civil Society Action Network (ICAN), an organization dedicated to promoting women’s rights, peace, and human security in countries affected by conflict.

In a typical recent scene in Aden, under the blazing sun, Yemeni widows dressed head to toe in long, black abayas, their faces covered with full niqabs, were holding out small bowls in hopes of getting a few Yemeni rials from sympathetic passersby, who themselves have little to offer. As inflation rises, little girls are being pulled out of school and married off to provide dowry money to feed their starving families. Rates of gender-based and sexual violence are also increasing as the conflict escalates, according to an August report from the U.N. Population Fund; an estimated 3 million Yemeni women and girls are at risk of gender-based violence. Women and children comprise about three-quarters of Yemen’s 3 million displaced people, and are “paying the heaviest price, as in most humanitarian crises.”

Yemeni activists believe that the best way to improve women’s lives after the war would be to include them in the ongoing peace negotiations. Research shows that women’s participation in peace processes makes countries safer, less violent, and more stable. When women are included in negotiations, there is a 35 percent increase in the probability of an agreement lasting at least 15 years. Higher levels of gender equality have been associated with lower rates of conflict within and between countries. Women also tend to invest more time and energy in addressing issues affecting women and children, such as healthcare, education, social protection, and sanitation—all fundamental underpinnings of a functional society.

But as Melanne Verveer, the executive director of the Georgetown Institute for Women, Peace and Security, wrote in Foreign Policy earlier this month, women comprise “only 2 percent of mediators, 5 percent of witnesses and signatories, and 8 percent of negotiators” around the world.

Yemeni women and nongovernmental organizations like ICAN have appealed to President Abed Rabbo Mansour Hadi and other government officials who had paid lip service to the idea of women’s participation before the war, but they said the government took no concrete steps to ensure that women were included the table. “The first thing [leaders] give up or compromise is the women’s agenda. They think it’s a luxury,” said Mansoor. “Every time we talk to them, they’re like, ‘Oh, we’re busy with the fighting, do you see how much we have on our hands?’”

So Yemeni women activists are looking to the U.N. to uphold its collective commitment to women’s rights. They hoped to benefit from U.N. Resolution 1325, which calls for the adoption of a gender perspective to consider the “special needs of women and girls during conflict, repatriation and resettlement, rehabilitation, reintegration and post-conflict reconstruction.” 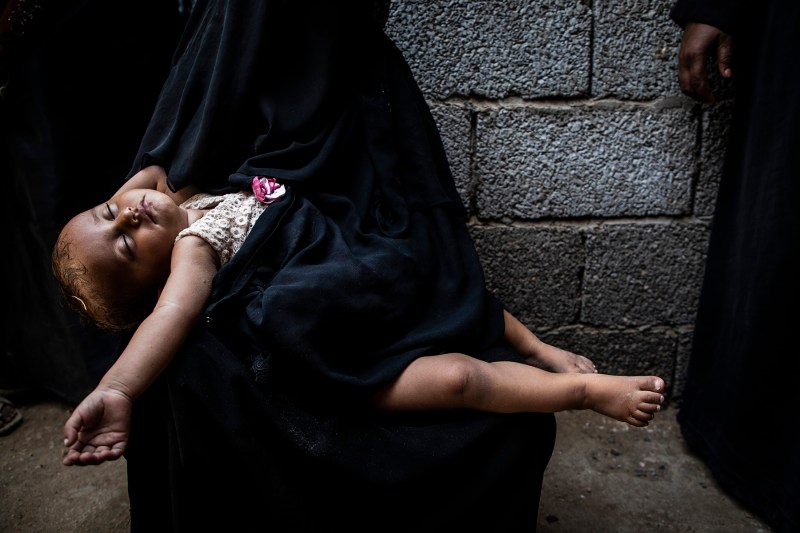 A child sleeps in her mother’s arms while waiting to receive medical attention at a temporary clinic run by the International Rescue Committee near Aden, Yemen, on Oct 15. (Will Swanson for Foreign Policy)

Rasha Jarhum, a co-founder of the Peace Track Initiative, an organization that works to improve the state of women’s rights in Yemen and promote women’s inclusion in politics, said that while U.N. Special Envoy for Yemen Martin Griffiths has taken the time to meet with female activists and listen to their concerns, the U.N. has been unable to translate this into a concrete commitment to having women present in primary roles at key peace discussions. “If the U.N. envoy himself does not respect gender equality, how can he impose gender equality or call for 30 percent quota on the Yemeni actors?” she asked.

Jarhum suggested an enforcement mechanism: If warring parties do not bring 30 percent women to Yemen’s peace talks, their seats designated for women should remain empty instead of being filled with men. But the U.N. has avoided that idea, suggesting it would jeopardize the political talks.

The activists also feel that countries like the United States and United Kingdom, which have backed the Saudi-led coalition, have an obligation to ensure that women have a role in shaping the future of Yemen. “They always say that they are supporting human rights,” Mansoor told me. “Women’s rights are human rights.”

The United States has also been slow to take a strong stand on the inclusion of women in peace talks. Last year, U.S. President Donald Trump signed into law bipartisan legislation known as the Women, Peace and Security Act, which requires the government to create a strategy to increase the participation of women in peacekeeping and security operations, due to Congress within one year of its enactment, and calls for training of American personnel on how to support increased inclusion of women in peace negotiations around the world.

But implementation hasn’t happened. Earlier this month, Sens. Jeanne Shaheen (D-N.H.) and Shelley Moore Capito (R-W.V.) submitted a letter to the Trump administration requesting a status update on the strategy, which was due to Congress last month. “We are deeply concerned that the deadline for the report’s submission to Congress has passed without a forthcoming strategy,” the letter read. A State Department spokesperson told FP that the White House is currently working to finalize the strategy, which will bring together the tools and skills of at least four executive branch organizations—the departments of State, Defense, Homeland Security, and USAID—in coordination with the White House.

For some activists, like Rasha Jarhum, the time for waiting is over. She is pushing for an independent women’s delegation to represent the Yemeni women and girls in primary negotiations at the peace talks. Jarhum and other activists want women to have a significant role in determining laws, policies, and practices for the Yemeni government moving forward. They want women to be placed in leadership positions, including as legislators, local officials, and judges, so they can institute safeguards that ensure that women are protected and given equal opportunities for empowerment. They want women to sit with the negotiating parties, and they want women’s voices to carry equal weight.

“We’re done calling for participation,” Jarhum said. “We don’t need an invitation to support the peace process of our country.”

Neha Wadekar is a Nairobi-based journalist.