In his dedication speech, Modi described the statue as “a source of unity … With this sentiment, we should march … and march with a dream to make the country one India, superior India.” More specifically, by attracting tourists from all over the world, “it will lead to job creation,” he said, and “prosperity” to the indigenous groups who call the area home.

There is no argument to be made against memorializing Patel’s achievements. As deputy prime minister and minister of home affairs, he led the integration of 562 princely states into India. The name of the statue is a nod to this unification process. And poor countries have as much a right to myth-building as the rich. The national tendency to dismiss the history of colonial India, despite the inspiring movement that won independence, requires correction. 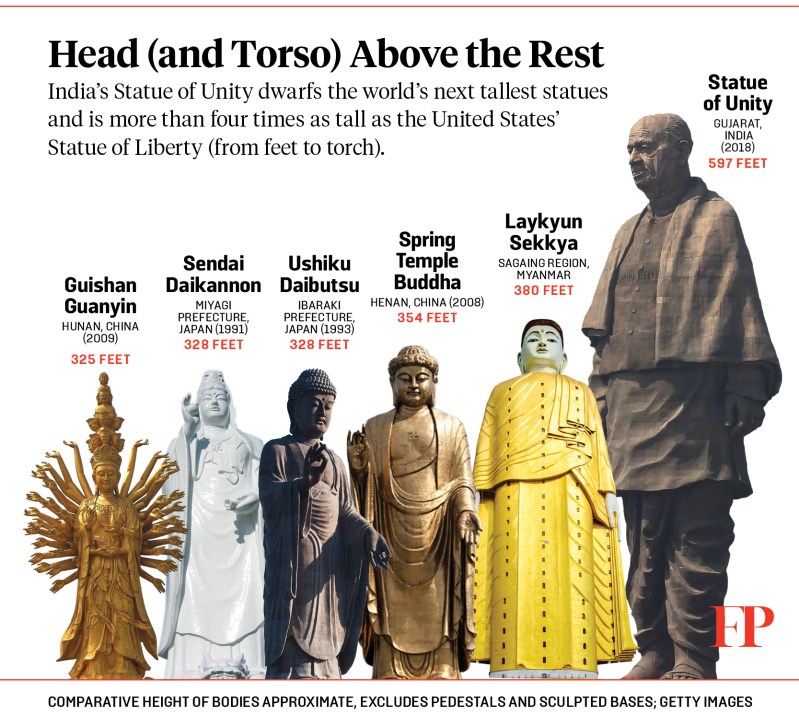 Even so, Indians deserve an explanation from the government when it comes to the extravagant cost of the statue. After all, Patel was a Gandhian committed to austere ways. To honor an ascetic man with the world’s tallest statue is a questionable choice, leaving people to wonder whether the statue is really about how Modi wishes to be perceived by the world. The website for the statue features nearly 100 images of the prime minister touring the site—twice the number of images of Patel’s likeness.

Modi’s promise of job creation is also a disingenuous one. An analysis by the data journalism organization IndiaSpend shows that for the same cost, the government could have funded nine institution of higher learning, six missions to Mars, and five new solar plants.

India’s unemployment rate is the highest it has been in 20 years. A World Bank report published in April predicted that the country would need to create more than 8 million additional jobs per year to keep up with its population growth by 2025. 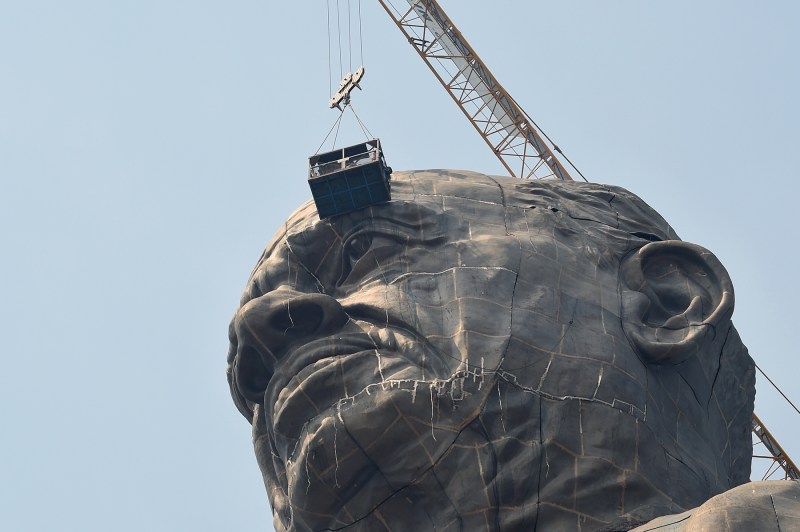 Such spending is inexcusable at a time when hundreds of millions of Indians remain very poor, despite the economic growth of recent years. The government isn’t meeting their basic needs—for sanitation, housing, health care, quality education, clean air, and even food security. The Global Hunger Index ranked India 103rd out of 119 qualifying countries in 2018, warning that the level of hunger was serious.

The statue and its attendant facilities—a memorial garden and museum, among them—was built on land appropriated from indigenous communities in 72 villages. These are the very people Modi promised would benefit from the statue. Village leaders told the media that although they were offered compensation it was far below the market rate.

Others said the new land is not fertile. To protest Modi’s arrival in Gujarat, some threatened to kill themselves. In a letter to the prime minister, 22 village leaders wrote: “With this ambitious project of yours we can’t even fathom the number of people who have and who will lose their livelihoods and homes.”

And although he publicly praises unity, Modi’s politics suggest it isn’t a priority. He was the chief minister in Gujarat in 2002 when a pogrom killed more than 1,000 Muslims and displaced tens of thousands. And up to 90 percent of the hate crimes in India since 2009 occurred after Modi became prime minister in 2014, according to the Citizen’s Religious Hate Crime Watch. 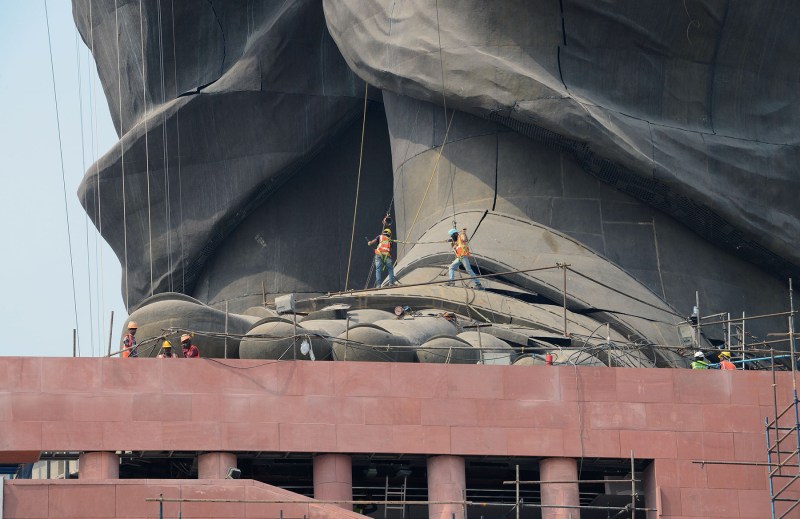 Indian workers at the feet of the Statue of Unity reveal the scale of the world’s tallest statue as they finish work near Kevadiya, India, on Oct. 18. (Sam Panthaky/AFP/Getty Images)

This year alone vigilante groups have attacked 88 people—often on the pretext of protecting cows, which are sacred to Hindus, or protesting interfaith relationships—resulting in 29 deaths. Modi’s silence on the subject is likely interpreted as approval by perpetrators, the majority of whom are Hindu, as well as by their mostly Muslim victims.

Commentators in India have pointed out the irony of Modi, a member of the paramilitary Hindu nationalist organization Rashtriya Swayamsevak Sangh (RSS) since age 8, paying homage to a Indian National Congress party freedom fighter. The RSS chose the security of the Raj over Mahatma Gandhi’s seemingly impossible struggle for freedom. In 1948, a former member of the group murdered Gandhi. Patel, by then deputy prime minister, banned the RSS. “The activities of the RSS,” he wrote to a colleague, “constituted a clear threat to the existence of the Government and the State.”

But the prime minister is drawn to nationalist figures. With no one on the right side of history who is also on his side of the ideological spectrum to turn to, Modi must make do with members of other parties. Patel was known as the “Iron Man of India,” a sobriquet whose appeal to a strongman is clear.

Other leaders in the prime minister’s Bharatiya Janata Party have been inspired to work on statues of their own. In Maharashtra, construction is ongoing on the nearly 700-foot statue of warrior king Chhatrapati Shivaji Maharaj. The estimated cost to the public is upward of $500 million.

And in Uttar Pradesh, the northern state that is home to some of the hungriest people in India, construction firms recently presented bids to Chief Minister Yogi Adityanath for an even taller statue of the mythical Lord Ram, which will likely cost tens of millions as well. Two weeks after the Statue of Unity was inaugurated, the Indian government sought foreign aid to pay for a polio vaccine described as critical to maintaining the country’s polio-free status.

Statues commemorate the past. But the statues being built in India are a comment on the present. The higher they rise, the more they become a symbol of an undernourished, undereducated generation who could have been served by politicians making better use of public funds.

Sonia Faleiro is the author of Beautiful Thing: Inside the Secret World of Bombay’s Dance Bars and a founding member of the journalism cooperative Deca. Twitter: @soniafaleiro