The United States is hampering some aid groups from fighting tuberculosis and other diseases in North Korea.

The administration of U.S. President Donald Trump is restricting some international relief agencies from delivering humanitarian assistance to needy North Koreans, in the latest effort to compel Pyongyang to dismantle its nuclear arms program.

In recent months, U.S. diplomats have delayed the export of surgical equipment and supplies for fighting tuberculosis and malaria to North Korea, and held up the delivery from Canada of 300 stainless steel soy-milk cans for day care centers and orphanages there, according to several diplomatic sources and internal United Nations documents.

The measures, which the United States is channeling through the U.N. Security Council committee responsible for monitoring sanctions on North Korea, appears to be part of Washington’s maximum pressure campaign against North Korean leader Kim Jong Un’s regime.

In recent months, the State Department has also restricted visas for American aid workers seeking to work in Pyongyang, while the Treasury Department has imposed cumbersome licensing requirements on private charities that work with North Koreans.

At the United Nations, the United States has routinely blocked or delayed for months the delivery of medical supplies and water sanitation equipment and prevented charities from supporting food and agricultural infrastructure programs.

Last month, a top official at U.N. Children’s Fund, or UNICEF, warned that its operations in North Korea “may be compromised” if vital equipment, including solar water pumps that supply fresh water in hospitals for drug-resistant tuberculosis patients, isn’t approved on “an urgent basis.”

“All these items are critical to UNICEF’s humanitarian activities in [North Korea],” Omar Abdi, UNICEF’s deputy Executive Director wrote in a confidential November 30 letter to the U.N. sanctions committee.

The International Federation of the Red Cross (IFRC) has been seeking for more than two months to persuade the United States to lift a hold on equipment needed to ensure that clinics which provide anti-tuberculosis tablets have clean water to wash them down.

“We are providing very basic medical equipment, which we can monitor and hand to a little clinic with confidence it can’t be diverted,” said Richard Blewitt, the IFRC’s head of delegation and permanent observer to the U.N. He said that water taps and kidney trays are among the items being held up by the United States.

In December 2017, the Trump administration secured U.N. Security Council support for a resolution sanctioning North Korea in retaliation for its launch of an intercontinental ballistic missile. The sanctions resolution—which targeted Pyongyang’s energy and export sectors—allowed exemptions for the delivery of humanitarian aid, as long as it was approved by Security Council sanctions committee.

A set of guidelines drawn up by the sanctions committee in August to expedite the approval of humanitarian goods states that the sanctions “are not intended to have adverse humanitarian consequences for the civilian population of [North Korea] or to affect negatively or restrict those activities, including economic activities and cooperation, food aid and humanitarian assistance, that are not prohibited.”

Under questioning from diplomatic colleagues, U.S. officials acknowledged that Washington had imposed a tougher policy for humanitarian assistance. According to the new terms, the United States is only approving medications and other life-saving aid used to prevent the spread of infectious diseases like tuberculosis (TB) and malaria. But infrastructure projects that improve hygiene at clinics that treat TB patients have faced higher hurdles for approval. Delays have increased from weeks to months.

Outgoing U.S. Ambassador to the United Nations Nikki Haley devised the U.S. position and U.S. Secretary of State Mike Pompeo endorsed it, according to diplomatic sources. Pompeo is the driving force behind the U.S. maximum pressure campaign on North Korea.

“Where we needed to send medicines and life solutions … we have done that, and we will continue to do that,” Haley told reporters outside the U.N. Security Council on November 8. But she said U.S. officials were taking their time to carefully vet all exemption requests to ensure aid is not being diverted for other purposes.

Another U.S. official laid the blame on Pyongyang, saying North Korea faced a “protracted humanitarian crisis” because Kim’s regime “continues to use its own resources to finance its WMD program and military weapons rather than provide for the basic welfare of its citizens.”

The government could meet the entire cost of the United Nations’ $111 million humanitarian appeal by redirecting funds from its nuclear and weapons programs, the official said.

“The only way to resolve the humanitarian crisis is for the regime to join the community of nations, begin to respect human rights, invest in the well-being of its people instead of illicit activities, and adhere to international standards for access and monitoring of humanitarian assistance.”

The United States recently lifted its hold on millions of dollars worth of goods from the U.N. Children’s Fund, or UNICEF, to fight TB and malaria, and from the Eugene Bell Foundation, which supports programs that combat drug-resistant tuberculosis.

The foundation first requested an exemption in February, 2018, but resubmitted its request in September to meet the U.N. Security Council guidelines. The committee approved some of the supplies on November 29.

Dr. Stephen Linton, the founder of the Bell Foundation, welcomed the committee decision. He added that he is “not aware of any evidence that this administration has denied genuine tuberculosis aid,” he said.

But UNICEF and other relief agencies insisted that the approval delays for relief supplies was undercutting the battle against infectious diseases.

The sanctions committee continues to prohibit the import of a range of vital equipment, from supplies for water and sanitation and health projects to ambulances and spare parts for vehicles, according to UNICEF.

“The spare parts for vehicles are essential to ensure that such vehicles are able to reliably distribute tuberculosis and malaria medications and monitor programming,” Abdi wrote.

The failure to approve the UNICEF ambulances, he added, will prevent some 33,000 children under 5 years old and 7,000 pregnant women in remote communities gain “reliable access to basic health care.” Access to safe drinking water for another 50,000 vulnerable North Koreans “would  be significantly hindered” if the committee continues to block the delivery of critical supplies, Abdi wrote.

The U.S. position has left Washington politically isolated, and provided China and Russia, which favor an easing of sanctions on North Korea, with an opportunity to highlight what they claim is a callous American policy. Sweden and several other countries have been particularly outspoken about the need to relax restrictions on aid deliveries, while even stalwart American allies like Britain and France have urged the United States to ease up, particularly on items that promote health.

“There are certainly council members who think the U.S. had gone too far on their blocking and holding of some of the humanitarian exemption requests,” said a Security Council diplomat.

The U.S. strategy has been a particular burden on American charities because U.S. officials have denied their aid workers permission to travel to North Korea, according to reports in the Wall Street Journal and the New York Times. In March, the Treasury Department issued a new regulation requiring private charities to be licensed if they had “partnerships and partnership agreements” with the North Korean government, hampering their ability to work.

But the impact on non-American charities has also been considerable.

In late October, the Canadian government made a request for a humanitarian exemption on behalf of First Steps, a Vancouver-based Christian charity, to send 300 soy-milk cans to North Korea, according to internal diplomatic emails reviewed by Foreign Policy. When the sanctions committee chair asked council members to approve the shipment, the United States requested a two-week delay in responding. 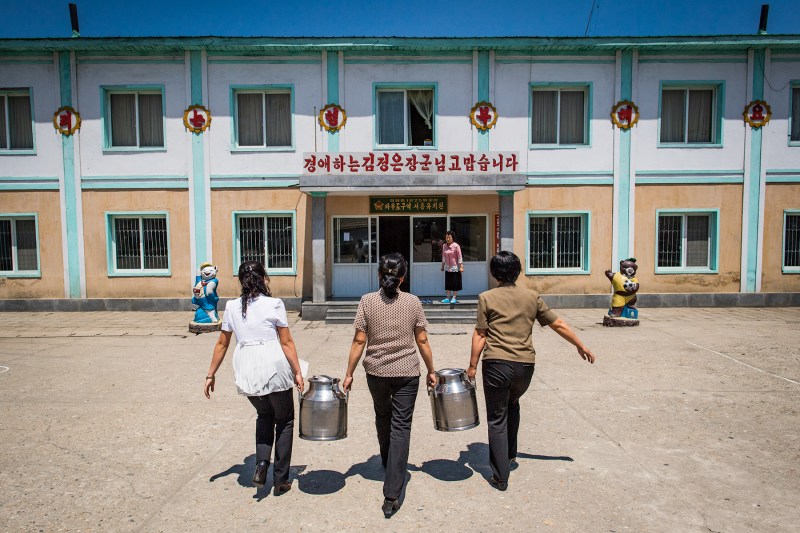 Workers from the Waudo Daycare and Kindergarten Supply Centre in North Korea deliver soy milk in stainless steel cans to a local kindergarten on June 4, 2017. U.S. sanctions have held up delivery of the cans from Canadian aid agency First Steps to North Korea. (John Lehmann for First Steps)

“In all honesty this would all be hilarious if it wasn’t so sad,” Susan Ritchie, the founder and executive director of First Steps, told FP. “These items are exclusively used to provide soy milk to some of the most vulnerable children in the world.”

The United States also held up deliveries from Concern WorldWide of Ireland and Italy’s Agrotec Spa company, which supplies tractors and spare parts under a European Union food security program, according to a report last month by the French news agency Agence France-Presse.

Robert Mardini, the U.N.-based representative for the International Committee of the Red Cross, which has a small program in North Korea, said that U.N. sanctions more broadly have hampered international relief efforts. Indeed, even China, which favors an easing of sanctions, has vigorously enforced them, turning back shipments of aid because they included banned metals. In January, Chinese customs officials blocked a delivery from Christian Friends of Korea, a U.S.-based charity, because it included nail clippers.

Mardini said U.N. banking sanctions are preventing his organization from transferring money to North Korea to fund a series of programs designed to improve sanitation and dispose of ordnance from the Korean War. He called for “humanitarian assistance in [North Korea] to be depoliticized and for the sanctions regime to continue to provide timely response for submission by humanitarian actors, including the ICRC.”

In a November 7 letter to President Trump, Edward Markey, the Democratic U.S. Senator from Massachusetts, said he was “deeply troubled” by the American restrictions.

Markey said that the U.S. Treasury Department requirements are so onerous that simple tasks now take months to complete and often require help from attorneys.

“The humanitarian situation in North Korea is far too dire for these draconian policies. The United Nations estimates that 60,000 children are at risk of starvation, and cases of drug-resistant tuberculosis—if left untreated—threaten to spread with devastating effect throughout the country and potentially into neighboring states,” he said.

But a feud between Russia and the U.S. has kept the document from being published.

Stephen Biegun is widely considered a great pick for the job. But it may be an impossible task in the first place.

Letting U.S. tourists back into the country would be a small but potent move toward peace.