With a large rise in U.S. defense spending and a new National Defense Strategy released in January, 2018 was the year the Trump administration left its mark on U.S. military policy.

Secretary of Defense James Mattis began reorienting the military away from the counterterrorism fight of the past two decades and toward competition with near-peers like Russia and China. The Pentagon began preparations to launch a new branch of the military, the Space Force. And top military officials declared the administration’s strategy in Afghanistan a success—even as the Taliban gained control of more and more swaths of the country. To cap off the year, President Donald Trump said he would withdraw all U.S. troops from Syria, drawing criticism from some lawmakers and experts who compared the decision to President Barack Obama’s hasty retreat from Iraq, and prompting Mattis to resign.

Here are five Foreign Policy articles that capture the major defense issues in 2018:

There is a mystery at the heart of China’s ambitious aircraft carrier program. Over the course of its immense naval modernization effort of the last two decades, China has put much effort into making aircraft carriers obsolete. Beijing has acquired dozens of submarines, fleets of strike aircraft, and missiles that can be fired from the air, land, sea, and under the sea, all with one purpose: to make it excessively dangerous for large surface ships to operate near China’s coast. China has even invented an entirely new class of weapon—the anti-ship ballistic missile—that has been dubbed a “carrier killer.” So why is China now investing in its own fleet of carriers?

American troops deployed in Syria who have experienced Russian electronic attacks say they are no less dangerous than conventional strikes with bombs and artillery. But they also say the confrontation is allowing U.S. troops a rare opportunity to experience Russian technology in the battlefield and figure out how to defend against it. 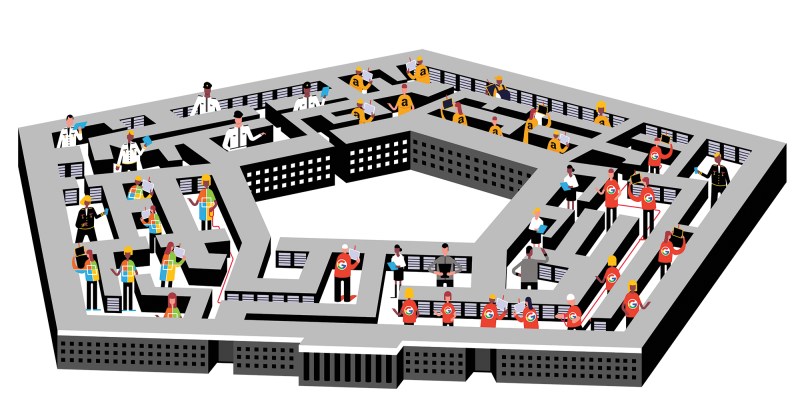 3. Why the Military Must Learn to Love Silicon Valley

The Defense Department’s slow-moving effort to build a massive cloud storage unit to securely warehouse and categorize top-secret information reveals the fundamental mismatch between the clunky, risk-averse Pentagon and the agile, innovative commercial technology industry. But it has also forced the department to confront a sobering truth: If it hopes to maintain U.S. military dominance, it must make such partnerships work.

4. Taiwan Can Win a War with China

Chinese commanders fear they may be forced into armed contest with an enemy that is better trained, better motivated, and better prepared for the rigors of warfare than troops China’s army could field against them. A cross-strait war looks far less like an inevitable victory for China than it does a staggeringly risky gamble

5. How the Generals Are Routing the Policy Wonks at the Pentagon

Frustrated by lack of influence and disheartened by Trump’s rhetoric, Department of Defense civilians are heading for the door, leaving key positions unfilled in a Pentagon increasingly run by active-duty or retired military officers.

The Year in Review |
Sasha Polakow-Suransky