In the age of social media and instant gratification, there can be little more satisfying than an old-fashioned long read. In 2018, Foreign Policy offered up a surfeit of impressive stories at length. Here is a sample of some of the best work. These stories are joined by more than their word count: They are well argued, they’re deeply reported, and they span the breadth of the globe.

In March 2017, United Nations officials Zaida Catalán and Michael Sharp were brutally murdered while on an investigative mission looking into the extrajudicial deaths of Congolese citizens in the Democratic Republic of the Congo. For the past year, the deaths of Sharp and Catalan had been officially described as a random ambush, a tragic loss, and dismissed as the work of a rebel militia. But after reviewing thousands of pages of material, and conducting dozens of interviews, FP’s Colum Lynch, working in collaboration with Radio France Internationale, Le Monde, Sveriges Television, and Süddeutsche Zeitung, found that the United Nations had buried evidence these two workers had been targeted by what looked like a government setup. In other words, their death was not random; it was pre-arranged, and the perpetrators have yet to be brought to justice. Meanwhile two families, one in Kansas and one in Sweden, continue to grieve.

2. The Taliban’s Fight for Hearts and Minds

When the United States went to war in Afghanistan in the fall of 2001, the American press was filled with stories about the retrogressive and destructive Taliban. Women were barred from education; images and stories of gladiator-style killings of criminals and those who ran counter to the imposed cultural norms were rampant. But as U.S. troops have slowly withdrawn from Afghan regions, the Taliban have stepped into the void and become the government—with some surprising results. Ashley Jackson, a research associate at the Overseas Development Institute and a Ph.D. candidate at King’s College London, has spent years crisscrossing Afghanistan. She put on a burqa, got in a Toyota Corolla, and traveled across the country, speaking to Taliban leaders. Here she reveals the results of her work. The Taliban of 2018, she writes, have a far different campaign in mind than what was seen in 2001: Now, they intend to win over villagers and community leaders alike. Rather than destroy the services and government facilities they have captured, they have co-opted them. Jackson also appeared on the First Person podcast to talk about her reporting. 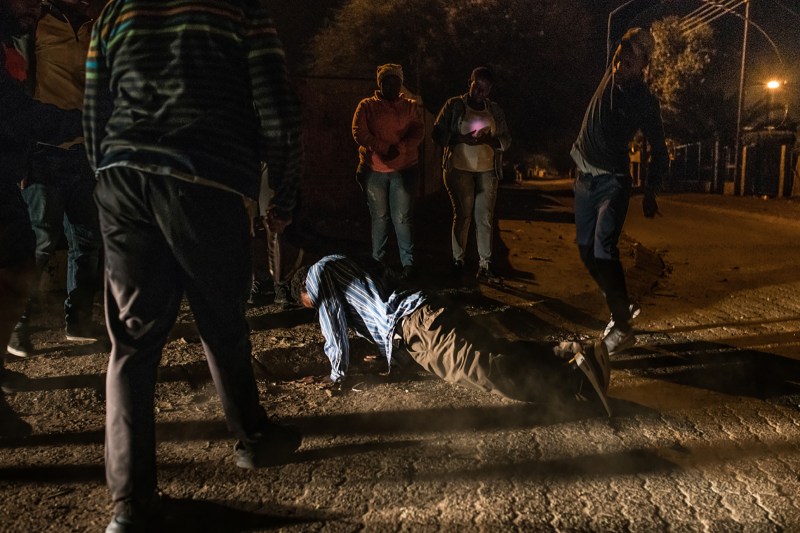 3. South Africans Are Taking the Law Into Their Own Hands

As South Africans lost faith in police and government due to corruption, vigilante justice stepped into the void. Mob violence has led to brutal killings over the last several years. Freelance journalist Christopher Clark documents how the townships created under apartheid are now rife with anarchic street justice violence. These self-appointed justice mobs came to the fore in response to rampant gang crime, Clark writes, but now the mobs themselves have come to terrorize these neighborhoods. Mary Nel, a Stellenbosch University Faculty of Law lecturer who wrote her thesis on South African vigilantism, told Clark, “Vigilante groups by their very nature are sort of in that gray area between the law and crime and so it’s very easy to overstep that mark. These groups often start with good intentions, then they get a bit of power and that power corrupts or is co-opted.”

4. How Venezuela Struck It Poor

One million Venezuelan refugees now live in Colombia. Over five-hundred thousand have moved to Peru. Thousands more have decamped for Ecuador and Brazil. They are all fleeing the failing state run by Nicolás Maduro. FP’s Keith Johnson walks readers back to the origin story of how Venezuela unraveled and explains how former president Hugo Chávez managed to destroy the economy of the most oil-rich nation on earth. “The combination of plummeting oil revenues and years of government mismanagement has virtually killed off the country’s economy, sparking a humanitarian crisis that threatens to engulf the region,” Johnson writes.

#MeToo has brought to light a cascade of horrific disclosures of sexual harassment, assault, and predation from New York to Hollywood to Beijing. But while many of those stories involve narrating the fault lines of intra-professional relationships, here Joanna Chiu, now the deputy bureau chief of the Star Vancouver, tackles a space where #MeToo can be harder to articulate, and even more difficult to address. She writes of the all-too-common practice of foreign correspondents in China who seem to believe a man’s foreigner status entitles him to push for sex, use crude language, or touch and speak to women in a manner he would likely never engage in back at home. Chiu argues that the privilege these aggressors display isn’t wrong merely because it diminishes the women harmed—though that’s clearly bad enough—but it may also be fundamentally undermining and perverting the Asia coverage these harassing correspondents produce.

Sarah Wildman is Foreign Policy’s deputy editor for print and the host of the First Person podcast. She is the author of Paper Love: Searching for the Girl My Grandfather Left Behind. Twitter: @SarahAWildman