Controversies surrounding Brexit have paralyzed British politics ever since the June 2016 referendum, in which 52 percent of voters chose to leave the European Union. The question of what form Britain’s exit from the EU will take has overshadowed all other political debates while threatening, but not yet succeeding, in bringing down Prime Minister Theresa May’s government.

The process is now reaching its moment of truth. May has survived a no-confidence vote called by rebels within her own party, but that does not mean smooth sailing ahead. Her unpopular deal will face a (delayed) parliamentary vote in January and appears headed for defeat. That could lead to a revised deal (if EU negotiators agree to revisit the deal), no deal at all (which many economists argue would be devastating), or a second referendum (though it’s unclear what the question would be). Uncertainty will be the only constant in British politics for the next three months.

These five Foreign Policy stories from the past year offer some clues about what the eventual outcome—and its consequences—might be.

In a December 2017 article for FP, Walshe, a former advisor to David Cameron, anticipated the current conundrum faced by May’s government. As the Brexit crisis intensifies, Walshe now argues that it is plunging the country into a constitutional crisis.

Bogdanor, a King’s College professor and former mentor to Cameron, argues that the country and its liberal democratic institutions will survive the current uproar surrounding May’s proposed deal and the political instability that it has created, even if May herself does not. 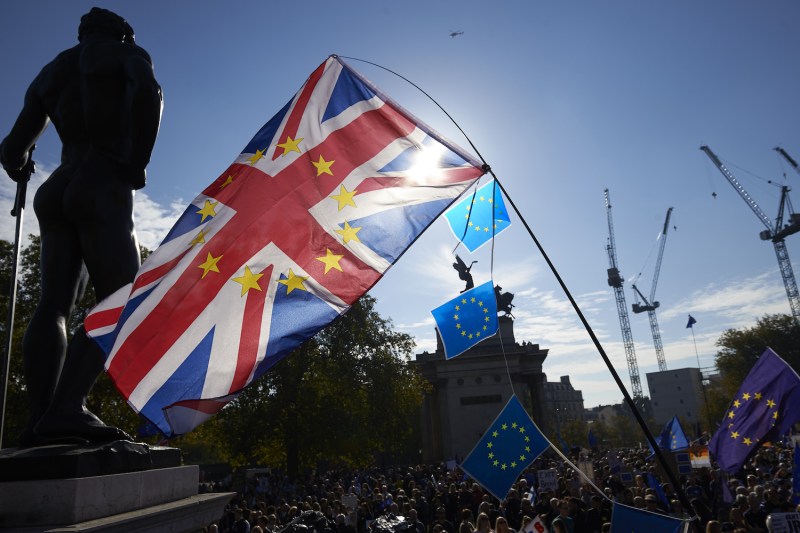 Demonstrators wave a British flag with European Union stars and European Union flags as they take part in a march calling for a People’s Vote on the final Brexit deal, in central London on Oct. 20. (NIKLAS HALLE’N/AFP/Getty Images)

3. A Second Vote on Brexit Won’t Enhance Democracy. It Will Undermine It.

Slater, a pro-Brexit journalist at Spiked magazine, argues that second-referendum campaigners are acting in bad faith. In the name of democracy, they are seeking to reverse the referendum’s result before Brexit ever has a chance to succeed.

4. A No-Deal Brexit Will Destroy the British Economy

Tilford, an economist, argues that crashing out of the EU without a deal will not be an easily managed process, as some hard-Brexit proponents insist. Instead, he contends, it will lead to epic traffic jams, food and medicine shortages, and a recession.

The Democratic Unionist Party (DUP) is a little-known Northern Irish political party with just 10 seats out of 650 in the British Parliament. But that’s enough to keep May in power; without their support her government would not command a majority. As Brexit negotiations come to a head, the tiny DUP is playing a outsized role. Its hard-line demands have influenced May’s negotiating strategy because she is dependent on the DUP’s backing to stay in power. Northern Irish journalist Newton Emerson explains the party’s origins and what’s behind its brinkmanship.

Sasha Polakow-Suransky is a deputy editor at Foreign Policy. He is the author of Go Back to Where You Came From: The Backlash Against Immigration and the Fate of Western Democracy and The Unspoken Alliance: Israel’s Secret Relationship with Apartheid South Africa. Twitter: @sasha_p_s