Five Reads: The best Foreign Policy stories to help make sense of Russia′s role in the world in 2018.

Russia has never been far from the headlines in 2018. The Helsinki summit caused shock in Washington thanks to U.S. President Donald Trump’s seeming subservience to Russian President Vladimir Putin. Back in the United States, a barrage of indictments gave new force to special counsel Robert Mueller’s investigation of the 2016 presidential election. In a separate investigation, Maria Butina was convicted for trying to influence U.S. politics through her connections in the National Rifle Association. Then there was the poisoning of former double-agent Sergei Skripal in Salisbury, England, and a bizarre subsequent TV interview in which the alleged assassins claimed that they were simply tourists who had flown in from Moscow for the weekend to visit the lovely cathedral city. Twice. The war in Ukraine dragged on for another year but escalated sharply when the Russian Navy attacked three Ukrainian vessels in the Sea of Azov.

Foreign Policy tracked Russia and its role in the world throughout the year. Here are five particularly great pieces to round out 2018.

1. Inside a European Center to Combat Russia’s Hybrid Warfare

European policymakers have also grappled with the question of how to respond to Russian hacking and disinformation. Last year, the European Centre of Excellence for Countering Hybrid Threats was founded in Helsinki with European Union and NATO funds. But will the center meet these lofty expectations?

2. Russia Is in the Middle East to Stay

When Russia intervened in Syria in September 2015, then-U.S. President Barack Obama predicted that Moscow would get “stuck in a quagmire.” Fast-forward to 2018 and, with a little help from Iran, Russia has asserted itself as a significant player in the Middle East once more, writes FP contributor Steven A. Cook. 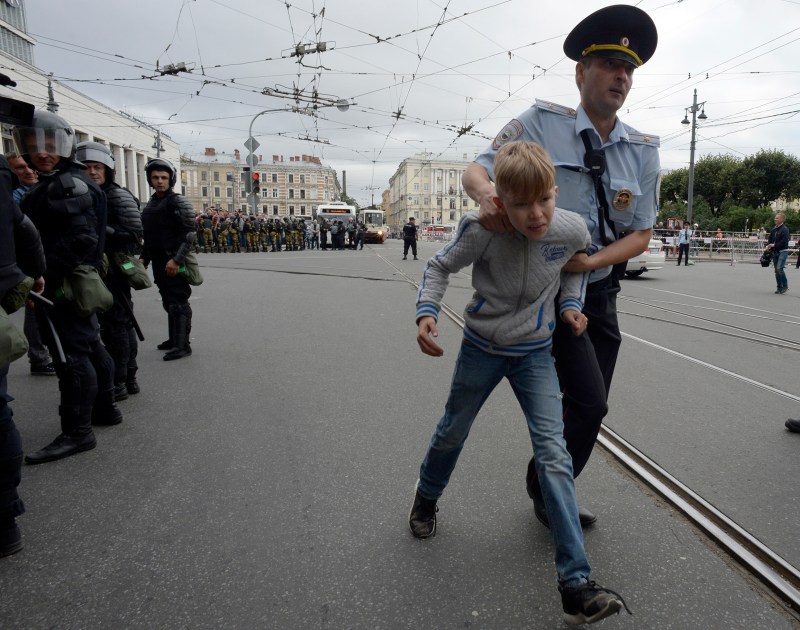 Russian police escort a child away during a protest against planned increases to the nationwide pension age in St. Petersburg on Sept. 9. (Olga Maltseva/AFP/Getty Images)

In a wholly unsurprising election, Putin won his fourth term as president in March. But his approval ratings dropped rapidly after plans to raise the retirement age in Russia were announced. The proposals and the backlash against them were one of the biggest news stories in Russia this year, raising questions about the stability of one of the world’s most powerful regimes.

In October, U.S. Vice President Mike Pence said that Chinese propaganda and mobilization of covert efforts in the United States far outstrip Russia’s efforts. This is a false equivalency, writes FP senior editor James Palmer. While China seeks to set the rules of the game, Russia wants to flip the whole chessboard over.

Ahead of the U.S. midterm elections, a flurry of articles appeared in the Russian media, speculating that the United States could be on the brink of civil war. Their source? An opinion article by conservative pundit Niall Ferguson, who explored political polarization in the United States before concluding that Americans still had a while to go before they turned their guns on each other. But that nuance disappeared when Russian media picked up the story, turning it into a tale of how America was facing doom.