How the ads in a crumbling newspaper offer glimpses of a vanished world.

In the dying years of cosmopolitan Shanghai, as the Chinese People’s Liberation Army marched along its boulevards and Communist Party bureaucrats demanded the keys to its once thriving businesses, one lonely English-language paper still haunted the newsstands.

The Shanghai News was the successor to the North China Daily News, which had once been the most important English-language paper in a country with a thriving multilingual press and four English dailies in Shanghai alone. In anticipation of the closure of the Daily News in March 1951, the owners—the Morris family—launched the Shanghai News. The Daily News staff, at least those who hadn’t already left the city, stayed on, stuck translating and editing copy force-fed to them from Xinhua, the national newswire.

The headlines were classic propaganda, many of them related to the raging Korean War and the banal exchanges of Communist leaders: “U.S.-KMT Slander Denounced,” “Chairman Mao Replies to Ho Chi Minh’s Greetings.” Readers craving the entire text of Soviet Foreign Minister Andrey Vyshinsky’s speeches were not disappointed. In the Shanghai News’s inside pages, every harvest was a record, every factory a marvel of the future, and every woman and peasant liberated.

But in the classified ads, the real story of the Shanghai International Settlement’s final years unspooled. The city had long been a European outpost in China, packed with entrepreneurs, missionaries, and refugees, and protected by the extraterritorial concessions forced on the failing Qing empire in the 19th century by the European powers. Some foreign families had been there for generations. Soon they would all be leaving, whether they knew it or not.

Foreigners were never officially expelled en masse, but their welcome had clearly expired. The businesses that tried to stay faced a hostile regime. Dotted among the paper’s columns were so-called “Public Apologies.” These were a weird fusion of Western corporate public relations and Maoist self-confession, in which foreign companies acknowledged their violations of the new laws. From 1950 to 1952, foreign businesses disappeared almost entirely from the pages, replaced by ads for new state-owned enterprises. 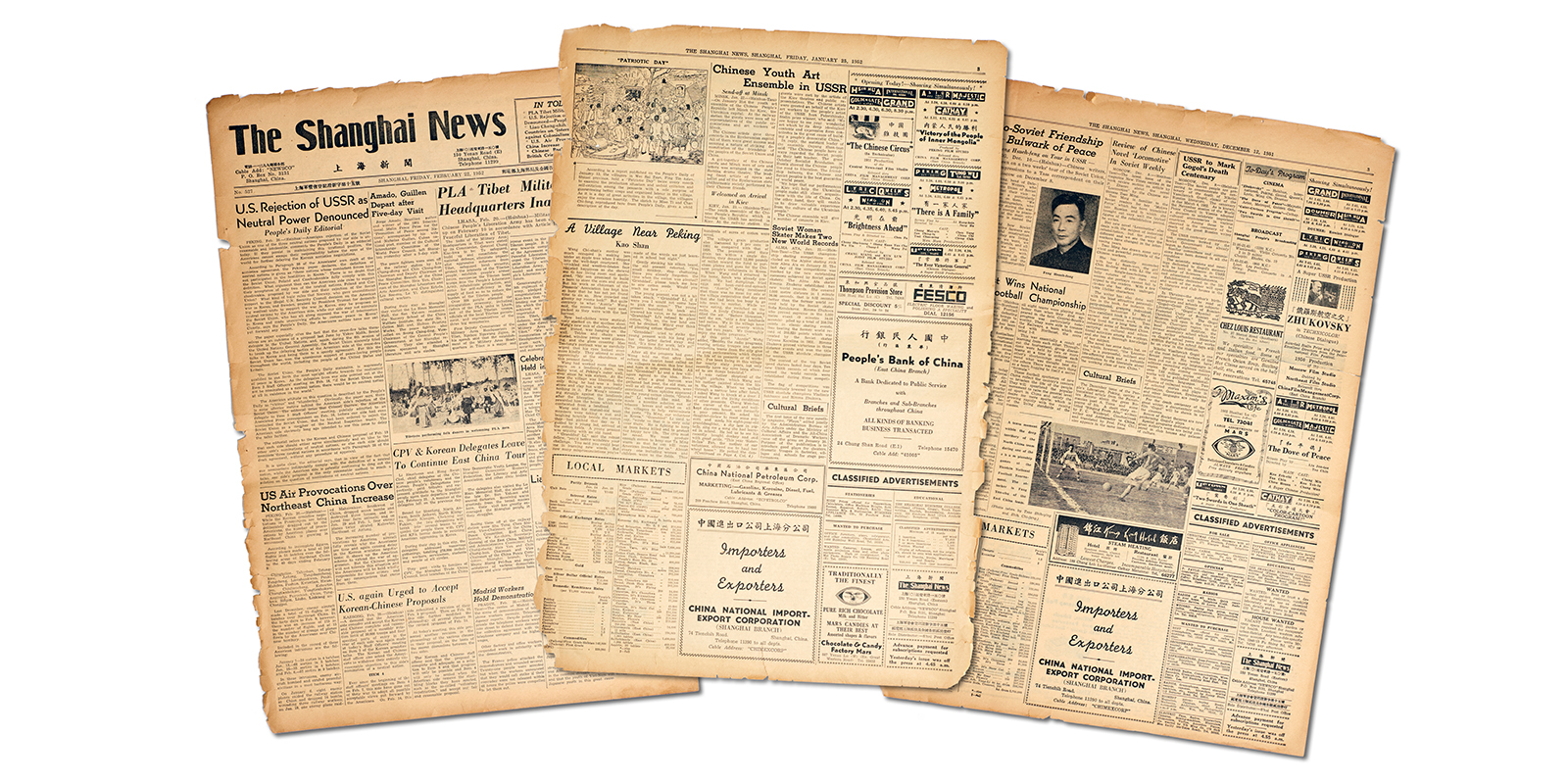 The Shanghai News offered a mix of translated propaganda and insights into daily life for foreign readers in the early 1950s. (Jason Hornick for Foreign Policy)

Yet it was still possible, as of December 1951, to go to the A.A. Ling Ballroom, which promised to be “The Cosiest Night Spot In Town,” to dance to the mambo of “Moro and his Rhumbandidos,” fronted by “the one and only MISS VICTORIA.” A young lady could still have her hair set in waves or doll herself up with imported lipstick. Afterward, she and her beau could eat in the newly opened Andy’s Restaurant, a perfect spot for “Foreign Food And Chinese Tea By Cooks of the Former Foreign Y.M.C.A,” or snack on mince pies and plum puddings at Bianchi’s before going to pick up Christmas cards at Anderson Brothers. The cinemas were still open, but instead of the sultry hits of the 1930s, the golden age of Shanghai film, when local production houses had turned out hit after hit, movie houses now offered such wholesome fare as the Chinese documentary Frontier Fighters and Big Turnip (a Super USSR Production).

All this would be gone in the next few years.

The Shanghai News itself wouldn’t see its third birthday; the Morrises shuttered it over an argument with the government about the Korean War and taxes.

We’ll never know what happened to the “Chinese lady” who taught “Mandarin and Shanghai dialect” or to the ballroom dancing instructors and trained clerks still looking to make a living as the world crumbled around them. The 1957 Anti-Rightist Campaign was coming, a brutal predecessor to the full-blown madness of the Cultural Revolution.

Perhaps one of them, though, preserved these papers hidden from view—until they surfaced in a Beijing flea market 60 years later.

This article originally appeared in the Winter 2019 issue of  Foreign Policy magazine.