Press ‘A’ to Study Harder

A new video game captures the anxiety of Chinese parenting.

My son is hunched over a table stacked high with books, practice guides, and homework. Dramatic music blares as he studies for the intensely competitive gaokao; if he aces it, he’ll earn a place in one of China’s most prestigious colleges. If he doesn’t, he’ll be doomed to mediocrity. Fortunately, I’ve boosted his intelligence score while managing his stress levels and my parental satisfaction—and all of that is tracked by two bars at the top of the screen.

That’s because this stressful multitasking is taking place in a video game. Of course, for millions of Chinese parents, it remains a grueling reality—one rarely depicted in a national media that often portrays child-rearing as a noble national duty. That gap is one reason why Chinese Parents, a PC and mobile game developed by the small Chinese studio Moyuwan and published by Coconut Island Games, has been such a hit. Using keen observational humor, the game frames Chinese child-rearing as an overwhelming marathon. Published in simplified Chinese on Sept. 29, 2018, the game rose quickly to become the second-highest selling title on Steam, the most popular PC gaming marketplace worldwide.

The simulation captures the problems and dilemmas that many urban middle-class Chinese families encounter while attempting to raise a child who is safe, happy, and productive—but who will also make enough money to support his (so far, the game lets you raise only a boy) parents in return. In social media posts about the game, the recurring term used to describe it is guoyu zhenshi, or excessively realistic.

Players are often prompted to reply to the question “Has this ever happened to you?” during the game’s myriad randomized events—which can include your child feeling ignored by a teacher and asking a parent why they aren’t as wealthy as a schoolmate’s family. Many of these experiences touch on questions of class, peer pressure, anxiety, and classic adolescent reluctance to share secrets with parents.

In China, education is a status symbol, economic aspiration, and social safety net rolled into one. The game aptly portrays the question “Where does your son go to school?” using literal one-on-one battles, a visual illustration of the real-life cultural significance of education. This isn’t just about the micromanagement of tiger parenting; the game is also a snapshot of Chinese society at a time of extreme consumption matched with equal anxiety about the future. Even as the country heads into a consumer spending crunch, education, an area where urban parents routinely spend 10 times the country’s per capita disposable income to take a child from elementary school to college, is unlikely to see corners cut. 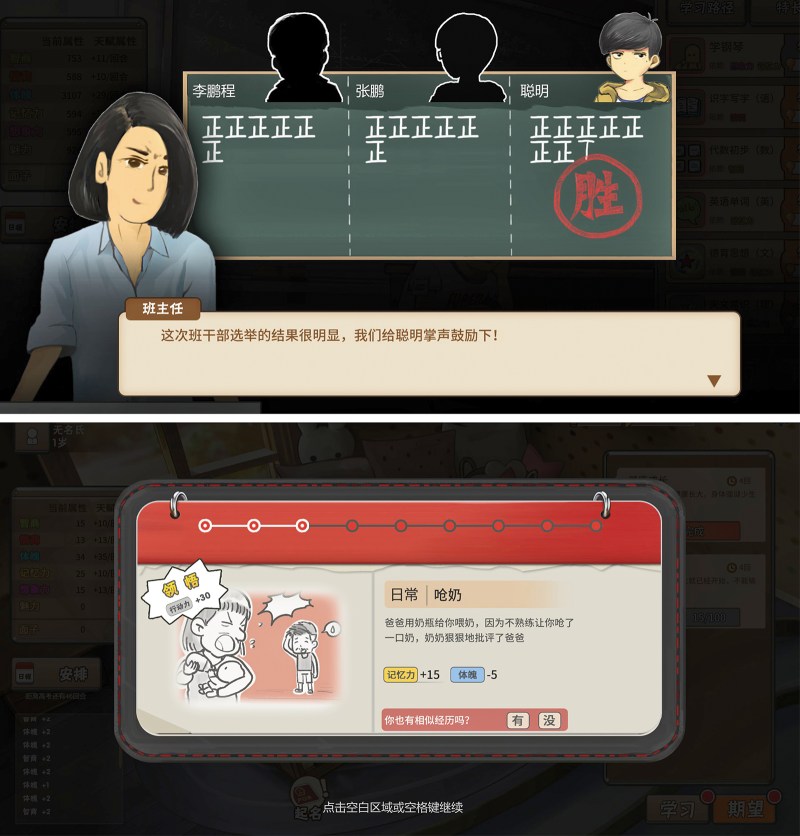 For Chinese parents, spending on kids’ education is one way of showing love—but children also act as a key component of retirement plans. With pensions shaky and care costs growing, an educated child who scores a prime job in officialdom or business is the best bet for a healthy future. Though the one-child policy is now defunct, its guidelines set the norm for the last three decades. That means, pragmatically, most families get only one shot.

Chinese Parents captures perfectly the clash between larger society’s economic limitations and deeply personal financial anxieties. Within the game, attempts to communicate with your digital kid—who is able to dream, doubt, and feel the stress of his increasing course load—help make players more empathetic. The game may also allow young parents to work through and relieve their own anxieties. As one reviewer described the game’s impact on the Q&A website Zhihu: “I’m not sure just how long this game is going to stay popular, but in terms of getting players to consider the real attitudes they face life with … it’s already succeeded.”

The game spans infancy to college. On entering elementary school, two meters—parental satisfaction and personal stress—appear at the top of the screen. From that point, the challenges of balancing the growth of your child’s statistics, such as charm and intelligence, and decisions over what to put in the child’s six activity slots mount rapidly. Lessons, extracurriculars, and tempting out-of-school activities appear as options to slot into your son’s schedule. Visiting relatives and passersby will inquire about just how well a parent is raising her child, prompting one-on-one duels that test the mother’s mianzi (literally “face”), or reputation. Harsh penalties for high stress levels, including your child running away from home, punish tiger parents too eager to cram schedules full with studying and activities.

After receiving his gaokao results, the in-game child is either condemned to the fate of attending a middling college or takes the crucial social-climbing step of enrolling in a first-rate university. The child then eventually finds a partner, marries, has a child of his own, and passes some of his stats over to the next generation. Free online guides and videos walk players who want a cheat sheet through the necessary steps to eventually place their teen into Tsinghua University, China’s top science school, or Peking University, its humanities-oriented counterpart. 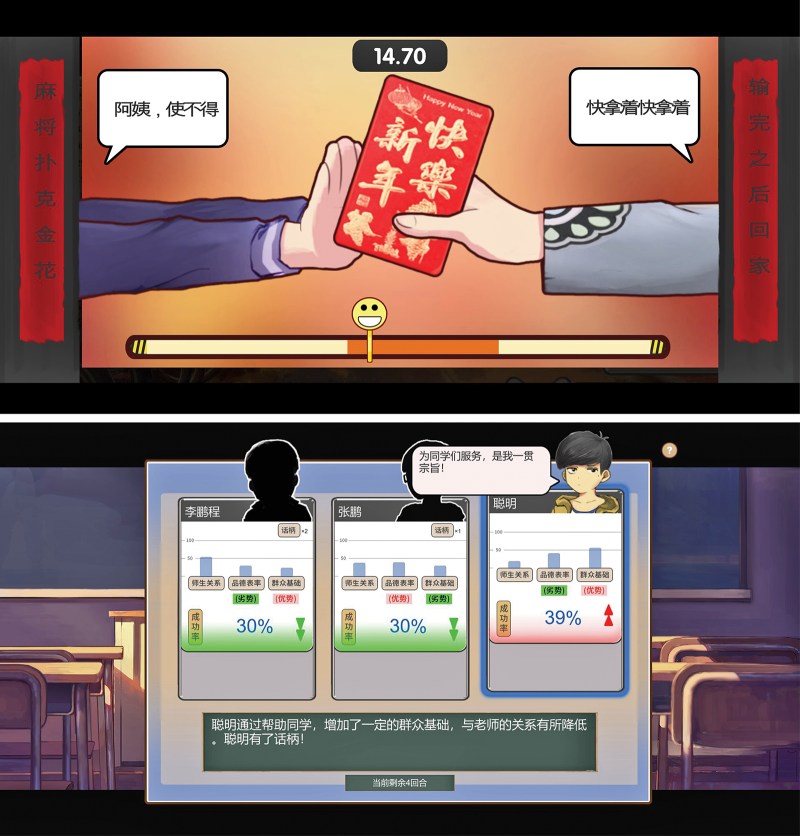 The game has been a surprise megahit. Speaking to the state-run People’s Daily, Yu Ming, one of the game’s developers, commented: “It never came to mind that as of today [Oct. 30, 2018], sales would surpass 500,000.” The studio aims for future updates and plans to add minigames, events, and additional customization options.

Critics have pointed out that there are no other options than a heterosexual male child. Developers have responded that they are planning patches that will allow players to choose the gender of their child for a different gameplay experience. Even so, there are limits to what a parenting game such as Chinese Parents can simulate. Recent discussions have focused on how a game might present the challenges and the even more difficult battle that a migrant worker family would face to get their child into a top school.

Unfortunately, such content probably wouldn’t make it past the censors. At a time when Chinese cultural regulators are cracking down on content with increased levels of scrutiny, integrating police presence into gaming spaces, and freezing the greenlighting process for new software, Chinese Parents’ breakout success has been remarkable. Especially given that Moyuwan provides earnest and relatively accurate social commentary.

Young children attending Mandarin-language lessons have long learned a fable about Mencius, China’s second-most famous philosopher. When he was a child, his mother moved home three times in order to make sure he was surrounded by learning, ensuring that he got what he needed to thrive. Given such tenacity, Mencius’s mother wouldn’t have broken a sweat at Chinese Parents’ toughest levels. Perhaps she wrote the original walk-through.

Rui Zhong is the Program Assistant for the Kissinger Institute on China and the United States at the Wilson Center.

Poetry for the Masses

Night at the Museum

Brussels’s new European history museum could put anyone to sleep.

What Tunisia can teach its neighbors about the value of education.

A New Comic Exposes Racism Amid the Pandemic in Brazil