In Capernaum, Nadine Labaki finds a new way for film to deal with poverty.

Lebanon’s official entry for best foreign language film in this year’s Academy Awards is Capernaum (“Chaos”), a masterpiece set in Beirut’s slums. The film is an exquisitely directed story of a destitute boy and the Ethiopian baby he is left to raise. Capernaum takes two very grim subjects—the plight of refugees and grinding poverty—and manages to turn them into an immersive and unforgettable piece of cinema.

The story begins with the protagonist, Zain (played by Zain Al Rafeea), who estimates he is 12 years old, standing in a courtroom, explaining to a judge that he is suing his parents for the crime of bringing him into the world. The film then dives backward into the hell that was the boy’s childhood, showing viewers why Zain has chosen to take such a drastic step.

The film opens with aerial images of Beirut’s overcrowded, sprawling slums with no sign of the touristic vistas that line the glittering Mediterranean Sea. Born into abject poverty to parents who are petty criminals, Zain and his siblings are denied the chance to go to school and are forced to peddle on the streets and help prepare opioids for their mother to sell. At night, more than a half-dozen children coil together in a pile of bodies to sleep on barely covered mattresses. When his beloved 11-year-old sister, Sahar, is sold into marriage—in exchange for rent relief and a few chickens—Zain lashes out at his parents and runs away from home. As he scavenges for food, he meets Rahil, an Ethiopian woman living in Lebanon illegally. Rahil takes Zain to the tin shed where she lives with her baby son, Yonas. Their financial situation is as precarious as Zain’s, but Rahil is a loving mother and the three become a family, the boys brothers. Things fall apart, however, when Rahil is arrested in what appears to be an immigration raid. Zain is left to fend for himself and the toddler, who’s barely old enough to walk, in the streets of Beirut. He sells drugs, begs for food, and tries to parent Yonas as best he can. At one point, Zain even pretends to be a Syrian refugee so that he can convince an aid agency to give him formula and diapers—a moment that unsubtly underscores the hierarchy of victimhood in a city of need. 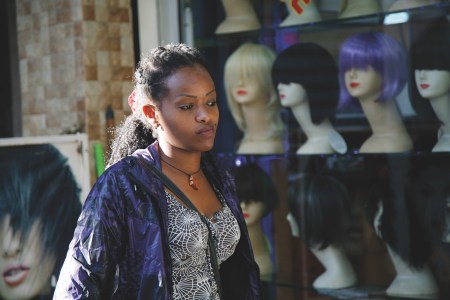 In the past several years, the war in Syria and other major crises have produced a slew of images, many documenting child victims, that have gone viral. First, there was Alan Kurdi, the Syrian toddler whose lifeless body washed up on Turkey’s Mediterranean shore in September 2015 after he drowned while trying to reach Europe. Then came Omran Daqneesh, a 5-year-old Syrian who was photographed coated in ash and blood in the back of an ambulance following a bomb attack targeting rebel-held East Aleppo in 2016. And last October, Amal Hussain, an emaciated 7-year-old Yemeni, appeared on the front page of the New York Times shortly before she died of starvation. Most viewers glanced at the images and moved on.

It is this apathy that Capernaum’s director, the Lebanese filmmaker Nadine Labaki, so ably challenges in this tour de force. Labaki first became a star in 2007 after the release of her debut film, Caramel—a sensual movie shot in a Beirut salon, where five women share stories of heartbreak and sisterhood. After Caramel’s success, Labaki was celebrated across the world as a new voice for Arab women. Now, with Capernaum, she has reintroduced herself as a forceful political artist who has evolved along with her country. 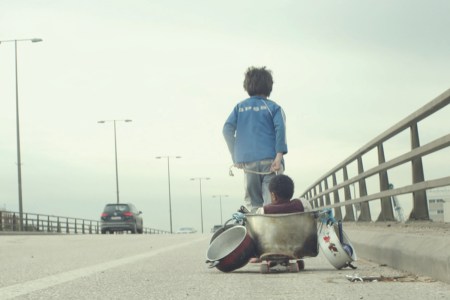 Over the last seven years, even as most Western countries slammed their doors, Lebanon admitted some 1.5 million refugees fleeing the Syrian war. This influx has transformed Lebanon, pushing an already fractured and fragile society to new limits, testing the patience and resources of a small country that is already home to generations of Palestinian refugees. These shifts form the backdrop for Labaki’s profoundly unromantic new movie.

Capernaum is both harrowing and deeply moving. The actors are not professionals; instead men, women, and children who live in the neighborhoods shown on screen were asked to re-enact scenes from their own experiences, often in some of Beirut’s grittiest slums. In a conversation at the Toronto International Film Festival this past September, Labaki said she wanted to make the film as real as possible. So she gave her actors minimal direction and used hand-held cameras to capture daily life in Lebanon’s back alleys and trash heaps. The filmmaker amassed months of raw footage, which she later edited down to just over two hours. The result is the potent illusion of unscripted reality.

Last May, Capernaum won the Jury Prize at the 2018 Cannes Film Festival and has since been nominated for a Golden Globe. In the weeks before its December U.S. release, the film was shown in both New York City and Washington, D.C. At the screening in Washington, the guests gave the film a standing ovation. An audience member asked Labaki whether she thought her film could “do something.” But Labaki’s film has no actionable policy prescriptions; as the filmmaker explained, her hope was that Capernaum would simply shake audiences out of their chronic lethargy.

In fact, Capernaum’s success with international critics and audiences underscores an unsettling truth about how wealthy nations face the world’s refugee crises: Instead of addressing their political responsibility, countries celebrate extraordinary works of art drawn from these stories.

To be sure, Labaki has made a manipulative polemic that inevitably puts its sentiments front and center. But in crafting scenes of extraordinary cinematic power, she has borne witness to two of the contemporary world’s most pressing crises: poverty and displacement. The film already does “do something.” Yet Capernaum, for all its affectations of truth, remains a produced, directed, and highly composed work of artifice. It is a movie about fictional characters, after all. Its success, therefore, is not in doing something but in its ability to remind us to still feel something.

Migrants, impoverished children, and mileslong caravans are now fixtures of the news cycle and therefore also fodder for the imaginations of artists and storytellers. States and politicians have failed to interrupt the cycles of poverty and violence that created the refugee crises in the first place. In indicting his parents, Zain accuses all of us who have the ability to help but have refused to do so. For two hours, Labaki immerses us in his story and forces us to face the chaos that is all too easy to overlook

Will Abiy Ahmed’s Bet on Ethiopia’s Political Future Pay Off?

The Nobel Peace Prize-winning prime minister has disbanded Africa’s largest political party in an effort to reinvent the country’s politics—but some powerful players stand to lose, and they won’t go quietly.

A New Scottish Independence Vote Seems All but Inevitable

India’s Muslims Are Fighting for Their Religion. Should They Display It, Too?