A Jury of Peers

How Ireland used a Citizens’ Assembly to solve some of its toughest problems.

In May 2018, the Irish people voted overwhelmingly to amend the country’s constitution to allow the government to legalize abortion. A bill that made it legal up to the 12th week of pregnancy has passed both houses of the Irish parliament and, at press time, had been sent to the president to be signed into law. It will bring an extraordinary end to a bitter, decades-long national fight over one of Ireland’s most divisive issues.

This seismic change was made possible in large part because of a unique experiment in Irish democracy: the Citizens’ Assembly, a 99-person panel of randomly selected citizens (plus a chairperson) who were assigned to thrash out contentious policy issues and offer recommendations for action to the government. The assembly’s work offered the legislature a means of tackling thorny issues that politicians might have otherwise shied away from and gauging actual public opinion rather than allowing clashing activists to drown out mainstream views. It’s a model that other democracies facing controversial social debates can, and should, adopt.

Democracies are increasingly resorting to referendums to increase public engagement, awareness, and accountability. Yet a referendum alone can produce greater disorder—Brexit is a case in point—rather than resolution. As Ireland’s constitution can be changed only by referendum, the country has discovered that targeted and preemptive deliberative processes among selected groups of citizens, who stand in for the public, can enable better societal reflection before referendums—and thus produce a more orderly and widely accepted outcome.

The Irish Citizens’ Assembly organized a conversation among citizens about public issues, rather than just a hasty, ill-considered vote about them. As in a court of law, the members of the assembly were provided with information from a range of reputable sources, addressed by experts from across the spectrum of opinion, and given the opportunity to question them. They then took part in small group discussions moderated by a facilitator, and a senior judge presided over the proceedings. Lawmakers could then decide to create legislation based on the assembly’s recommendation, offer a constitutional referendum up to the rest of the populace, or ignore the findings.

The Citizens’ Assembly took inspiration from two previous public forums for direct democracy, one in the Canadian province of British Columbia in 2004 and the other in the Netherlands in 2006, both of which tackled the issue of electoral reform. The Irish political scientist David Farrell had observed the Canadian example up close and was impressed by its structured debate, use of evidence, and capacity to engage citizens in technical policy discussions. He, the political scientist Jane Suiter, and several other colleagues decided to export the model to Ireland. In 2011, with a grant of more than $900,000 from Atlantic Philanthropies, they launched We the Citizens, a nongovernmental public assembly focused on policy issues including electoral reform. Participants were selected randomly. Its success prompted the government to set up a second, larger consultative assembly in 2012 called the Irish Convention on the Constitution. Its primary purpose was to tackle the issue of same-sex marriage. One-third of the convention’s members were politicians selected by the political parties in proportion to their standing in parliament; the rest were citizens recruited randomly by a market research company. The aim was to broadly represent Irish demographics in terms of age, gender, social class, and geography. As with the convention’s predecessor, the resulting recommendations had no formal legal standing until legislators acted on them.

The convention invited the public to submit opinions on selected themes—including same-sex marriage, lowering the voting age from 18 to 17, and removing the offense of blasphemy from the constitution. Meetings were held near Dublin; some were publicly broadcast. Its first recommendation was that the government should hold a referendum to introduce same-sex marriage. The legislature agreed. Despite strong opposition from the Catholic Church and conservative groups, the referendum found that 62 percent of Irish voters favored allowing same-sex couples to marry. The government duly enacted legislation, enabling Ireland to become the first country in the world to legalize same-sex marriage by popular vote. And the issue was laid to rest.

In 2016, the new government decided to replace the convention with the Citizens’ Assembly model, dispense with politicians on the panel, and create a body made up entirely of ordinary citizens. The assembly was established by law that same year, given a budget of approximately $2.3 million from the legislature, and tasked with sitting down within six months to assess issues including climate change, referendum procedures, and the thorny issue of the country’s abortion ban. The assembly met 12 times from October 2016 to April 2018; five meetings focused exclusively on abortion. 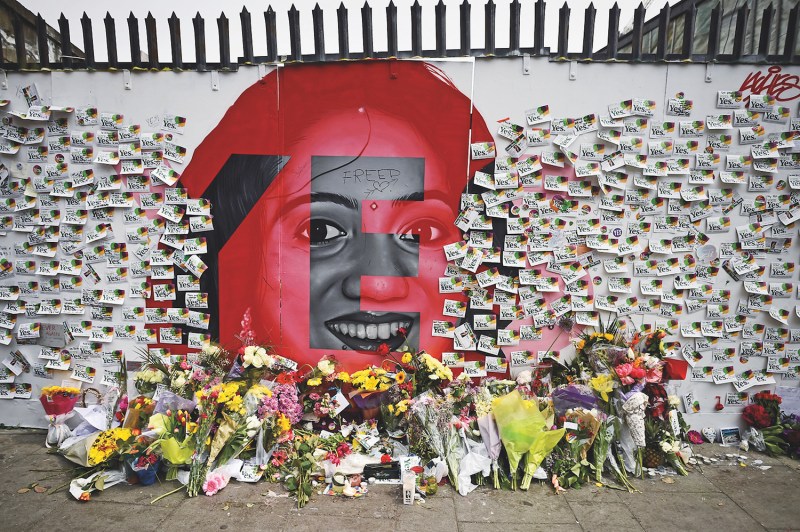 Handwritten messages of support for an end to the abortion ban paper a Dublin memorial to Savita Halappanavar, who died in Galway in 2012 after being denied an emergency abortion, on May 27, 2018. (Clodagh Kilcoyne/Reuters)

Throughout the 20th century, abortion was banned by law in Ireland, which is an overwhelmingly Catholic country. But in the early 1980s, conservative lawmakers pushed for a referendum to have the ban affirmed by a constitutional amendment; it passed in 1983 by a two-thirds majority.

Since 1980, some 170,000 women had voted with their feet by leaving the country (mostly for England) to obtain abortions abroad. This trend—plus a series of tragic cases involving pregnant women, and sometimes children, who were denied abortions—made the ban ever more unpopular. In 2018, polls showed that 65 percent of Irish people favored repealing the amendment.

The debate took a dramatic turn in 2012, when Savita Halappanavar, a 31-year-old dentist, entered a hospital with a dying fetus. She was denied an abortion; the slow-moving miscarriage killed her. Her death galvanized the women’s movement, which held mass demonstrations. In 2016, the government turned the issue over to the Citizens’ Assembly.

After the deliberations on abortion were complete, the chairperson, former Supreme Court Justice Mary Laffoy, held four ballots among the assembly’s participants. Sixty-four percent of the members recommended legalizing the termination of pregnancy before 12 weeks. They called for the government to put the matter to a referendum.

The legislature accepted the assembly’s recommendation and convened a special parliamentary committee to iron out detailed legislative provisions; the results mirrored the assembly’s sentiment. Sixty-six percent of Irish voters agreed that the ban on abortion should be overturned.

With the resulting bill signed into law, debate on one of Ireland’s most contentious social issues will finally be closed. The backlash from anti-abortion groups has been limited, and Irish society has broadly accepted the outcome.

Critics point out that Ireland’s Citizens’ Assembly was purely advisory. But the Irish experience shows that if a government is receptive, an assembly can not only deliver quite dramatic policy recommendations on issues that once seemed intractable but also allow citizens to air differences in a noncombative setting, fostering learning and gradual social acceptance. The model could be widely adapted, including for a potential second Brexit referendum. Ireland is already considering convening another assembly to address antiquated gender roles ensconced in the Irish Constitution. Citizens’ assemblies don’t seek to replace traditional government institutions. They can, when judiciously used, make them work better.

How to Defeat Drought

Cape Town is running out of water. Israel offers some lessons on how to avoid that fate.

The Fix |
Seth M. Siegel
Susan McKay is an award-winning Irish journalist and author from Derry in Northern Ireland. Her books include Bear in Mind These Dead and Northern Protestants: An Unsettled People. She writes for publications including the Irish Times, the Guardian, the London Review of Books, and the New York Times. Twitter: @SusanMcKay15
View
Comments
Tags: Human Rights, Ireland, voting behavior, women’s rights

How to Defeat Drought

Cape Town is running out of water. Israel offers some lessons on how to avoid that fate.

U.S. Daily Death Toll Spikes as Leaders Warn of Impact on the Poor

The Coronavirus Will Destroy Turkey’s Economy

The Coronavirus Could Heal Libya