Dear Pentagon: It’s Not How Big Your Budget Is. It’s How You Use It.

Arguments about defense spending should be focused on foreign policy and what the military actually wants to do.

Over the past two months, unusually public negotiations between the White House and the U.S. Department of Defense on the 2020 defense budget request have bounced from $733 billion down to $700 billion, and then back up again to $750 billion. All of this swamps the Obama administration’s last national defense budget request for FY 2017—$608 billion. And if you think these shifts have been dynamic, just wait until the now-divided Congress takes up the question this spring, “in light of the fact that the current legal cap on defense spending for 2020 is $576 billion (not including Overseas Contingency Operations funding for current military operations). Political and military leaders are throwing around a lot of really big numbers in their public remarks, raising the question: How much does the United States really need to spend on defense? And how will we know when we get there?

The question isn’t being asked correctly. Defense spending should always be a function of foreign policy. The only way to determine how much is enough is to decide what the military needs to be able to do, and how much risk political and military leaders are willing to accept in doing it—or not doing it. Popular measures often cited as necessary to determine the sufficiency or insufficiency of the defense budget (such as the percentage of GDP relative to other countries’ defense budgets) are irrelevant at best and misleading at worst. To get the defense budget right, we need to stop arguing about numbers in the abstract and start having a serious conversation about what the United States wants its military to be able to do. Both defense hawks and defense spending skeptics use these kinds of metrics to support predetermined conclusions for either larger or smaller defense budgets.

Over the last few months, defense officials and members of Congress have described defense spending as both historically high and historically low. Oddly enough, both are correct, depending on what measures you use, but both tell us very little about how big the defense budget should be now.

For example, at the Reagan National Defense Forum this past fall, then-Secretary of Defense James Mattis noted—correctly—that defense spending is near historic lows both as a percent of the U.S. GDP and as a share of the overall federal budget. Mattis used these facts to make the case for sustaining growth in defense spending, a view echoed by many other participants at the forum. 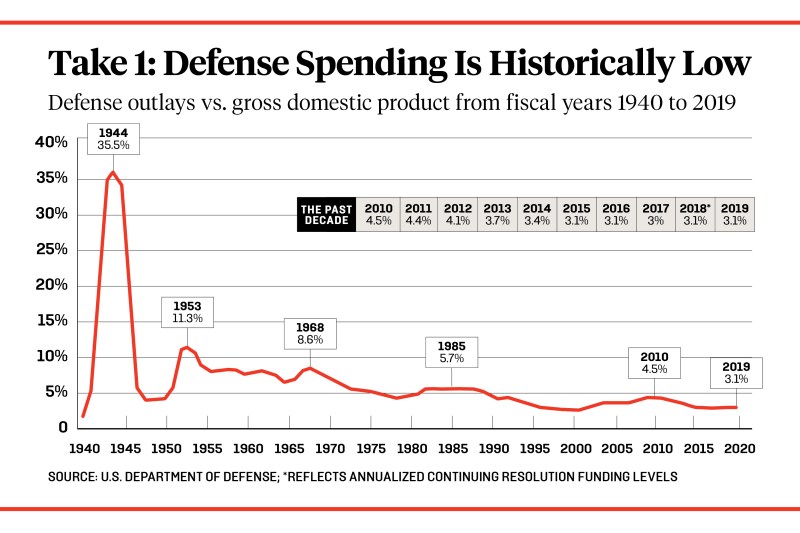 But then, that same week, Democratic Sen. Elizabeth Warren noted that, in absolute terms, defense spending is now higher than it was at during the height of the Cold War under President Ronald Reagan. Defense spending skeptics also often note that the United States spends more on defense than the next seven countries combined. All of this is also true. These facts are usually invoked to make the case that defense spending is excessive and that resources should be reallocated from defense to boost funding for domestic policy priorities. 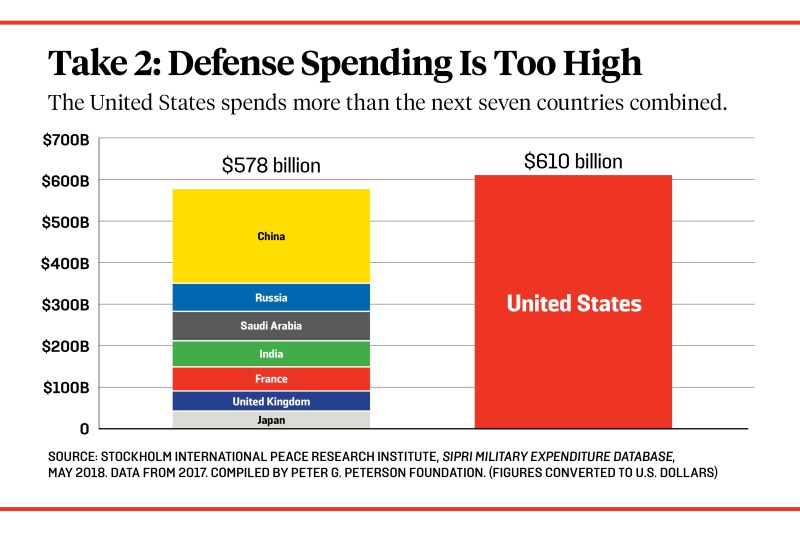 So, what conclusions should Americans draw from listening to these leaders? Is the military dangerously underfunded, as Mattis implied, thus imperiling the safety of the nation?  Or is the Defense Department bloated, crowding out needed investment in other areas of governance, such as health care and education?

All of these metrics are terrible ways to assess the adequacy of defense spending.

To begin with, pegging defense spending to either the size of the economy as a whole or the size of the federal budget is logically incoherent. Just because the U.S. economy grows, it does not follow that the United States needs to spend more on national security. Security is at the base of the hierarchy of needs; it must be funded sufficiently regardless of the size of the economy. As the economy grows, it follows that more resources should be available to spend on things higher up the hierarchy—improving quality of life for Americans through things like education and better access to health care. Similarly, just because our elected officials have decided to spend more money on health care or education or the social safety net and thus increasing the size of the federal budget overall, it does not follow that defense spending should increase commensurately.

Basing the defense spending needs of today on historical spending levels is also unwise. The threat environment, the state of military technology, and the strength of U.S. allies and partners, among many other factors, define different defense spending requirements for different eras. For example, development of more accurate munitions may mean that the U.S. military needs fewer weapons to accurately strike the same number of potential targets. These munitions are in general more expensive per round than older, unguided bombs, but they are also more effective. In other words, a smaller military is not necessarily a less effective military.

Comparing U.S. defense spending to that of other countries is also misleading. As it is currently framed, the U.S. military’s security problem is more challenging (and thus more expensive) than those of America’s adversaries, competitors, and even allies. Projecting and sustaining military power halfway around the world, as the United States does to support its allies in Europe and to assert the freedom of navigation in the South China Sea, is a far more costly undertaking than simply defending home turf. Moreover, China and Russia have the luxury of focusing their militaries against one main competitor (i.e., the United States). America’s present theory of security pursues competition with both emerging powers, while also preventing terrorist activity emanating from the Middle East and North Africa, managing regional challengers such as North Korea and Iran, and keeping an eye on instability in the Americas. Comparisons to Chinese and Russian defense spending are particularly misleading, given consistent underreporting of defense spending by these countries, as well as the far lower cost of military personnel due to conscription and economic factors.

The problem with all of these metrics is that none of them tells us anything about how much defense spending is actually required to address the threats the United States faces at acceptable levels of risk. The size of the economy or how much other countries are spending on defense are largely irrelevant in determining how much the United States should spend on its military.

The only way to responsibly address the needs of the Defense Department is to start with a clear statement of U.S. foreign-policy goals.

Strategists and force planners in the Pentagon routinely work through questions including: How many wars does the United States need to be prepared to fight? Against what kinds of adversaries? And does it need to be able to fight them at the same time? How likely do we think these conflicts are? Which ones are more likely, and where can policymakers take some risk? Working through these questions is difficult and time-consuming, and it often occurs behind closed doors, without sufficient consultation between the Defense Department, the White House, and Congress. Moreover, the process must begin all over again if there is a significant change in policy, an altered threat environment, or significant developments in military technology. But the fact remains that the only way to determine how much the country needs to spend on the military is to work through these questions systematically and in detail. Relying on heuristics like how much other countries spend or an arbitrary percentage of GDP is a recipe for a military that is not sized or shaped to the conflicts it will face.

Moreover, how the Defense Department spends its budget is even more critical than how big that budget is. It is possible to develop a hollow, unprepared, and ineffective force even at $750 billion per year, just as it is possible to have a balanced, capable, and effective military at lower funding levels.

As we await the February delivery of the 2020 presidential budget request and the months of haggling that will come after, let’s keep in mind what really matters in determining how much defense spending the United States needs and ignore rhetoric designed to support a predetermined outcome of either higher or lower defense budgets. We need to stop arguing about top-line numbers in the abstract and instead carefully and fully consider what leadership in the executive and legislative branches want the military to be able to do, now and in the future.

Susanna V. Blume is a senior fellow in the defense program at the Center for a New American Security and was formerly deputy chief of staff for programs and plans to the U.S. deputy secretary of defense. Twitter: @SusannaVBlume

The U.S. president had been calling for cuts in recent months.

Ignore the warnings from Trump, Bush, and the rest. The Overseas Contingency Operations budget ensures that the bean counters at the Pentagon need never worry.

How to Tell What’s Really Happening With the Wuhan Virus