The trade war and new U.S. regulations aimed at China are major factors.

Chinese investment in the United States and Europe dropped sharply in 2018 after a couple of gangbuster years as Beijing seeks to control flows of capital and advanced economies grow warier of China’s economic influence.

Last year, Chinese firms invested just $30 billion in the United States, Canada, and Europe, a stark reversal from the $111 billion invested in 2017 and the $94 billion in 2016, according to new research from the law firm Baker McKenzie and the Rhodium Group.

Chinese investment in the United States and Europe dropped sharply in 2018 after a couple of gangbuster years as Beijing seeks to control flows of capital and advanced economies grow warier of China’s economic influence.

Last year, Chinese firms invested just $30 billion in the United States, Canada, and Europe, a stark reversal from the $111 billion invested in 2017 and the $94 billion in 2016, according to new research from the law firm Baker McKenzie and the Rhodium Group.

The drop was especially sharp in the United States, which is locked in a trade war with Beijing and which is tightening restrictions on Chinese investment. Inflows fell from about $45 billion two years ago to just $5 billion in 2018. And on the year, Chinese firms sold off $13 billion worth of assets in North America.

Regulatory scrutiny of Chinese investments by American officials is producing what Rod Hunter, a partner with Baker McKenzie, believes is an overreaction in the market as investors shy away from deals that may be perceived as politically sensitive.

Amid a trade war between the Washington and Beijing, reforms to American investment regulations aimed at stopping the outflow of critical U.S. technologies, and a slowing Chinese economy, investors in Beijing and multinational firms are examining deals in European and U.S. companies with greater skepticism.

“If you’re sitting in an office in Shanghai, Seoul, Tokyo, or Munich, it’s hard to untangle all of that,” said Hunter, who during the George W. Bush administration oversaw the Committee on Foreign Investment, the U.S. body that examines investments by foreign firms in sensitive American industries. 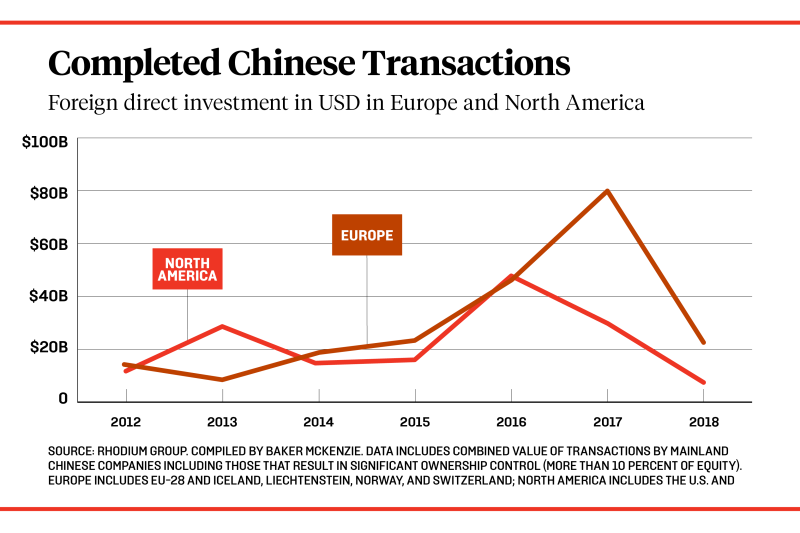 The drop in Chinese investment is noteworthy because Chinese firms have been aggressively expanding in recent years, spending billions of dollars to snap up stakes in established Western firms or start new businesses. Chinese investment has reinvigorated some sectors, such as European ports, while about 140,000 U.S. jobs are directly provided by Chinese companies, Rhodium estimated last year.

The collapse in Chinese foreign investment has two main drivers. First, policymakers in Beijing are still trying to keep a lid on flows of capital out of the country, and debt-ridden Chinese firms are increasingly trying to clean up their balance sheets rather than expand. That explains the wave of Chinese asset sales last year, and another $20 billion in divestments pending for this year in the United States. The pipeline for Chinese investments in North America this year is also nearly empty, with less than $5 billion worth of prospective investments on the table, Baker McKenzie found.

At the same time, both the United States and Europe are redoubling scrutiny of Chinese investments, concerned that Beijing could acquire sensitive technologies or control critical infrastructure, such as ports, power plants, and electricity networks.

The Trump administration has tightened the review process for foreign investments, which led to the cancellation of more than a dozen planned acquisitions and spooked Chinese firms seeking to do business in the United States last year. Government officials, and especially the Department of Defense, have grown alarmed as Chinese firms, many either state-owned or with connections to the Chinese Communist Party, have poured money into advanced technologies such as artificial intelligence and drones.

Legislation signed into law by President Donald Trump last year expands the types of transactions that American regulators can block and allows the United States to examine deals involving a wider range of critical technologies.

Likewise, in Europe, where Chinese investment dropped in 2018 to $22.5 billion from $80 billion the year before, many countries are boosting the scrutiny that they give to deals involving Chinese firms. Big companies such as China Ocean Shipping Company have taken control of ports all around the rim of Europe, for example, while China Three Gorges is finalizing a takeover of the Portuguese electricity grid.

Many big European economies, including Germany, France, and the United Kingdom, have already tightened restrictions, and another half-dozen are planning to do so this year. The European Union as a whole is also seeking to introduce a so-called screening mechanism to regulate the inflows of Chinese money.

With advanced economies getting ready to make major investments in next-generation telecommunications technology, European regulators are considering banning the Chinese telecom giant Huawei from its networks, a proposal that is causing strains between Beijing and European capitals.

In the short term, U.S. restrictions are likely to pack more punch than European efforts to control Chinese investment. That means Chinese firms could pivot to Europe more than they have in recent years, said Frans-Paul van der Putten, a China expert at the Netherlands Institute of International Relations.

“While access to Europe is gradually becoming more difficult, the same process happens in the U.S., but faster and at a broader level. Especially for Chinese foreign direct investment that seeks advanced technology, Europe may actually become more attractive as a destination, compared with the U.S., despite the EU’s new investment screening framework,” he said.

Baker McKenzie noted $20 billion in pending Chinese transactions in Europe, underscoring the appeal the continent still has for both private and state-owned Chinese firms.

For European economies, Chinese investment can bring huge inflows of cash in single transactions. In 2017, a bulk of Chinese investment into Europe stemmed from ChemChina’s $43 billion acquisition of the agribusiness giant Syngenta.

But given growing fears that China’s state-driven economic model could erode European advantages in strategic sectors—Germany in particular was prodded into action by high-profile Chinese acquisitions in recent years—van der Putten expects China to start facing a tougher investment climate in Europe, too.

“Chinese direct investments in European technology and infrastructure may come under greater political pressure in the coming years,” he said.

NEW FOR SUBSCRIBERS: Want to read more on this topic or region? Click + to receive email alerts when new stories are published on Economics, United States, China, Europe

Despite its worsening pandemic, Tokyo’s vaccine diplomacy has gained traction.

Foreign Policy asked nine global experts for their takes on the administration’s agenda.

Yet more turnover at the Pentagon for the administration.