Black Is the New Orange

With Soviet-style illiberalism on the rise, what is there to celebrate on the five-year anniversary of Ukraine’s Maidan uprising?

February marks five years since the end of the 2013-2014 Maidan uprising, which ousted Ukrainian President Viktor Yanukovych in favor of a pro-Western government led by Petro Poroshenko. Ukraine’s post-Maidan government quickly declared its desire to embrace a democratic future and shed the lingering vestiges of the country’s Soviet past.

It was a worthy sentiment: Ukraine is an incredibly diverse nation, composed of numerous ethnicities, cultures, languages, and religions, all of which had been steamrolled by the Soviet state.

But unfortunately, over the last four years, a number of illiberal tactics coming out of Kiev hark back to the Soviet era. Like the Politburo before it, the current government in Kiev has instituted a state-sponsored cult of national heroes across the land, banned books critical of these heroes, intimidated authors and journalists, and used security services to harass houses of worship. The Politburo claimed these methods would protect workers and peasants. Kiev says it does so in the name of democracy.

Under modern Ukrainian democracy, just like communism before it, a carefully curated history of the land itself is used as a tool of the state. Under communism in Ukraine, the Soviet Red Army was glorified for seizing the Reichstag at the end of World War II and liberating Eastern Europe. But it was forbidden to speak of how Soviet liberation was swiftly followed by a brutal Soviet occupation or that Red Army soldiers raped thousands of women across Eastern Europe and Germany.

In 2015, the Ukrainian parliament passed a law officially designating two WWII-era paramilitaries—the Organization of Ukrainian Nationalists (OUN) and the Ukrainian Insurgent Army (UPA)—as “freedom fighters” and made it a crime to express “public contempt” for the groups. The law drew condemnation from Western scholars, as well as the United States Holocaust Memorial Museum (USHMM), and for good reason: The OUN had collaborated with the Nazis and participated in the Holocaust, while the UPA massacred not only Jews but also 70,000-100,000 Polish civilians. In addition to international condemnation, the law is extremely divisive inside Ukraine: The OUN and UPA are reviled in the eastern regions of the country.

It wasn’t isolated. The law complemented ongoing efforts by the government-funded Ukrainian Institute of National Memory, which has been running programs whitewashing and celebrating the OUN and UPA. In 2017, for example, the institute rolled out a campaign commemorating the UPA with events, brochures, and, later, even a board game. The last is an eerie echo of the Soviet Union, which used board games to indoctrinate the cult of the Red Army.

The glorification of the past extended to the SS Galicia, a Ukrainian unit in the Waffen SS. Last April, hundreds of people marched in the city of Lviv to honor SS Galicia. Parts of the crowd made Nazi salutes as they marched. And on May 19, 2017, Volodymyr Viatrovych, the head of the Institute of National Memory, proclaimed these SS fighters were actually “war victims who were forced to spill blood for foreign interests.” That same month Viatrovych stated that the SS Galicia’s symbols did not fall under Ukraine’s law banning Nazi insignia. And the Ukrainian parliament declared the birthday of the infamous Nazi collaborator Stepan Bandera to be a national holiday this year.

In response to all this, the USHMM stated that the institute’s “continuing effort … to praise certain leaders of the Organization of Ukrainian Nationalists (OUN) and the Ukrainian Insurgent Army (UPA) and cleanse their murderous records raises doubts regarding the government’s intentions.”

Last month, Joel Lion, the Israeli ambassador to Ukraine, also took the unusual step of denouncing Bandera glorification, tweeting he was “shocked” by the Lviv region’s declaration of 2019 as the Year of Bandera. Leaders at the World Jewish Congress also expressed concern; CEO and Executive Vice President Robert Singer insisted that “Ukraine has a responsibility to acknowledge acts of genocide and not to glorify those who committed or abetted them, whatever their motivations or rationale.” 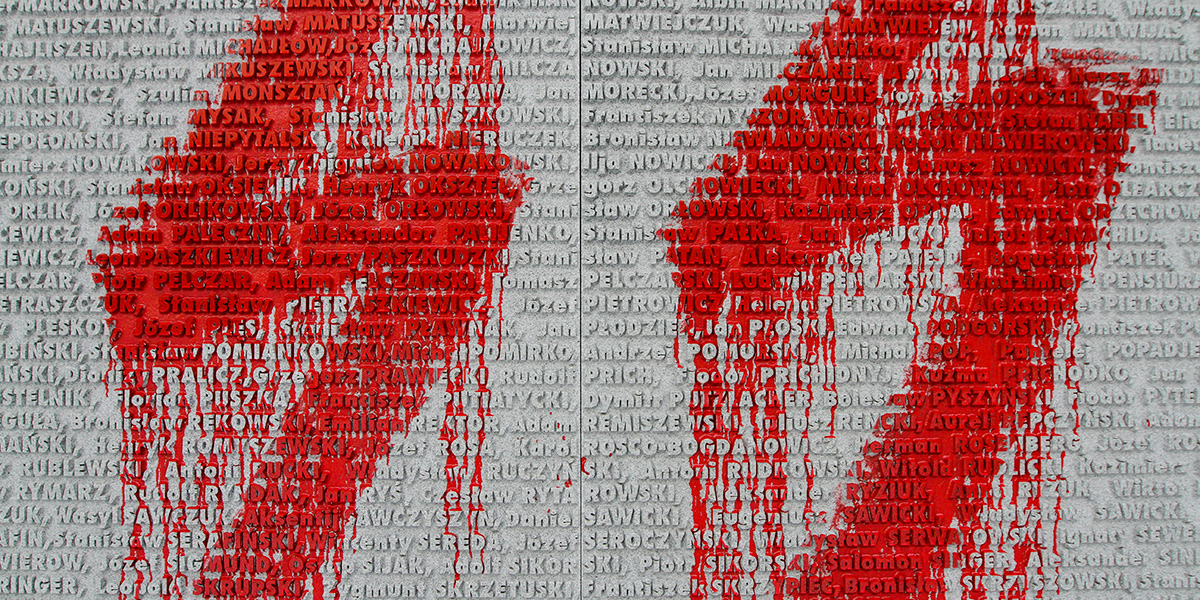 The words “SS Galicia,” “Kurwa,” and “OUN-UPA” are written in red ink on granite slabs at the Bykivnia graves, a national historic memorial on the site of the former village of Bykivnia, on the outskirts of Kiev, on Jan. 25, 2017. During the Stalinist period, the village was one of the unmarked mass grave sites where Soviet secret police disposed of thousands of executed “enemies of the Soviet state.” (Sergii Kharchenko/NurPhoto via Getty Images)

It’s not just historical revisionism that is resonant of the communist past. The Ukrainian government’s State Committee for Television and Radio Broadcasting has banned literature seen as besmirching the state heroes. In January 2018, Stalingrad, an award-winning book by the best-selling British historian Antony Beevor, was banned. Doing so was perfectly legal: A 2016 law permitted bans on importing “anti-Ukrainian” literature from Russia, and Stalingrad was found, however speciously, to fall under that rubric. Beevor’s crime? A single passage that mentioned a Ukrainian group executing 90 Jewish children. (According to the broadcasting committee’s chair, this constituted a “provocation.”) Beevor, an internationally acclaimed scholar, publicly denounced the move, saying that “no state should be allowed to interfere in the writing of history” and calling on academics to stand against “this use of ‘history’ as a form of patriotism.”

The latest scandal arose in December, when the broadcasting committee banned The Book Thieves by the Swedish historian Anders Rydell. The widely praised work, which explores the Nazi looting of libraries, has been translated into numerous languages. The broadcasting committee, as reported by the Jewish Telegraphic Agency, declared that Rydell was “inciting ethnic, racial, and religious hatred.”

This time, the ban was triggered by Rydell’s mention of Symon Petliura, a Ukrainian nationalist leader whose men were responsible for butchering Jews in the early 20th century. Petliura is briefly mentioned in two places: Rydell writes that during Petliura’s rule, “tens of thousands of Jews are believed to have been murdered in more than thirteen hundred pogroms.”

Rydell is not the first to note Petliura’s dark legacy. When the western Ukrainian city of Vinnitsa erected a statue to Petliura in October 2017, Yisrael Eichler, a member of the Israeli parliament, protested, saying that “Petliura was a leader under whose command tens of thousands of Jews were brutally murdered.” The World Jewish Congress denounced the decision to erect the statue as “disgraceful and deplorable,” also citing the “tens of thousands of Jews” murdered. 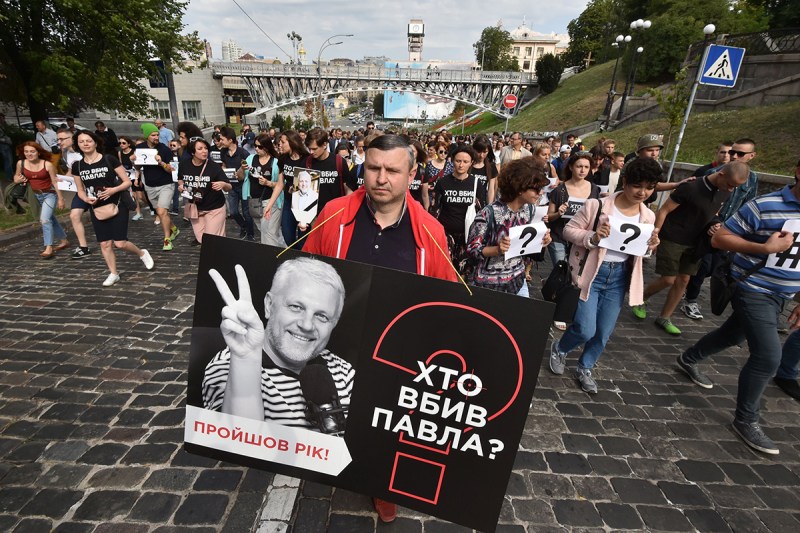 A man carries a sign reading “A year has passed! Who killed Pavla?” during a march in central Kiev on July 20, 2017, to commemorate the death of the investigative journalist Pavel Sheremet. (Genya Savilov/AFP/Getty Images)

Another worrisome sign of Ukraine’s post-Maidan present is the status of the press in Kiev. In May 2016, a Ukrainian nationalist website called Myrotvorets published the personal data of thousands of journalists who had attained accreditation from the Russia-backed separatists in eastern Ukraine. Myrotvorets labeled these journalists, many of whom worked for established Western outlets, “terrorist collaborators”—an extraordinarily dangerous accusation in a nation with a troubling history of unsolved assassinations of journalists, such as Georgi Gongadze, who disappeared in 2000 (a decapitated corpse identified his was discovered months later but only buried in 2016); Oles Buzina, who was shot dead on April 16, 2015; and Pavel Sheremet, who was assassinated by car bomb on July 20, 2016.

Myrotvorets’s 2016 doxing was partially re-posted on Facebook by Anton Gerashchenko, a member of the Ukrainian parliament who called the journalists “traitors,” according to Radio Free Europe/Radio Liberty (RFE/RL). And Interior Minister Arsen Avakov told journalists, “This is your choice to cooperate with occupying authorities,” and posted an “I support Myrotvorets” graphic on his Facebook. Myrotvorets remains operational, despite international condemnation from Western journalists, the Committee to Protect Journalists (CPJ), and the ambassadors of the G-7 nations, who urged Kiev to “ensure that the freedom of the media in Ukraine is upheld.”

This past August, Myrotvorets made headlines once again by adding the Nobel Prize-winning author Svetlana Alexievich, who was scheduled to speak in Odessa, to its list of “enemies of the state.” Immediately afterward, the venue organizers cancelled Alexievich’s appearance, citing threats to her and the venue, as well as fears of nationalists disrupting the event. Alexievich is a fierce critic of Russian President Vladimir Putin and has staunchly championed Ukraine’s national and territorial sovereignty. It didn’t protect her.

In September 2018, Kiev once again drew outrage from CPJ and journalists after a court decision granted the government access to phone data from Natalie Sedletska, an RFE/RL investigative reporter. The request for Sedletska’s records was initiated by the Ukranian Prosecutor General’s Office, which said it was investigating whether the head of the National Anti-Corruption Bureau of Ukraine gave Sedletska classified information about a prosecutor accused of corruption.

The Prosecutor General’s Office’s attempt to seek the records of an award-winning reporter who covered its own corruption led RFE/RL spokeswoman Joanna Levison to state that the court ruling created “a chilling atmosphere for journalists” and went against “Ukraine’s own commitments to promote and protect a free press.” Mustafa Nayyem, a former journalist widely credited with sparking the Maidan uprising, called the development “an example of creeping dictatorship” in a Facebook post after the ruling.

It’s not just the press. Last year, Kiev began the process of creating an independent Ukrainian Orthodox Church, which would be wholly separate from Moscow. The process was completed on Jan. 5, with Kiev getting official recognition from the Ecumenical Patriarch of Constantinople, the spiritual leader of Orthodox Christians.

Ukraine has every right to have a church of its own, especially one freed from the Russian Orthodox Church, which has close ties to the Kremlin. But the use of security services to go after priests is another dark echo of Soviet times, when Moscow tolerated only government-sanctioned churches while suppressing others. 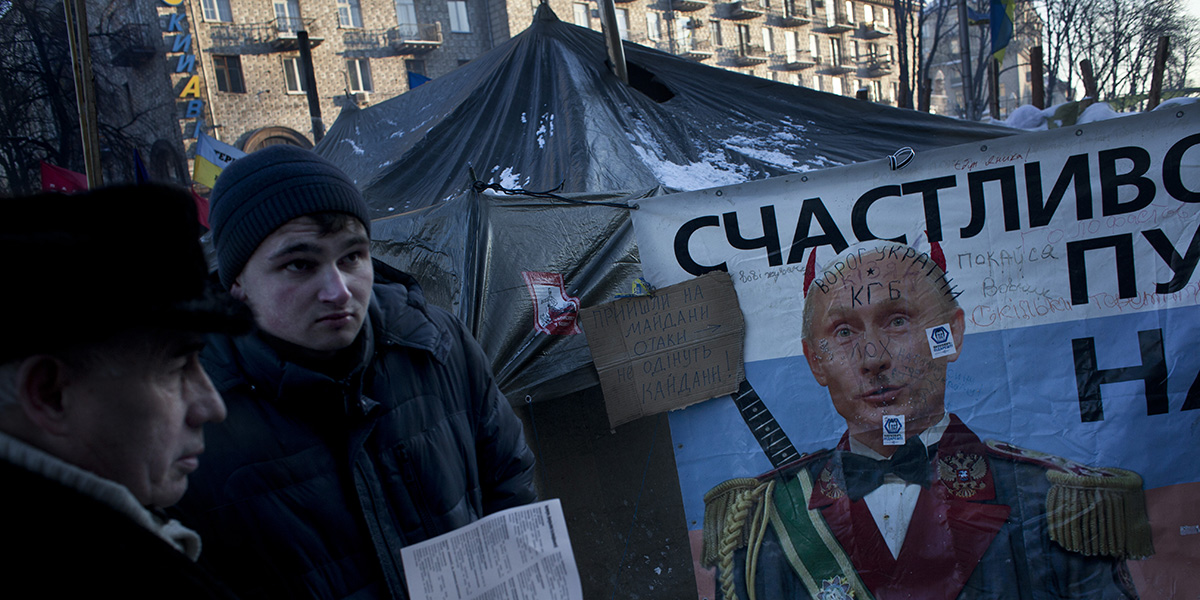 Anti-government protesters stand next to an edited poster of Russian President Vladimir Putin inside the occupied Maidan square in Kiev on Jan. 24, 2014, during the uprising. (Etienne De Malglaive/Getty Images)

All these moves must be placed within the greater context of Ukraine seeking to break out from Russian influence, a goal made even more dire by Russia’s annexation of Crimea in 2014, Putin’s decision to send troops and supplies into eastern Ukraine’s Donbass region (a bloody conflict that continues to this day), as well as Russia’s brazen seizure of Ukrainian ships and sailors in the Kerch Strait last November.

The outpouring of patriotism and the desire to separate from Russia are both natural and understandable. But Ukraine’s current displays of illiberalism are a gift for Putin.

Putin’s Russia has been using the same suppression tactics as Kiev. Moscow has been rehabilitating its own past—in this case, the image of Joseph Stalin. And three years before Ukraine banned Beevor’s Stalingrad, a Russian region banned all of his books, claiming Beevor besmirched the Red Army. Doxing journalists also has a parallel: Last month, the anonymous For Mother Russia group published the names and photographs of all BBC reporters working in Russia. Further, in 2017, Jehovah’s Witnesses were declared “extremists” by the Russian Supreme Court.

Whenever Kiev employs similar methods, it plays into Putin’s assertion that Ukraine and Russia are really the same at heart. The best way for Ukraine to strike back at that colonialist notion is to stop emulating Moscow and prove Putin wrong.