Benjamin Netanyahu’s government has tried to keep the Islamist group in check, but the situation in Gaza is as unstable as ever.

Any discussion of the Palestinian struggle always invokes broader debates concerning self-determination, colonialism, and resistance. An examination of narrower aspects of the struggle certainly can be illuminating but only if it remains very much linked to the wider historical picture. Tareq Baconi’s Hamas Contained: The Rise and Pacification of Palestinian Resistance places itself within this context, attempting to balance the broad with the narrow. The idea of “containment” is key. Baconi’s book straightforwardly summons the Iron Wall concept of force and coercion that Israeli leaders cherish; it is a helpful perspective in discussing Hamas, Palestine, and Israel.

The radical revisionist Zionist and ideologue Zeev Jabotinsky forcefully advocated the concept of the Iron Wall in 1923, arguing that the Arabs of Palestine would never accept a Jewish state created on their land by force. “This colonization [of Palestine],” Jabotinsky wrote, “can … continue and develop only under the protection of a force independent of the local population—an iron wall, which the native population cannot break through.” A metaphor that now has partially materialized in actual concrete, the Iron Wall of Jewish military might, Jabotinsky hoped and predicted, would separate the new Jewish state and protect it against the Palestinians and Arabs, who would keep banging their heads against it in despair. “Every native population in the world,” he argued, “resists colonists as long as it has the slightest hope of being able to rid itself of the danger of being colonized. That is what the Arabs of Palestine are doing and what they will persist in doing as long as there remains a solitary spark of hope that they will be able to prevent that transformation of ‘Palestine’ into the ‘Land of Israel.’”

At the time, Jabotinsky directed his argument particularly against those Zionists who advocated diplomacy and dialogue with the Palestinians. Jabotinsky’s early acknowledgement that Palestinian resistance is fundamentally anti-colonial ironically contradicts the narrow security-obsessed view of the current Israeli government—which claims to be his ideological heir—that Hamas or any form of Palestinian resistance is simple terrorism or aimless violence. 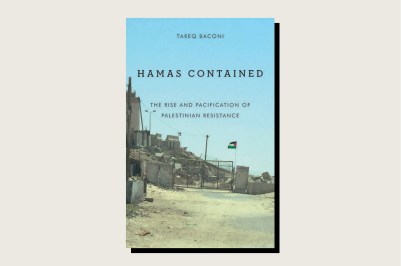 The Iron Wall paradigm has dominated Zionist thought since Jabotinsky’s time, becoming an integral part of the collective psyche of Israeli leaders. Defense ministers, foreign ministers, and prime ministers with military pedigrees brought this toughness into the realm of politics. Leaders without a military background have striven even harder to be no less tough than the first group.

In recent decades, the effectiveness of the Iron Wall has been clear—leading to Egypt, the Palestine Liberation Organization (PLO), and Jordan signing peace treaties with Israel in 1981, 1993, and 1994, respectively—more or less on Israeli terms. Several other Arab states, such as Morocco, Oman, and Qatar, later created various forms of tacit relations with Israel. Presently, relationships between Israel and a number of Gulf states are warming, and they anticipate the exchange of ambassadors in the near future. Against this tide of Israeli “containment” of the Arabs and Palestinians, Hamas stands out—defiant—refusing to recognize and yield to the Iron Wall.

It is within this broader understanding of the centrality (and brutality) of power in Israeli thinking that one better appreciates Baconi’s impressive historiography of Hamas. Leaving barely any literature on Hamas untouched, Baconi’s book is extensively and solidly based on original material in Arabic: leaflets, communiqués, old founding documents and many newer ones, interviews with Hamas officials as well as an extensive reliance on issues of the monthly magazine Filastin al-Muslima, which was considered by many as the unofficial mouthpiece of Hamas for years.

Baconi introduces the concept of Israeli pacification and containment of Hamas. He argues that Israel eventually succeeded in dealing with Hamas by neutralizing its military, pacifying the attitudes of some of its leaders, and containing the threat it posed. This has been far from a complete decapitation or destruction of Hamas, but it has prevented the movement from using its military arm in ways that continually harm or seriously threaten Israel.

Baconi follows Hamas’s evolution from its inception in late 1987 through 2016. Hamas advanced its resistance in the first half of the 1990s in reaction to the PLO’s decision to pursue peace talks and diplomacy that culminated in the Oslo Accords in 1993. For many Palestinians, Oslo was a trap baited with vague promises of Israeli withdrawal and the creation of a Palestinian state. The agreement guaranteed PLO recognition of Israel in return for Israel’s recognition of the PLO as the sole representative of the Palestinians—but not recognizing the Palestinians as a “people.” Hamas protested that Oslo didn’t end the Israeli occupation and reiterated that, as Hamas leader Abdel Aziz Rantissi put it, “the continued presence of the occupation means the continued presence of resistance.”

In response to the killing of more than 29 Palestinians praying in Hebron’s Ibrahimi Mosque by a fanatical Jewish settler (whose grave was transformed into a shrine revered by settlers today), Hamas launched a wave of suicide attacks inside Israel that shocked Israeli society and its leaders. The Oslo Accords collapsed over the following years amid Hamas’s continued military operations and Israel’s expanding settlements.

In September 2000, Israeli opposition leader Ariel Sharon visited Al-Aqsa Mosque in Jerusalem accompanied by armed Israeli police, triggering a major riot and the renewed bloodshed of the Second Intifada. In response, Yasser Arafat and his Fatah movement finally joined forces against the Israeli army, seemingly vindicating Hamas’s resistance approach. Israel responded mightily by crushing the Palestinian Authority and placing Arafat himself under confinement until his death in 2004. During the first month of the Second Intifada, showing the ruthlessness of the Iron Wall concept, the “Israeli army fired between twenty-eight and thirty-three thousand bullets per day against Palestinian stones and light arms,” Baconi writes.

During the Second Intifada, Hamas managed to build a strong military infrastructure, thereby cementing its significance on the resistance and political scene. Mahmoud Abbas succeeded Arafat in 2005, within the volatile regional context of U.S. President George W. Bush’s war on terrorism. Hamas felt politically vulnerable and decided to run for Legislative Council elections in 2006, opting to protect itself by becoming part of the political system. Within the year, a bloody conflict erupted between Hamas and Fatah that resulted in a split at the heart of the Palestinian national movement, with Hamas running Gaza and Fatah and its Palestinian Authority running the West Bank.

Since then, as Baconi masterfully explains, Hamas has found itself caught in the duality of resistance and governance in poverty-stricken, blockaded Gaza, failing to credibly deliver either. In Gaza, Hamas has ruled with an iron fist, suppressing its opponents and imposing religious rules—such as a dress code for schoolgirls, banning alcohol, and prohibiting women from smoking shisha pipes—while bearing the brunt of successive Israeli wars on Gaza in 2008-2009, 2012, and 2014.

“Regional misfortunes,” as Baconi refers to them, resulted in Hamas losing its Syrian backing because of its support for the popular uprising against Bashar al-Assad’s regime. At the same time, Hamas’s relations with Iran dropped to their lowest point. In 2013, the yearlong lifeline provided by then-Egyptian President Mohamed Morsi of the Muslim Brotherhood ended with Morsi’s toppling by the army and was followed by an even more draconian blockade on Hamas from the new Egyptian regime, compounding the air, sea, and land siege already imposed by Israel.

Baconi explores how Israel managed to maintain its containment strategy. Central to this strategy was keeping an undermined Hamas in power—weak enough not to threaten Israel but strong enough internally not only to prevent the situation in Gaza from slipping into total chaos but, particularly, to stay capable of suppressing more extreme jihadi groups that could cause unanticipated troubles to Israel. To achieve this, Israel combined continuous military strikes to keep Hamas’s “lawn mowed short” with disproportionate force and heavy bombardment against civilian areas to maintain military deterrence; thus, Baconi writes, Hamas had been contained.

There is considerable merit in this thesis. However, there are other elements that need to be accounted for as well. It is hard to believe that Israeli right-wing leaders and an increasingly religious establishment would accept a defiant force that is still resisting their Iron Wall and causing a serious (if not existential) threat—demonstrated by Hamas’s niggling tunnels and occasional rockets hitting Israeli cities.

The Israeli military is wary, to say the least, about its achievable options when it comes to dealing with Hamas. The most recent threat of war against Gaza in November 2018, after months of Hamas’s Great March of Return along the Gaza-Israeli border, exposed Israel’s limited options. The possibility of Hamas still being capable of inflicting more harm on Israel has complicated Israeli political and military calculations, creating divisions in the government and the recent resignation of far-right Defense Minister Avigdor Lieberman.

The scenarios on the table regarding Gaza and Hamas include maintaining the status quo, giving Gaza some waterway access, and allowing joint foreign administration on borders while tolerating Hamas rule. These are not necessarily in line with a policy of containment nor likely to coerce a foe to pursue a desirable outcome. Moreover, the humanitarian catastrophe in Gaza is speedily deteriorating and will render the area, according to United Nations reports, uninhabitable by the year 2020. In this light, the continuation of the status quo, the key to containment, is a recipe for an explosion that neither Israel nor Egypt nor any other nearby country wishes to see.

Baconi concludes that after Israel’s war on Gaza in 2012-2013, “Israel again failed to instill lasting deterrence.” Hence, what the world is witnessing now is a sort of half-containment and half-deterrence by Israel over Hamas, while Hamas delivers its half-insurance (against “fresh” jihadis and total chaos) and military half-threats to Israel. This unstable balancing act continues while the humanitarian and political nightmare created by Hamas’s half-government rumbles beneath Gaza.

Khaled Hroub is a professor of Middle Eastern studies at Northwestern University in Qatar, the author of Hamas: A Beginner’s Guide, and the editor of Political Islam: Context Versus Ideology.

Israel has a right to defend its borders, but shooting unarmed protesters who haven’t breached its frontier is disproportionate and illegal.

How the Jewish Left and Palestinian Arabs Can Remake Israeli Politics

Did Camp David Doom the Palestinians?

A new diplomatic history argues that the United States, Egypt, and Israel prevented a Palestinian state from emerging. But leaders such as Yasser Arafat bear much of the blame.