Stand at Attention and Bite the Bullet

The Swedish military had a #MeToo problem. They decided to do something about it.

In 2017, Maj. Hanna Jungwallius, a three-decade veteran of the Swedish Armed Forces, became one of the public faces of the military’s #MeToo moment—hashtagged #givaktochbitihop, which can be translated to “Stand at Attention and Bite the Bullet.” It was a distinctly uncomfortable time for a country that had long prided itself on a military known for gender equality.

In 2017, Maj. Hanna Jungwallius, a three-decade veteran of the Swedish Armed Forces, became one of the public faces of the military’s #MeToo moment—hashtagged #givaktochbitihop, which can be translated to “Stand at Attention and Bite the Bullet.” It was a distinctly uncomfortable time for a country that had long prided itself on a military known for gender equality.

As a spokeswoman for the #givaktochbitihop movement, Jungwallius was joined by Navy Lt. Frida Linehagen, who had fielded unsavory come-ons from older and more senior officers. After their initial TV and radio interviews, Jungwallius and Linehagen were met largely with shock and awkward silence back at their home units. Jungwallius later recalled that her colleagues “didn’t want to look at me. They didn’t know what to say.” Her male colleagues had always thought of their military as a paragon of gender equality. Now, they were realizing a dark truth Swedish servicewomen had long known. The stories shed light on hidden injustices in a military that was just then poised to implement a gender-neutral draft. 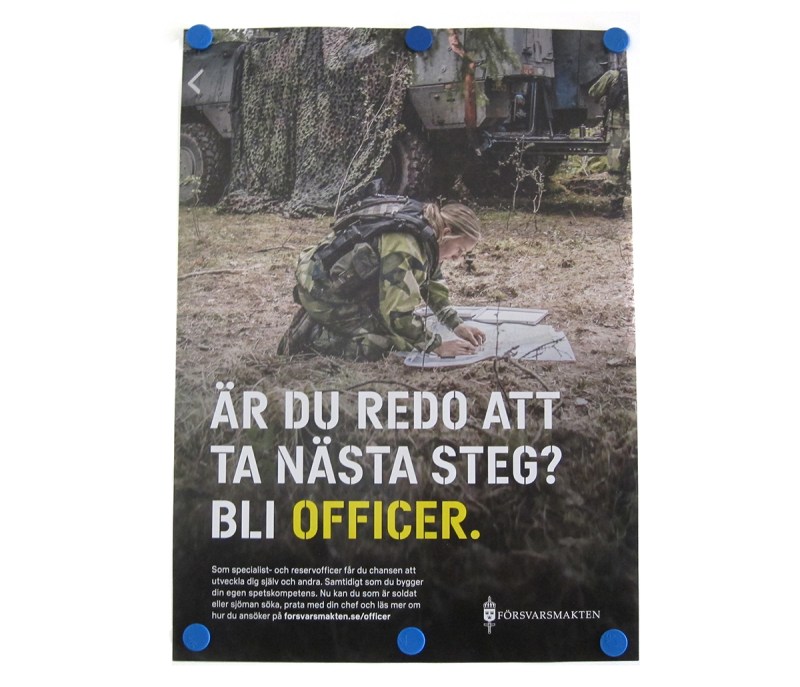 A poster in the recruit barracks asks, “Are you ready to take the next step? Become an officer” in Boden, Sweden, on Sept. 11, 2018. (Teresa Fazio for Foreign Policy)

In January 2018, in response to declining volunteerism and increasing tensions with Russia in the Baltic Sea, Sweden reactivated conscription eight years into an experiment with a volunteer army and 29 years after combat occupational specialties were opened to women. Sweden then became one of only a handful of countries in the world to enact gender-neutral conscription, including Israel and Norway.

It seemed a moment primed for recognizing the import of women in the military. After all, in May 2017, a Norwegian study that analyzed military units with gender parity found that having soldiers of both genders “exposed to each other almost 24 hours a day … seems to lead to enhanced understanding and tolerance between the sexes, in addition to reducing stereotypical biases and sexual tension.”

But the Swedish military was now already grappling with sexual harassment and assault problems. In November 2017, a female Swedish Army veteran, Anna Berkestedt Jonsson, created a Facebook page inviting military women to share their stories of sexual harassment and assault with the hashtag #givaktochbitihop. Jungwallius and Linehagen were among them. Within days, more than 3,000 abuse incidents were reported, and 1,768 female Swedish Armed Forces members signed an article published in the newspaper Dagens Nyheter. The article detailed their experiences and demands for change.

Since then, the Swedish military’s strategy to stamp out sexual assault and harassment has been a multifaceted work in progress, made even more urgent now that 4,000 young men and women have been drafted, with hopes to raise that number to at least 8,000 by 2022. It may be imperfect, but it is an early model to look to for other militaries, the U.S. included: The Swedish military is standardizing reporting procedures for sexual harassment and assault, offering multiple avenues for reporting, and coaching recruits and officer cadets to create more emotionally healthy work environments. 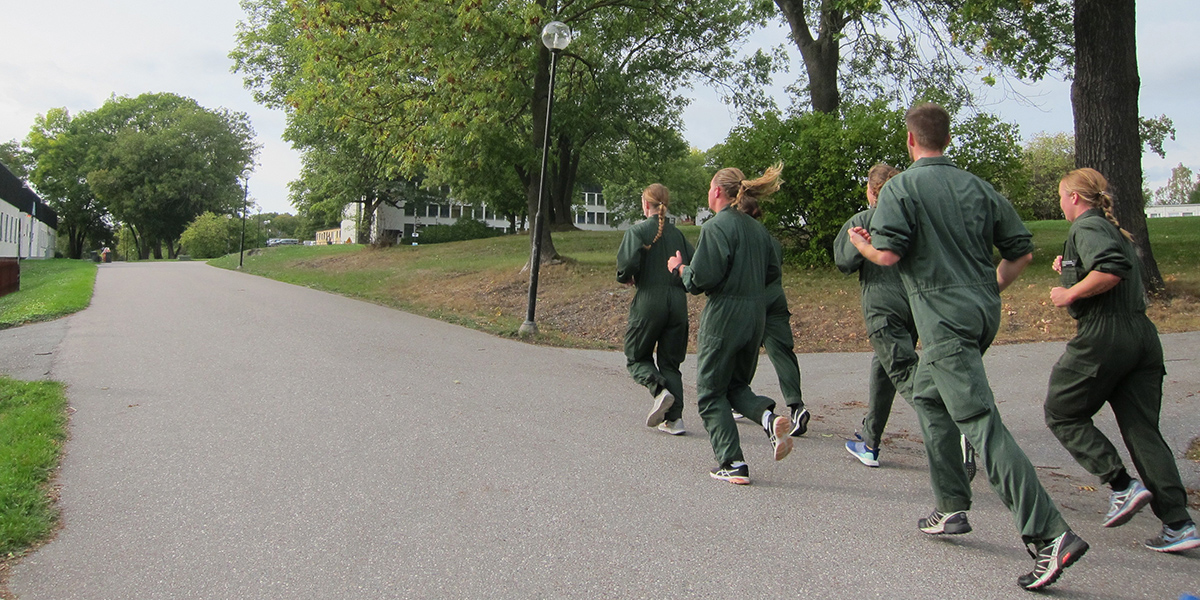 In Sweden’s closely supervised boot camps, male and female recruits must pass the same physical standards and are allowed into any military occupational specialty for which they’re physically qualified, from infantry to reconnaissance units. They share coed barracks rooms and showers, which each have a curtain.

When I visited artillery conscript training in Boden, recruit Liv von Haartman said, “To be a woman here is just like being a man here. … Even in school, you’re treated unequally, but here, you’re not.” At first, changing in her coed, bunk bed-stacked barracks room in front of 14 strangers was uncomfortable, but as they got to know each other, she got used to it. “Your unit is your family,” Haartman said. Recruits also frequently see strong female instructors in charge.

But gender relations become far more complex after recruit training, when junior soldiers are no longer closely supervised or their days tightly scripted. When I spent a day on a Swedish Navy ship, female sailors who had previously been harassed said it was crucial for them to have male allies in the officer and specialist (noncommissioned) officer ranks. At Swedish Defence University, Rear Adm. Ewa Skoog Haslum, the Swedish Navy’s first female admiral, told me she was working to implement two intertwined training tactics: a bystander training program—to encourage men to speak up against harassers—and a demonstration of restorative justice. The latter was inspired by a book tour visit to Swedish Defence University from Emilia Ahfelt Dimitriadis, a Swedish Army veteran and memoirist who had been harassed by male comrades while deployed to Kosovo in 2003. Unknown to her, her former commander was in the audience during her talk. On the spot, he stood up and offered a public apology for not having done a better job of disciplining his troops and responding to her prior complaints. Their emotional reconciliation brought many in the audience to tears. Skoog Haslum plans to have both Ahfelt Dimitriadis and her former commander, who is still on active duty, now tell their before-and-after stories to cadets at MHS Karlberg, Sweden’s equivalent of West Point.

The #givaktochbitihop movement signaled that the Swedish Armed Forces’ structure for disciplining sexual harassment and assault needed immediate change. They are currently in the midst of implementing several reforms.

To begin with, the Swedish military’s mandatory reporting law had a loophole: The chain of command was required to investigate abuses but not necessarily report them higher. Further, the Swedish military did not maintain a database of sexual harassment and assault complaints. Statistics were not derived from mandatory command reporting but from individual responses to the Swedish Armed Forces’ annual human resources personnel survey. In 2017, 17 out of 13,000 survey respondents reported sexual harassment, while 700—about 5 percent—indicated they had been subjected to any kind of abuse. Since anonymity is difficult to maintain, one female sailor told me, many underreport.

Harassment cases were investigated only at the local unit level and not registered in a centralized reporting system unless penalties such as pay docking or administrative separation were required. Since perpetrators sometimes supervised their victims or were friends with victims’ supervisors, the armed forces recognized a need for an investigative entity outside the chain of command. Handling these cases “without coordination prevents the organization from learning from each individual event, seeing patterns and developing adequate measures to prevent harassment and long-term violations,” stated a Swedish military official report from August 2018 titled “Investigation of systematic disposal of harassment, sexual harassment, and offensive treatment.”

Days after the November 2017 Dagens Nyheter article publicized the #givaktochbitihop movement, Swedish Armed Forces Supreme Commander Micael Byden issued one of the strongest statements of support to servicewomen: He recorded a scathing video rebuke to perpetrators, leaving no room to question the need to stop sexual harassment and assault in the Swedish military. He then established a hotline that victims could call to report incidents directly to headquarters.

More is coming. In 2019, a new, centralized system to catalogue and inventory incidents will be implemented, as will an entity outside the chain of command to investigate sexual harassment cases.

Still, there have already been some hiccups. Callers to the hotline must state their name and unit. With no avenue for anonymous reporting, some victims are still reluctant to come forward. And a few commanders who have forwarded their investigations to headquarters complained about long wait times.

After Jungwallius emerged as a spokeswoman for #givaktochbitihop, Armed Forces Headquarters expanded her role as a tactical development officer. In 2018, she designed and ran more than 35 gender education seminars for units spanning the Swedish military.

Though she knows it is a work in progress, Jungwallius plans to serve in the Swedish Air Force a full four decades, after which she will retire. She views promoting gender equality and lowering female troops’ attrition as crucial to increasing operational effectiveness—and to eradicating the institutionalized sexism she’s encountered. Otherwise, she said, two decades down the line, they’ll be in the same spot “because we didn’t connect the dots.”

The warrior mindset will have to fully internalize the link between gender equality and operational effectiveness for the Swedish military to operate successfully, she explained. “When it comes to the crunch, that is what it comes to—can I trust you with my life?”

This project was supported by a grant from the Pulitzer Center on Crisis Reporting.