The Unintended Consequences of Trump’s Decision to Withdraw From Syria

It has already empowered Russia and Iran while undermining the Kurds.

Russia is emerging as the unrivaled powerbroker. The Kurds are facing an existential threat. And Iran is solidifying its position in a country far from its borders.

Those are just some of the unintended consequences of the hasty decision last month by U.S. President Donald Trump to withdraw American troops from Syria, a decision that triggered broad opposition in Washington and prompted the departure of his defense secretary and another top official.

Though the withdrawal is not in full swing—and might not be as comprehensive as Trump envisioned—the decision is already prompting a shift in alliances and interests in country wracked by years of civil war and long the focus of regional rivalries.

Russia is emerging as the unrivaled powerbroker. The Kurds are facing an existential threat. And Iran is solidifying its position in a country far from its borders.

Those are just some of the unintended consequences of the hasty decision last month by U.S. President Donald Trump to withdraw American troops from Syria, a decision that triggered broad opposition in Washington and prompted the departure of his defense secretary and another top official.

Though the withdrawal is not in full swing—and might not be as comprehensive as Trump envisioned—the decision is already prompting a shift in alliances and interests in country wracked by years of civil war and long the focus of regional rivalries.

“By saying we are leaving unconditionally and immediately, all of those parties will make all of their own deals,” said Jon Alterman of the Center for Strategic and International Studies during a Jan. 23 event in Washington. “U.S. interests and U.S. ability to influence what endures was reduced overnight from a reasonable amount to virtually zero.”

Moscow has a strong interest in maintaining influence in Syria, both from an economic and a political perspective, said Dana Stroul, a senior fellow at the Washington Institute for Near East Policy. Syria has long been a lucrative market for the Russian defense and intelligence sectors. Meanwhile, Bashar al-Assad’s survival is a strategic win for Moscow, which has backed the Syrian dictator.

But observers worry that Russia’s elevated position in Syria paves the way for Moscow—and through it, Tehran—to cement its outsize influence in the region, and for Assad to regain the power he had before the civil war began. 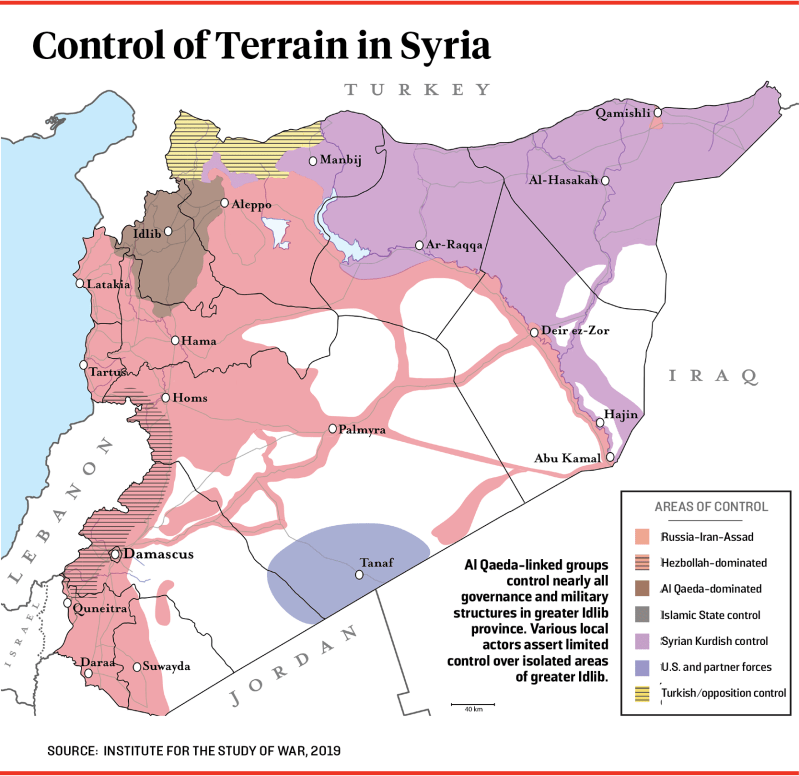 Since the announcement of the U.S. withdrawal, Russia has become the mediator between the Assad regime, Turkey, and the Syrian Democratic Forces (SDF)—a critical U.S. ally in the fight against the Islamic State—in negotiations over northeast Syria. The SDF is predominantly made up of Kurdish fighters, whom Turkey views as an extension of the Kurdistan Workers’ Party (PKK), a U.S.-designated terrorist group, as well as Sunni Muslims.

The fate of the Kurds hangs in the balance. As U.S. troops pull out, the Kurds are more vulnerable to attack from the Turks across the border. By the same token, the group has lost any leverage it had in negotiations with the Assad regime over the region, said Stroul.

“The Kurds are now in an existential situation,” Stroul said.

Making matters worse for the Kurds, Turkey said it would establish a 20-mile “safe zone” between Turkey and the Syrian Kurds in the northeast part of the country. Experts fear such a move would essentially yield that part of Syria to the Turks, leaving Syrian Kurds and Kurdish border towns such as Kabani at their mercy. Last year, Turkish-backed troops plundered the formerly Kurdish-held area of Afrin and have threatened to attack Manbij, an SDF-held town about 20 miles to the east.

Fearing that Turkey will launch an all-out offensive, the SDF has asked Moscow and Damascus for protection.

“We have provided a perfect opportunity for Russia to look like the hero of the day here,” Stroul said.

Putin is pushing for an alternative to Turkish occupation of Syrian soil. In his meeting with Turkish President Recep Tayyip Erdogan this month, Putin pressed for the resuscitation of a 1998 security treaty between Turkey and Syria. For Putin, the goal is to put Assad in charge of the border region.

On Saturday, Syria’s state-run news agency reported that the regime is demanding that Turkey withdraw its forces from Syria before the treaty can be revived.

For the Kurds, dealing with Russia and the Assad regime is the better of two bad options, Stroul explained.

The fate of the Sunni fighters, who are aligned with the Syrian opposition against Assad’s Shiite-backed government, and the Sunni population in northeast Syria is also in doubt. If the Kurds cut a deal with Assad, the majority Sunni areas will likely face isolation or worse from the regime. As they did before the Islamic State sweep of Iraq and Syria in 2014, many disempowered Sunnis could become recruits for the militant group, Stroul said.

Without U.S. support, the SDF itself, an entity created by the United States to sanitize the notion of partnering with the Kurds, could fragment. The Islamic State could seize on that weakness.

“I’m not sure the SDF continues to exist as an organized entity,” Stroul said. “The pressure is probably taken off ISIS, and the campaign doesn’t get completed in a way that would be satisfactory to America.”

Meanwhile, Russia and the Assad regime are looking the other way as Iran quietly exerts influence throughout the country, with the goal of creating a land bridge from Iran through Iraq and Syria to Lebanon. Iran’s leaders are applying soft power, employing strategies from their experience with Hezbollah in Lebanon, where Tehran has entrenched itself “not only militarily, but also politically, religiously and culturally,” write Stroul and Hanin Ghaddar in a paper published by the Washington Institute.

Across Syria, Stroul and Ghaddar write, Iran is purchasing real estate, constructing new Shiite meeting halls, mosques, and schools, and slowly replacing Sunni communities with people friendly to Iran and the Assad regime. It is also transforming local Sunni mosques into Shiite religious centers and shrines, opening Farsi-language centers, and offering high-paying jobs to young, unemployed Sunni residents. Some even opt to join Iran’s militia, for about $200 a month, rather than be conscripted or killed by the Assad regime.

“The Iranians are certainly not sitting back,” Stroul said.

One option for the West is to try to drive a wedge between Russia and Iran, Stroul said. The two may not be exactly aligned but likely realize that working together is in their interest. Both have an interest in maintaining influence in Syria—Iran for the land bridge, Russia for political gain, and both for economic opportunities.

But given the hardened stance the United States, Europe, and other Middle Eastern countries have taken toward both countries, Stroul is skeptical this approach is viable.

NEW FOR SUBSCRIBERS: Want to read more on this topic or region? Click + to receive email alerts when new stories are published on Russia, Iran