Washington failed at the most promising path toward stability in Afghanistan: keeping the country’s women alive.

U.S. officials announced Monday that they had tentatively agreed to the early stages of a plan to withdraw all U.S. troops if the Taliban agreed to keep Afghanistan from “becoming a platform for international terrorist groups,” among other concessions, U.S. diplomat and lead negotiator Zalmay Khalilzad told the New York Times. But while there is a desperate desire for peace after decades of bloodshed, Afghans—particularly Afghan women, who are not yet part of the negotiations—worry that hard-won rights and delicate advancements will be rolled back as a consequence of a hasty U.S. exit ordered by President Donald Trump. And then there are the advancements that have yet to occur.

Despite the United States having spent more than $132 billion on reconstruction in Afghanistan, and an estimated $800 billion on warfighting, the Taliban control more territory now than in 2001. There have been notable improvements in medicine, education, and justice since the days of Taliban rule—a grim baseline from which to measure success—but thousands of Afghans across the country still lack access to the basics. Death during pregnancy and childbirth and breast cancer are still the two leading killers of Afghan women. For women like Parwin, the reality is that Afghanistan still has only one oncologist for the entire nation. This all raises the question: Had the United States invested more in women’s health—and women, generally—would it be leaving behind a nation on a much stronger footing?

What if, 17 years ago, the United States had decided that women were the key to stabilizing and rebuilding Afghanistan, as a growing body of evidence suggests? The United States only spent a drop of the war’s budget on efforts to improve women’s health, economic stability, and good governance programs. “I have no idea why Afghan women’s health concerns aren’t taken seriously by the international community,” said Belquis Ahmadi, a senior program officer with the U.S. Institute of Peace’s Afghanistan program. “If I were a donor agency, that would’ve been top of my list of priorities.” 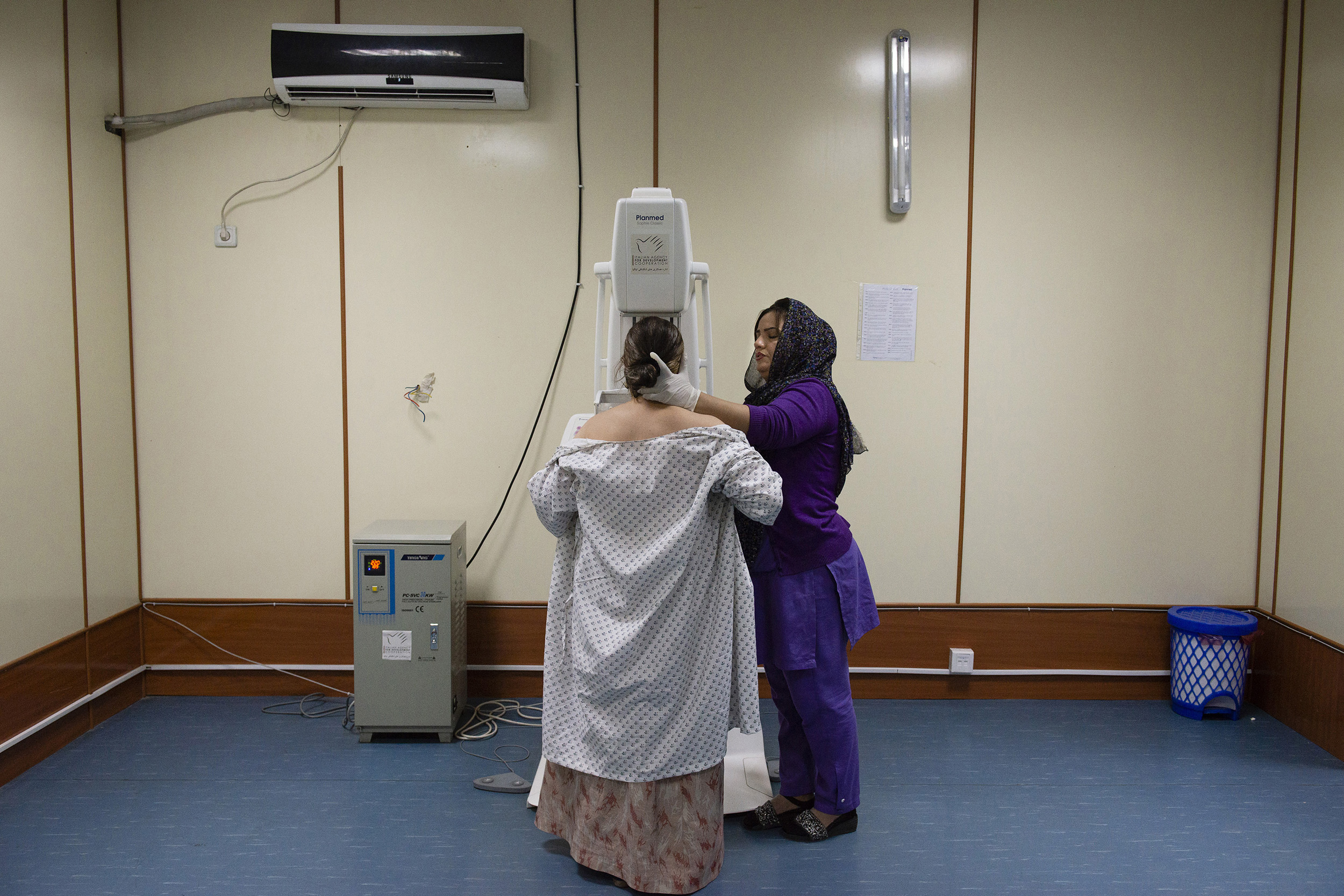 A mammogram specialist positions a patient in front of the machine before she leaves the room at Istiqlal Hospital in Kabul on Dec. 20, 2017. The public mammogram facility is the only one in the country to offer free clinical diagnosis for breast cancer at early stages. (Kiana Hayeri for Foreign Policy)

Maihan Abdullah, the head of Afghanistan’s National Cancer Control Program, has seen firsthand the destabilizing impact of women dying in the thousands of breast cancer. He’s seen children orphaned or neglected due to mothers dying of breast cancer. Those children often end up on the street, he says, resorting to begging to survive and at risk of recruitment by gangs and militant groups. “Whole families depend on a woman,” Abdullah said, especially when war has killed so many Afghan men, leaving women to navigate a male-dominated society.

When the United States has invested in Afghan women’s health—a drop in the pond compared with its warfighting budget—the results have been remarkable, especially efforts to curb the alarming rate of maternal mortality. Even though maternal mortality is still the biggest reason for death among women, the rate of women dying during pregnancy and childbirth has significantly dropped as a result of U.S. and international efforts to support and fund Afghan midwifery trainings and efforts. The World Bank estimates that 1,340 women died for every 100,000 live births in 1990, compared with 396 in 2015, though the accuracy of World Bank and U.S. Agency for International Development (USAID) statistics has come into question. Infant mortality is also down, though still high. Millions more girls are in school, though roughly 40 percent of school-aged kids are still not in school, and at least 85 percent of girls in southern provinces such as Helmand and Kandahar don’t receive an education.

The Afghan government, for its part, has successfully passed laws to protect women, such as the Law on the Elimination of Violence Against Women signed into law in 2009, although it is often not enforced and many women still find themselves without protection. And women, remarkably, make up nearly one-third of seats in Afghanistan’s parliament, though female lawmakers are routinely left out of negotiations and conversations that could determine the future of the country.

Nevertheless, more than 17 years after U.S.-led Afghan militias drove the Taliban out of Kabul, women’s empowerment—touted by the U.S. government as a reason to invade, occupy, and remain in Afghanistan—is still largely seen by Afghan society as a “zero-sum game, and therefore a loss for men,” according to a recent Asia Foundation report. 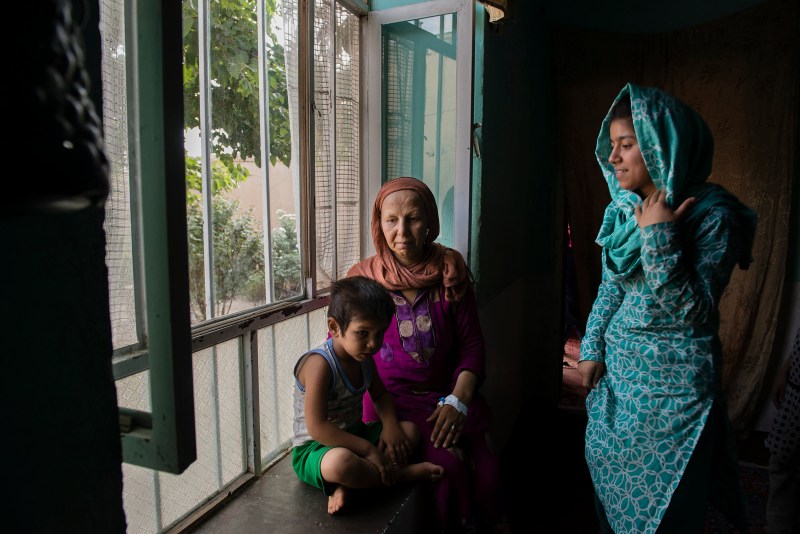 Parwin and two of her children in Kabul on July 17, 2017. Her daughter Fatema recently graduated from high school and wants to go to university to become a midwife. (Kiana Hayeri for Foreign Policy)

One of the major lessons of the last two decades, however, is that security is difficult to foster and maintain when large parts of communities and countries are disempowered and desperate. The most effective strategy for combating terrorism is to bolster economic growth, access to education, and opportunity—and in Afghanistan, women are among the most important vehicles for such economic and social stability. Mothers like Parwin, the rock of her family, are on the front lines of Afghanistan’s war against poverty, illiteracy, and poor health, responsible for fostering the kind of emotional and household stability that experts recognize helps keeps terrorism at bay. It’s mostly mothers who devote their lives to “invisible labor,” such as making sure their children are fed, clothed, cared for, and, when possible, educated—just as it was mothers who educated their daughters in secret when the Taliban banned education for girls and women.

The U.S. strategy, however, for advancing Afghan women’s economic prospects has largely consisted of paying millions of dollars to a litany of contractors and international organizations, many dispatched temporarily to Afghanistan and with limited success, with only minimal focus on bolstering community-led efforts by and for Afghans. A $216 million USAID program called Promote, originally billed as one of the world’s largest women’s empowerment efforts, was slammed by SIGAR, and first lady Rula Ghani herself, for failing to adequately support Afghan women. The program was “Exhibit A in what’s wrong with reconstruction in Afghanistan,” John Sopko, the head of SIGAR, told the Times. Much of the money went to Americans and foreigners flown in to train the women and to the enormous overhead costs to house, secure, and employ Americans in Afghanistan.

These efforts often fail to reach the women who are critical to Afghan stability and in desperate need of assistance. Consider Sherbano, a women in her late 20s who is dying of breast cancer. She discovered a lump while breastfeeding her eighth child, but she found no female doctor near her home in conflict-ravaged Helmand trained to look at the mass. Culturally, Afghan women usually cannot or do not show such sensitive body parts to men who are not family members. Instead, she waited months before finally seeing a female nurse, who described her symptoms to a male doctor. He recommended that she go to Pakistan, where there has been more investment in the medical sector and she could access better diagnostic and treatment facilities, but they didn’t have the money.

Her husband managed to scrape together a few hundred dollars by selling grapes from vines in front of their mud house to get her to Jamhuriat Hospital in the capital. Jamhuriat has the country’s sole oncology ward, where patients sometimes have to sleep two to a bed. There, she waited on the pavement outside for a bed before being diagnosed with late-stage breast cancer—a death sentence. “In our society, cancer means death,” said Zohra Ghior as she walked the blue-walled halls of the hospital. 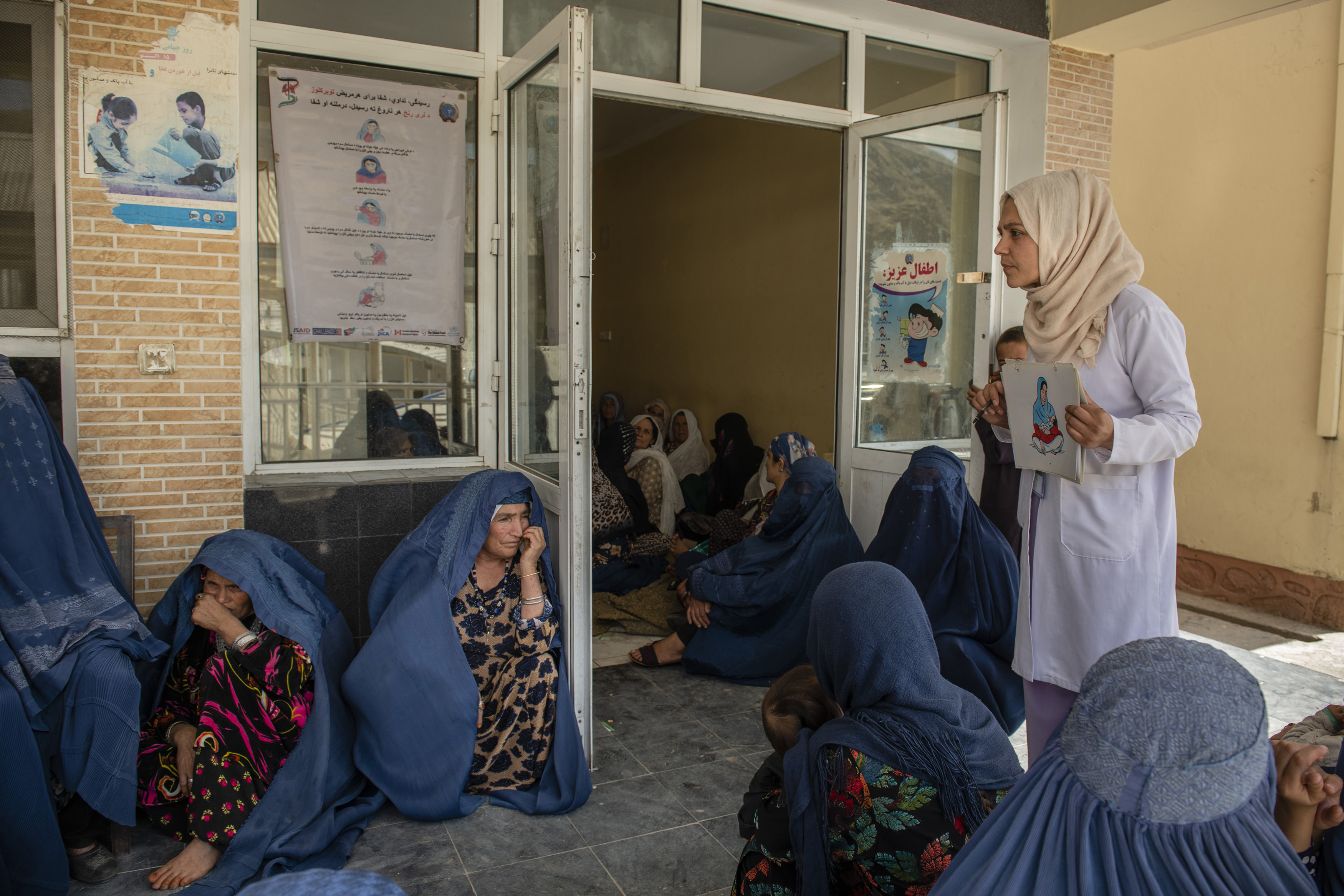 Bahara, a midwife, discusses breast cancer and self-examination at a maternal and pediatric ward at Badakhshan Regional Hospital in Faizabad, Badakhshan province, on Sept. 1, 2018. (Kiana Hayeri for Foreign Policy)

Before this most recent round of negotiations between the United States and the Taliban, the Afghan government and a U.S. health organization called Global Medical Partners moved forward with plans to invest some $25 million in private funding into breast cancer detection and treatment.

Unless something changes for the better, Abdullah says thousands of women will continue to die every year of breast cancer, despite the best efforts of the doctors and nurses who often pay for chemotherapy drugs out of their own pockets to save women.

A rushed peace deal with the Taliban that doesn’t ensure rights are upheld, many Afghans fear, could bring back crushing restrictions on women and society in general. It’s the women like Parwin, Sherbano, and 25-year-old Abida, a mother of five children—four of them daughters—whose deaths will have far-reaching and long-lasting consequences on her family, community, and arguably the entire country. “I’ve left my health to God,” Abida said, an IV taped to her arm as she palmed prayer beads.

Abida might have survived the rocket attack that ripped through her family’s home in Jalalabad years ago, severing four of her toes and covering her body in raised scars. But it’s the breast cancer that will kill her.

Correction, Feb. 1, 2019: The Badakhshan Regional Hospital is located in Faizabad, Badakhshan province. In a previous version of this article, a photo caption mistakenly identified the hospital as being located in Kabul.

Correction, Feb. 2, 2019: An earlier version of this article mistakenly attributed a statistic to the U.S. Special Inspector General for Afghanistan Reconstruction (SIGAR).