Mexico Isn’t Helping Refugees. It’s Depriving Them of Their Rights.

The humanitarian visas offered to migrants don’t allow them to work, study, or receive benefits while letting the Mexican government duck its responsibilities under international law.

GUADALUPE, Mexico—José was riding on the top of a train car in the Mexican state of Veracruz, when bandits derailed the train. Somehow, he was thrown clear, but his two travel companions were partially crushed in the wreckage.

José tried to stanch their bleeding by pressing his T-shirt into their wounds, but he was afraid to call for help. As a migrant who had entered Mexico without the proper documents, he worried that Mexican police might deport them instead of assisting them.

After 15 hours, a nun from a nearby church spotted José and his friends by the train tracks. She rushed them to a local hospital, where doctors diagnosed both of his friends with acute blood loss and several broken bones. Luckily, they survived.

Fortunately for José, the crash was near Las Patronas—a shelter in the town of Guadalupe, La Patrona—that aids migrants who are injured during their journeys. Shelter directors gave José and his friends a place to sleep and helped them apply for “humanitarian visas”—a legal document in Mexico available to “foreigners who are victims of natural disasters or violence.”

On the surface, humanitarian visas seem a wise and generous policy. They ostensibly allow victims to remain in Mexico legally for one year and travel freely, giving migrants the time necessary to recover and regain control of their lives.

But humanitarian visas may not be as humanitarian as they appear—and they offer virtually none of the protections awarded to refugees.

In 2013, Mexico only granted about 250 humanitarian visas to migrants. But in 2014, Mexico created a new immigration program known as the Southern Border Plan, which seeks to detain and deport as many Central American migrants as possible before they can reach the United States. Dozens of new immigration checkpoints were set up in southern Mexico, splintering historic migration routes and forcing migrants to spend weeks or even months trekking through jungles and deserts, dangerous spaces often patrolled by gangs and drug cartels. As a result, the numbers of migrants attacked, kidnapped, and killed in Mexico skyrocketed, and so did the number of humanitarian visas granted. In 2016, 3,632 migrants received humanitarian visas, a more than tenfold increase. 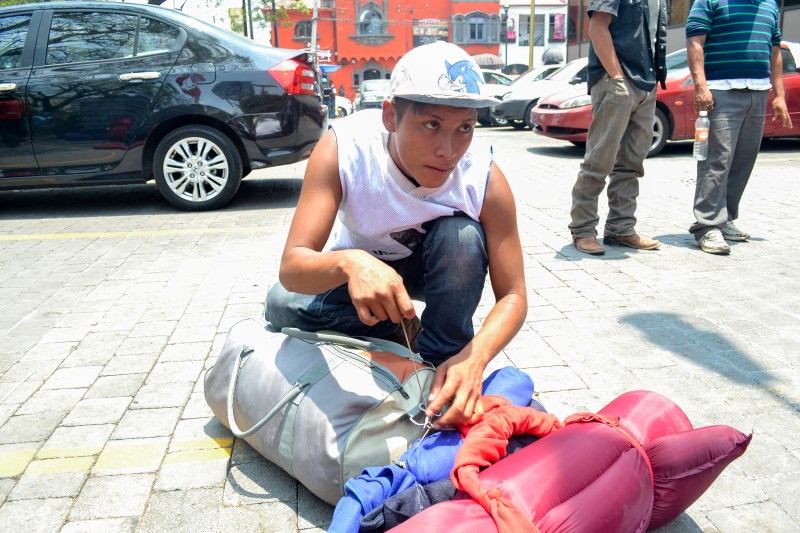 Luis, a 16-year-old migrant from El Salvador, packs his bags outside of Mexico’s National Migration Institute in Mexico City in June 2015. He had just received a humanitarian visa for being attacked by a group of federal policemen. When asked what he would do with it, he said, “I don’t know, maybe go to the United States. They told me I can’t work in Mexico with this document. So if I’m going to work illegally, I might as well make dollars, not pesos.” (Levi Vonk for Foreign Policy)

Here lies the bureaucratic strangeness of humanitarian visas: Migrants only qualify if they suffer extreme violence, but this violence is largely a product of the Southern Border Plan and is often at the hands of the Mexican police and immigration agents themselves. Essentially, Mexico has created a system where the only way many migrants can gain legal status is through physical suffering.

“Mexico has been facing increased pressure by the United States to accept more asylum applicants,” said Maureen Meyer, the director of Mexico and migrant rights research at the Washington Office on Latin America. “And to house U.S.-bound asylum-seekers until they have their immigration hearing north of the border.”

Over 400,000 migrants cross Mexico’s southern border each year. Many flee poverty, government instability, and gang violence in Central America, which led to a 311 percent asylum request increase in Mexico between 2014 and 2016.

The Southern Border Plan has been an attempt to slow this mass exodus at the behest of the United States, but under the 1951 Refugee Convention, which outlines the internationally accepted principle of “non-refoulement,” Mexico is still required to give each person fleeing the opportunity to apply for asylum before being deported, so as to determine that “a refugee… not be returned to a country where they face serious threats to their life or freedom.”

But Mexico’s national asylum office, commonly abbreviated in Spanish as COMAR, has struggled to keep pace with the surge in recent applications. Reviewing applications is expensive, and actually granting asylum is exponentially more so. Asylum recipients theoretically qualify for social services such as housing and health care, adding stress to the country’s chronically underfunded infrastructure.

Once migrants secure a humanitarian visa, however, they don’t receive more support. Humanitarian visa recipients are not permitted to work, study, or receive social services. Many migrants are forced to work under the table for less than minimum wage, which is only about $4 per day in Mexico. Whereas the United Nations High Commissioner for Refugees works with Mexican officials to integrate asylum-seekers into Mexican society—providing them with financial support, legal aid, and safe housing—no such programs exist for recipients of humanitarian visas.

In short, humanitarian visas allow the Mexican government to claim they are ethically addressing a migration crisis while actually shirking the responsibilities of the 1951 Refugee Convention. Humanitarian visas have in fact become a means of deterring migrants from applying for asylum, thereby denying them rights guaranteed under international law.

Such a strategy is similar to the practice of the Turkish government, led by the increasingly dictatorial President Recep Tayyip Erdogan, of giving millions of Syrians fleeing war the bureaucratically ambiguous titles of “brothers” or “guests” in order to deny them the rights outlined in the 1951 convention. Turkey’s recent moves to stop registering new asylum seekers and its ongoing policy of sending some back to Syria has drawn international outcry from human rights organizations but has received little formal pushback from Europe, which has relied on Turkey to deter migrants from reaching its borders, much in the same way that the United States relies on Mexico to detain migrants under the Southern Border Plan.

Yet Mexico’s approach has been subtler than Turkey’s. By swiftly granting humanitarian visas to migrants already waylaid in the country, Mexico can quietly divert thousands of costly asylum resettlements each year without international watchdogs even noticing.

In 2016, COMAR received 8,781 asylum applications but only granted 2,722 of them, just 37 percent. However, another 3,632 migrants were given humanitarian visas. Though it is impossible to know for sure—humanitarian visa applicants are not asked why they left their home countries—it is assumed that many, if not the majority, of applicants also fled for reasons that could potentially qualify them for asylum.

Still, some activists still prefer humanitarian visas over asylum. “Of course asylum is the ideal,” said Norma Romero, the director of Las Patronas, who helped José apply for his visa. “But the process is complicated, expensive, and usually lasts a year or more. And in the end most people are still denied.”

By contrast, humanitarian visa applications only take about three months, and the vast majority are approved. “It’s just sign your name and get a visa,” Romero said. “Plus, humanitarian visas document assaults against migrants. So local police and politicians have to acknowledge that this violence is happening instead of just ignoring it like they usually do.”

Yet this acknowledgement is wholly superficial and does not help migrants’ asylum cases. In fact, many humanitarian visa recipients are shocked to learn that they may be automatically disqualified from asylum in both Mexico and the United States.

This is because asylum is structured as a “last option” of legal and humanitarian relief for those fleeing their countries under extreme duress. If a migrant has already received another form of legal status—which a humanitarian visa technically is—then, in the eyes of international refugee law, they are no longer vulnerable enough to qualify for asylum.

José, who fled Honduras because of gang violence, was not told any of this until after his humanitarian visa was approved. “Everyone told me, ‘You can stay in Mexico’ and ‘You can get a job here,’” he said over a plate of rice and beans at the Las Patronas shelter. “But that’s not true. The only work I can find is cutting sugar cane outside of town, but I don’t get paid hardly anything because I’m a migrant.”

Without steady income, migrants like José often settle in the poorest and most dangerous areas of town, where they are quickly singled out by gangs, cartels, and corrupt policemen. Eventually, many become fed up and set off toward the U.S. border once again. 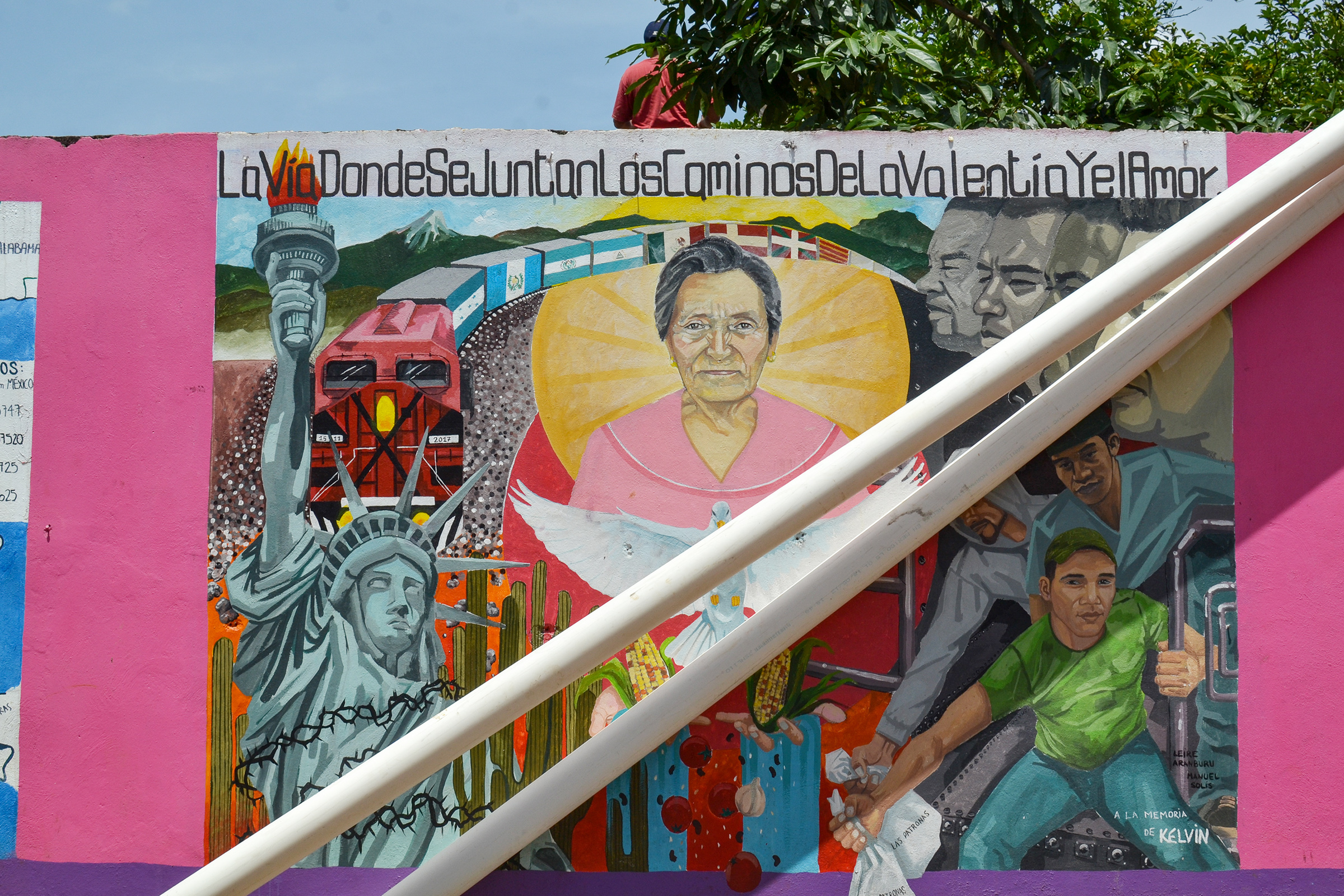 A mural in Las Patronas pictured here in July 2018 depicts Doña Leonidas, the founder of the migrant shelter, encircled by the train La Bestia, which migrants attempt to ride through Mexico to the United States. The inscription reads: “The route where the paths of courage and love converge.” (Levi Vonk for Foreign Policy)

Migrant activist Julio Cesar Campos, while describing the uptick in humanitarian visas in 2015, told me, “We call it la visa vete [the ‘go away’ visa], because it’s clear the Mexican government doesn’t actually want to support these people.”

This is similar to the unsanctioned custom in Greece and Italy, where officials feign strict border security but look the other way in practice, knowing that most refugees wish to only pass through in order to settle in wealthier northern European countries such as Germany or Sweden.

Even if humanitarian visa recipients do stay in Mexico, the visa expires after one year, leaving migrants without documents again. Visa recipients are eligible to renew their visas, but the paperwork is complex and time-consuming, and applicants have to resubmit documents from their home countries—nearly impossible tasks for a population that is usually fleeing for their lives and has, on average, an elementary school education.

It is unclear if Mexican officials at COMAR or the National Institute of Migration, which grants humanitarian visas, are aware of the large-scale suffering that humanitarian visa recipients face in Mexico. No government officials responded to inquiries for this story.

There is one bright spot: This past November—after Mexico’s new president, Andrés Manuel López Obrador, faced international pressure to accommodate the most recent caravan that arrived in Tijuana—the Mexican government began granting caravan members work permits in conjunction with their humanitarian visas. It is unclear, however, if the vast majority of Central American migrants in Mexico who did not march with the caravan will receive the same treatment. Caravan members I spoke with were also confused as to what rights a humanitarian visa would grant them, and several had no idea that it may actually disqualify them from asylum.

Even from the perspective of nativists such as U.S. President Donald Trump, it is hard to see humanitarian visas as anything other than a ticking time bomb. By delaying migrants in Mexico, marginalizing them, and forcing them to live in poverty, humanitarian visas will only make a huge swath of migrants more desperate to eventually cross into the United States.

Today, José is uncertain about his future in Mexico. “I don’t make enough money to live here,” he said. “And after a year in Mexico my visa will run out. I’ll have to go to the U.S. for a decent life.”

Levi Vonk is a freelance journalist and a doctoral student at the University of California, Berkeley. Twitter: @VonkLevi