Pakistan Has No More Excuses for Supporting Terrorism

A murderous attack in Kashmir rocks relationships throughout Asia.

On the afternoon of Thursday, Feb. 14, a massive explosion rocked a Central Reserve Police Force (CRPF) convoy in Pulwama in the Indian state of Jammu and Kashmir. At least 40 personnel belonging to the CRPF—a 300,000-strong paramilitary force under the Ministry of Home Affairs involved in law-and-order and counterterrorism duties—were killed as a suicide bomber drove an SUV reportedly loaded with about 600 pounds of explosives into their bus. Jaish-e-Mohammed, a terrorist organization based in Pakistan, has claimed responsibility for the attack, and the group’s role has been confirmed by Indian officials. The assault comes weeks before India’s general elections, which are expected to be held in March and April.

The next morning, India’s Cabinet Committee on Security—consisting of the prime minister and four senior ministers—held an emergency meeting and, as a first step, announced the revocation of “most favored nation” trading status for Pakistan. India had granted this status to Pakistan in 1996, although Pakistan had never reciprocated. But this is just one of the retaliatory measures likely to be taken after the worst act of Islamist terrorism in India since the Mumbai attacks in 2008.

Culpability for the attacks is unambiguous. For decades, Islamist terrorists belonging to groups like Jaish-e-Mohammed and Lashkar-e-Taiba have benefited from recruitment, financing, training, and other forms of support provided by Pakistan’s security establishment. Groups targeting India and Afghanistan continue to operate with relative impunity inside Pakistan, which has only cracked down on militancy against the Pakistani state. In Jammu and Kashmir, cross-border infiltration has been facilitated by Pakistan’s Inter-Services Intelligence directorate—its primary external intelligence agency, run by the military—and the Pakistan Army, which provides cover in the form of artillery and gun fire across the Line of Control separating Indian- and Pakistani-held territory.

Despite the highs and lows in India-Pakistan relations over the past two decades, there is no evidence that Pakistan has made serious attempts at dismantling this terrorist infrastructure. Although the frequency ebbs and flows, cross-border infiltrations continue on a regular basis: Most of these terrorists are quickly stopped or neutralized by Indian security forces, and those attacks that have been successful—including the one at Uri in 2016—have generally benefited from negligence or a good deal of luck. Given that Jaish-e-Mohammed claimed responsibility for Pulwama, and the group operates openly on its soil, Pakistan cannot rely, as it has in the past, on ambiguity and plausible deniability to deflect responsibility for this attack. 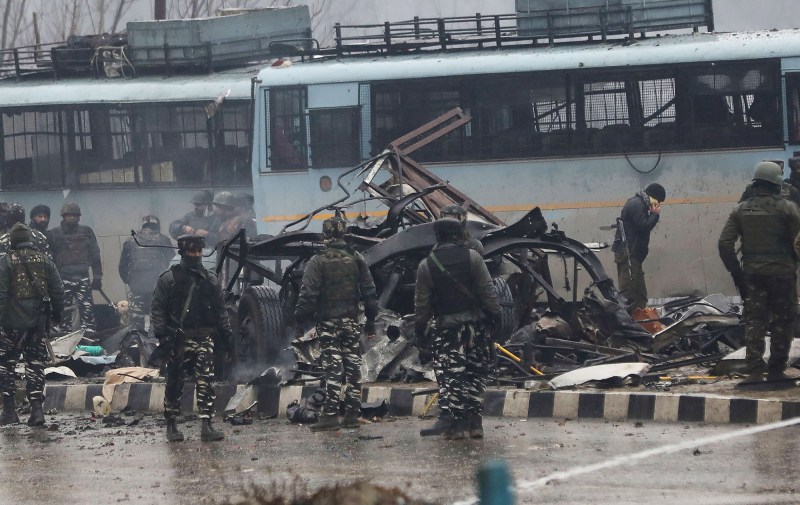 Indian security forces inspect the remains of a vehicle following a deadly attack on a Central Reserve Police Force convoy near Awantipur in the Pulwama district of Kashmir on Feb. 14. (STR/AFP/Getty Images)

Pulwama marks an extension of recent trends concerning terrorism in India. Despite several high-profile incidents in recent years, the frequency and severity of terrorism in the country have witnessed a steady decline since 2002 and are well below the highs of the 1990s. More than 1,000 civilians were killed in terrorist attacks each year in India between 2005 and 2008. That has dropped to about 200 annually since 2015. In Jammu and Kashmir alone, civilian and security fatalities from terrorism declined—largely as a result of international pressure and improved security—from an estimated 1,700 in 2001 to 285 in 2007 and 33 in 2012. The numbers have subsequently climbed back up to 181 last year, in part as a consequence of agitations in the Kashmir Valley after July 2016 and Pakistan’s decision to try to take advantage of the situation.

The nature of terrorism in India has seen fundamental shifts over this period. Between 2000 and 2008, as violence in Jammu and Kashmir steadily declined, Islamist terrorist attacks began to occur with alarming frequency in major Indian cities. The fatalities mounted, with between 20 and 200 killed in attacks in Mumbai in 2003; New Delhi in 2005; Varanasi and Mumbai in 2006; Hyderabad in 2007; and Jaipur, Ahmedabad, New Delhi, and Mumbai in 2008. Another spate of smaller attacks occurred between 2010 and 2013 in Pune, Mumbai, New Delhi, and Hyderabad.

But since that time, the targets have shifted to primarily military and security facilities and away from major civilian and population centers. This, presumably, was intended by Pakistan to minimize international attention and censure and project such acts of terrorism as part of an unconventional military campaign. Thus, an Indian Air Force base was the target at Pathankot in January 2016, and an Indian Army post was attacked at Uri later that year. India responded to the latter incident with a series of coordinated retributive attacks across the Line of Control, which became known in India as “surgical strikes.” With an assault on the CRPF convoy, the trend continues.

Pakistani Prime Minister Imran Khan rose to power with support from the country’s powerful army. Like his predecessor, Nawaz Sharif, he has attempted to internationalize the Kashmir issue, in part to cater to various domestic constituencies. If there was any expectation that Imran’s elevation might offer India the opportunity to turn a new leaf on the relationship, that will now diminish, no matter what the outcome of the forthcoming Indian general election.

But the attack also has implications for Afghanistan, where India is already nervous about a probable U.S. military drawdown. Jaish-e-Mohammed has old connections to the Taliban and al Qaeda. In 1999, Masood Azhar, the leader of Jaish-e-Mohammed, was released from Indian custody as part of a hostage exchange in Taliban-controlled Kandahar, following the hijacking of an Indian Airlines aircraft with 173 passengers and 15 crew on board. From Taliban-controlled territory, he was whisked back to Pakistan, where he returned to the business of terrorism. His organization was soon involved in the December 2001 attack on the Indian Parliament, which resulted in a massive Indian military mobilization the following year against Pakistan.

This standoff provided a pretext for Pakistan to move military assets away from its western frontier to its eastern border with India, a move that enabled the exfiltration of Osama bin Laden and other al Qaeda leaders from the caves of Tora Bora in Afghanistan into Pakistan. This history has resonance today, as the United States engages in negotiations with the Taliban on the future of Afghanistan. Pulwama underscores the continued dangers for India of terrorist safe havens in Afghanistan and Pakistan, and New Delhi is unlikely to be persuaded by the ongoing attempts to normalize the Taliban and its sponsors.

The story goes even further than that. India has been trying to rally international efforts to have Azhar listed as an international terrorist by the United Nations. While its efforts have been supported by the United States, United Kingdom, and France, they have been repeatedly blocked by China. China’s obduracy further exposes Beijing’s double standards: While China points to Islamist terrorism to justify imprisoning more than a million Uighurs in camps in its western region of Xinjiang, it continues to protect Pakistan on terrorism. Pulwama may generate further Indian skepticism about China’s bona fides at a time when Beijing was hoping for a continued thaw in relations.

With the Indian elections around the corner, there is also a domestic angle. The Narendra Modi government has highlighted the decline of terrorist incidents on its watch, and that certainly applies to major urban centers and the country as a whole. But violence in Jammu and Kashmir has picked up somewhat since 2016, with India’s security forces continuing to bear the brunt of it. It seems irresponsible to try to predict what retributive actions may follow in the coming days, weeks, and months. For now, largely leaving aside overt partisanship, India’s leaders have been united in standing behind the country’s security services.

Dhruva Jaishankar is Fellow in Foreign Policy Studies at Brookings India in New Delhi and the Brookings Institution in Washington DC. He is also a Non-Resident Fellow with the Lowy Institute in Australia.

A World Without War

A new book argues that America’s massive military is predicated on imaginary threats—and we’d all be better off without it.

America Is Going the Same Way as the Soviets in Afghanistan

The Soviet withdrawal was a disaster. The U.S. version looks eerily similar.

A U.S.-Pakistan Reset Just Got a Lot Harder

The acquittal of Daniel Pearl’s abductors came at the worst possible time.