A new book on interrogation during the Korean War sheds light on how the 20th century imagined prisoners of war.

Monica Kim’s new book, The Interrogation Rooms of the Korean War: The Untold History, shows how the conflict set the stage for a new kind of battle—not over land but over human subjects.

In this adapted excerpt, Kim, a professor of history at New York University, examines how the American cultural understanding of “brainwashing” took root around the experiences of U.S. prisoners of war in North Korea and China, their experiences following the cease-fire with the U.S. Counterintelligence Corps, and what happened when some of them chose not to repatriate to the United States.

Monica Kim’s new book, The Interrogation Rooms of the Korean War: The Untold History, shows how the conflict set the stage for a new kind of battle—not over land but over human subjects.

In this adapted excerpt, Kim, a professor of history at New York University, examines how the American cultural understanding of “brainwashing” took root around the experiences of U.S. prisoners of war in North Korea and China, their experiences following the cease-fire with the U.S. Counterintelligence Corps, and what happened when some of them chose not to repatriate to the United States.

During the Korean War, the prisoner of war emerged to eclipse the citizen-soldier as the dominant military figure in the American public’s imagination of war-making.

Take the story of Arden Rowley. According to his calculations, Rowley, a 23-year-old Mormon boy from the dairy farms and alfalfa fields of Arizona, had spent “32 months and 18 days” as a prisoner of war in Korea. On Aug. 22, 1953, Rowley boarded the USNS Marine Adder for a two-week-long journey from the port of Incheon to San Francisco. At that point, it had only been four days since the North Korean and Chinese communist militaries processed him for repatriation back to the United States, and he crossed southward over the 38th parallel through the village of Panmunjom. When a U.S. Army colonel greeted him hours after his release and asked him what he would like to eat, Rowley requested “a big bowl of ice cream.” And in Incheon, where the naval ships were docked, Rowley was able to purchase “American goods for the first time in more than three years.” But the pleasure of 1950s America through the taste of ice cream and display of goods was brief. Once he boarded the Marine Adder, Rowley “was told … to proceed to a certain room for … interrogation and knock on the door.”

“About three days after we were freed,” recalled Johnny Moore, another former POW, “we got on the ship. And thanks to the U.S. military, instead of flying us home as they should have, they took their own sweet time on the ocean, because they planned to interrogate us all the way across the ocean.” The U.S. military had indeed prepared for these extensive interrogations by conducting some strategic “carpentry work” on these ships, to use the words of the historian Raymond Lech in his book Broken Soldiers. “Numerous booths, about four by four, were constructed,” noted Lech, and each booth “contained a small field desk and two chairs.” In essence, ships like Rowley’s Marine Adder “became floating interrogation centers for the Counter Intelligence Corps (CIC) of the U.S. Army.” Michael Cornwell, one of the POW repatriates, said, “You could call what happened on the ship coming home debriefing or an interrogation, but it lasted all day long—some eight hours.” The soldier, who was supposedly a weapon of American warfare, had now become the target of American military intelligence. 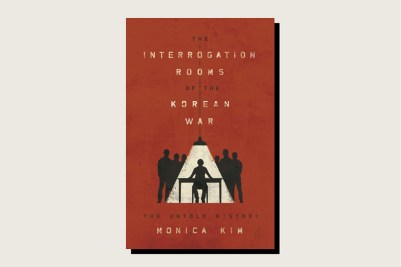 Arden Rowley was one of 4,428 U.S. prisoners of war repatriated from the Chinese and North Korean camps during the war. Eighty-eight percent of these men had been captured in the first year of the war, from July 1950 to June 1951, which meant that the majority of U.S. POWs had been living in the Chinese and North Korean POW camps for almost three years. Some of them underwent interrogation repeatedly. When these American POWs were released and found themselves in a U.S. military hospital in Tokyo or on a U.S. naval ship headed for San Francisco, they quickly discovered that repatriation simply marked a turning point—rather than an end—to the demand on them to narrate endlessly their lives and experiences. The U.S. military demanded of these men details, chronologies, and names of those who had been either “collaborators” or “reactionaries.” Agents of the Counter Intelligence Corps and the FBI followed these men far beyond the port of San Francisco. The entire apparatus of the U.S. national security state was mobilized on both sides of the Pacific to diagnose, survey, and punish a critical domain of American warfare: the domestic militarized psyche. And “brainwashing” became the lit match that exploded the tinderbox of American anxiety over being unable to control the meanings of a war that was not a war.

By the time Rowley and other American POWs crossed into the so-called Freedom Village, created by the United Nations to greet repatriating POWs on the 38th parallel, the phrase “brainwashing” had entered heavy rotation on the front pages of American newspapers, specifically in regard to the American POW. In April 1953, Neal Stanford, a correspondent for the Christian Science Monitor, published an article titled “Red ‘Teaching’ of Prisoners Stirs U.S.,” where he concluded, “It is therefore not entirely fantastic to believe that when a voluntary exchange of PWs in Korea is actually arranged, there may be some Americans, as well as thousands of Communists, who will refuse to be exchanged. … And it would present the United States with a most serious problem—how to insist on the ‘unwashing’ of any Americans who may refuse to be repatriated so they can make a free and honest decision of their own.” During that very same month, Allen Dulles, the director of the CIA, commented on the issue of “brainwashing” in a speech in front of Princeton University alumni: “The Communists are now applying the brainwashing techniques to American prisoners in Korea, and it is not beyond the range of possibility that considerable numbers of our own boys there might be so indoctrinated as to be induced, temporarily at least, to renounce country and family.”

That possibility became a reality with the signing of the cease-fire in July 1953, when 21 U.S. POWs announced that they had chosen to not repatriate to the United States and would instead stay in China at the close of the fighting on the battlefields.

The American POW, under the specter of what the U.S. military referred to as “Oriental” brainwashing, thus became a cipher for American unease about how the fast-moving backdrop of capitalism, the Cold War, and a decolonizing globe was challenging the seemingly assured coherence of the American individual self. Free choice in the liberal individualistic sense was both the beacon of light and the litmus test for the full expression of selfhood. According to the U.S.-proposed plan of POW voluntary repatriation presented at the armistice meetings, at the end of the conflict, a soldier would be able to “exercise his individual option as to whether he will return to his own side or join the other side.” In his argument, Adm. Ruthven Libby, the U.S. delegate, used phrases such as “principle of freedom of choice” and “the right of individual self-determination.” The United States had supposedly offered this choice to the Korean and Chinese prisoners of war and thereby cemented the POW voluntary repatriation proposal within a halo of U.S.-sanctioned redemption from which, if the POW elected the U.S.-backed states of the Republic of Korea or Taiwan, the Korean or Chinese POW could emerge as aspiring liberal subjects. On the other hand, the American citizen-soldier was a priori coherent, whole, and present on the stage of history. But how did that idea transfer if and when the American POW made a choice that rejected this premise?

When confronted with the 21 POWs who chose to stay in China—as well as reports that hundreds of American POWs had collaborated in some form with the Chinese and North Korean authorities in the camps—the U.S. military, government, and public had to neutralize these American POWs and the potential visibility of their politics by rendering them again as “vulnerable” subjects. “Brainwashing” became the term that grabbed the media spotlight—and absorbed the American public’s imagination when it came to comprehending what had happened.

In other words, to make sense of those who remained behind, these American POWs were painted as men who had essentially not made a choice and were instead victims of an “Oriental’ communist regime. Whether in the Hollywood film The Manchurian Candidate or Virginia Pasley’s 21 Stayed, the American POW of the Korean War was emblazoned publicly—with startling rapidity—as the symptom of a social malady, a national pathology, or an even deeper yet unidentified crisis of the United States.

The crisis over the POW during the Korean War would precipitate a formal reconceptualization of the nature of warfare. The “brainwashing” anxiety around the American prisoner of war laid bare that a basic tenet of U.S. imperial warfare vis-a-vis the global order had been challenged: The United States was supposed to be the power that transformed the enemy in wartime encounters, not the other way around.

Monica Kim is assistant professor of history at New York University and author of The Interrogation Rooms of the Korean War.

The U.S. president will press his counterpart for more tangible commitments to dismantle nuclear weapons.

Give Peace With North Korea a Chance, but Remember Plan B

U.S. to Ease Limits on Humanitarian Aid to North Korea