More than 600,000 Africans fought for Britain in World War II. Now they want a fair deal.

By the end of World War II, Eusebio Mbiuki had faced deadly combat in the jungles of Burma and survived fearful ocean crossings stalked by submarines. But even as the young Kenyan put his life on the line for Britain, he—and more than half a million other African soldiers drawn from the empire—faced harsh discrimination from his own side.

Britain paid its soldiers not only according to their rank and length of service but also their ethnicity, a new documentary for Al Jazeera English has found, with black troops receiving a third of the pay of their white contemporaries of the same rank. Some Africans were forcibly and secretly conscripted, while others were beaten by their superiors. Many ended up in poverty. The revelations have led senior opposition politicians to call on the British government to make an official apology, to launch an investigation, and to compensate the last surviving veterans affected by this controversial policy.

“There must be an urgent inquiry into Britain having paid its African and Asian soldiers according to the color of their skin,” said Jeremy Corbyn, the Labour Party leader, following the revelations.

“When I got out, they gave me nothing,” said veteran Eusebio Mbiuki, now 100 years old and living in poverty in rural Kenya. “…We were abandoned just like that.”

During World War II, Britain recruited some 600,000 African men to fight against the Axis powers, from the Italians in the Horn of Africa to Vichy French forces in Madagascar to the Imperial Japanese Army in Burma, now known as Myanmar. But when the fighting was over, Britain sent these men back home with an end-of-war bonus that was roughly a third of the reward given to their white counterparts, even those from settler communities living in the same African colonies.

“When I got out, they gave me nothing,” said the Burma campaign veteran, Mbiuki, now 100 years old and living in poverty in rural Kenya. “They should have known how much we had helped them. They would have given something. But that was not the case. We were abandoned just like that.” 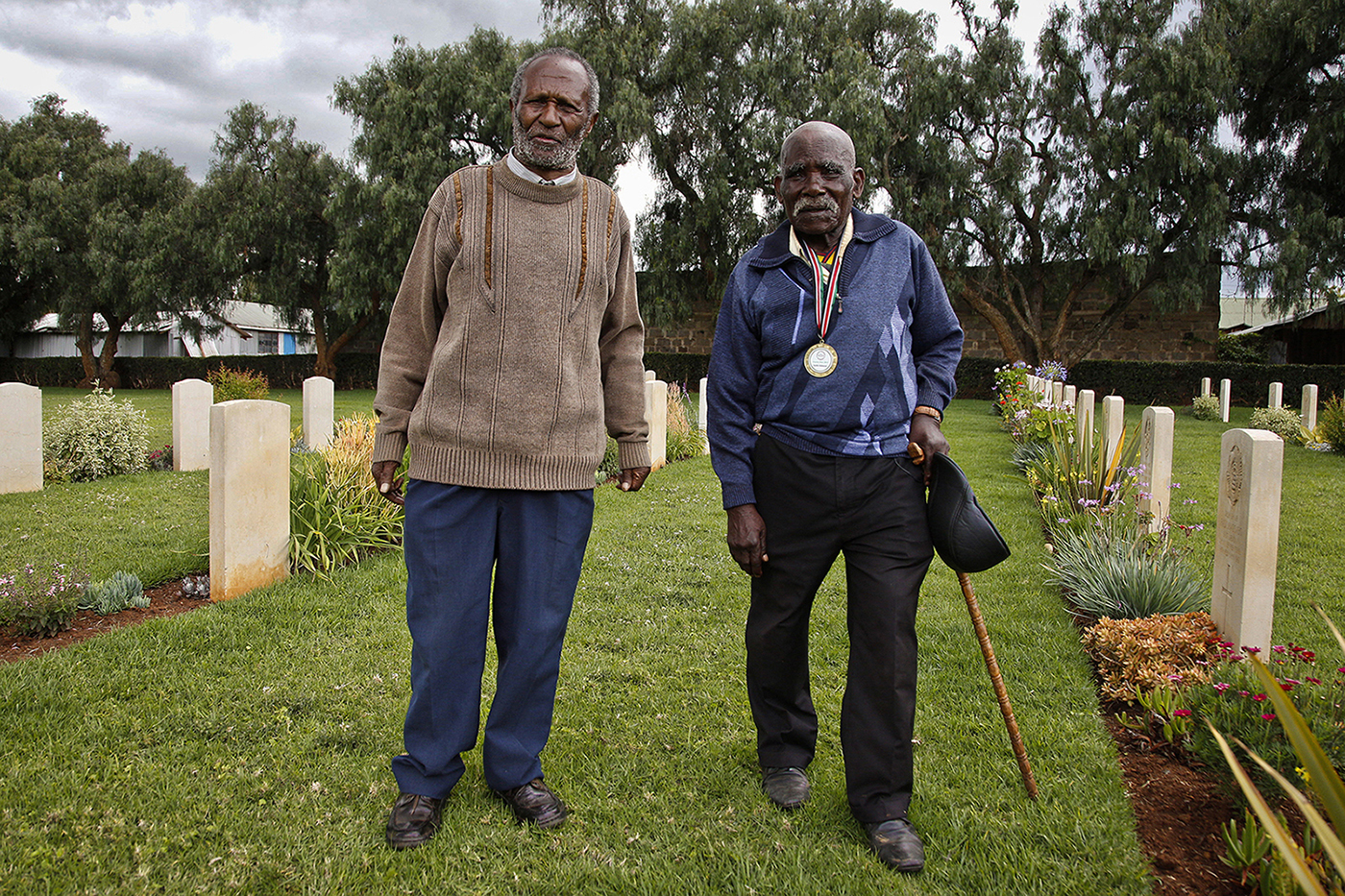 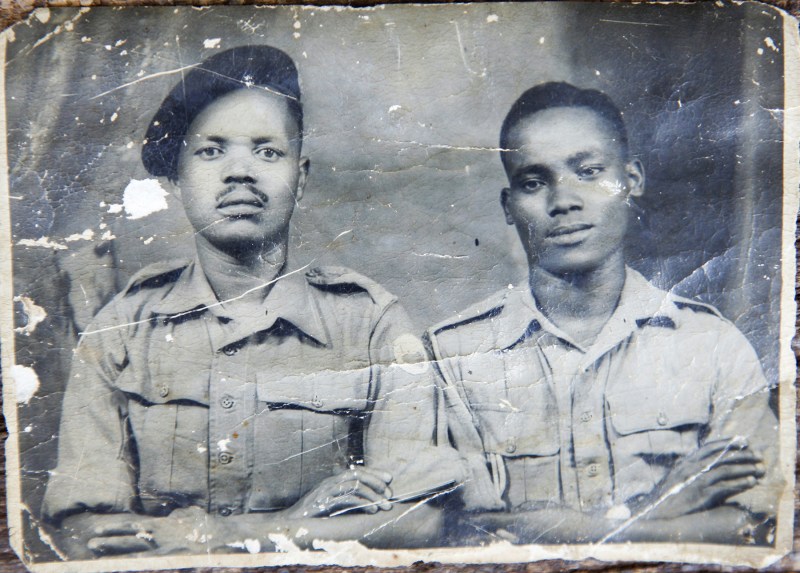 One tactic that the United Kingdom used to recruit African soldiers was propaganda, warning that Hitler wanted to seize their land—land that had already been colonized by the British themselves. “We did not know who Hitler was,” said Mbiuki, seen here on the left when he was a soldier in the 1940s. “We didn’t know anything about him. We didn’t feel very good about him. We thought this Hitler would come and drive us from our lands.” (Jack Losh for Foreign Policy)

This is not the first time that the British government has been accused of discriminating against solders drawn from its former empire. In 2009, Gurkha veterans—former servicemen of Nepalese ethnicity who had fought for Britain—won the right to settle in the United Kingdom after a High Court battle.

The British government’s response to the new revelations regarding the prejudice and mistreatment of its African soldiers has so far been muted and contradictory, with officials refusing to engage with the issue publicly.

On Monday, Britain’s Foreign Office told Foreign Policy that the Ministry of Defense was taking a lead on the matter. But while responding to questions in Parliament, a defense minister in Prime Minister Theresa May’s administration claimed that Foreign Office staff were in charge.

“This is a Foreign Office lead, and I hope they will be able to provide more detail on how we move forward,” the Conservative minster, Tobias Ellwood, stated incorrectly. He refused to give any more information on the government’s plans to make amends but did describe the issue as “very important” and “something that the secretary of state is also aware of.” Britain’s secretary of defense, Gavin Williamson, has faced criticism for his silence over the issue. 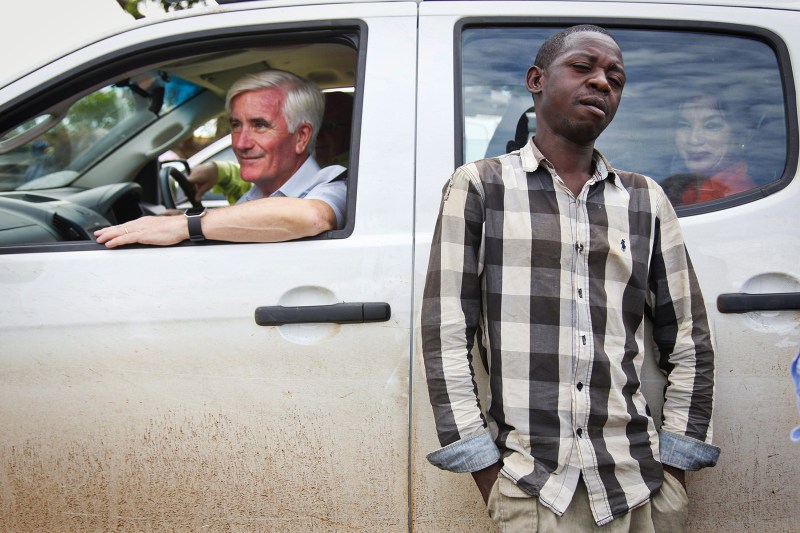 A Zambian man leans against a car carrying various British officials and former servicemen to the last African battleground of World War I on the Chambeshi River in northern Zambia on Nov. 24, 2018. (Jack Losh for Foreign Policy) 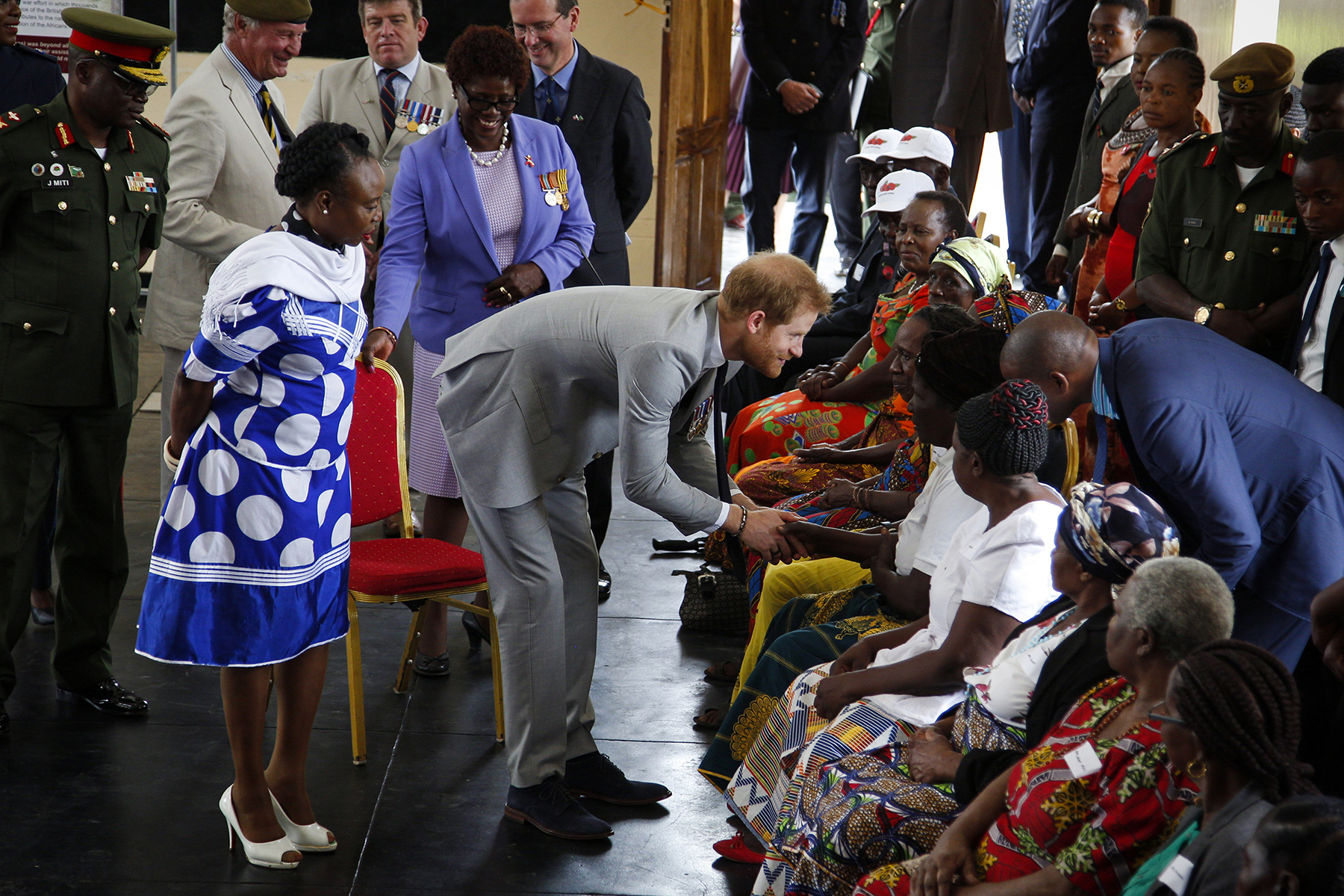 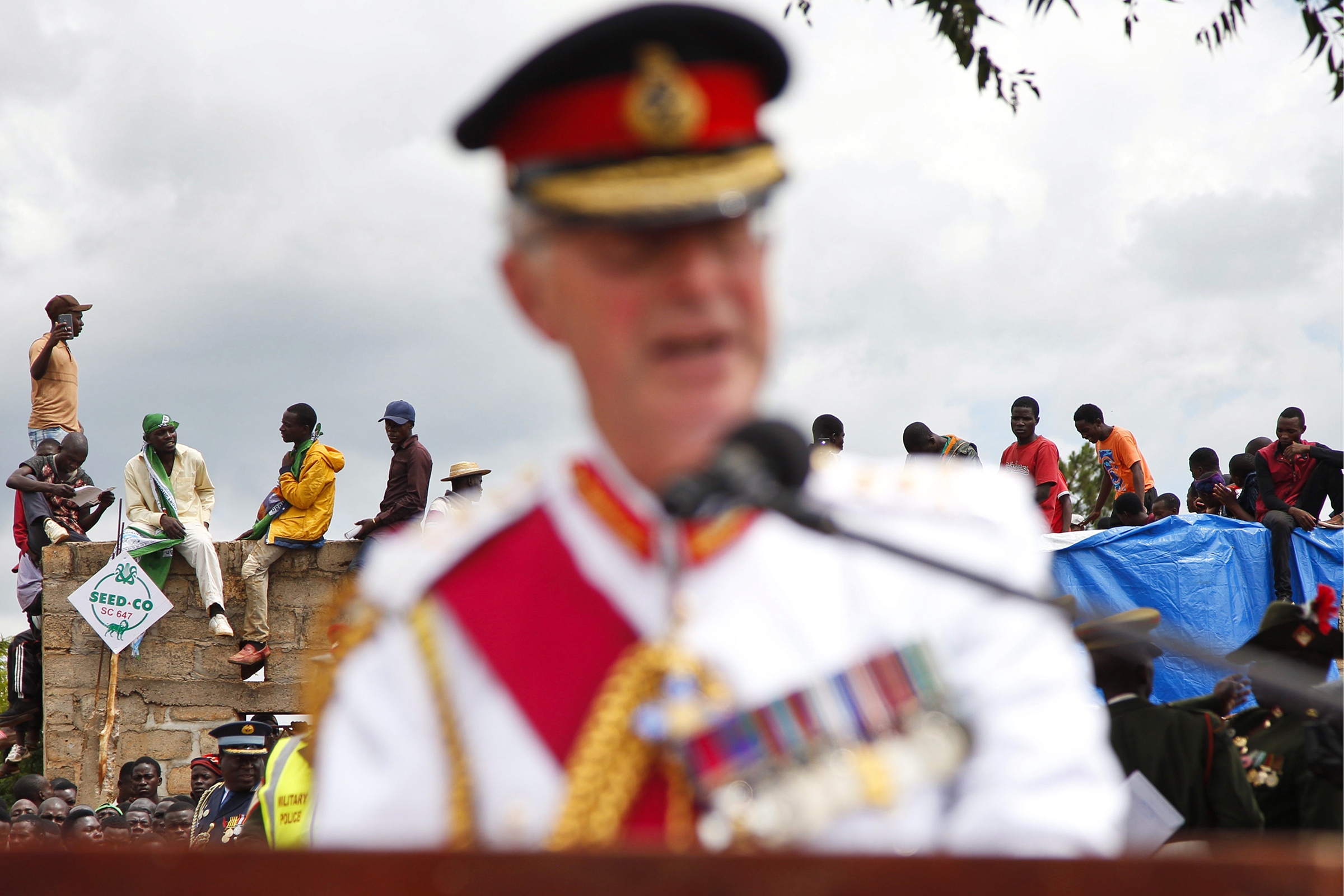 Local men climb onto a building to get a view of the Armistice Day memorial event in Mbala, Zambia, as the former chief of the U.K. armed forces, retired Gen. David Richards, gives a speech on Nov. 25, 2018. Paying tribute to Britain’s colonial-era African forces, he said: “They were brave and loyal soldiers of Christian, Muslim, or no faith, who volunteered to serve the British Crown and were, in most cases, fighting far from home.” (Jack Losh for Foreign Policy)

“The fact that Gavin Williamson has refused to comment on this is despicable,” said Labour’s Preet Gill, the shadow international development minister. “It is absolutely disgraceful. It doesn’t honor the men that are alive. What message does it give to them? That the government doesn’t care, that the defense secretary doesn’t give a damn, that you served your time and that’s it.”

Besides the issue of unequal pay, the documentary features testimony from African veterans who endured corporal punishment. The British Army abolished such practices decades earlier but allowed such abuse to persist in its colonial formations until after World War II. “Our bodies became so swollen from the beatings,” Mbiuki said. “They would beat us and slap us until you accepted everything you were being told.”

In July 1940, the U.K.’s East African Force had lobbied for commanders to have authority to order corporal punishment as summary punishment, saying: “For the punishment of African natives to be effective, it is essential that it should follow immediately upon commission of the offence. Their memories are short, with the result that delayed punishment is resented, and is clearly connected in their minds with a specific offence.” The public flogging of African soldiers for petty crimes—illegal in the main British Army since 1881—led to a formal complaint in 1943 from an English-born missionary, with threats to go public with allegations of “sadism.” Such abuse was not formally abolished in Kenya until December 1946 but was still permitted in military prisons until April 1948.

While the majority of the men were volunteers, many were forcibly conscripted. During the war, colonial officials were desperate to raise troop numbers so would often urge local chiefs to find them men, whatever the cost. This resulted in African men being sent to the firing line against their will. Grace Mbithe, a 94-year-old widow living in the highlands near Nairobi remembers how one press gang snatched her husband from their village and sent him off to North Africa. “Where could you hide? It would just happen suddenly, one morning,” she said. “If you hid, they would just come back another day. We cried a lot when we heard he’d had been captured.”

Her husband did eventually return but was profoundly traumatized by the horrors of war. 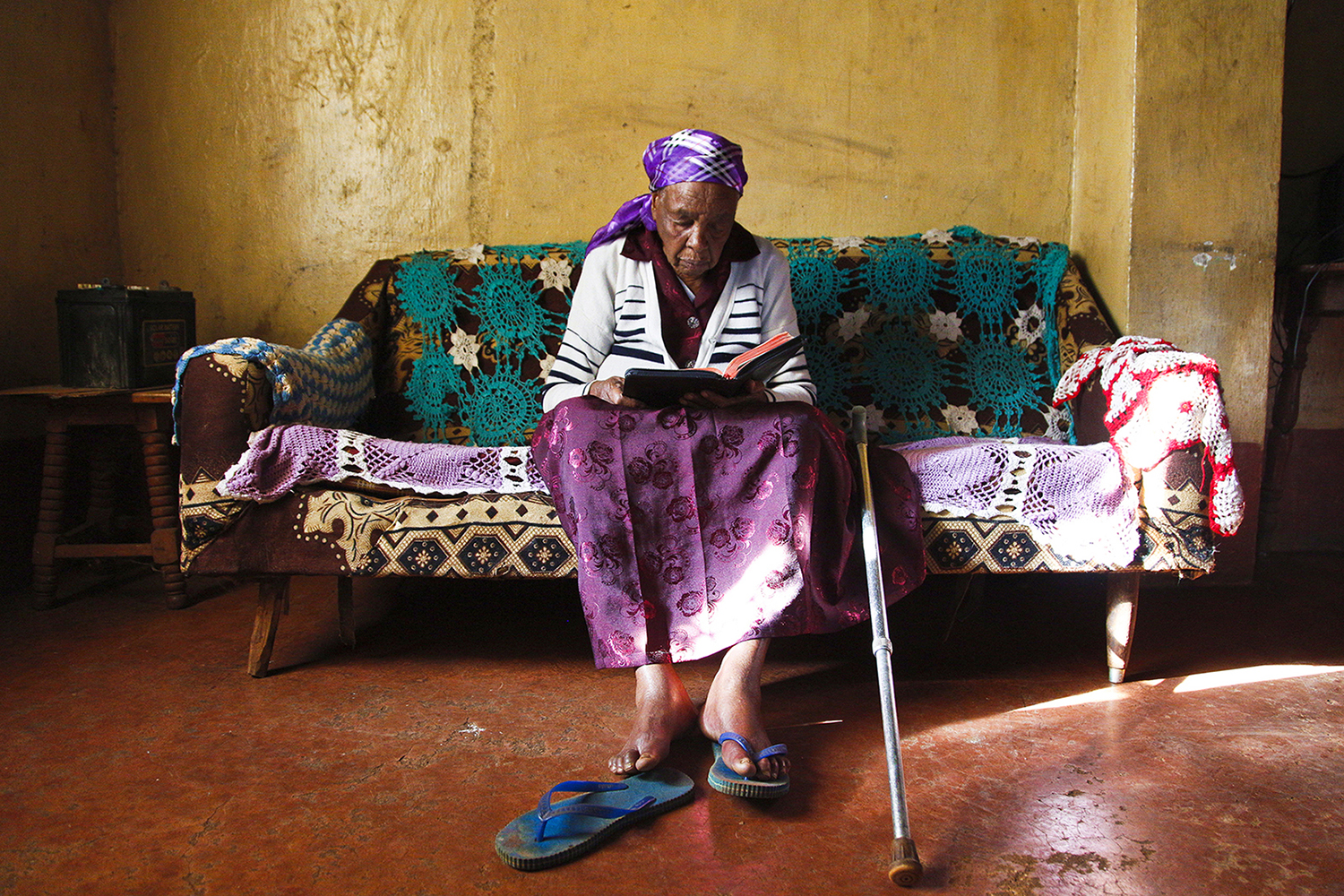 Grace Mbithe, a widow in her late 90s, reads her Bible in her home in the Kenyan highlands on Nov. 16, 2018. Her husband, Stanley Muli, was forcibly recruited into Britain’s colonial army and returned from service in North Africa deeply traumatized by the horrors of combat. (Jack Losh for Foreign Policy) 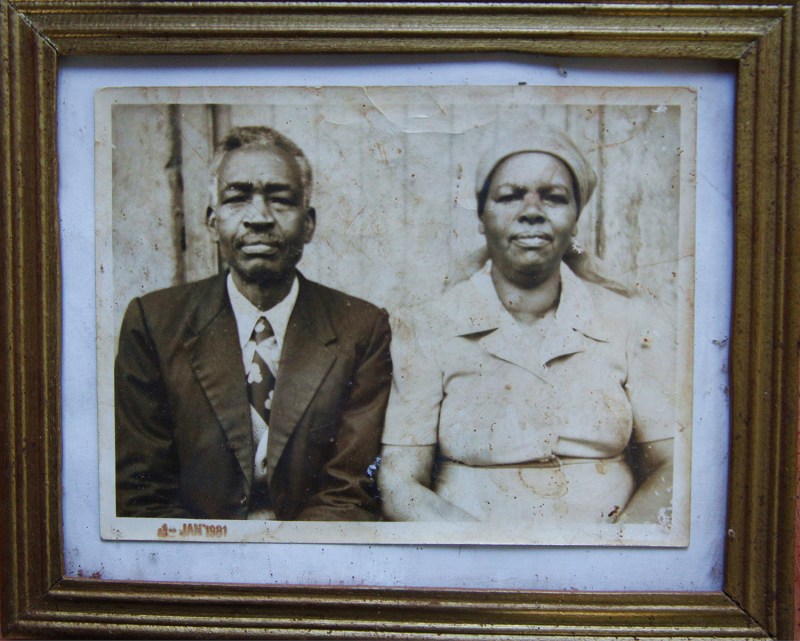 “He came back unwell. That illness killed him,” said Grace of her husband, Stanley, shown in a photo from 1981. During rainstorms, she said, he would get out of bed and stand outside, unable to bear the thundering sound on their corrugated metal roof. “It would rain on him over and over again, while his heart beat faster and faster. He had a bad heart, and that’s what killed him.” (Jack Losh for Foreign Policy)

Rates of war gratuities were starkly different for white and black soldiers. A white private could earn 10 shillings for each month of service; for a black soldier of the same rank, just 3½ shillings. White corporals would get 12 shillings per month of service; for black corporals, just 4 shillings. Fearing any threat to the racial order, Britain barred its African soldiers from reaching higher ranks during the colonial period. The most senior position open to them was “warrant officer class 1,” which could earn them a war gratuity of six shillings per month of service, 30 percent of the sum on offer to white officers of that class. Stringent rules governing Britain’s colonial forces also prohibited these more senior African soldiers from disciplining lower-ranking white troops. Even higher-ranking black soldiers were expected to address the lowest white private as “sir.”

While the majority of the men were volunteers, many were forcibly conscripted.

Irrespective of rank, Asian personnel recruited in British East Africa all earned 7½ shillings for each month of enlisted service, less than their white comrades and more than their African ones—a reflection of the racial hierarchy that imperial Britain had enshrined in its colonies.

In contrast to official state policy, however, some individual officers retained a sense of obligation toward their African comrades, lobbying the government to provide these marginalized soldiers with pensions and demanding that they not be cheated out of fair pay. “British officers commanding African troops were often quite unsympathetic to the interest of the colonial state,” said Timothy Parsons, a professor at Washington University in St. Louis and one of the world’s leading authorities on Britain’s East African army. 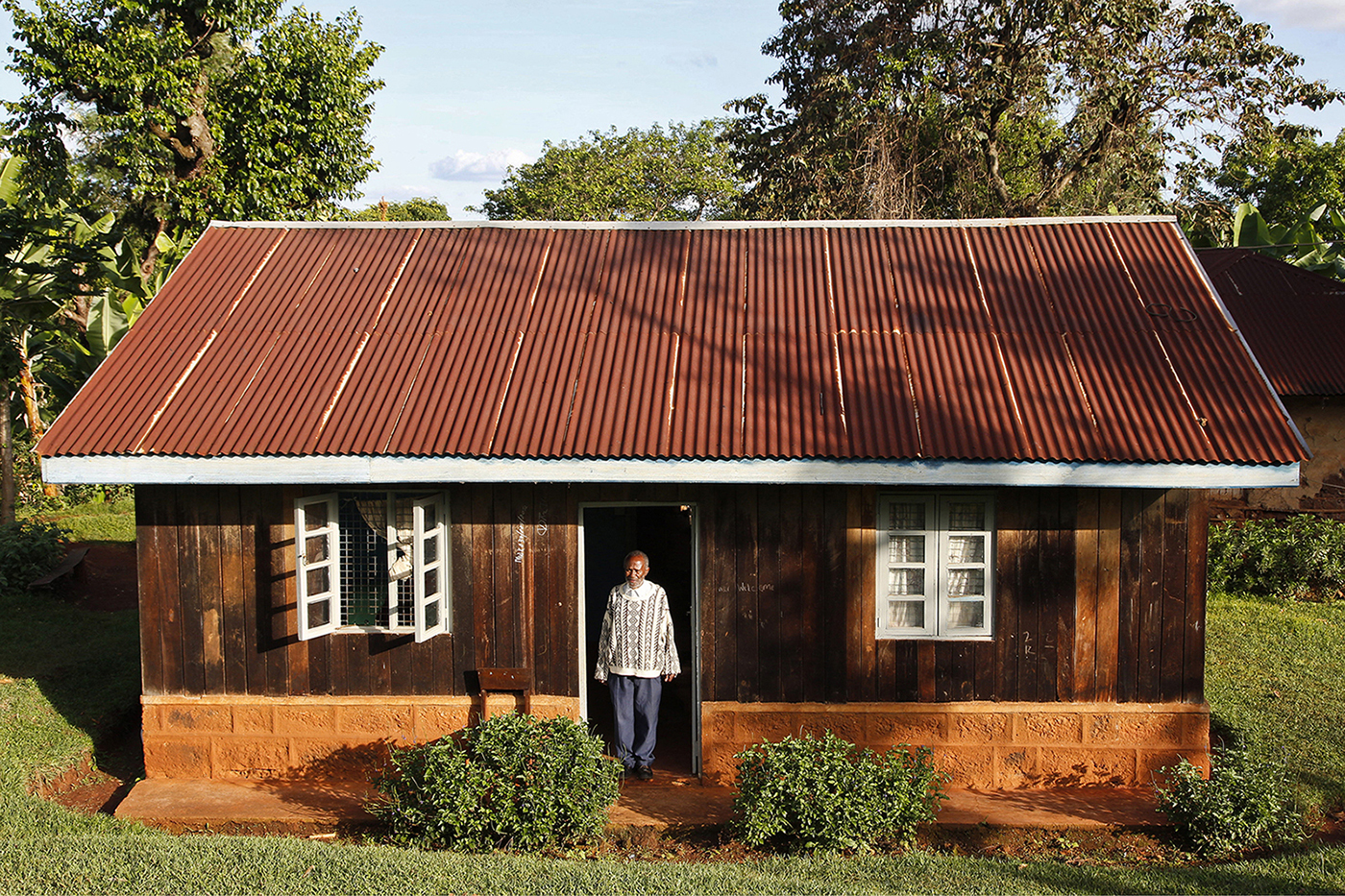 Gershon Fundi, a former signalman who served in Ethiopia and Somaliland during World War II, rests in the doorway of his home in the highlands of Kenya on Nov. 20, 2018. “I pray for those dead,” he said, “and I don’t know why I’m still alive for all those years.” (Jack Losh for Foreign Policy)

A government spokesperson refused to comment specifically on any of the allegations. “The U.K. is indebted to all those servicemen and women from Africa who volunteered to serve with Britain during the Second World War. Their bravery and sacrifice significantly contributed to the freedoms that we all enjoy today,” the spokesperson said.